Friday Links on a Monday Afternoon

ChangeThis preparations and office birthday celebrations kept me from posting links on Friday, so I thought I'd remedy that by rustling some up for y'all this afternoon. ➻ "I saw the best minds of my generation destroyed by madness. " So begins Allen Ginsberg's "Howl.

ChangeThis preparations and office birthday celebrations kept me from posting links on Friday, so I thought I'd remedy that by rustling some up for y'all this afternoon. "I saw the best minds of my generation destroyed by madness." So begins Allen Ginsberg's "Howl." I was reminded of those words last week while reading Ashlee Vance's feature in Bloomberg Businessweek on why This Tech Bubble Is Different. She interviewed Jeff Hammerbacher, a math genius from Harvard who ended up at Facebook one year out of college.

Hammerbacher looked around Silicon Valley at companies like his own, Google , and Twitter, and saw his peers wasting their talents. "The best minds of my generation are thinking about how to make people click ads," he says. "That sucks."

You might even say it's madness. To be fair, though, a lot of the best minds of our generation are quants on Wall Street—something Hammerbacher also did for a time.

So, why is This Tech Bubble ... Different? Let's look at the extremes: It may cure cancer, and it has produced the fastest growing company of all time—a company whose "legacy is cute e-mail." (It will make more sense once you've read the article.)

Beside curing cancer and perfecting the art of the cute email, "Silicon Valley execs, entrepreneurs, and activists are helping advance America's overseas goals through technology." E.B. Boyn and Rachel Z. Arndt interviewed a number of these folks about "techplomacy" for Fast Company's May issue. They include:

Jason Liebman, telling the story of his organization's beginnings, talks about an unlikely inspiration: "In 2007, coalition forces found an Al Qaeda manual on how to be a terrorist. We said, 'Hey, let's create an alternate manual to use tools to promote nonviolent social change.'"

Michael Totty asked three experts for help Making Sense of It All: Getting Knowledge From Information. They each gave him a recommended reading list on "how businesses can harness technology to make the most of information." Amit Basu, the Carr P. Collins chair in management information systems at the Cox School of Business at Southern Methodist University, chose The Adventures of an IT Leader by Robert D. Austin, Richard L. Nolan and Shannon O'Donnell, and The Black Swan: The Impact of the Highly Improbable by Nassim Nicholas Taleb. Thomas H. Davenport, the president's distinguished professor of IT and management at Babson College, recommended some very distinguished and cerebral texts in The Social Life of Information by John Seely Brown and Paul Duguid, and Making the Invisible Visible: How Companies Win with the Right Information, People and IT by Donald Marchand, William Kettinger and John Rollins. All good books to my knowledge—meaning I haven't read any of them, excepting Taleb's tome. Nilofer Merchant, the author of The New How, chose books that I know well and would definitely second for recommendation:

I've been trying to tell people how important Lisa Gansky's book is since it was published, and it seems Ms. Merchant agress. She writes:

This is an important book, in that Ms. Gansky helps us name an important trend that will shape our culture—and therefore our technology products—over the next several decades. She argues that the companies that will win will be the ones that enable sharing, via community participation and trust.

To get the summaries of the other recommendations, head over to Michael Toddy's piece in the Wall Street Journal. (Tip of the hat to Portfolio Javelin for the story.)

Between the Lines' Peter Cox and Jamie Mollart interviewed Seth Godin in April about The New Face of Publishing (and, of course, about his new publishing venture, The Domino Project). Comparing how the Internet and mp3 files changed the music industry to what may be around the corner for publishing, he says:

I am certain that a similar fate lies in the future of the book industry. We are re not going to necessarily read less. I think we are probably going to chop down fewer trees. But one thing I'm sure of is that the nature of publishing—which is based on scarcity and based on ... a top-down, corporate risk-taking mindset—is going to be replaced, as the Internet replaces everything, with one that's based on connection and abundance. And what we are trying to do with the Domino Project is experiment and fail and demonstrate some lessons. So, hopefully, people will copy our ideas because I firmly love books and I hope that they thrive for another 500 years.

I agree with that last sentiment. I plan on living until I'm 547 years old (so far, so good) so I can catch up with everything on my current reading list, but hope I'm still able to pick up a few new releases and new ideas in 2483.

And how do we filter all of the information that continues to be published? Well, it turns out that what Eli Pariser has termed The Filter Bubble is doing some of that work for us already, and it may be doing a poor job of it. Speaking of the Internet (and how it's being tailored to our preferences) at this year's TED conference, he said:

I was sure that it was going to be great for democracy and for our society. But, there's this kind of shift in how information is flowing online, and it's invisible, and if we don't pay attention to it, it could be a real problem. I first noticed this in a place I spend a lot of time—my Facebook page. I'm progressive politically (big surprise), but I've always gone out of my way to meet conservatives. I like hearing what they're thinking about, I like seeing what they link to, I like learning a thing or two. And so I was kind of surprised when I noticed one day that the conservatives had disappeared from my Facebook feed. And what it turned out was going on was that Facebook was looking at which links I was clicked on, and it was noticing that, actually, I was clicking more on my liberal friends links than on my conservative friends links. And, without consulting me about it, it had edited them out—they disappeared. Facebook isn't the only place that is doing this invisible, algorithmic editing of the web. Google is doing it to. If I search for something and you search for something—even right now, at the very same time—we may get very different search results. Even if you're logged out, one engineer told me, there are 57 signals that Google looks at—everything from what kind of computer you're on, to what kind of browser you're using, to where you're located—that it uses to personally tailor your query results.

The problem with this, as Pariser sees it, is that "you don't actually see what gets edited out" or get a "balanced information diet." He goes on to explain how we've gone from human gatekeepers of information to algorithmic ones, and how we need the new gatekeepers to encode in their algorithms "a sense of the public life" and "a sense of civic responsibility."

The Filter Bubble is due out next week. 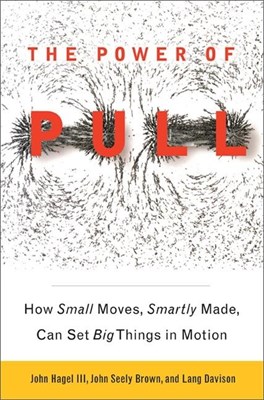 The Power of Pull: How Small Moves, Smartly Made, Can Set Big Things in Motion 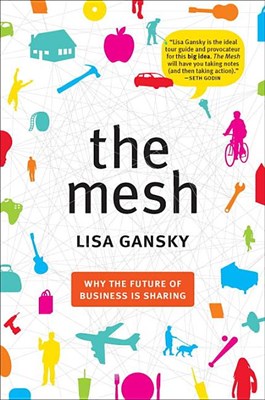 Mesh: Why the Future of Business Is Sharing