We were discussing the new Google eReader via email here last week, when Roy replied with the following: Big Shock: Roy has never used Google anything. I think it's a government conspiracy. Happy Tuesday!

We were discussing the new Google eReader via email here last week, when Roy replied with the following:

Big Shock: Roy has never used Google anything. I think it's a government conspiracy. Happy Tuesday!

Now, I don't know that Roy thinks it's literally a government conspiracy, but I do know that he is concerned, as many are, about one company having that much knowledge of, access to, and control over our personal information—even if that company's unofficial motto is "don't be evil." I use Google for many things, so they could potentially know a lot about me if they wanted to. And, while I'm somewhat wary of that, and worry about the issue of privacy in general online, I don't think it's a conspiracy to gather information on us. (Though, if it were a government conspiracy to do so, would that better or worse than if it were a corporate conspiracy? And what if it is a government conspiracy, but not of the United States government. What if it's a conspiracy of the city council of Mountain View, California being led by Councilmember John Inks. We're on to you, Inks!)

All that said, if Roy is concerned about Google's effect on our privacy specifically, or culture in general, I think he is right in his decision not to use it. He's just casting his vote. Pre-Internet, we mostly voted with our pocket books for businesses, charities, churches, etc. That was what determined our communities. Yes, there were generational movements in which people voted with their feet and collective voices on specific topics such as civil rights and women's suffrage that were paradigm shifts in our history, and we've always gone to the polls to elect our representatives in government, but our everyday votes for which businesses to support with our hard-earned dollars was the driving force of our everyday lives and communities. With Google and so many other companies on the Internet, we're now voting with our fingertips, with our behavior and usage online, and if one is wary of Google monopolizing our information or our online lives, the only way to vote against it is to not use it—not use their search engine or email, document or picture hosting, reader or calender. Or, if one doesn't like Facebook's privacy or copyright policies, the only way to not condone them is to leave Facebook.

Personally, I am more concerned about how the internet is affecting public knowledge in general, and my brain in particular. Nick Carr tackled these issues in his 2008 Atlantic article, Is Google Making Us Stupid? He addressed it further, quite brilliantly at book length, last year in The Shallows, and he touched upon the topic again recently after the release of a study in Science. From his post about how Google is creating Minds like sieves:

The study, "Google Effects on Memory: Cognitive Consequences of Having Information at Our Fingertips," was conducted by three psychologists: Betsy Sparrow, of Columbia University; Jenny Liu, of the University of Wisconsin at Madison; and Daniel Wegner, of Harvard. They conducted a series of four experiments aimed at answering this question: Does our awareness of our ability to use Google to quickly find any fact or other bit of information influence the way our brains form memories? The answer, they discovered, is yes: "when people expect to have future access to information, they have lower rates of recall of the information itself and enhanced recall instead for where to access it." The findings suggest, the researchers write, "that processes of human memory are adapting to the advent of new computing and communication technology."

I'm not suggesting anyone stop using the great tools that Google provides. I'm not going to stop using Google anytime soon. In fact, even though I'm usually a late adopter of new technology and social networks, I've even been tinkering around with Google+ a bit. But I do think there are a lot of things to to consider when we bring new technologies into our lives—especially addictive technologies like television and social networking sites, and technologies we use as a mental crutch like search engines or Google maps. We should be mindful of what we're adopting into our lives, how we're doing so, and how it's affecting us. Like everything in a democracy, the onus is on us to stay informed of the issues and cast our vote. And there are a great number of books on these topics, covering the nearly miraculous strides being made in information technology and some of the side effects of those advances. Some pertinent to the story of Google include: Just as we monitor the nutritional value of what we eat, we should remain vigilant in monitoring our intellectual intake. And, these books all look at the larger issues of how Google is affecting our lives and society, serving as the "nutritional facts" of our intellectual diets. 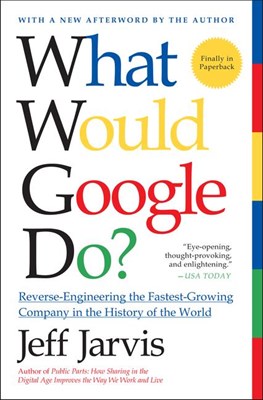