The 2022 Innovation & Creativity book of the year is Inspired by Matt Richtel, published by Mariner Books.

Matt Richtel looks realistically at how creativity evolves across industries and across time, and how it is tied to our humanity. What he clearly shows is that creativity cannot exist in a vacuum. Creative ideas and humans are built on the shoulders of the generations that have come before them, and their characteristics depend on adapting to the conditions of their environment.

The following excerpt comes from Book I: From Crade to Muse, “Wherein a visit to Jerusalem and a chance meeting with the Kangaroo Man provides a profile of a creator but reveals creativity’s mortal foe, doubt.” 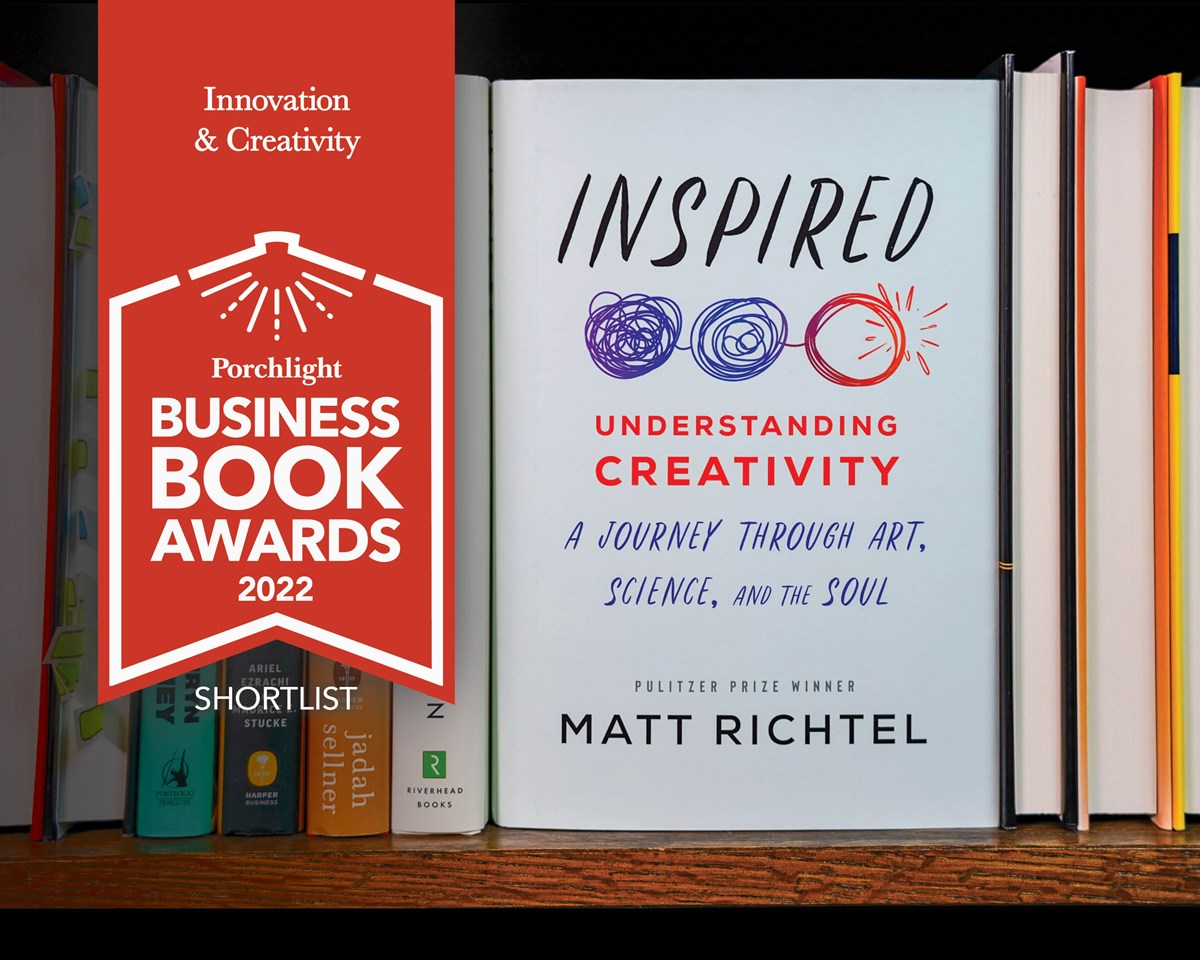 “King Herod was the Steve Jobs of his time.”

The day after Thanksgiving 2019, I stood in the Jewish quarter of the Old City of Jerusalem. One week earlier, in Wuhan, China—4,500 miles away—the first known human being became infected with the virus caused by COVID-19. But that morning for me had a blessed feel, sun-bathed, unusually temperate. The “city of peace” felt calm, subverting an underlying turmoil of the world poised to surface and explode.

The square hummed with a throng of tourists, city dwellers, the pious. Devout Jews and Christians coursed across the cobbled stones to holy places. Around only a few narrow corners hustled too the Arabs and Armenians who also consider this place a portal to the heavens.

Where better to consider the source of human creativity than in a city many believe central to all of creation itself?

My guide, Amy, pointed to stones beneath our feet that the king laid more than 2,000 years ago. They were part of an empire-building mania led by this Roman-appointed ruler, streets that led to ports, fortresses, new ideas for gates and military defenses. Amy tells me he was “a man who thought larger than life”: Herod the Great.

He could also have fairly been called Herod the Vicious Paranoid Killer. He was a terrible person, a madman who ordered the murder of children and his own allies. It was all part of his conniving effort to hold on to power, his inspirations yielding the great and the evil.

His prolific creation was doubtless inspired by his surroundings and his peers. Judea around the year zero thrived with restless energy, competing ideas, cultures clashing. It drew half a million people, a significant population by even today’s standards. This is key, it turns out. Throughout history, there have been outposts of explosive innovation, hot spots of creativity, cooperation, and fierce competition: Florence, Harlem, Athens, Morocco, Paris, extraordinary periods in Russia, Mali, Japan, China, India, Mexico, and Egypt, in Silicon Valley, Hollywood, and, certainly, Jerusalem. It was the ultimate company town, and the industry was religion.

A mythology has developed surrounding the image of the anti-social, isolated creative genius. It is among many misconceptions I began to see, little heresies, shorthand fables and narrative conveniences baked into the story of creativity. This book seeks to clarify the record, and this opening chapter is an overview into, and a down payment on, the science and story I will use to support a different view.

Population-level research, for instance, tells us that what gets created appears to come through a collective energy. Picture the teeming hub of ancient Jerusalem—Jews, early Christians, Romans—gathering, sharing, arguing; the ideas and energy gaining steam, then being poured out through an individual. Some person became a portal, a wellspring, a channeler, a veritable winged sage transcending the monotony of learned behavior and accepted technology.

Created here, the greatest stories ever told, if readership numbers are any guide.

A mere stone’s throw from where I stood with the tour guide are rooted the origin stories of Judaism, Christianity, Islam. Here, we learn from the New Testament, Christ carried a cross to his death, and burial at the site of the Church of the Holy Sepulchre. The golden mosque that looms over the city houses the Dome of the Rock, among the holiest sites for Muslims, where Mohammed in a dream flew on a white steed named Burāq to a spot that Muslims—and Jews and Christians—consider the “foundation rock” of the Earth. It was on this jagged opening, the beloved narratives have it, that our human story began.

And just below the Dome of the Rock stands the Wailing Wall, as holy a remembrance as there is in all of Judeo-Christian storytelling. The wall, reaching skyward as men and women bow before it, was the western edge of a temple which, the stories tell us, held the Ark of the Covenant. The Ark has been lost, last seen thousands of years ago.

As I looked around the square, I could see one extraordinary creation after the next. Like the Bible, the city has stood a rugged test of time—and seemingly every image testifies to the underlying force of creativity to, in fact, define the human experience.

I pulled out my iPhone, itself a wonder I held in my hand: a camera nearly as powerful as any that has ever existed, attached to a computer processor to rival those that took up entire rooms only several decades ago (the “supercomputers” that we marveled at because they could play a solid game of tic-tac-toe against a human foe). This phone would become an enabler of my own invention, helping me to remember, many months later, what I would write here. Material creations like these serve us as tools, emboldening creation and helping us create the building blocks and stones of the next innovation. In some ways, the even more powerful creations are the spiritual ideas that emerged in places like Jerusalem—and at sites in India, China, France, Germany, and on and on. They have a virtually cosmic role: They shape our reality.

Such is the power of creativity that it forms and re-forms our very understanding of the world. Creativity is, in this way, the true first wonder of the world. From it springs everything else.

This makes creativity seem so grand, elusive, the stuff of legendary thinkers in historic places. But King Herod didn’t build Jerusalem any more than Steve Jobs built the iPhone. Their creative contributions and ideas resulted from centuries of innovation, made in increments by the inspired. This shouldn’t seem particularly revelatory. More compelling, though, is why this is so: Creativity lives inside each of us and, collectively, we create our world.

It is not, as many have come to believe, the province of the few, another well-traveled misconception. Creativity is, in fact, part of our more primitive physiology. It comes from the cellular level, part of our most essential survival machinery. We are creativity machines.

Excerpted from Inspired: Understanding Creativity: A Journey Through Art, Science, and the Soul.
Copyright © 2022 by Matt Richtel. All rights reserved.

Matt Richtel has been a reporter at The New York Times since 2000. He won the 2010 Pulitzer Prize for National Reporting for a series that exposed the pervasive risks of distracted driving and its root causes, prompting widespread reform. He is the author of the national bestseller An Elegant Defense, which has been hailed as “vividly told” (Jerome Groopman, NYRB), “extraordinary” (Douglas Preston), “deeply affecting" (LARB), "thorough, richly entertaining, and just-wonky-enough" (Wall Street Journal), and “thrilling” (USA Today). His previous book is A Deadly Wandering, which The New York Times Book Review declared, “deserves a spot next to Fast Food Nation and To Kill a Mockingbird in America’s high school curriculums”; it was named a best book of the year by the San Francisco Chronicle, Christian Science Monitor, Kirkus Reviews, and Winnipeg Free Press. He has appeared on NPR's Fresh Air, PBS Newshour, and other major media outlets. He lives in San Francisco, California. 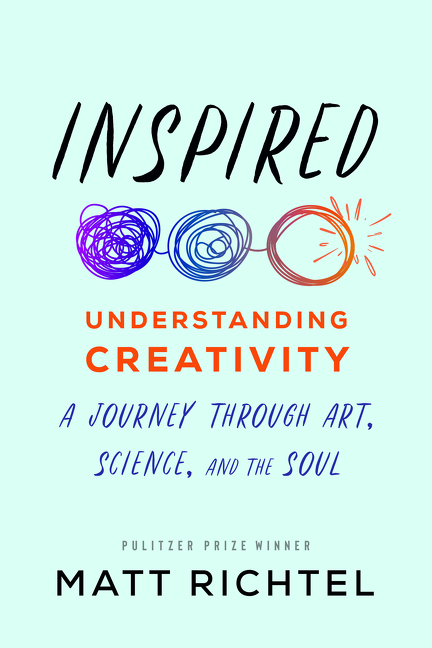