I had a conversation yesterday with the general manager of our sister company about Web 2. 0 that got me thinking. The conversation actually began as a fascinating look at the world of pens and ink color, but that, like many conversations seem to these days, led us to a discussion of Web 2.

I had a conversation yesterday with the general manager of our sister company about Web 2.0 that got me thinking. The conversation actually began as a fascinating look at the world of pens and ink color, but that, like many conversations seem to these days, led us to a discussion of Web 2.0. One minute we were talking about the psychological effect of editing in red ink (we're both pro), and then all of the sudden we were talking about the blogosphere and Web 2.0's lack of a red pen. And that is what got me thinking. The new web can, and already has been used to advance human knowledge and innovation. It is where Web 2.0's red pen exists; in its open source communities where people are constantly improving their own and other's work. We haven't discussed Wikinomics since January, but it is a great book, and is even a semifinalist for the Financial Times and Goldman Sachs Business Book Award. The culmination of five years and $9 million of research, Don Tapscott and Anthony Williams broaden the conversation beyond the social aspects of the new web, and discuss how open source networks, mass collaboration, and peer production are being used to advance science, improve business, and can be used to innovate in almost any field. They point to the human genome project, Innocentive, and IBM's collaboration with Linux's open source community as examples. To counter criticism that this collaboration doesn't translate into anything of economic value, they note that:

Linux-related hardware and services produce billions of dollars of revenue annually, and now IBM, Motorola, Nokia, Philips, Sony, and dozens of other companies are dedicating serious resources to its development.

That's one example out of many in a book that argues Web 2.0 does add real value to the economy. They also believe open source networks may allow more companies to enter the economy, adding value and innovation when they do.

Open source application vendors could be the force that brings affordable enterprise solutions to the masses of business that could never afford an Oracle database or an enterprise resource planning (ERP) system from SAP. And who knows, they just might empower a whole new revolution in business productivity, and perhaps even kick-start a renaissance for the small and medium sized business.

The amount of ground covered in this book is staggering. I'd highly recommend it to anyone interested in the intricacies of the conversation about Web 2.0. It gives some hope that mixed in with all the inane content and noise of what some call "the new industrial revolution" is something of real value for all of us. 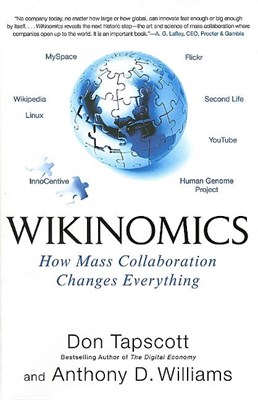 Wikinomics: How Mass Collaboration Changes Everything