In the lead up to announcing the Porchlight Business Book of the Year (coming tomorrow, January 13th!), we have been sharing excerpts from each of the eight books on the shortlist for the award. Today, we have one from the Big Ideas & New Perspectives book of the year, The Sum of Us by Heather McGhee.

The 2021 Porchlight Big Ideas & New Perspectives book of the year is The Sum of Us: What Racism Costs Everyone and How We Can Prosper Together by Heather McGhee.

It is somewhat regrettable that the great research and writing Heather McGhee brings to The Sum of Us can even be considered a big idea or a new perspective in 2021, that we have so far been unable to see and build a more solid, common bond across race, class, and culture in our country that would allow us all a greater chance to prosper. But, as McGhee shows, we are still in the thrall of a false, zero-sum narrative suggesting that providing for the basic well-being of some must come at a cost to others. It is a myth as old as our nation, wrapped up in a repugnant belief in racial hierarchy that was used to condone the original sin of slavery, and that persists in undermining any effort to more adequately ensure the well-being of us all. Most of us believe that racism poisons the mind, and many accept that it pollutes our politics. Fewer see how racism continues to undermine our economy and individual prosperity. Heather McGhee’s book makes it clear, and offers a path to greater understanding and solidarity that can help us improve our personal lives, elevate our politics, and build greater prosperity in these divided and troubled times. That makes it not only a big idea, but one whose time has hopefully, finally, come.

The excerpt below comes from the book’s Introduction. 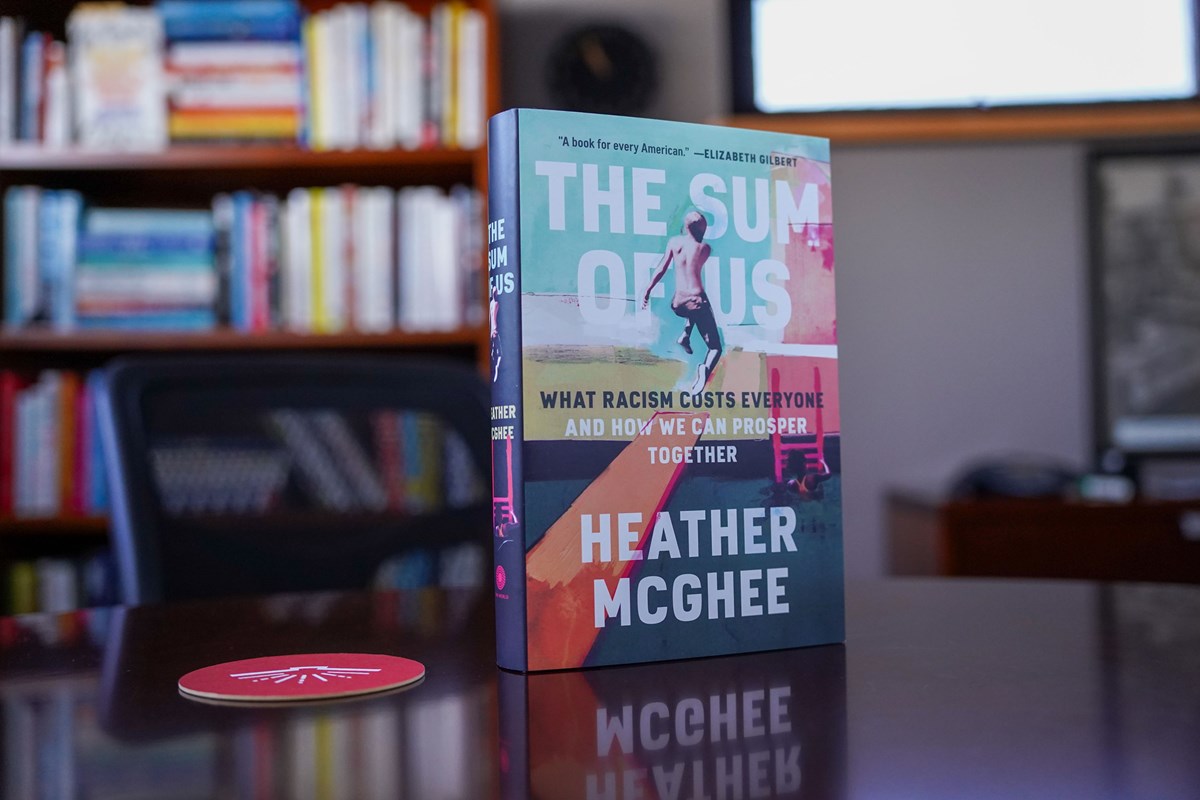 THIS BOOK RECOUNTS my journey to tally the hidden costs of racism to us all. It starts where my own journey began, trying to understand how the rules of our economy became so tilted toward the already wealthy and powerful. The people of our country are so productive and generate so much wealth, but most of the gains go to a small number, while most families struggle to stay afloat. I traveled to Mississippi and sat with factory workers trying to unite a multiracial workforce to bargain collectively for better pay and benefits. I talked to white homeowners who had lost everything in a financial crisis that began with the predatory mortgages that banks first created to strip wealth from Black and brown families. I heard from white parents and students who feared that segregated white schools would render them ill equipped for a diverse world. To understand when white America had turned against government, I traveled to one of the many places where the town had drained its public swimming pool rather than integrate it.

In each of these places, the white people's neighbors and co­workers of color struggled more because of racism: the Latinx factory worker is paid less for the same work; Black homeownership rates are near thirty-year lows while white levels are on their way back; the Black child in the segregated school has far more barriers to overcome; the loss of public goods at the time of integration means that families of color never got to enjoy that kind of government largesse.

As the descendant of enslaved Africans and of a line of Black Americans who were denied housing, equal education, jobs, and even safety from white lynch mobs, I am well aware that the ledger of racial harms is nowhere near balanced. I know the risks I'm taking by widening the aperture to show the costs of white supremacy to our entire society. The story I tell amasses evidence for a part of the story I believe we are neglecting at our peril, but rather than shift focus from racism's primary targets, I hope this story brings more people's eyes—and hearts—to the cause.

Black writers before me, from James Baldwin to Toni Morrison, have made the point that racism is a poison first consumed by its concocters. What's clearer now in our time of growing inequality is that the economic benefit of the racial bargain is shrinking for all but the richest. The logic that launched the zero-sum paradigm—I will profit at your expense—is no longer sparing millions of white Americans from the degradations of American economic life as people of color have always known it. As racist structures force people of color into the mines as the canary, racist indifference makes the warnings we give go unheeded—from the war on drugs to the financial crisis to climate disasters. The coronavirus pandemic is a tragic example of governments and corporations failing to protect Black, brown, and Indigenous lives—though, if they had, everyone would have been safer.

I'll admit that my journey was deeply personal, too. At its best, this country brings together all the world's peoples and invites them to make something new. Collisions of cultures have stretched the branches of my Black family over the years, so that it now includes white, Asian, and Latinx people, too. I started my journey when I was pregnant with a child whose grandparents would be Black, white, and South Asian. I'm sure some part of me doesn't want to believe that oppression of people of color really is an unalloyed good for white people, making us truly separate and intrinsically at odds—because then the multiracial America that made my son possible is doomed.

The logical extension of the zero-sum story is that a future without racism is something white people should fear, because there will be nothing good for them in it. They should be arming themselves (as they have been in record numbers, "for protection," since the Obama presidency) because demographic change will end in a dog-eat-dog race war. Obviously, this isn't the story we want to tell. It's not even what we believe. The same research I found showing that white people increasingly see the world through a zero-sum prism showed that Black people do not. African Americans just don't buy that our gain has to come at the expense of white people. And time and time again, history has shown that we're right. The civil rights victories that were so bitterly opposed in the South ended up being a boon for the region, resulting in stronger local economies and more investments in infrastructure and education.

The old zero-sum paradigm is not just counterproductive; it's a lie. I started my journey on the hunt for its source and discovered that it has only ever truly served a narrow group of people. To this day, the wealthy and the powerful are still selling the zero-sum story for their own profit, hoping to keep people with much in common from making common cause with one another. But not everyone is buying it. Everywhere I went, I found that the people who had replaced the zero sum with a new formula of cross-racial solidarity had found the key to unlocking what I began to call a "Solidarity Dividend," from higher wages to cleaner air, made possible through collective action. And the benefits weren't only external. I didn't set out to write about the moral costs of racism, but they kept showing themselves. There is a psychic and emotional cost to the tightrope white people walk, clutching their identity as good people when all around them is suffering they don't know how to stop, but that is done, it seems, in their name and for their benefit. The forces of division seek to harden this guilt into racial resentment, but I met people who had been liberated by facing the truth and working toward racial healing in their communities.

At the end of my journey to write the book, a multiracial coalition voted to end Donald Trump's presidency, with historic turnout levels despite a pandemic, and racial inequality topping the list of voter concerns. That coalition included millions of white voters, particularly the college-educated and the young. Yet the majority of white voters still supported an impeached president who lied to Americans on a daily basis, whose rhetoric and policies made him a hero of white supremacist terror groups, and who mismanaged and downplayed a pandemic that cost more than 400,000 American lives in less than a year. Rather than ending the soul-searching of the Trump era, the 2020 election raised new questions about how much suffering and dysfunction the country's white majority is willing to tolerate, and for how elusive a gain.

I'm fundamentally a hopeful person, because I know that decisions made the world as it is and that better decisions can change it. Nothing about our situation is inevitable or immutable, but you can't solve a problem with the consciousness that created it. The antiquated belief that some groups of people are better than others distorts our politics, drains our economy, and erodes everything Americans have in common, from our schools to our air to our infrastructure. And everything we believe comes from a story we've been told. I set out on this journey to piece together a new story of who we could be to one another, and to glimpse the new America we must create for the sum of us.

Excerpted from the book The Sum of Us: What Racism Costs Everyone and How We Can Prosper Together.
Copyright ©2021 by Heather McGhee.
Published by One World, an imprint of Random House, a division of Penguin Random House LLC.

Heather McGhee is an expert in economic and social policy. The former president of the inequality-focused think tank Demos, McGhee has drafted legislation, testified before Congress and contributed regularly to news shows including NBC’s Meet the Press. She now chairs the board of Color of Change, the nation’s largest online racial justice organization. McGhee holds a BA in American studies from Yale University and a JD from the University of California at Berkeley School of Law. 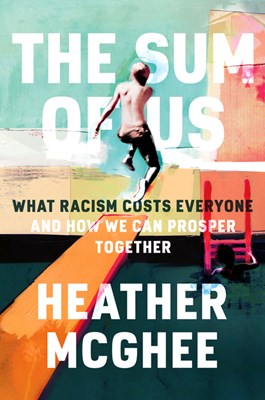