Where Do You Want to Go?

Maybe you don't really know. You feel stuck in a rut. Maybe, like I did, you just want to get away.

Maybe you don't really know. You feel stuck in a rut.

Maybe, like I did, you just want to get away. You are thinking, "Anywhere but here." I've been there.

Or maybe you think you've got your journey perfectly mapped out. But seemingly impassable roadbloacks cause you to crash and burn.

Those words come from Sam Bracken and his distinctive new book, My Orange Duffel Bag: A Journey to Radical Change. Bracken's book is part biography and part personal development guide.

It begins as a hard-to-stomach story of dysfunctional childhood—a flurry of strange men, bad influences and, beginning at age 9, drug and alcohol abuse. But that question, "Where do you want to go," was always burning inside him, and Sam Bracken somehow escaped that life of abuse, neglect and abandonment. After collapsing during track practice after a night of partying when he was only 13, Bracken decided he didn't want to be like the rest of his family, and his story quickly becomes one of a different kind of struggle—one of hope, pain and progress. And that story becomes the journey at the heart of My Orange Duffel Bag.

And on that journey, Sam Bracken learned some very valuable lessons—lessons he shares in the second, more instructive part of the book. He dubs them the 7 Rules for the Road, summing each of them up with single words: Desire, Awareness, Meaning, Choice, Love, Change, and Gratitude.

As you can tell from the photos here, the design of the book is truly unique. The only book I can think of that's even comparable is Kevin Carroll's Rules of the Red Rubber Ball. And the writing is singular as well. It's most lively and engaging when he's in teaching mode, relating the lessons he learned on his journey, and he is lyrical, almost poetic, while relating his own story. Summing up entire years with a sentence or two (and through the great design of the book, sometimes with one striking word), he seems almost disconnected from the words on the page.

You can understand why that is as you move through the book—he is no longer the person he describes in the early part of the book. He is no longer the victim of circumstance he was before he was old enough to make the decision to get out. And though it greatly shaped who he is, Sam Bracken is no longer the teenager "crawling in the dirt and gravel" after collapsing at track practice. He is the man who got past that, the Brian Piccalo Award winning football player from Georia Tech, and now an executive at FranklinCovey.

Ironically, the abused boy, once homeless and in special education classes, now teaches about excellence, leadership, time management and change.

The teen who feared he'd never escaped Las Vegas now flies around the world for his job.

And the young man who never knew his father and whose mother abandoned him has been blessed with his own great family.

So, no matter where you want to go, know that you can get there. And if you ever doubt that, you can turn to Sam Bracken and his Orange Duffel Bag. 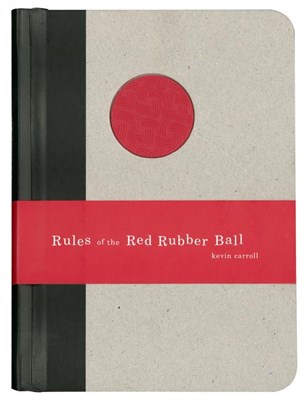 Rules of the Red Rubber Ball: Find and Sustain Your Life's Work