Pushing Past the Dip: How to Become the Best in the World

The long, tough slog through mediocre-ville. To be the best, Seth Godin explains, you must concentrate your effort, push a little harder, commit a few more resources and leave mediocre to those willing to be average. 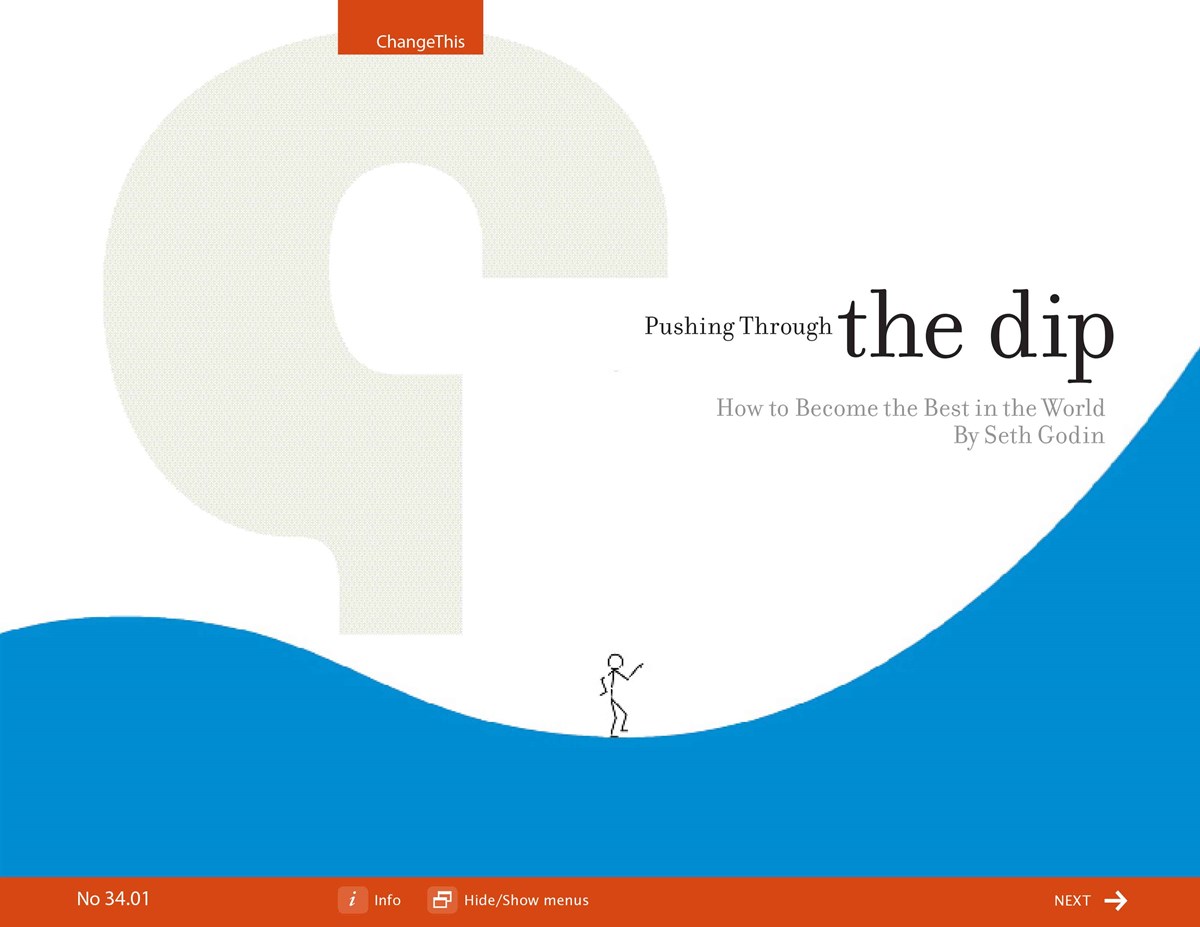 The relentless rush to be mediocre.

That’s what my new book, The Dip, is really about. Or, to be a lot more positive about it, it’s about avoiding temptation and gravity and becoming the best in the world.

You may already believe you’re the best at what you do. But chances are, you don’t. Chances are, you’re settling, getting along, doing the best you can... given the circumstances.

Which might have been fine in a company town, but doesn’t work so well in a winner-takes-all world. Now, the benefits that accrue to someone who is the best in the world are orders of magnitude greater than the crumbs they save for the average. No matter how hard-working the average may be.

I’ve never met anyone—anyone—who needed to settle for being average. Best is a slot that’s available to everyone, somewhere.

I wrote this ChangeThis manifesto for you because, without even meeting you, I’m sure that if you understood what was at stake, you’d quit. Early and often. You’d do whatever was necessary to not get stuck in the Dip, to cease to be mediocre.

Welcome to the Short Head

If you’ve read Chris Anderson’s The Long Tail, this isn’t news to you. But I don’t care about the long tail right now—I want to show you the short head. The short, big, profitable head. That’s the juicy share of the market that belongs to the people at the top of the list.

People don’t have a lot of time and don’t want to take a lot of risks. If you’ve been diagnosed with cancer of the navel, you’re not going to mess around by going to a lot of doctors. You’re going to head straight for the “top guy,” the person who’s ranked the best in the world. Why screw around if you get only one chance?

When you visit a new town, are you the sort of person who wants to visit a typical restaurant, or do you ask the concierge for the best place?

When you’re hiring someone for your team, do you ask your admin to give you the average résumé, or do you ask him to screen out all but the very best qualified people?

With limited time or opportunity to experiment, we intentionally narrow our choices to those at the top.

You’re not the only person who looks for the best choice. Everyone does. As a result, the rewards for being first are enormous. It’s not a linear scale. It’s not a matter of getting a little more after giving a little more. It’s a curve, and a steep one.

The (Real) Reason Number One Matters

The second reason there are such tremendous benefits to being number one is a little more subtle. Being at the top matters because there’s room at the top for only a few. Scarcity makes being at the top worth something. There are hundreds of brands of bottled water, and they’re all mostly the same. So we don’t shop around for bottled water. There is no top for bottled water. Champagne is a different story. Dom Pérignon is at or near the top, so we pay extra for it.

Where does the scarcity come from? It comes from the hurdles that the markets and our society set up. It comes from the fact that most competitors quit long before they’ve created something that makes it to the top. That’s the way it’s supposed to be. The system depends on it.

The Best in the World?

Anyone who is going to hire you, buy from you, recommend you, vote for you, or do what you want them to do is going to wonder if you’re the best choice.

“Best” as in “best for them, right now, based on what they believe and what they know.” And “in the world” as in “their world, the world they have access to.”

So, if I’m looking for a freelance copy editor, I want the best copy editor in English, who’s available, who can find a way to work with me at a price I can afford. That’s my “best in the world.” If I want a hernia doctor, I want the doctor who is best because she’s recommended by my friends or colleagues and because she fits my picture of what a great doctor is. That, and she has to be in my town and have a slot open. So “world” is a pretty flexible term.

The mass market is dying. There is no longer one best song or one best kind of coffee. Now there are a million micromarkets, but each micromarket still has a best. If your micromarket is “organic markets in Tulsa,” then that’s your world. And being the best in that world is the place to be.

Best is subjective. I (the consumer) get to decide, not you. World is selfish. It’s my definition, not yours. It’s the world I define, based on my convenience or my preferences. Be the best in my world and you have me, at a premium, right now.

“Be the best in my world and you have me, at a premium, right now.”

The world is getting larger, because I can now look everywhere when I want to find something (or someone). That means that the amount of variety is staggering, and it means I can define my world to be exactly what I have an interest in—and find my preferences anywhere on the planet.

At the same time, the world is getting smaller, because the categories are getting more specialized. I can now find the best gluten-free bialys available by overnight shipping. I can find the best riskmanagement software for my industry, right now, online. I can find the best clothing-optional resort in North America with six clicks of a mouse. So while it’s more important than ever to be the best in the world, it’s also easier—if you pick the right thing and do it all the way. More places to win, and the stakes are higher, too.

It’s at this point that the masses rise up as one and start talking about how obvious this all is. “Of course I want to be number one,” they cry.

But they really don’t. You really don’t. Sure, conceptually it makes sense to be the best in the world. And if the best-in-the-world fairy came down and blessed you, well that would be great.

It’s just not that easy, is it?

Thinking About The Dip

The reason that being the best in the world is worth so much is that few can do it. Scarcity carries a premium.

The Dip is the long slog between starting and mastery. A long slog that’s actually a shortcut, because it gets you where you want to go faster than any other path.

The Dip is the combination of bureaucracy and busywork you must deal with in order to get certified in scuba diving.

The Dip is the difference between the easy “beginner” technique and the more useful expert approach in skiing or fashion design.

The Dip is the long stretch between beginner’s luck and real accomplishment.

The Dip is the set of artificial screens set up to keep people like you out.

If you took organic chemistry in college, you’ve experienced the Dip. Academia doesn’t want too many unmotivated people to attempt medical school, so they set up a screen. Organic chemistry is the killer class, the screen that separates the doctors from the psychologists. If you can’t handle organic chemistry, well, then you can’t go to med school.

“Scarcity, as we’ve seen, is the secret to value. If there weren’t a dip, there’d be no scarcity.”

At the beginning, when you announce that you’re pre-med, you get all sorts of positive feedback and support. Your grandmother can’t believe her good fortune! But soon, the incredible grind of organic chemistry kicks in and you realize you’re doomed.

At trade shows, you see dozens of companies trying to break into an industry. They’ve invested time and money to build a product, create a marketing organization and rent booth space—all in an attempt to break into a lucrative market. A year later, most of them don’t return. They’re gone, unable to get through the Dip.

The same thing happens to people who dream of the untold riches and power that accrue to the CEO of a Fortune 500 company. Private jets, fancy country clubs, unchecked decision-making power. Who wouldn’t want to live like modern-day royalty? Of course, if you look at the résumé of a typical CEO, you’ll see that he endured a twenty-five-year Dip before landing the job. For a quarter of a century, he needed to suck it up, keep his head down, and do what he was told. He needed to hit his numbers, work longer hours than everyone else, and kiss up to his boss of the moment. Day in and day out, year after year.

It’s easy to be a CEO. What’s hard is getting there. There’s a huge Dip along the way. If it was easy, there’d be too many people vying for the job and the CEOs couldn’t get paid as much, could they? Scarcity, as we’ve seen, is the secret to value. If there weren’t a dip, there’d be no scarcity.

Successful people don’t just ride out the Dip . They don’t just buckle down and survive it. No, they lean into the Dip . They push harder, changing the rules as they go. Just because you know you’re in the Dip doesn’t mean you have to happily live with it. Dips don’t last quite as long when you whittle at them.

So, Here’s the Big Idea

The way you become the best in the world is by quitting the stuff where you can’t be the best. That leaves you the resources to invest in getting through the Dip.

Quit the dead ends and invest in the Dips.

Blog every day for three years until your blog is #1 in its field.

Give up your social life for a year until you make editor of the law review.

Last six seconds longer on every single exercise in the gym until your abs actually start to grow.

Can you do everything? Of course not. Breadth isn’t the point. The point is that in a world of infinite choice, in a world where the best in the world is worth more every single day, the only chance you’ve got is to find a Dip and embrace it. Realize that it’s actually your best ally. The harder it is to get through, the better your chance of being the only one to get through it.

Sticking with something just so you can be mediocre at it doesn’t make a lot of sense to me.

Being average is for losers.