“Tribes grow when people recruit other people. That's how ideas spread as well. They don't do it for you, of course. They do it for each other. Leadership is the art of giving people a platform for spreading ideas that work.” 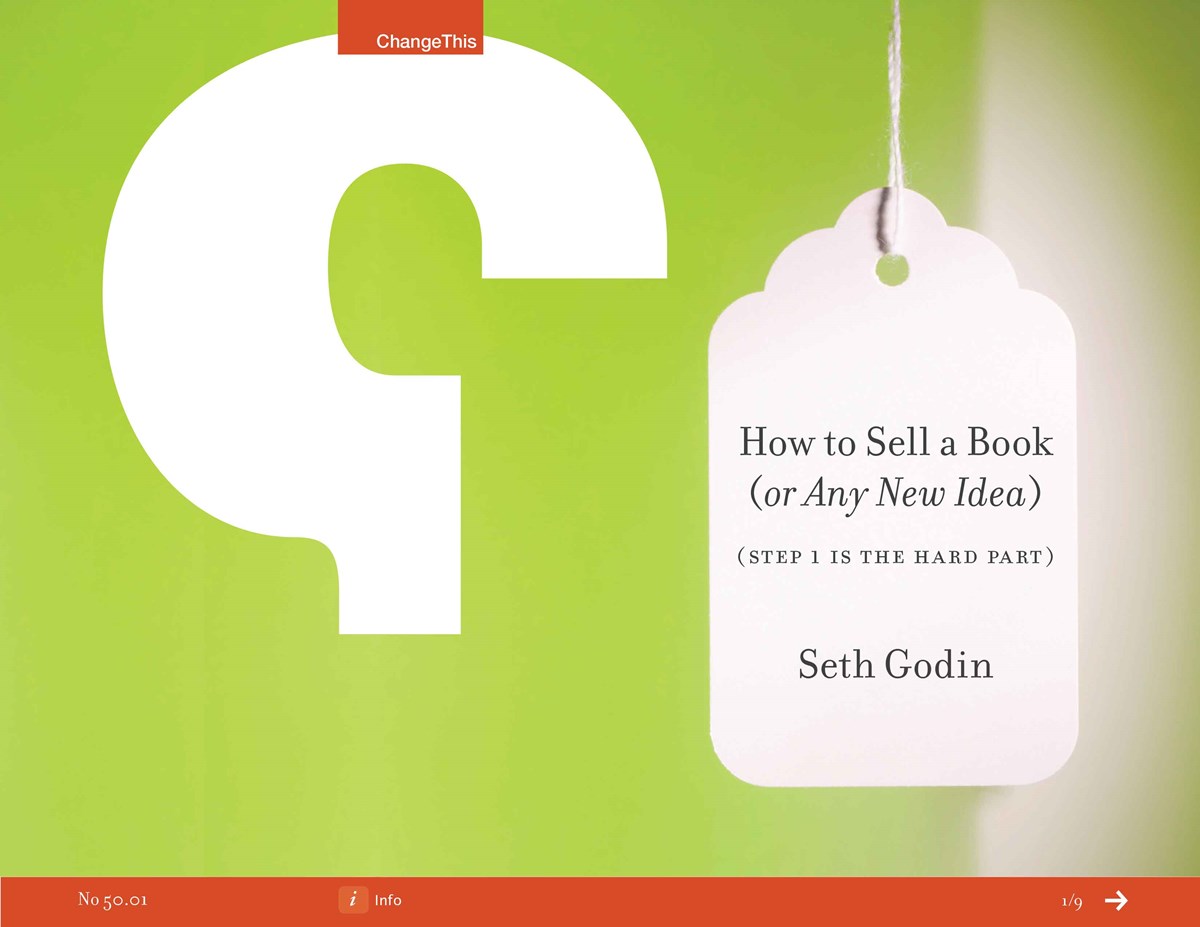 My friend Fred has a new book coming out and he was trolling around for new marketing ideas. I think he’d be surprised at this:

Tribes grow when people recruit other people. That’s how ideas spread as well. They don’t do it for you, of course. They do it for each other. Leadership is the art of giving people a platform for spreading ideas that work. If Fred’s book spreads, then he’s off to a great start. If it doesn’t, he needs a new book.

Step 1 undoes just about everything you thought you knew about marketing.

Most of all, this kind of thinking changes what matters about marketing. Marketing is now about leadership, about leading a tribe, about assembling and connecting and interacting with a group of people on a mission. Marketing is creating a movement.

Sure, you can see that movement at work at the Apple store. But you can also see it in the presidential election and in the impassioned pleas of Basecamp users in search of a new feature or in the way emerging churches market themselves.

The new tools of social media don’t work when you just spend money on them, they work when they inspire passion in people (real people). And that passion is generated by great products and visionary leadership.

“Marketing is now about leadership, about leading a tribe, about assembling and connecting and interacting with a group of people on a mission. Marketing is creating a movement.”

Forty years ago, Jerry Garcia and the Grateful Dead made some decisions that changed the music industry forever. You might not be in the music business and you may never have been to a Dead concert, but the impact the Dead made impacts almost every industry, including yours.

In addition to grossing hundreds of millions of dollars during their career, the Dead helped us understand how tribes work. They didn’t succeed by selling records (they only had one top 40 album). Instead, they succeeded by attracting and leading a tribe.

Human beings can’t help it. We need to belong. One of the most powerful and successful survival mechanisms we have at our disposal is to be part of a tribe, to contribute to (and take from) a group of like-minded people. We are drawn to leaders and their ideas, and we can’t resist the rush of belonging or the thrill of the new.

When one deadhead says to another, “2-14-70,” it’s like a secret code. The smiles and the hugs and handshakes define who we are... being in a tribe is a big part of how we see ourselves.

We want to belong not to just one tribe, it turns out, but to many. And if you give us tools and make it easy, we’ll keep joining.

Tribes make our lives better, and leading a tribe is the best life of all.

Those things are easy now. They might cost more than we’d like, but you can put them on a checklist and they’ll get done.

What’s hard now is breaking the rules. What’s hard is finding the faith to become a heretic, to seek out an innovation and then, in the face of huge amounts of resistance, to lead a team and to push the innovation out the door into the world.

Successful people are the ones who are good at this.

When the Los Angeles Philharmonic, one of the most prestigious in the world, went looking for a new conductor, they had their pick of perhaps a thousand qualified individuals. These were people who were proven, tested, and world-class at doing the work of running an orchestra the traditional way.

He is a twenty-six-year-old sensation from Venezuela whose résumé can’t compare to those of his elder peers. He doesn’t have the proven abilities doing yesterday’s hard work. The Los Angeles Philharmonic realized, though, that they could always find someone to get that work done. What they needed was a leader to bring the organization to a new audience in a new way.

Stop for a second and consider the implications of this. From a thousand qualified conductors (who understood the status quo), the Philharmonic chose a newbie who wanted to challenge it. Heretics discover this sort of success all the time.

“What’s hard now is breaking the rules. Successful people are the ones who are good at this.”

Why not you, why not now?

The barriers to leadership have fallen. There are tribes everywhere, many in search of leaders. This creates a dilemma for you: without a barrier, why not begin?

Simple example: Ten years ago, if you wanted to publish a book, you needed to find a publisher that would say “yes” to your idea. No publisher, no book.

Today, of course, you can publish a book all by yourself. Just visit lulu.com and you’re done.

Without someone to say yes, all that’s left are unpublished writers who tell themselves no.

Leadership is now like that. No one gives you permission or approval or a permit to lead. You can just do it. The only one who can say no is you.

Let’s continue for a minute, then, and think about when. Do you have what you need to lead? Do you need more power or education or money? When will you have enough of what you need in order to start leading a tribe?

If someone gave you two weeks to give that speech or write that manifesto or make that decision, would that be enough time? If two weeks isn’t enough, is it four or twelve or a thousand?

In my experience, leaders don’t need to wait. There’s no correlation between money, power or education and successful leadership. None. John McCain was fifth in his class (from the bottom) at the Naval Academy. Howard Schultz sold kitchen gadgets and ended up at an underfunded three-store coffee bean chain before he turned it into Starbucks. Ghandi was a seemingly powerless Indian lawyer in South Africa during apartheid. Waiting doesn’t pay. Saying yes does.

You thought you were going to read a short piece on marketing. Perhaps it would be filled with tips about making lots of Facebook friends or wording your email so that it gets past spam filters. Perhaps you were hoping for ways you could stretch your marketing budget, because even though your product is sort of lame and your boss is sort of dull, you have a job to do.

Instead, I’m talking to you about leading and mediocrity and connecting and tribes.

It’s all so fluffy. So vague. So much art, no science.

What we see, over and over, is that the brave but cheap leadership that leads to passionate movements always (always!) defeats the top-down, mediocre, slow-moving and very expensive techniques we all grew up with.