Mentorship 2.0: How to Find the Mentor You Need

"Waiting for a mentor to appear like a deus ex machina is a loser's game. Some people luck out, but most don't. This manifesto is about how to make your own luck—how to proactively identify the people you want in your life as mentors, cultivate real relationships, and look beyond the obvious. (Some of the most powerful lessons come from the least likely people.)" 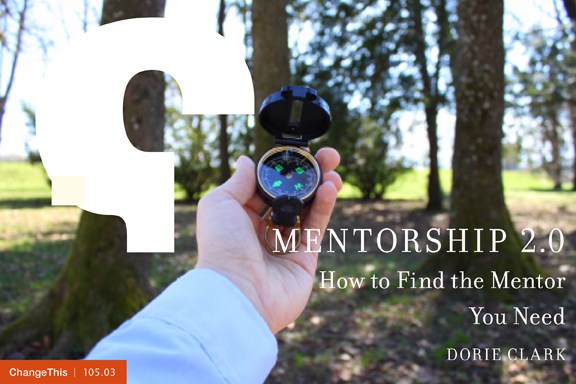 I never had a mentor. Maybe you haven’t, either.

Sure, I’ve had helpful colleagues or bosses who were willing to take a chance on me. But the dream of the mentor—an older, wiser version of you, hunting down opportunities on your behalf and ensuring you don’t repeat the same mistakes—never materialized. In fact, I realized it probably never would.

Waiting for a mentor to appear like a deus ex machina is a loser’s game. Some people luck out, but most don’t. This manifesto is about how to make your own luck—how to proactively identify the people you want in your life as mentors, cultivate real relationships, and look beyond the obvious. (Some of the most powerful lessons come from the least likely people.)

If you want to advance in your career, it’s almost impossible to do it on your own. So take a step toward controlling your own destiny by getting the right people around you, so you can move confidently to the next level. For most of us, great mentors don’t just “happen.” We have to take off our blinders, look anew at the resources we already have, and make plans to welcome and draw in connections with people we admire and can learn from. This manifesto shows how.

THE DECLINE IN MENTORSHIP

In my book, Reinventing You: Define Your Brand, Imagine Your Future, I profile Joel Gagne—who, as a 26 year-old, won a seat on his town’s school committee and found a mentor in Steve, a polished executive and fellow committee member 30 years his senior. That’s the type of mentor relationship most of us look for, but increasingly fail to find.

As Harvard Business School Professor Thomas DeLong told me in an interview, professional mentorship has been in free-fall over the past several decades. As senior executives have faced increased pressure to put in long hours and become rainmakers, their interest in activities that don’t contribute to the bottom line has waned. They simply stopped making time for rising talent. By now, it’s become an entrenched cycle, with rapid job turnover and most executives taking a “free agent” mentality. Why bother to cultivate younger executives when you’ll be leaving in a year or two, anyway?

“Take a step toward controlling your own destiny by getting the right people around you, so you can move confidently to the next level.”

But the paucity of senior leaders taking an interest in our careers doesn’t mean we have to simply figure everything out on our own. The insight, advice, and help of mentors can be an enormous driver in our careers. So how do we access it?

First, recognize that most mentors don’t come from central casting. You’re probably not going to find your own “Rich Dad” whose hobby is guiding you through life lessons and dispensing sage advice. (Of course, some question whether Robert Kiyosaki had one, either.)

Think, instead, about developing a portfolio of mentors. TV news reporter Hank Phillippi Ryan had always wanted to write a novel—and found herself inspired to do so when her young producer (who started out as her intern) published a romance novel and asked for Hank’s feedback. Amidst her editing, she told me, “it was percolating in my head: If she can write a book, I can write a book. It’s a Zen thing: when the student is ready, the teacher will appear.” Today, Hank has become an award-winning mystery author.

Your “mentor” may also turn out to be a group. Executive coach Alisa Cohn met every month with a group of female professionals that called themselves the “Buzz Club” because they’d promote each other. “I could bring anything to them and bounce it off them,” she told me. “They can be better strategic thinkers about you because they can show you a portrait of yourself.”

You can even tap individual friends with different skills you admire. If Rachel is great at public speaking, Marty is a master delegator, and Rohit is the best networker you know, you can often learn from them simply by inviting them to lunch and asking good questions; most people are very willing to share their strategies with a friend who wants to learn. (One art gallery employee I know—who was also an aspiring artist—obtained the equivalent of a free MFA simply by asking for advice and feedback from the artists she had befriended through her job.)

Finally, you can add “honorary mentors” to your list. Maybe you don’t know Desmond Tutu personally, and you’re not likely to meet him anytime soon. But by reading his books and listening to his talks, you can get a sense of how he approaches life.

If you’ve been searching for professional guidance and you suddenly find someone offering the insights you’ve been craving, it can be a powerful feeling. I’ve had people come up to me after speeches I’ve given and ask to be my mentee; I’ve had strangers in other countries email me after reading my blog posts and beg to be taken under my wing. But the truth is, entreaties like this— certainly from strangers, but even from people we know a little bit—are alarming, rather than flattering. What are they expecting? How much time is this going to take? Is this going to become a major hassle?

One way around this problem is to avoid use of the “m” word; it’s easy to suggest to someone that you meet up for coffee every few months and trade ideas and advice, without freighting it with the responsibilities of mentorship. But if there’s someone you’d specifically like to cultivate as a mentor—and you want them to think of themselves that way—executive coach Michael Melcher has a strategy: ask and explain.

“I did this ballsy thing once that I’m really proud of,” he told me. “I know this mover-and-shaker guy, and I worked on a project with him eight or nine years ago. He’s a captain of industry, but I think he sees me as a different, youthful version of himself. I said, ‘Dick, I’m going to ask you a question: I want you to be my mentor, and what that means is every six months we’ll meet for breakfast and you give me advice.’ And he said of course. The key is I asked and I explained what the role should be.” Clarifying and limiting the scope will put people at ease, and make them more likely to say yes.

“We have to take off our blinders, look anew at the resources we already have, and make plans to welcome and draw in connections with people we admire and can learn from.”

THE ONUS IS ON YOU

The other great myth is that your mentor will come to you with a set of instructions—the golden keys to your learning. Unfortunately, they just don’t have time for that. (After all, the people we’d most like as mentors are usually busy, successful people with a million demands on their time.)

Instead, we have to make it easy for them. The Center for Talent Innovation has extensively studied the phenomenon of sponsorship—essentially, mentorship on steroids—where the mentor not only gives advice and serves as a sounding board, but also proactively uses political capital on your behalf. This is a dream scenario, and for all mentor relationships, and especially sponsor relationships, it’s critical to recognize that the onus is on you, the “protégé,” to put in most of the effort (CTI puts the figure at 70%).

When Roxy Kriete started a new fundraising job, she signed up for a mentor program sponsored by her local chapter of Women in Development. “I was so excited about my mentor and I was stunned to realize I was in a minority,” she said. “At least within my hearing range, everyone else was grumbling that it was terrible. No one had a good thing to say about it.” The difference, she realized, is that others had expected their mentors to deliver pearls of wisdom to them, while Roxy had essentially developed her own curriculum.

“I invented my own syllabus and she was terrific at delivering these extemporaneous lectures,” Roxy told me. “I’d say, ‘Tell me about this, tell me about that.’ The other thing I did was ask her to critique my work frequently. I’d bring her something, my plan for capital campaign materials or a draft annual fundraising letter. I’d say, ‘Are you willing to critique this? Go at it.’”

MAKE IT WORTH THEIR WHILE

What can you give someone who’s more powerful than you? Most people assume the answer is nothing, and give up. But the trick—and there is a trick—is that you have to find the answer. Powerful people won’t tell you; they probably don’t even know. So the hurdle you have to surmount in order to earn mentorship, or maybe even sponsorship, is inventing or discovering a way you can make yourself useful.

A basic one is simply saying thanks. After the 2004 Asian tsunami, Elizabeth Amini made a small, $10 donation to the relief effort in the name of each of her mentors and sent them a note to let them know. “It wasn’t calculated at all,” she says, “but I got the most responses ever. People were so thankful.”

Second, you can share your perspective. Michael Melcher, who befriended Dick the power lawyer, realized he also had something to give in the relationship: “It’s something to remember when dealing with older people,” he says. “They like to share advice, but they’re also very interested in what younger people are doing and how they view the world.”

Listening, being loyal, talking up your mentor on social media, or even performing gruntwork— anything to make your mentor’s life a little easier—is likely to be very appreciated. “A lot of routine, mundane tasks that most people wouldn’t want to do actually bring you into contact with senior people in the organization,” Stanford Graduate School of Business Professor Jeffrey Pfeffer told me. “Often, small but important things aren’t getting done—so when you do them, people will say, ‘Wow, you took the initiative; that was very helpful.’ And that will make people more familiar with you and your competencies and capabilities, and you’ll build a much better image.”

If you don’t have a mentor, you’re probably missing out on helpful advice, support, and leads.

“The hurdle you have to surmount in order to earn mentorship, or maybe even sponsorship, is inventing or discovering a way you can make yourself useful.”

But now you can take action to bring them into your life. Here are five things you can do in the next week to open yourself up to finding the mentor or mentors of your dreams.

Mentorship is too powerful a tool to leave to chance. You can bring a lot of wisdom and influence into your life if you stop looking for the “mythical mentor” who has it all: seniority, authority, and a magnanimous desire to help you. Instead, look at the resources you’ve already got—the people in all facets of your life who may have specific skills or traits you admire—and proactively reach out and connect with them. If you think through carefully what you’d like to learn from them (essentially creating your own curriculum) and are assiduous about finding ways to give back, you’re likely to end up with a powerful mentor experience that will take your career to the next level. 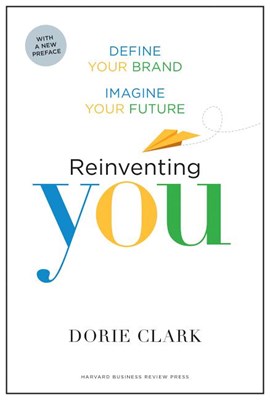 Reinventing You: Define Your Brand, Imagine Your Future