Data Capitalism: Counting and Communications Technologies and How They Have Altered the Structure and Management Of Business

"Since the Industrial Revolution, new counting and communications technologies have altered the structure and management of business. ... Yet the guiding metric of management for decades has remained the same: finance. With improvements in communications and computing, financial performance can be measured faster and in greater detail than before. But it is still a fairly blunt, crude measurement—counting money, one factor of production and output of the enterprise. It is still financial capitalism. But big data promises to usher in a new phase in the practice of management." 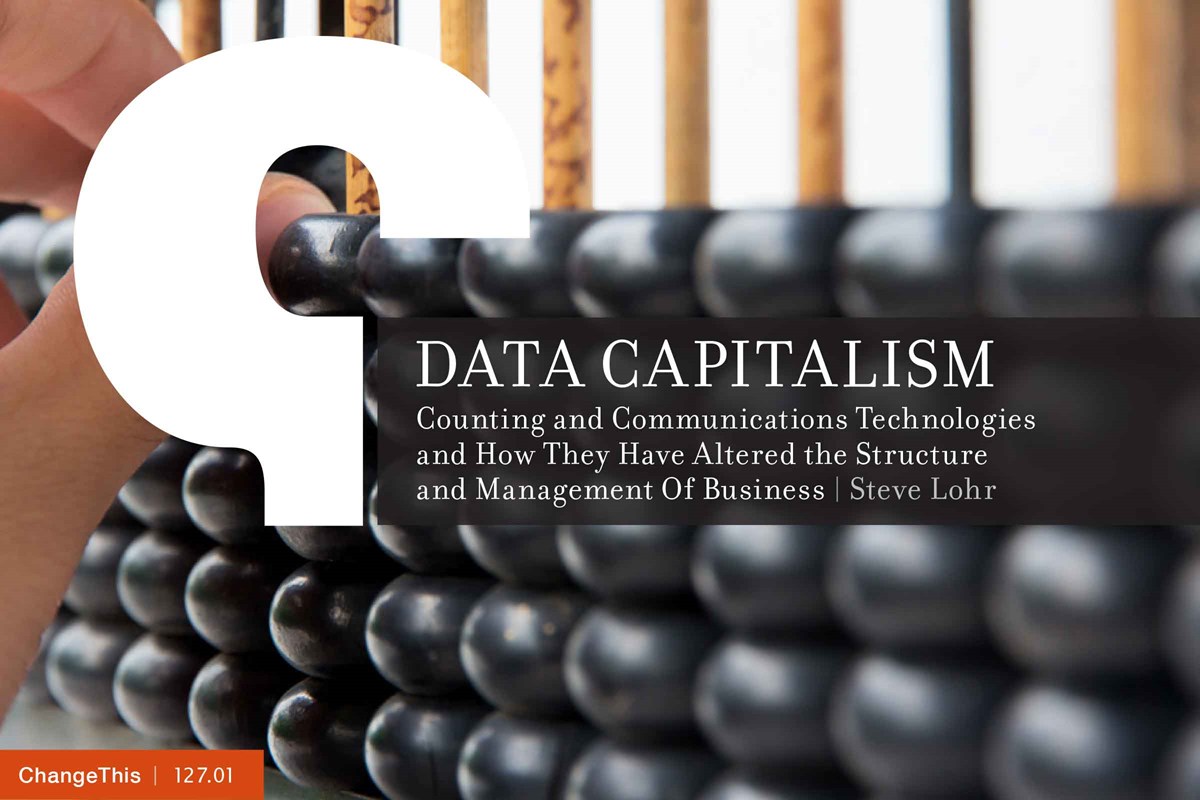 Revolutions in management, as in technology, become evident mainly in retrospect. And they take time, coming in evolutionary steps over years.

But one is underway now, and for lack of a better shorthand term, I’ll call it “data capitalism.”

Technology tools are part of this engine of change in decision-making. Modern data technology has two key ingredients. The first is the explosion of digital data—from the Web, smartphones, GPS mapping, sensors, genomic data, and the like. That’s the newish data. But traditional business data has been steadily digitized over the last two decades, as well.

Today, estimates Erik Brynjolfsson of MIT’s Sloan School of Management, 90 percent of what companies do, from communications to marketing to manufacturing, is either created in digital form (like e-mail or documents) or tracked digitally (like bar codes and radio tags).
In the 1990s, Brynjolfsson figures that only about 20 percent of corporate activity left a digital footprint. That’s a quantum change.

The second main technical ingredient is the steady advance over years in clever software, largely from the computing discipline of artificial intelligence, to help make sense of it all. These are the two essential technologies—abundant data and smart software—in the toolkit of what we’re now calling data science, or big data.

The technology opens the door to seeing and measuring things as never before. We’ve observed the phenomenon throughout history. The microscope, for example, allowed scientists to see and explore the mysteries of life down to the cellular level. And telescopes enabled astronomers to see the stars and galaxies in new ways. Technology tools can be transformative.

Since the Industrial Revolution, new counting and communications technologies have altered the structure and management of business. In the late nineteenth century, railways, the telegraph, telephone, and accounting gave rise to large national corporations. By the early twentieth century, Standard Oil, General Electric, United States Steel, and DuPont were industrial behemoths.

The rise of such large-scale enterprises, run by battalions of salaried managers, is what the historian Alfred D. Chandler Jr. called managerial capitalism.

Since then, the practice of managing people, corporate structure, and strategy has continuously adapted to advancing technology and changing intellectual fashions. The management of people has been a blend of elements of scientific management, which relies on incentives, control and monitoring, and humanistic management, which assumes that workers are creative and self-motivating. Managers trained in economics tend to be the scientific management camp, while industrial psychologists and organizational behavior experts tend to be in the humanistic management camp.

Today … 90 percent of what companies do, from communications to marketing to manufacturing, is either created in digital form (like e-mail or documents) or tracked digitally (like bar codes and radio tags). “

In structure and strategy, trends embraced over the years have included conglomerates, virtual corporations, globalization, re-engineering, and strategy based on technology “platforms” rather than products. Management progress and fads have been accompanied, and sometimes triggered, by shifts in computing. The era of the mainframe, a centralized command-and-control
technology, saw the proliferation of conglomerates in the 1960s and 1970s, while the personal computer and later the Internet brought reengineering, globalization, and the start-up economy.

Yet the guiding metric of management for decades has remained the same: finance. With improvements in communications and computing, financial performance can be measured faster and in greater detail than before. But it is still a fairly blunt, crude measurement— counting money, one factor of production and output of the enterprise. It is still financial capitalism. But big data promises to usher in a new phase in the practice of management.

In practical terms, finance is largely a comment on the past—what has happened in the last three to six months—and mostly based on data generated inside the company for management and control. With all the new sources of information from outside the corporate walls, big
data is an information-based look at the present and into the future, helped by artificial intelligence software.

It won’t happen overnight, but the center of gravity in business decision-making will swing toward data. Management will become less a finance exercise and more a data exercise. Financial capitalism will give way to data capitalism.

For just one example of what is possible look at McKesson, the big pharmaceutical distribution company, which serves 26,000 locations in the United States and ships about 240 million pills a day. Efficiency has been all but a religion for McKesson for decades. Yet in the last few years, McKesson has taken a striking step further by cutting the inventory flowing through its network at any given time by $1 billion.

The payoff came from insights gleaned from harvesting all the product, location, and transport data, from scanners and sensors, and then analyzing that data with software to identify potential time-saving and cost-cutting opportunities. The technology-enhanced view of the business was a breakthrough that Donald Walker, a senior McKesson executive, calls “making the invisible visible.”

Note too that the McKesson case, like more and more companies adopting data science, is in an established, mainstream industry. The technology is moving well beyond the well-known Internet incubators of big data methods like Google and Facebook.

The technology tools may open a door, but people have to walk through it. That is both a matter of people with appropriate skills and with a different mindset.

A few years ago, the McKinsey Global Institute, the research arm of the consulting firm, projected that the United States needed 140,000 to 190,000 more workers with “deep analytical” expertise and 1.5 million more data-literate managers, whether retrained or rehired.

The talent pool needed to create a culture of data-driven decision-making is growing. It’s not just the hard-core quants being minted at data science institutes that leading universities worldwide are setting up. We’re also seeing it in the schools seeking to educate that second, larger, ultimately more important group of data-literate managers.

It won’t happen overnight, but the center of gravity in business decision-making will swing toward data. Management will become less a finance exercise and more a data exercise. Financial capitalism will give way to data capitalism. “

Once, students who had professional experience with computer programming were rare at business schools. Today, David Yoffie of the Harvard Business School estimates that a third or more of the 900 students there have experience as programmers, and far more of them
have undergraduate degrees in the so-called STEM disciplines—science, technology, engineering or mathematics. Yoffie calls it “an extraordinary change in the talent pool.”

It is the managers—not the data scientists themselves—that will be the swing vote in determining how fast data-driven decision-making takes hold. For them, it has less to do with a wizard’s mastery of data than with a fundamental curiosity about data. The goal is to foster a mindset,
so that thinking about data becomes an intellectual first principle, the starting point of inquiry. It’s a mentality that can be summed up in a question: What story does the data tell you?

To say that data capitalism is the future, and perhaps inevitable, is not to say it will be immediate. A little perspective is required to see the substance behind the salesmanship—and recognize that the latter comes and goes in hype cycles, while the former is a permanent force.

Remember, for example, that nearly all the bold predictions made in the 1990s about how the Internet was poised to disrupt the media, advertising, and retail industries really did happen—about a decade later, years after the Internet stock-market bubble had burst. The marketers and the impatient money left, but the real entrepreneurs and engineers stayed and built the future.

There will undoubtedly be a similar winnowing, though less dramatic, as the big data industry progresses.

Technological progress is fueled by optimism. It is the necessary, animating force that propels entrepreneurs, scientists, and investors to bet their money, time, and careers on the future. But as a powerful new technology emerges, there is also a lot to be said for understanding its limits.

Two quotes frame the issue succinctly. The first: “You can’t manage what you can’t measure.” For this one, there appear to be twin claims of attribution, either W. Edwards Deming, the statistician and quality control expert, or Peter Drucker, the management consultant. Who said it first doesn’t matter so much. It’s a mantra in business and it has the ring of commonsense truth.

The second quote is not as well known, but there is a lot of truth in it as well: “Not everything that can be counted counts, and not everything that counts can be counted.” Albert Einstein usually gets credit for this one, but the stronger claim of origin belongs to the sociologist William Bruce Cameron—though again, who said it first matters far less than what it says.

Big data represents the next frontier in management by measurement. The technologies of data science are here, they are improving, and they will be used. And that’s a good thing, in general. Still, the enthusiasm for big-data decision-making would surely benefit from a healthy
dose of the humility found in that second quote.

The basic drift of data-ism seems unassailable: decisions of all kinds should be increasingly made based on data and analysis rather than experience and intuition. Science prevails; guesswork and rule-of-thumb reasoning are on the run. Who could possibly argue with that? But experience and intuition still have their place. At its best, intuition is really the synthesis of vast amounts of data, but the kind of data that can’t be easily distilled into numbers—or at least not yet.

Big data represents the next frontier in management by measurement. The technologies of data science are here, they are improving, and they will be used. And that’s a good thing … “

Having all kinds of decisions dictated by—rather than guided by—this layer of data-driven artificial intelligence that increasingly resides on top of both the digital and physical worlds is a pitfall, for sure. It is made possible by the technology, but the outcome will depend mainly
on how people decide to use and manage the technology. The potential threat to privacy and the surveillance applications of big data technology, if run amok, are reasons for pause as well. But these are management challenges for business, society, and individuals. Again, humans must decide how the technology is used.

And all technologies involve trade-offs and risks. In ancient times, fire could cook your food and keep you warm, but out of control could burn down your hut. Cars pollute the air and cause traffic deaths, but they have also increased personal mobility and freedom, and stimulated the development of regional and national markets for goods. Big data technology is not fundamentally different. Its advance is probably inevitable, and the risks seem manageable and the potential benefits enormous—deepening and widening the aperture of decision-making in every field.