The Power of Apprenticeship

"There is a huge shift happening in the United States right now: a return to the time-honored tradition of apprenticeship. Apprenticeship is the Western World's oldest form of occupational training, and with good reason. By learning first-hand from an experienced tradesperson, an apprentice acquires mastery of a trade, inside and out. It is a hands-on method that equips participants with exactly the right skills and experience to transition directly into a particular job. Modern apprenticeships have countless advantages for employers and the economy on the whole, as well as for anyone, at any stage of life, looking to launch a successful, well-paid, and fulfilling career." 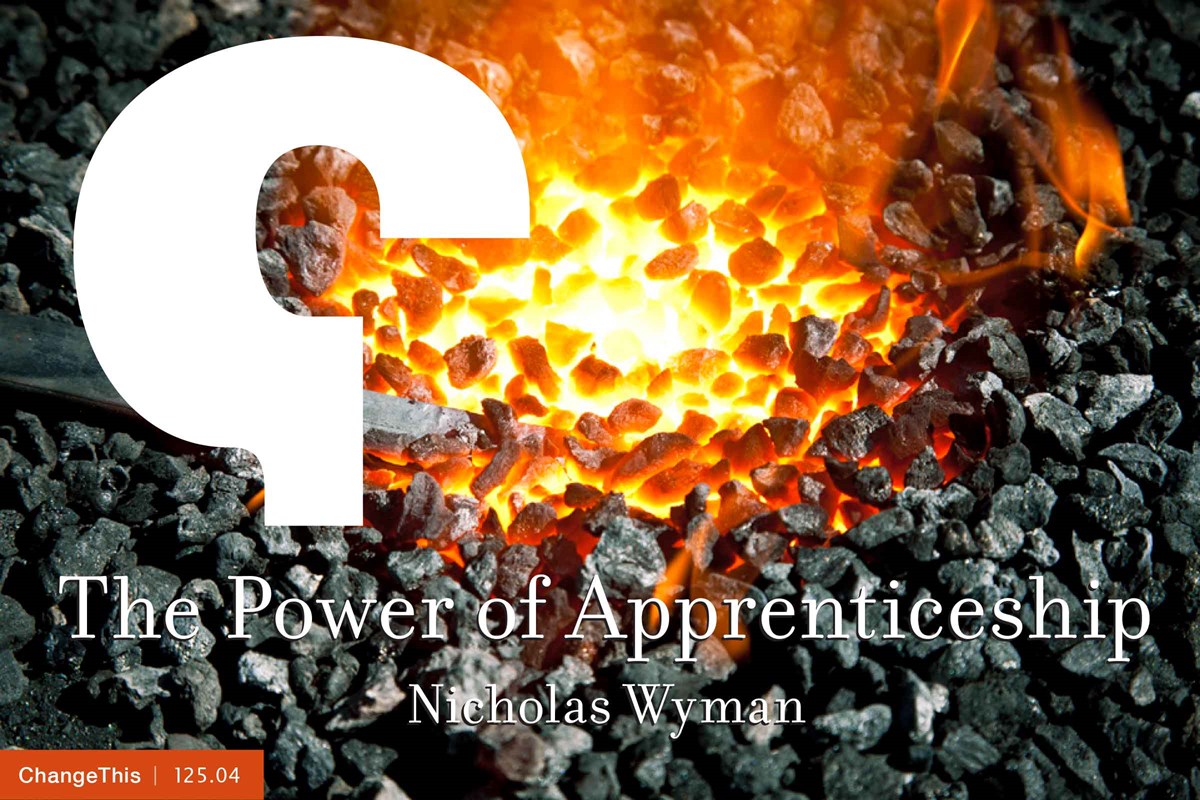 There is a huge shift happening in the United States right now: a return to the time-honored tradition of apprenticeship.

Apprenticeship is the Western World’s oldest form of occupational training, and with good reason. By learning first-hand from an experienced tradesperson, an apprentice acquires mastery of a trade, inside and out. It is a hands-on method that equips participants with exactly the right skills and experience to transition directly into a particular job.

Modern apprenticeships have countless advantages for employers and the economy on the whole, as well as for anyone, at any stage of life, looking to launch a successful, well-paid, and fulfilling career. I began my own career as an apprentice chef, and found it to be an invaluable experience, through which I gained the skills and confidence that have shaped my career path ever since.

There’s a good reason that U.S Secretary of Labor Thomas Perez considers apprenticeship “a successful career pathway, helping workers punch their ticket to the middle class.” Nearly nine out of ten apprentices are employed immediately upon finishing their training, at an average starting salary of around $50,000 a year.

As economically beneficial as apprenticeship is, it has equal benefits on the more personal side of things as well. All over the country, apprenticeships are creating opportunities for bright, motivated people to enjoy the unparalleled satisfaction of hands-on, meaningful work—what Matthew Crawford describes in Shop Class as Soulcraft as “the satisfactions of manifesting oneself concretely in the world through manual competence.”

When you think about apprenticeships, the word may conjure up an image of 17th century craftsman huddled over a wooden workbench wielding chisels. But, in fact, today’s apprenticeship programs are becoming more sophisticated and progressive, and can be found in many modern fields from engineering, sales and marketing, to computer programming and health care. Indeed, many of the knowledge-economy jobs available in the United States today can be effectively learned through apprenticeship. And, this trend is growing. This fall, President Obama made available $100 million in American Apprenticeship Grants as part of a push to grow apprenticeships throughout the country and scale up successful apprenticeship models. The president is also calling for an additional $2 billion fund to double apprenticeships over the next five years.

One of the key ingredients to such rapid growth is the focus on “Apprenticeship Evolved”—the move to apply the apprenticeship model across various industries. While apprenticeship has traditionally been used in the building trades, “It translates well to all sectors,” says Brad Neese, director of Apprenticeship Carolina. In fact, 90% of the apprenticeships in South Carolina are, according to Neese, “in IT, high-end health care jobs, and highly skilled manufacturing jobs that have more to do with programming and technical operations.”

All over the country, apprenticeships are creating opportunities for bright, motivated people to enjoy the unparalleled satisfaction of hands-on, meaningful work …

One such evolving field is mechatronics, a high-growth occupation in advanced manufacturing. With the increasing amount of high-tech components in manufacturing today, skilled mechatronics technicians are in demand. A mechatronics technician is responsible for the diagnosis, repair, and installation of the many systems that keep a plant running. The job requires a diverse set of skills, including elements of programming, automation, wiring, hydraulics, and more. Essentially, every kind of knowledge needed to keep the machines in good working order.

John Harris, a first-year mechatronics apprentice at Cooper Standard, an auto parts manufacturing plant in Spartanburg, South Carolina is proof of the power of apprenticeships in paving the road to fulfilling and meaningful careers. According to plant manager Warren Snead, John has mechatronics “in his DNA.”

Not long ago, John was working as an electrician in the Air Force, stationed in Afghanistan. After completing his military service, he and his wife moved from New Mexico to South Carolina. For John, an apprenticeship seemed like a good way to transition from military to civilian life. “I went straight from high school into the Air Force,” says John, “so I didn’t have a lot of work experience outside of that.”

John’s job search led him to apply for the apprenticeship with Cooper Standard, which he quickly landed. He finds the work both challenging and rewarding. “I’m part of a team that’s pretty much responsible for keeping the entire plant running,” says John. “We are the reason that the AC works, that the power keeps running. So, yes, it’s rewarding to know I’m doing something that adds up to a bigger picture.”

For John, the hands-on method of learning is one of the best things about his apprenticeship. “I’ve always been a hands-on kind of guy. My dad had rental houses so he was always getting me to do things and I learned as I went. Even if I made a mistake, he was there to say ‘woah, don’t do that’ and that’s how I learned. This is kind of like that.”

John also benefits from the guidance and experience of not just one, but a whole group of mentors each day. Each of the experienced technicians he trains with has a different specialty or area of expertise. It’s a great way to learn because he gets to absorb different kinds of
information from each of them, contributing to his growing body of knowledge and experience. It’s clear that John is a natural leader: well-spoken, enthusiastic, and motivated. His boss, Warren Snead, describes John as “self-actualized—the perfect example of an apprenticeship
working right.”

In the Air Force, John learned about working in a team and contributing to something larger, but his apprenticeship is giving him the opportunity to explore both his creative side, and his leadership potential as well. Every day at Cooper Standard brings new, interesting problems to solve. As a group, the technicians have to work together to hammer out the best way to do things, but there’s often an opportunity to come up with a better way, and this keeps John challenged and engaged with his work. A lot of the work is about collaborating, but John also has to “make his own orders,” he says. “I have to take the initiative to figure out what’s best,”
John says. But rather than being intimidated by this, John sees it as an opportunity. “You get to make your voice matter,” he says.

In the Air Force, John learned about working in a team and contributing to something larger, but his apprenticeship is giving him the opportunity to explore both his creative side, and his leadership potential as well.

John has also noticed that his growing set of skills translates to every area of his life. Not only has he been able to develop his communication and problem-solving abilities, but, he says, “I’m never going to have to call a plumber again.” John loves knowing he can fix anything that might go wrong his own home—from the pipes to the wires to the rafters. “With a maintenancestyle apprenticeship,” he says, “you learn all these skills that you can use every day.”

John says he can confidently recommend apprenticeship to others—with one small caveat: “You’ve got to have the work mentality. An apprenticeship is not something you can just fly through. It’s hard. It takes a lot of hours. You work when the machines go down, even if it’s quitting time. But it’s definitely fulfilling enough to make it worth it.” For John, this apprenticeship is just the first step in a career that he can take in whatever direction he wants. He is optimistic about his future. “If I want to excel in this career, it’s all up to me,” he says. “I can go as far as I want to go.”

Whether currently unemployed, unhappily employed, or simply wishing to experience the joys of learning a new skill through hands on work—why not seek out apprenticeship programs in your area.

Check out www.doleta.gov/oa. The site has a list of what occupations can be apprenticed. You can also visit the innovativeapprenticeship.org, which has a comparison of apprenticeships available in other parts of the world.