Why We Don't Get the Leaders We Say We Want

"The state of workplaces, not just in the U.S. but all over the world, can only be described as dire. Whether you prefer Gallup's data on employee engagement or the surveys on engagement or job satisfaction emanating from the various human resource consulting firms and the Conference Board, the picture that emerges is consistent: mostly disengaged, dissatisfied, disaffected employees. Moreover, there is no evidence that things are getting better over time. Although trust in leaders is seemingly important for organizational success, if you consult the Edelman Trust Index or the aforementioned surveys, once again the data are clear: a remarkably low level of trust in leaders in many sectors and many countries. What gives? And maybe more importantly for those people worried about companies and their people, is there any hope for a better future?" 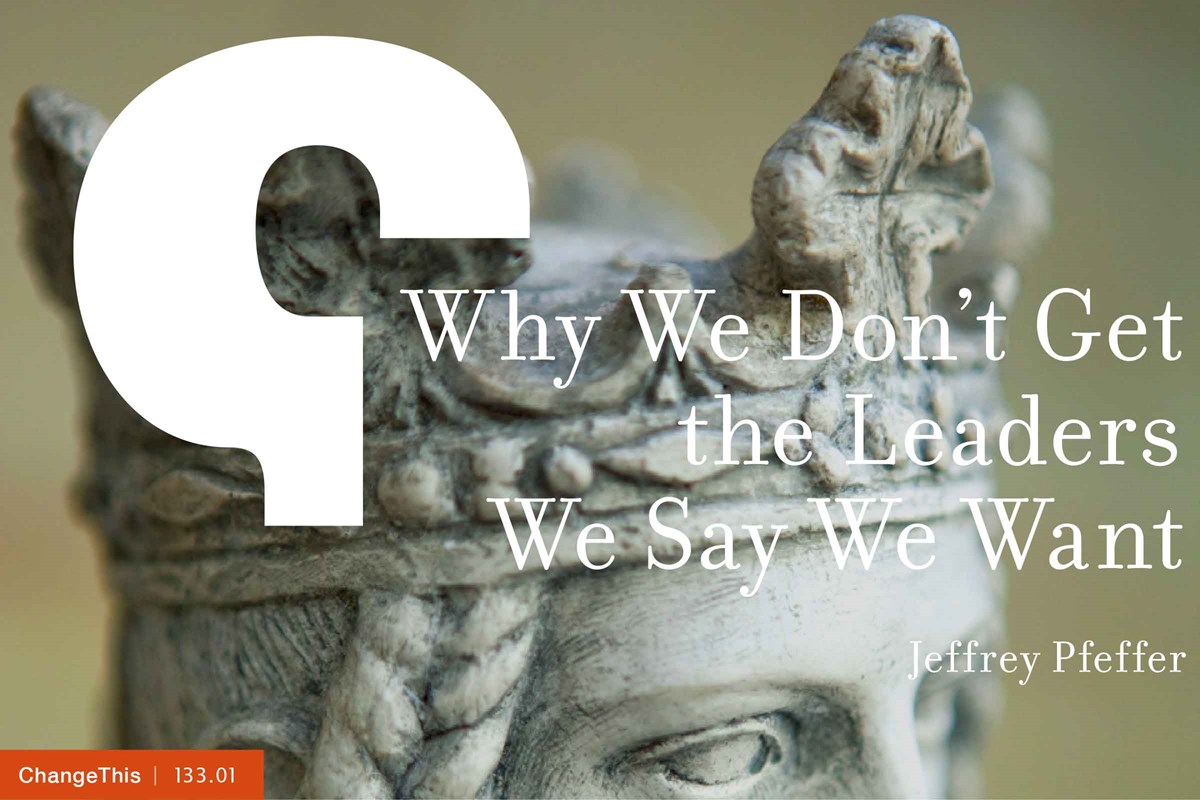 The state of workplaces, not just in
the U.S. but all over the world, can only
be described as dire.

Whether you prefer Gallup’s data on employee engagement or the surveys on engagement or job satisfaction emanating from the various human resource consulting firms and the Conference Board, the picture that emerges is consistent: mostly disengaged, dissatisfied, disaffected employees. Moreover, there is no evidence that things are getting better over time.

Although trust in leaders is seemingly important for organizational success, if you consult the Edelman Trust Index or the aforementioned surveys, once again the data are clear: a remarkably low level of trust in leaders in many sectors and many countries.

Probably because of this reality, there are a billion (alright, maybe it only seems like that many) blogs, TED Talks, books, seminars, and workshops filled with the many “shoulds” of leadership: leaders should be modest, honest and truthful, authentic, take care of others, build trust, be vulnerable, let others participate in important decisions, share information, and the list goes on… and on.

Meanwhile, there is not a scintilla of evidence that more people in leadership roles are adhering to the many prescriptions offered. Bill Gentry, from the Center for Creative Leadership, reviewing the evidence, estimated that about one-half of all leaders were failures in their role.

Leaders are not doing too well for themselves, either. Leaders at all levels, including CEOs, lose their jobs with increasing and alarming frequency, as many reports confirm. These career derailments cost companies, also. Numerous surveys document the high proportion of companies that complain their leadership development efforts are ineffective, that they face leadership shortages as a consequence, and in many cases leadership deficits are severe enough to constrain the companies’ ability to grow and expand their operations.

What gives? And maybe more importantly for those people worried about companies and their people, is there any hope for a better future?

Many factors explain the present circumstances and the unintentional but undeniable failures of a leadership industry variously estimated to be between $14 billion and $50 billion in annual revenues just in the U.S. In what follows, I describe three important causes of the persistent problems. Unless these things profoundly change, the answer about the future state of leadership and workplaces seems clear: no, the future isn’t going to be any different from the past, for how could it be.

Measures signal what is deemed important inside companies, because what is measured must be, almost by definition, important—just for the very fact of it being measured. Conversely, what is neglected by measures is, by inference, unimportant. Measures focus people’s attention. Measures typically drive rewards and reinforcement, because performance on measures has consequences for people’s raises, promotions, and job tenure. Therefore, and it should come as no surprise, measures help determine people’s behavior. This is a lesson that comes from
the quality movement, and also from social science research in disciplines ranging from organizational behavior to management accounting.

And what do most companies, and for that matter universities, measure when it comes to their leadership education and development activities? In some cases, they measure nothing. In other cases, organizations assess how much effort—resources—were expended such as the number of people trained, budgets spent, number of training days or hours per employee, and so forth. And then there is the most common measure of all: those ubiquitous participant ratings, sometimes referred to as “smiley-face” sheets or happy sheets.

Nor is this situation of misleading and inaccurate “customer” ratings unique to the context of instruction.

As I described in a post for Fortune, there are minimal relationships between consumer-generated lists of the best physicians and best doctor lists generated by practicing physicians or by a thirdparty organization that assess physician quality. Similarly, there are small overlaps between the lists of best restaurants that come from experts such as Michelin and professional restaurant reviewers and the lists of best restaurants generated by consumers on sites such as TripAdvisor.

This result shouldn’t be surprising. Untrained and mostly unconstrained consumer raters respond to everything and anything in an inconsistent fashion. In the case of leadership, people like—and why shouldn’t they—uplifting messages and well-delivered entertainment. As Wharton marketing professor J. Scott Armstrong has commented, real learning and behavioral change often entails experiencing some degree of discomfort and disconfirmation. Few people prefer cod liver oil to chocolate cake, regardless of the relative health benefits, and people in
leadership learning activities are mostly no different in liking to be told what they already want to believe.

So in the context of leadership events, when you reward entertainment and entertainers, the market delivers—companies get great entertainment, but not necessarily education, insight, or behavioral change. No wonder so much money has been spent to so little effect.

One of the reasons that management is not a profession, like medicine or law, is that anyone can claim to be an expert with no licensing, certification, or even experience required. Nor do people practicing management or, worse yet, dispensing management advice, need to show even the remotest interest in learning anything about the domain in which they are practicing. Here’s one example. Some years ago when I served on the compensation committee of a publicly traded company, we were discussing the stock option plan for senior management. At about that very moment, many news organizations were reporting on a study co-authored by Pennsylvania State business school professor Donald Hambrick that showed that options led to more risky executive decisions.

This finding is scarcely surprising when you think about the incentive structure of options which afford no penalties to bad decisions if the options are underwater—there is only upside from betting the ranch. And there was other relevant research, such as an extensive metaanalysis showing no effect of senior executive ownership of company stock, either directly or through options, on the companies’ financial performance.

When I asked our professional compensation consultant if he had heard about any of this research, he replied “no.” When I asked him if he wanted me to send him the studies or news reports about these findings, the answer was again, “no.” And the company kept using him and his firm! Worse yet, when I have told this story to my friends in the HR consulting industry, they are all convinced it was their firm, or could have been.

It is impossible for me to conceive of a situation in which a sentient human being would go to a physician with a dread disease and continue seeing that physician if the health care provider were both unknowledgeable about and uninterested in the relevant science affecting that individual’s health. In medicine and, for that matter, other disciplines such as engineering, we demand expertise and try as best we can to assess whether or not people know what they are doing and talking about. In leadership, a good story coupled with enough self-assurance
is often sufficient.

Therefore, in the domain of leadership development, where interventions as frequently measured by their entertainment value and with no science or knowledge of relevant behavioral science is invariably required, people, not surprisingly, make stuff up, selectively report, and tell lovely stories that frequently have little relationship to reality.

We don’t need government regulation or professional certification to fix all this, although there are other countries that take professional credentials, even in the management realm, more seriously than the U.S.

One of the reasons that management is not a profession, like medicine or law, is that anyone can claim to be an expert with no licensing, certification, or even experience required. “

Over the decades, scholars have gathered evidence on the qualities and behaviors that, on average, make people more or less successful in their careers. And we also know the leader behaviors that build higher levels of employee engagement and performance—pretty much the qualities that the leadership writing and speaking advocate. What we haven’t done is examine the profound discontinuities between the two sets of qualities.

We say we want modesty. But field studies and experiments, in organizations and settings of all types, including the military, suggest that narcissism and its correlates, including displaying even unwarranted self-confidence, are the path to career success.

We say we want nice people, and my friend and sometimes co-author Bob Sutton wrote a best-selling book arguing that workplaces should adopt The No Asshole Rule for hiring. But longitudinal studies of careers over decades as well as laboratory experiments show that the aphorism, nice guys (and gals) finish last, is mostly right, with the penalty for agreeableness being even larger for men than for women.

We say we want people who tell us the truth, but actually we demonstrate behavior more consistent with the old Fleetwood Mac song, “Tell Me Lies, Tell Me Sweet Little Lies.” The social science evidence shows that lying is incredibly common in everyday life and is often used to smooth over relationships. Evidence also demonstrates that the powerful lie more frequently and effectively, and that the ability to lie skillfully helps produce power. Moreover, deception is a source of power among most of the primate species that have been studied. Some of the most venerated business leaders have been consummate storytellers. After all, to take just one noteworthy example, the phrase, “reality distortion field,” described Steve Jobs’s ability to convince others that Apple was
more successful than it was—a skill that, through the operation of the self-fulfilling prophecy, actually made Apple more successful than it otherwise would have been.

This list could go on, maybe indefinitely. It shouldn’t be a big surprise that leader behaviors that make work groups or organizational units more successful are not perfectly correlated with the behaviors that make leaders individually more successful. Organizational performance and leader career outcomes are imperfectly correlated. For instance, research shows that few directors of banks that suffered and were forced to turn to the government for assistance during the recent financial crisis lost their positions. Moreover, sociobiology has recognized for decades that the qualities that improve group fitness are not necessarily the identical qualities that cause individuals to rise to the top within those groups.

The next time you read one of the numerous reports or articles decrying the sorry state of workplaces, careers, and leadership, the next time you find yourself not having sufficient talent to promote, or with poor employee engagement scores, or with people heading for the exits, here’s some advice: Don’t decry the sorry state of the leadership industry, the consulting firms you have used, or your boss or the HR department in your organization. Each and every one of us, through the book and training evaluations we provide, the evidence and scientific credentials we demand—or don’t—and the behavior we tolerate and indeed reward in our everyday interactions and decisions, are constantly complicit in creating and recreating the workplaces that, according to vast epidemiological evidence, literally sicken and kill more than 120,000 Americans each year.
When we change what we measure, demand, and reward, workplaces will change. And not a moment before.