In Defense of the Gray Area

"For countless cultural reasons, Americans have long associated the phrase with defeat. Yet, 'I don't know' is not an end, but a beginning. It is not a failure but an opportunity. 'I don't know' is a launch pad for deeper investigation. [...] Yes or no not only creates a false interpretation of historical or contemporary issues, it can also be dangerous. Isaac Asimov said violence is the last refuge of the incompetent. That refuge is frequently guarded by unyielding monolithic absolutes." 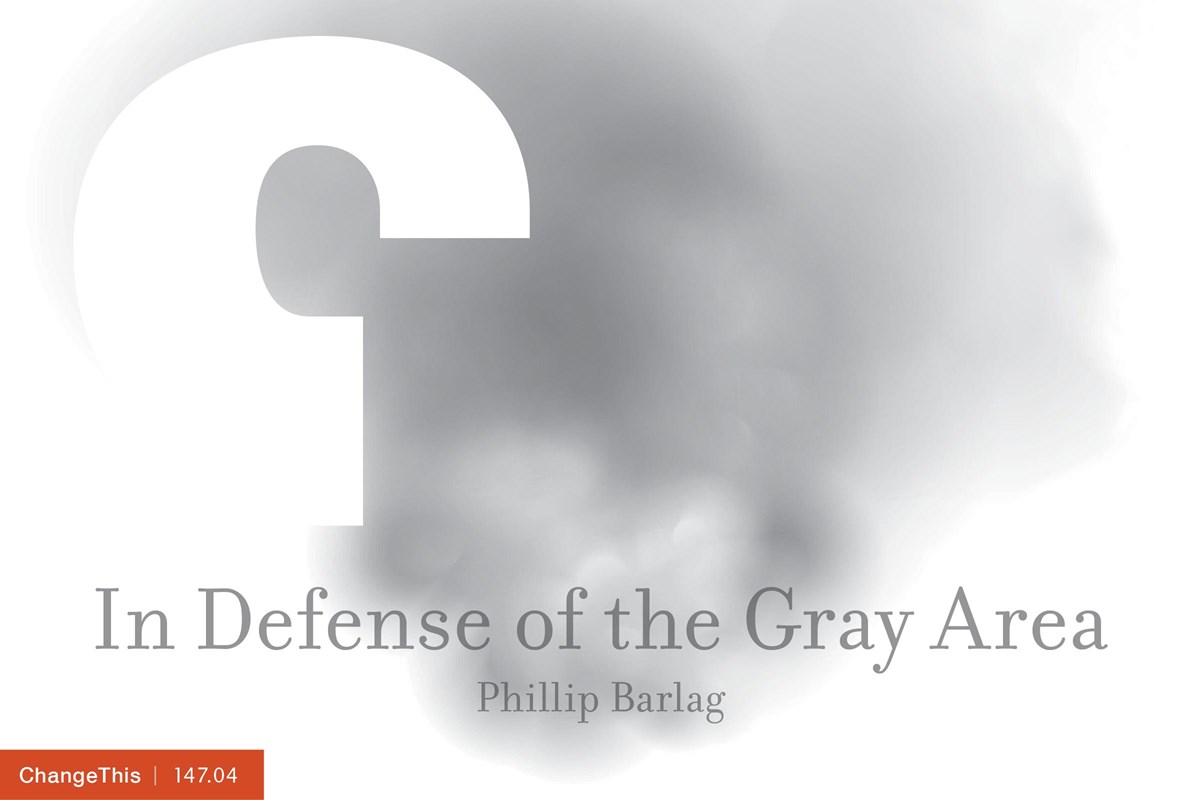 A few years ago,

PBS ran a very thoughtful documentary called “Looking for Lincoln.” The host, Henry Lewis Gates Jr., attempted to cut through the legend and folklore of the 16th President of the United States and build a complete picture of who— and what—he was.

Professor Gates explored whether or not Lincoln was truly a great man, or, if in fact, he is perhaps dramatically overrated by history—even a racist. My favorite aspect of the series was that it never answered this essential question. “Looking for Lincoln” never really found him. Lincoln
remained enigmatic and subject to interpretation and further inquiry.

I found the series producers’ decision to resist a pat answer or polar conclusion refreshing. In an America where much of the public tends to root for its political party as if it were a football team, loudly and blindly, the producers courageously chose to say those words our leaders
find so impossible to utter: I don’t know. What’s more, they allowed the picture of Lincoln to evolve; to ebb and flow. The picture of Lincoln was one that was slow to come into focus.

For countless cultural reasons, Americans have long associated the phrase with defeat. Yet, “I don’t know” is not an end, but a beginning. It is not a failure, but an opportunity. “I don’t know” is a launch pad for deeper investigation. PBS’s great show went deeper. We should too.

Yes or no not only creates a false interpretation of historical or contemporary issues, it can also be dangerous. Isaac Asimov said violence is the last refuge of the incompetent. That refuge is frequently guarded by unyielding monolithic absolutes.

Americans have learned to shun the gray area. It is an uncomfortable place. Critical thought requires time, energy and accountability. In general, we want the answers provided to us in clean, digestible chunks. We want our wars to be totally justified. We want Chris Kyle to be
an unqualified hero. We want the home team to win the Super Bowl.

It gets even more complicated when we examine history. We’d prefer it if Christopher Columbus discovered the New World and no lives were lost in the process. So that’s what we teach our kids, and those kids become us. Occasionally, voices call out from the margins, but they too often get marginalized.

Take Julius Caesar. What does the average person know about Julius Caesar? He was a Roman. He was a ruthless tyrant and a good general. He was assassinated on the Ides of March, the subject of one of Shakespeare’s most dramatic plays. All true. Combined, they tend to cast a cynical light on Caesar.

In the interest of ratings and the American appetite for absolutes, The History Channel has developed into one of the primary purveyors of black-and-white historical dreck (in addition, it also spews hours of pure conjecture and fiction about ancient aliens, mermaids and
contemporary Megalodons). It recently ran a show on Caesar in which they portrayed him as a genocidal maniac.

It’s not worth getting into all the flaws in the way they presented the information, but it is worth noting that if we took the message at face value, then we would be missing a great opportunity to make sense of our own world through a better understanding of one
of the most fascinating people ever.

Caesar was charming, energetic, brilliant, and capable of astonishing generosity. He pardoned enemies most would have expected him to execute. He was gracious in victory far and above the values of his age.

For countless cultural reasons, Americans have long associated the phrase with defeat. Yet, “I don’t know” is not an end, but a beginning. It is not a failure, but an opportunity. “I don’t know” is a launch pad for deeper investigation.

In my book, The Leadership Genius of Julius Caesar, I distill the lessons modern leaders should take away from the life and career of Caesar. This exercise was deeply rewarding for me, and dramatically underscores how the past is prologue to the present.

Of course, to focus on the elements of his greatness and ignore his flaws is equally dangerous. No matter how many times the maxim “to err is human” is uttered, it seems that it’s awfully easy to forget that these words are timeless and true.

We don’t really want the people we admire to err. We often don’t even want them to be human. We want them to be as perfect and iconic as the painting of a saint. It’s easier to ignore the mounting evidence that Gandhi called for racial segregation in South Africa so that we can continue having an unblemished admiration of him than it is to acknowledge the possibility of this very painful shortcoming.

On the other hand, it is also human nature to be iconoclastic. We often go out of our way to seek out or root for events and information that allow us to deconstruct the big names in society and in history. However, when we tear down people just for the sake of killing our
darlings, so to speak, we miss an opportunity to extract the great lessons.

Consequently, humanity swings between the extremes of avoidance and iconoclasm. Like a giant pendulum, we oscillate between one extreme and the other in our judgments on the great people from history, rarely pausing to explore the space between the apex of each swing.

There are, of course, many examples of fine biographical nuance. Walter Isaacson’s Steve Jobs did a great job of painting a variegated picture of his subject, exploring the tech pioneer’s character flaws, questionable decisions and colorful life experiences. In the end, it’s hard not to admire the man; his vision and his legacy, and place him among the great innovators in human history. Isaacson pulls off a triumph: Giving us a complete picture of a remarkable person, without skipping over the more difficult aspects of his nature. The collective consensus on Steve Jobs seems to account for the range of his complete humanity, the good, bad, and ugly.

Why is this so hard for us? Humans like binary choices. We have two hands. We have two sides of our brain. We create heaven and hell. We make a choice and the inertia created by that choice pins us to the spot. It’s how we are wired. In order to organize the world, we have to take in an incalculable amount of information. Second-guessing everything isn’t only exhausting, it can be dangerous. Certain risks just shouldn’t be taken, or even considered. At some point we need to categorize things and move on. Where our physical safety is concerned, this is an attribute. A hungry lion is never something we want to encounter. However, when it comes to history— and our interpretation of the people that shape it—this can be dangerous and costly.

Being judgmental is frequently characterized as a negative trait. I generally agree, but we do not live in a vacuum. It’s impossible to not have an opinion. Reserving judgment and being open minded do not mean that we need to forgo our very natural tendency to form opinions. That said, I draw a distinction between opinion and judgment.

When we tear down people just for the sake of killing our darlings, so to speak, we miss an opportunity to extract the great lessons.

But where do we draw the line? Can we ever have a firm judgment and take confidence in it? At some point we have to trust the complete judgment of history, right? After all, there aren’t many people that would say that Hitler and Stalin were really good guys, just misunderstood.
This seems obvious enough. Some people just were all bad and are accordingly deserving of a judgment that says so. There’s no doubt that Hitler had charisma, was incredibly effective at consolidating power, and was able to incite the passions of an entire country through his
force of personality. Any one of these things might be an admirable trait in isolation, but it still seems wrong identifying anything about Hitler as admirable. To me, that’s okay. We don’t have to course correct in our forgiveness of people’s humanity to become apologists for the worst
people ever. People need to form their own judgments and opinions. The consensus of history is that these people, and many others, were just bad—some would say evil—and that we shouldn’t look to them for any example. I agree. There are enough brilliant people from history for us to learn from and admire. We aren’t so desperate for great models of leadership that we need to try to find any redeeming attributes from bad ones. We can heed the warning signs about the rise of tyrants and tyranny, but that’s a whole other matter.

So, once again, where do we draw the line? Where does open minded end and confident in our judgment begins? This is up to each of us. Only we can know if we’ve done the work, asked the right questions, gathered the information so that our opinions stand up. But where the great  people from history are concerned, it’s always worth remembering that even the titans were people too. They are bound to be flawed. This doesn’t make them all bad. Martin Luther King, Jr. is said to have had numerous affairs. Does that make anything he accomplished less profound or important in shaping the modern world? I don’t think so. It doesn’t mean I like that he stepped out, but it doesn’t mean I have to stop admiring him. It’s still okay to admire people even after we discover that they weren’t perfect.

What’s important is resisting the temptation to bucket people, and keeping an open mind toward our view of them. This gives us the luxury of learning and growing, by distilling out the lessons that we have to learn from the people that have come before us, and the people that are all around us.

What’s important is resisting the temptation to bucket people, and keeping an open mind toward our view of them. This gives us the luxury of learning and growing …

Unless we are dedicated to the sole study of one person or event, constant revision of opinions is impossible. At some point, new information dries up as we move around and consider a different topic. But some times that information just finds us anyway. It’s helpful to stay open minded to the idea that new information on a subject may present itself, even after we stop actively seeking such inputs. In such cases, revisiting our point of view here and there is more of a passive pursuit than an active one, but no less important.

The life and career of any person will always be subject to interpretation. However, the monochromatic biography of any great man or woman is, by definition, propaganda. As a result, the more honest and, hence, more valuable examination will always draw primarily from
the gray area. Eventually, the more we can learn about what it means to be human, the more comfortable we become with the totality of peoples’ humanity— and ultimately accept our own.