"The number of articles about successful people's habits are innumerable. Dating back to The 7 Habits of Highly Successful People by Stephen Covey, we've been obsessed with what it takes to do well. But for most people who work in large organizations, it is not that easy. Their lives are not defined by the ability to design their own habits, or routines; their work lives emerge from the environment that they work in, and the forces—operational, hierarchical, and functional—that exert themselves on their daily lives. Successful people in these environments, we've found, have routines that are distinct to their social systems, and these routines differentiate their performance." 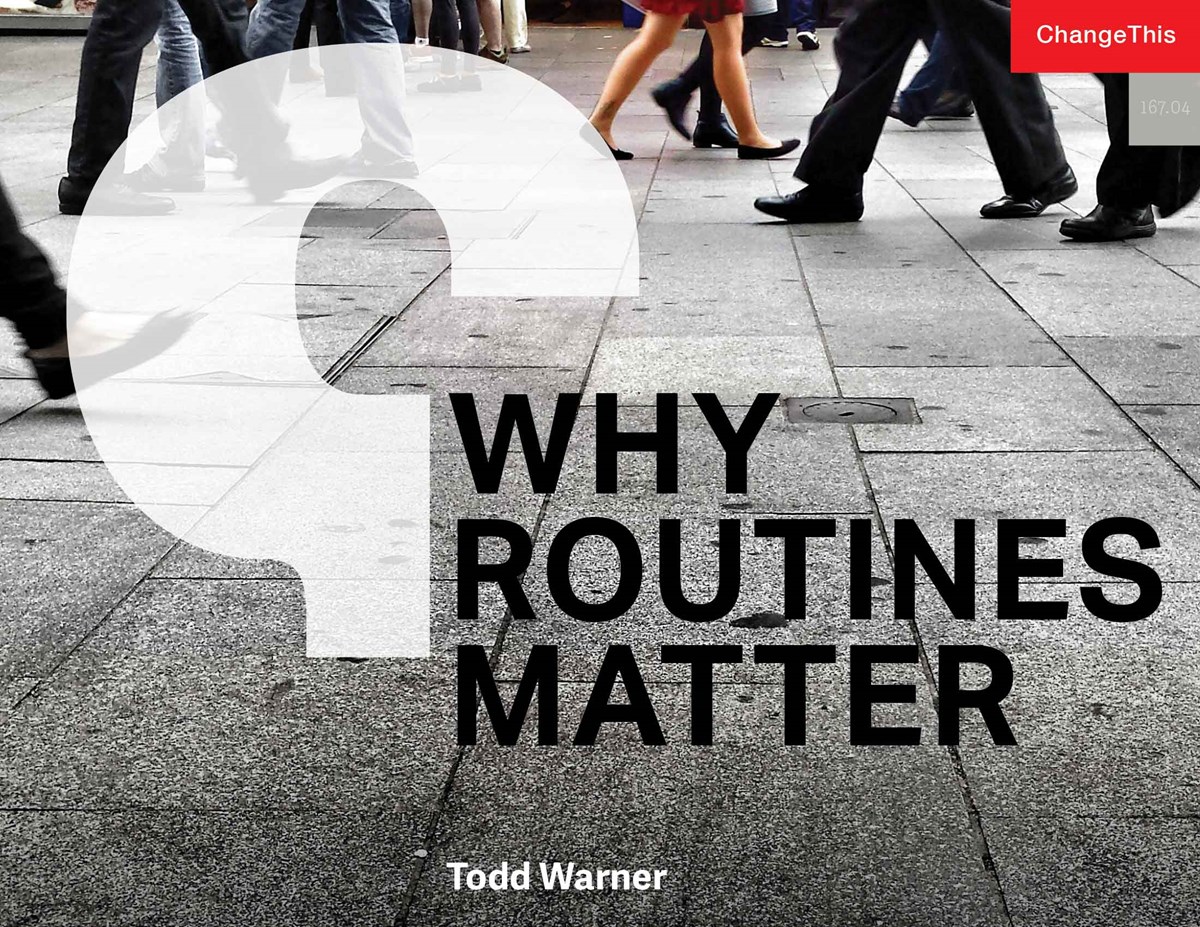 The number of articles about successful people’s habits are innumerable.

Dating back to The 7 Habits of Highly Successful People by Stephen Covey, we’ve been obsessed with what it takes to do well. But for most people who work in large organizations, it is not that easy. Their lives are not defined by the ability to deign their own habits, or routines; their work lives emerge from the environment that they work in, and the forces—operational, hierarchical, and functional—that exert themselves on their daily lives. Successful people in these environments, we’ve found, have routines that are distinct to their social systems, and these routines differentiate their performance.

My obsession with Routines in organizations began as a counter-cultural phenomenon. For decades, I had watched organizations on multiple continents try to affect the behaviours of their leaders and teams using the same ingredients: competency maps and capability lists, multi-rater assessments, annual performance reviews, culture surveys, and abstracted learning programs. Yet in organization after organization, nothing has really changed.

Faced with the untidy reality that my life’s work was a colossal waste of time, I started to ask two very simple questions: Why do people do what they do? and What will make them change? At the core of these questions, I found Routines. Not a generic list of Routines, like the competency maps peddled by management consultants, but very specific Routines defined by the social system within which a person works, and by what level they’re at within the organization.

People in organizations work out of habit and familiarity. That is why “new joiners” are so anxious—they lack both things. People in organizations build ways of doing things, with known people, around familiar outputs. While HR departments are defining which competencies matter, people are busy tinkering with, and perpetuating, the status quo. They are reworking their local, well-ingrained practices to refine and build upon past success. Don’t get me wrong, competencies do matter, but not in the way we think. A person needs to be competent at what they do, but that is merely the entry ticket to performance. After base-line competence is attained, they do little to nothing to impact an organizations’ attempt to improve performance or change operating patterns.

Zenger and Folkman wrote about “companion competencies” in their book, The Extraordinary Leader. This concept, a sidebar in the book, is at the core of Routines. Essentially, competencies don’t live in isolation, they tend to cluster and work together, in patterns. While Zenger and Folkman focus on how the competencies cluster from a content perspective (e.g. “trustworthy” tends to come with “collaborative”), I took a different spin. It doesn’t matter what the competencies are, or how they cluster, content-wise; it matters “where” they show up in the day-to-day.

People in organizations don’t work to lists, and I assure you that they don’t double-check the competency maps and capability lists prior to walking into a meeting. They work through discrete moments that matter; within these moments we tend to see Routines. These Routines are discrete to their position in the organizational hierarchy. As people move up in an organization, their Routines need to evolve to fit with what the organization needs from them in a different role.

One large, global manufacturing and service company was interested in looking at the Routines of their highest performing operational leaders. They had suffered through a spate of fatalities in their operations and were convinced that there was something different in what they dubbed their “pockets of brilliance”—people in very specific operational leadership roles were doing something different, and getting very different results. These leaders had a combination of incredibly high production results, superb leadership and culture scores, and nearly perfect safety records in their operations. The “playbook” for looking at these people would have been to translate the very individualistic, psychologically-based characteristics of these leaders into some sort of abstraction (we’d call them “capabilities” or “competencies”), and then tell other leaders to “do that.” This organization opted for a more sociological and behavioural economicsbased lens; they opted to look at Routines.

For most people who work in large organizations, their lives are not defined by the ability to deign their own habits, or routines; their work lives emerge from the environment that they work in.

Working with the company, we interrogated data to understand the exact discrepancies between the “pockets of brilliance” and average leaders from a numerical standpoint. We found a statistically significant gap in all three areas of inquiry between the best leaders and the average; the best leaders’ Culture scores were 10-15% higher than average leaders, their production dependability was off-the-charts relative to the norm, and they indeed ran safer operations. But why?

As we talked to these leaders, and shadowed them around their operations, we found a very different collection of routines in their day-to-day work. For instance, where normal leaders managed up, and spent inordinate amounts of time in their offices, responding to their boss and Head Office, the highest performers were on the floor. But it wasn’t just the time-in-field that mattered, it was their focus when they were there.

The best leaders sought to understand local perspectives and levels of understanding in ways that average leaders lacked; they understood, and influenced, the social pressures that were at play in work teams. This manifested through their “time in field” routine; these leaders would not just walk around and be an authoritative presence, they would ask questions, listen to local thinking, and deepen local understanding. They worked with local, intact teams, to rewire understanding and reset their expectations of one another. They were incredible teachers in the places where it mattered most. This one routine, which was codified, and is being replicated across the 500 operational leaders in the company, seemed to make a material difference to production, culture, and safety.

We define routines as the “moments that matter.” Anyone who has ever been in a leadership role knows that all leadership moments are not created equal. Routines are the patterns of regular social events that define and enable performance in every organization. They are learning and leadership, applied. The best performers do them differently. Routines are predicated on two simple beliefs: people work out of habit, and teams create local norms. It is through wellcultivated Routines that the best leaders in any social system learn to work with and reshape local norms to enable differentiated performance.

I wish it were as easy as most HR departments make it out to be; I wish we could just give people a list of characteristics and they’d magically morph into something different, but it isn’t that simple. The second question I asked, What will make them change?, points to why typical approaches to performance improvement don’t work. Research by BJ Fogg at Stanford shows us that behavior is systemic. It is not as simple as “free will” would suggest; we are shaped by systems around us—people, expectations, and places. To demonstrate this playfully, what is the difference between a Disco and a Church? They both have wine and music, but people behave wildly different in the two settings. Social context defines what we do, and how we do it.

Bob Kegan and Lisa Lahey’s book, The Immunity to Change, points to the culprit. The vast majority of us, despite our IQ, EQ, or any other “Q,” are captive to the social systems in which we operate. We may push back, we may just fit in, but our work lives are defined by the social norms within which we find ourselves. I call this the “Tyranny of the Status Quo.” Organizations often can’t change, they can’t execute new initiatives and practices, because organizations are collections of tribes who operate in their own, socially-defined ways. These tribes adapt or morph mandates from Head Office to fit their local practices and ways of working, whether we like it or not. Unlike the typical, abstracted approaches to impacting performance in organizations, Routines rely on the language and practices of this social system to change the social system.

It is not as simple as “free will” would suggest; we are shaped by systems around us—people, expectations, and places.

The power of the social system is visible in a number of places in organizations, but its most entertaining manifestation tends to happen in face-to-face learning programs. Having delivered thousands of Executive and Leadership Development programs over my career, I’m always intrigued by how highly “building new relationships” ranks in the “Happy Sheets” (or survey assessments) that organizations use to assess the success of programmatic learning. Almost without exception, “Networking” or “Building new relationships” ranks at the top of these assessments. People thrive on expanding their relationships, and their tribal connections, within a place. Routines seize on this tendency and use the language and practice of the best people in the organization to redefine performance in operational, day-to-day terms.

People “get” Routines, because Routines are contextualized to the language and the places where they work. While there are common patterns across organizations, the nuance of every organization (and its social systems), tends to cultivate vital differences in which routines matter, and what they look like when they’re done well. People want to improve in Routines, because they see the realities of their social system in these moments, and they –too—want to become high performers. So next time you’re thinking about identifying your high potentials and sneaking them away to a private retreat for a special “high potential program,” think twice. They are the ones that have likely developed the routines needed to navigate your organization incredibly effectively, and these routines can be codified to the raise performance of leaders at their level across the board. They may be the key to helping you understand how to make everyone in your organization better.