Willpower Is an Outdated Model of Success: Here's the Future of Self-improvement

"It's no wonder willpower has been placed under the media spotlight as essential to success. In a negative environment, willpower's all we have left. It's the life-raft, the backup parachute. And we're depending on it to save our skins. It takes a lot of willpower to remain positive in a negative environment. It's difficult to constantly say no when those around you are eating junk food. Or even worse, when you're required to exert willpower in your own home because you bought junk food you knew deep down you didn't want to eat. This is a huge waste of mental and emotional resources. Instead of being told to change their environment, the prominent self-help advice continues to charge people to change themselves. I can't emphasize enough how terrible this advice is. It's actually impossible to change yourself without also changing your environment. Your environment and you are two indivisible parts of the same whole." 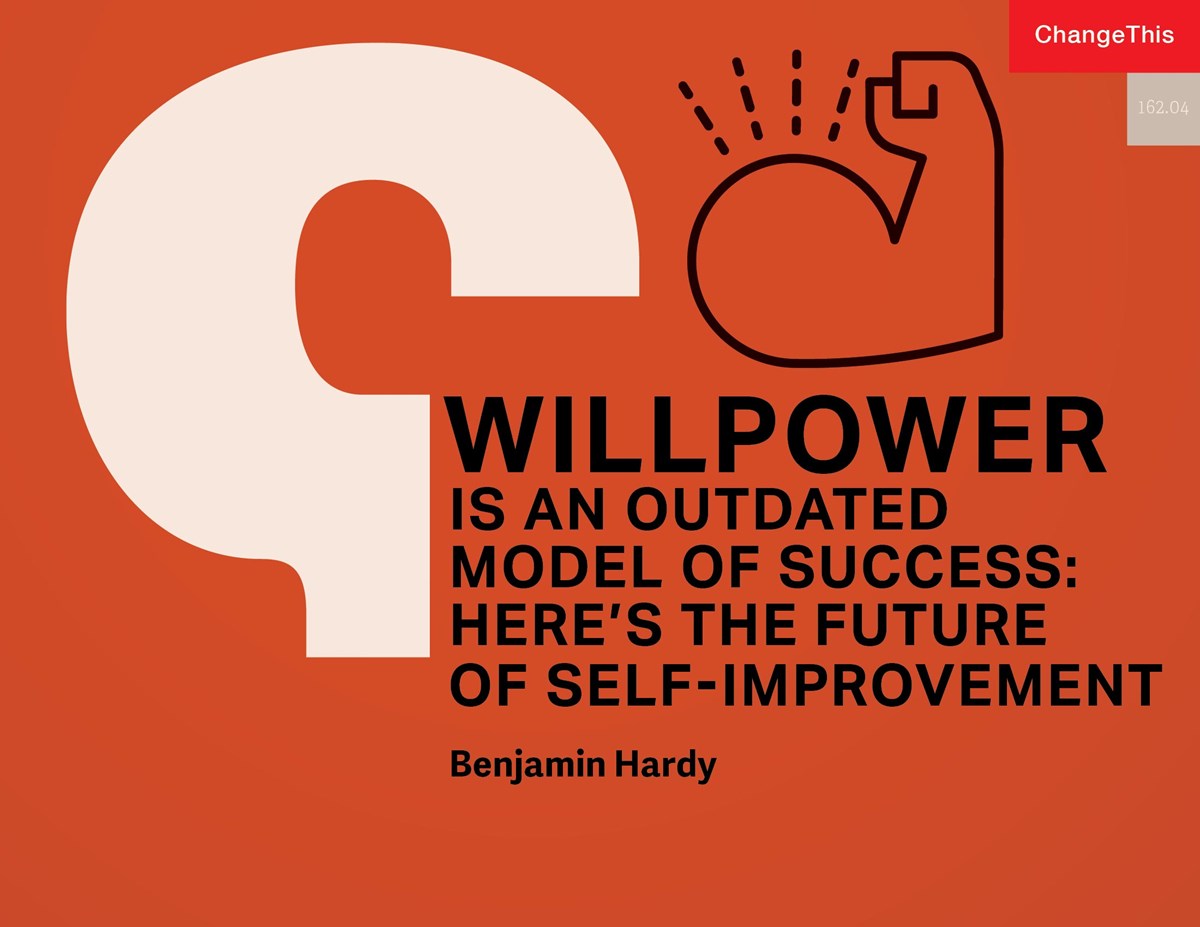 Throughout the better part of the twentieth century,

scientists believed that if you wanted to change a person’s behavior, the key was changing their goals and mind-sets. “The research was very much focused on trying to understand how to change people’s attitudes,” according to Dr. Wendy Wood, a psychologist at University of Southern California, “with the assumption that behavior change would just follow.” The result was a plethora of scientific research and public health campaigns (and countless self-improvement books) about how to improve your attitudes and set better goals.

The result? A whole lot of nothing for most people.

Focusing on goal-setting and attitude only works for a small subset of behaviors, according to Dr. David Neal, a psychologist at Duke University. This small group of behaviors are the ones you rarely perform, such as giving a public speech. The reason mental techniques and strategies focused directly on goal-setting are generally unsuccessful is because nearly all of your behaviors are outsourced by your environment. When you do something enough and in the same places, it becomes subconscious.

When you’re first learning how to do something, such as driving a car, you are required to focus your conscious attention on your behavior and to exert a great deal of effort. You’re required to think about each and every little detail, such as how hard or soft you push the gas pedal.

However, eventually and after enough repetition, your behavior becomes subconscious, or what psychologists call, “automaticity.”

Although automaticity is essential to living and learning, it has its drawbacks. Most people have outsourced and automated their behavior to an environment that contradicts their desired goals. It is for this reason that New Year’s resolutions and goal-setting rarely work. A person may want to stop smoking, but their environment triggers them to smoke at random and unexpected intervals. Willpower is expended and exhausted, and this person is left feeling like a loser.

However, when you outsource your behavior to a goal-enhancing environment, desired behavior becomes automatic and subconscious. Automaticity works in your favor. Once this is the case, your working memory is freed up to meditate and plan for other things. You no longer have to continually focus on your immediate surroundings. You’re no longer fighting simply to maintain the status quo. Rather than paying rent and living day to day or moment to moment, you can invest in much bigger and better things because your environment automates the behaviors that maintain your success and inner peace.

When you outsource your behavior to a goal-enhancing environment, desired behavior becomes automatic and subconscious. Automaticity works in your favor.

It’s no wonder willpower has been placed under the media spotlight as essential to success. In a negative environment, willpower’s all we have left. It’s the life-raft, the backup parachute. And we’re depending on it to save our skins. It takes a lot of willpower to remain positive in a negative environment. It’s difficult to constantly say no when those around you are eating junk food. Or even worse, when you’re required to exert willpower in your own home because you bought junk food you knew deep down you didn’t want to eat. This is a huge waste of mental and emotional resources.

Instead of being told to change their environment, the prominent self-help advice continues to charge people to change themselves. I can’t emphasize enough how terrible this advice is. It’s actually impossible to change yourself without also changing your environment. Your environment and you are two indivisible parts of the same whole.

The Next Evolution of High Performance and Achievement

It seems the “cutting edge” of self-improvement is based on psychological research of the 1960s, ’70s, and ’80s. Continuing to focus on mind-set, willpower, and goal-setting is an outdated and misplaced approach to success. It’s not that these strategies are inherently bad. Rather, it’s that the focus is entirely wrong. Most self-help guides put all of the pressure on the individual.

The next evolution of high performance and achievement takes the focus off the individual and places the environment at the forefront. Thus, ironically, the future of self-help will not be focused on “the self,” but rather, will be focused on the environment that shapes the self. At the core of this new thrust will be the installment of enriched environments.

Conversely, when you’re in an ordinary environment, your desired behavior is not automated and outsourced. In most environments, you must remain conscious of what you’re doing, and thus, you must use willpower to act in desired ways. That’s because most environments are optimized for distraction, not high performance and growth.

Change from the Outside-In

For a long time, psychologists believed there was a one-way relationship between the mind and body. Where the mind went, the body followed. However, recent research is showing that the relationship goes both ways. Yes, the mind can influence the body, but the body also influences and directs the mind. Consider the work of psychologist Dan Ariely, who explains a concept called “self-signaling” in his book, The Honest Truth About Dishonesty. Self-signaling is the notion that we, as people, don’t know ourselves as much as we’d like to think we do. In actuality, we judge ourselves and our character the same way other people judge us, as Ariely explains, “inferring who we are and what we’re like from our actions.”

Purposefully acting in ways you know will influence your psychology is what psychologists call “pre-cognition.” The idea is quite simple: something happens before, or “pre,” the cognitive and emotional state. In other words, you can purposefully trigger, manipulate, and predict your inner experience through the use of specific behaviors. If you want to feel motivated, for example, all you need to do is clap your hands intensely for a few seconds, sprint around your house, and take a cold shower. Ask someone on a date, and regardless of the outcome, you’ll see yourself as someone who takes risks. This shift in psychology will then alter future decisions.

Just as your body and mind have a two-way relationship, you and your environment also have a two-way relationship. When you change a part, you change the whole. Your environment largely triggers your mental and emotional state. Consequently, you can predict how you will feel in certain environments and around certain people. For example, when I’m in new and interesting places and surrounded by amazing people, I feel inspired and motivated. When I’m at a spiritual place, I am contemplative and often humbled. Precognition, then, is about anticipating and creating your future psychological state by shaping environmental factors in the present.

My friend Nate, who is a successful real estate agent, decided to try a personal experiment testing how his life would change by making a tweak to his environment. Despite making six figures, he’s an extremely frugal guy. For years, he drove a beat-up Toyota Camry from the 1990s. The car ran great and the gas mileage was fantastic. But the car didn’t create an environment of confidence in Nate’s prospective clients.

His experiment was to upgrade his car and see how it affected his business. He spent over $110,000 on a decked-out Tesla. Four very interesting changes happened within one month following his investment:

By shaping his environment, he consciously created a self-fulfilling prophecy in real time. He created an environment that was now creating him.

Precognition was Nate’s key to rapid transformation. He didn’t know before buying the car the exact effects it would have, but he anticipated that his new environment would change him internally. Which is exactly what happened. Over a short period of time, Nate’s identity and personality changed. Despite already being one of the top salesmen in his entire region, once he bought the Tesla, he quickly became the top salesman in his region.

Of course, not everyone is in a position to buy a Tesla. But this same principle can be applied in a myriad of ways. For example, by simply wearing different clothes, you’ll feel different. If you want to feel more confident, dress better. Wear a little cologne or perfume. Do your hair differently. Small external tweaks have the power to create enormous internal shifts. You can then leverage these internal shifts to further alter your external environment for the better, thus creating a virtuous upward cycle of personal transformation.

“People’s inflated belief in the importance of personality traits and dispositions, together with their failure to recognize the importance of situational factors in affecting behavior, has been termed the ‘fundamental attribution error.’” – Lee Ross, The Person and the Situation

The power of environmental influences are extremely ignored or down-played in Western culture, which is highly individualistic. And this is to the detriment of most people. If, however, you focus on environmental design, you can consciously evolve into the person you want to be.