A Guide to Success for the Defiant, Dangerous, and Different.

“Instead of doing everything people told us we should be doing, we did the opposite. Instead of burying vices like our obsessive perfectionism, rebelliousness, and weirdness, we made them our selling points.” 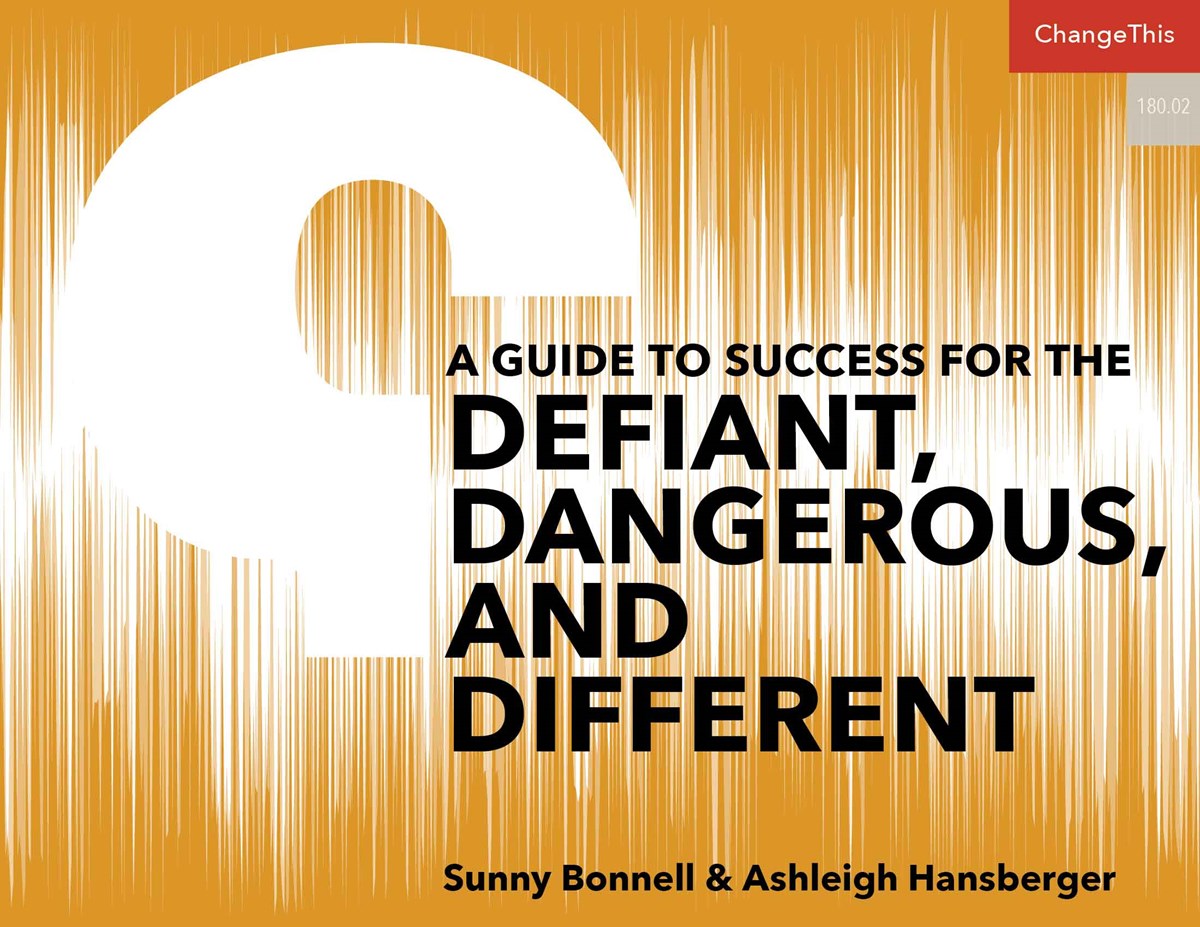 We met as teens in the mid-1990s, strangers who had each spent our childhood marching to the beat of our own drum, and it was life-changing to find someone who moved through life in the same way.

One thing we had in common: entrepreneurship. It ran in our blood. Both our fathers and grandfathers had grown humble businesses from nothing into huge successes. From an early age, we witnessed the extreme highs and lows of running a company. We had ringside seats to the individual accomplishments, failures, and sacrifices they made.

Still, it made no sense for us to drop out of college in our early twenties, just shy of our degrees, to launch a branding agency with $250 and zero experience, right?

So that’s exactly what we did.

We called our agency Motto. A motto is a short statement that encapsulates the beliefs of a person or organization—it’s a war cry. The name had symbolic significance and communicated the kind of company we wanted to build.

From the beginning, we were swimming against a rip current of doubt. People said we were too young, too female, too inexperienced, and too broke to succeed in a world where sixtyish admen made the rules. The only ones in our corner were our parents, and even they had worried eyes.

We started looking for role models in our industry, but the blueprint in our small, South Carolina town was old-school advertising agencies run by the old guard. We studied their work, but the more we learned, the less inspired we were. It was tired, static, homogenized, and templated. These guys were established, but slow and self-congratulatory. They were big, impressive balloons, and we were sharp knives. So, with a motto stolen from Charles Bukowski—“What matters most is how well you walk through the fire”—we set out to change the conversation.

The ink on our business cards had barely dried before we started throwing haymakers at industry tradition. Other agencies worked out of lavish office suites; we set up shop in a shady part of town, in a tiny room inside an industrial warehouse. They had investors; we rolled pennies. They had hundreds of clients; we had none. We knew businesses were desperate for a different approach to branding. We just had to prove it.

“One thing we had in common: entrepreneurship. It ran in our blood.”

There was just one problem…no one knew who we were.

To survive, we needed a Hail Mary.

It came in the form of a six-by-nine-inch paper garbage can. In an era when Yellow Page ads were all the rage, we spent the only money we had on a direct mailer. We designed it to look and feel like a galvanized metal garbage can, and when you pulled the lid the copy read “Trash the Ordinary” in a handwritten font with our phone number and web address. Nothing else. It was weird and it was brave. After getting our hands on a mailing list of nearby businesses, we mailed each one a copy…and held our breath. Over the next several days, the phone started ringing, and people started showing up at Motto with the can in hand. We earned our first client: an ahead-of-the-curve dentist who wanted to, in his own words, “do something different.” Together, we created an experience-rich, cutting-edge dental brand, a one-of-a-kind in our area. That success marked the first of many disruptions across traditionally unsexy categories such as law, real estate, audiology, hospitality, and food and beverage.

If it could be challenged, we would declare war on the ordinary.

After we won a big competition, earned some awards, and received copious amounts of national press, people got curious.

Business-as-usual pushed back, hard. If you’ve ever lived in a small town, you’ll understand. Small towns are notoriously locked down by established players. We had no clue we were a threat.

After a while, we started to keep score:

We were learning the hard way that vision, dangerous thinking, and defiance of the status quo come with a price. It made the first several years of building Motto a roller coaster. To broaden our appeal, mentors and family members suggested we dial back our crazy ideas. Take whatever work we could get our hands on. Don’t ruffle feathers or have such strong opinions. Be like everybody else. You have no idea how close we came.

After admitting life had kicked out every ounce of heart left for the business, Sunny’s dad, one of our greatest mentors, warned us: “You two are a rare breed. Not everyone will love you. Some may hate you. But the ones who get you will never forget you. Now, dust yourselves off and get back in that saddle.”

That message changed everything. Of course people didn’t get us. We were doing things differently—breaking rules and vandalizing traditions. This was our identity, and we needed to own it. Instantly, we became more confident in tearing up the rule book, running our business on our own terms, and being who we were—not who we were supposed to be.

Instead of doing everything people told us we should be doing, we did the opposite. Instead of burying vices like our obsessive perfectionism, rebelliousness, and weirdness, we made them our selling points.

Eventually, we turned our attention not just to branding, but to leadership and identified a connection between the spirit of the person at the helm of a company and the brand experience that company created for its customers. This fascination with leadership quickly became the linchpin of our branding business. We became experts at helping leaders harness their superpowers, turning their businesses and brands into the “rare breed,” or standout, in their category.

In fifteen years at Motto, we’ve helped hundreds of leaders unlock their potential by tapping in to what makes them unique. In doing so, we found many of them to be obstinate, temperamental, melodramatic, and ruthless. For these swashbuckling visionaries, believing “six impossible things before breakfast” wasn’t just a line from Through the Looking-Glass, it was a business plan—hell, a life plan.

After a while, we realized that not only were the difficult ones more interesting to work with, but they also tended to be fearless entrepreneurs who inspired us with the audacity of their ideas and the intensity of their passions.

Being defiant, dangerous, and different is a gift.

That epiphany was another game changer. Success is no longer the purview of the Harvard MBA graduate. You don’t need degrees or titles or venture capital. You just decide and act, and you can change the world because of it. Whether you’re building eye-popping innovations with Kickstarter cash, filming award-winning documentaries with your iPhone, or launching social movements on Instagram, you don’t need permission to lead or succeed. You can change the conversation not by suppressing your vices, but by owning them.

Being a leader no longer means getting someone’s seal of approval or following an accepted glide path. It means going all-in on who you are, grabbing the mantle of your career, and saying, “I got this.”

People like that…are what we call the Rare Breed.

“Of course people didn’t get us. We were doing things differently—breaking rules and vandalizing traditions. This was our identity, and we needed to own it.”

At the heart of this definition are seven “vices”—traits that conventional wisdom regards as dangerous and counterintuitive to your success—that we’ve called Virtues. They are the keys to being a Rare Breed:

Of course, nothing good comes without risk, and each of the Virtues also has a dangerous duality. For Rare Breeds, the impulses that uplift can also undo. Set loose without morality or control, hot-blooded passion can lead to rage and reckless acts. Charisma can spiral into a force that manipulates and defrauds. Obsessive perfectionism can lead to compulsive behaviors, endless work, burnout, and alienation.

What separates Rare Breeds from everyone else is one simple truth: while others may suppress their quirky, oddball, qualities, Rare Breeds celebrate theirs. They let them off the leash, break the windows of conventional wisdom, and run like hooligans through the corridors of entrenched power.

If you’re reading this, you may be young and eager, ready to shake things up and put the world on notice. Or you may be enjoying some success and wondering what’s next. Maybe you’re smarting from a failure and trying to figure out how to stage your comeback. Or you may be an experienced leader or executive feeling like you’ve hit a wall and asking, “What more can I do?”

Know this: you are not average. You already have what it takes to succeed and stand out. Own it. Learn to accept and love yourself for who you are: worthy and valuable, “vices” (Virtues!) and all. Don’t just march to the beat of your own drum; build your own drums out of wire, garbage, and spare parts.

There are as many ways to be a Rare Breed as there are people who know they have more to give to the world. 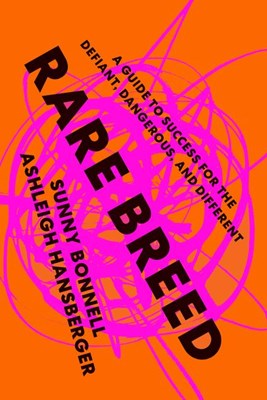 Rare Breed: A Guide to Success for the Defiant, Dangerous, and Different