Why Women Are Especially Well-Suited for Professional Partnerships

"Women and their relationships are especially ripe for professional partnerships. The reason that these pairings aren't the ones we're quick to reference has everything to do with a workplace culture that has, for as long as it's existed, privileged men and their approach to business. But slow and steady progress toward dismantling male dominance at the office has carved out space for women to collaborate instead of compete professionally, and that's set the stage for change." 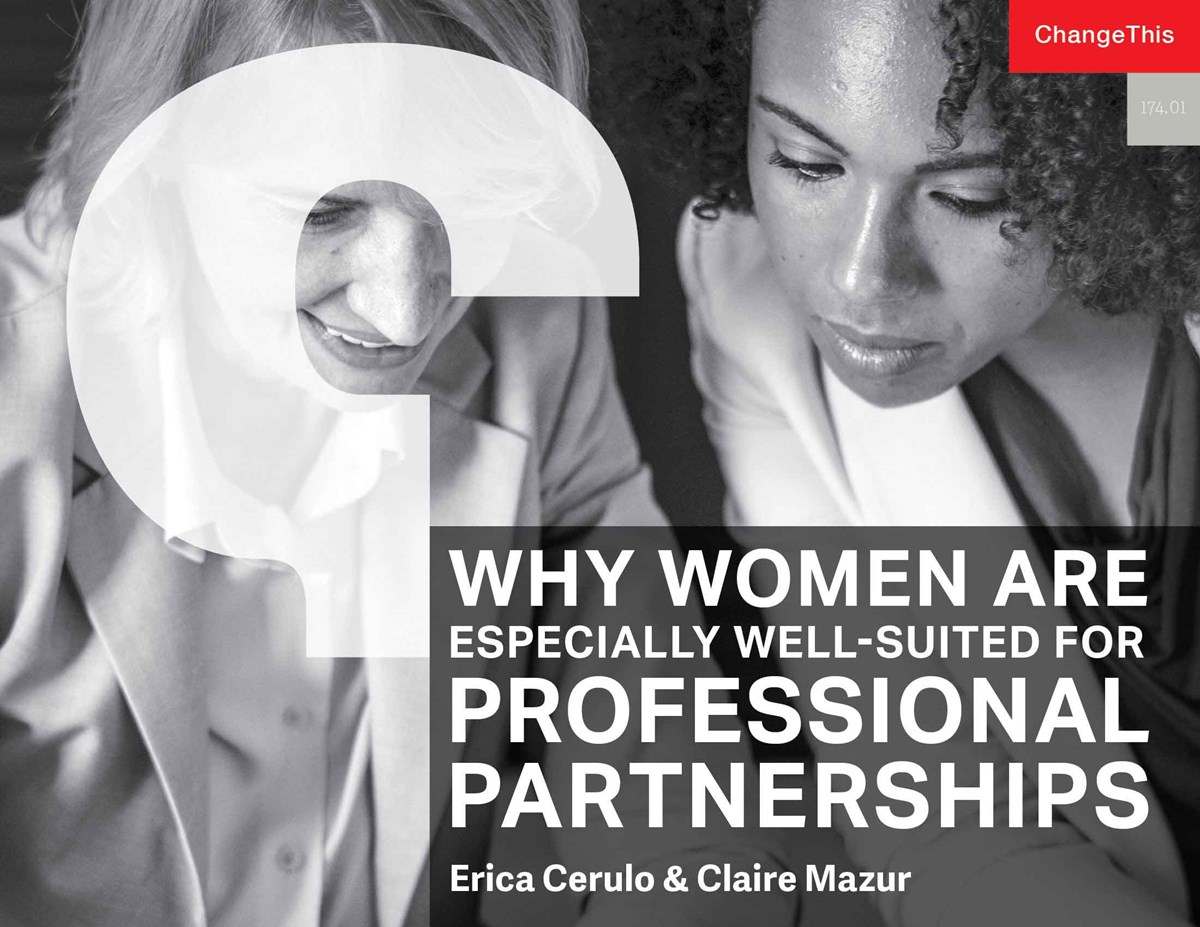 When taking a stroll down the business-partnership hall of fame, many of the names that jump to mind are likely male ones:

Jobs and Wozniak, Gates and Allen, Procter and Gamble, Ben and Jerry. With this rich history of two men coming together to build something from nothing, often in a garage in Silicon Valley, as the lore goes, a person would be justified in presuming that there is something about the nature of the way that men work and form relationships that makes them especially good at forging professional bonds that provide fertile ground for building something big.

But in researching and conducting the interviews for our book Work Wife: The Power of Female Friendship to Drive Successful Businesses, we found support for a different idea altogether: that it’s women and their relationships that are especially ripe for professional partnerships. The reason that these pairings aren’t the ones we’re quick to reference has everything to do with a workplace culture that has, for as long as it’s existed, privileged men and their approach to business. But slow and steady progress toward dismantling male dominance at the office has carved out space for women to collaborate instead of compete professionally, and that’s set the stage for change. As more and more women have taken the opportunity to form meaningful partnerships with one another, they’ve started to reveal the power that those pairings can have and to shift perception of what it looks like when women work together.

Certainly, as two women who started our own company, Of a Kind, and deem our partnership our most impressive career accomplishment, we are apt to think there is something special about the bond we share and the business we’ve built on the back of it. But we noticed there are more and more modern examples of women taking the same path, from celebrity pairings like Oprah and Gayle, Abbi and Ilana, Kathie Lee and Hoda, and Tina and Amy to entrepreneurs like Elizabeth Cutler and Julie Rice of SoulCycle, Betsy Beers and Shonda Rhimes of Shondaland, Audrey Gelman and Lauren Kassan of The Wing, and Stephanie Korey and Jen Rubio of Away. We were not alone in seeking—and finding—value in this paired pursuit.

Further, the embrace of female partnership isn’t happening only amongst those running the show. “Work wife,” a term spawned from “office wife”—which itself dates back to the 1930s, when it was used by men to describe an especially high-functioning secretary—is taking on new meaning in our current era. Its connotation has evolved just as office culture and marriage have, and more recently it’s been co-opted to describe a combination of personal and professional bondedness and healthy, supportive closeness among women, and it is used by bosses and assistants alike. We’ve seen the embrace of the label “work wife” by women with side-by-side cubicles at publishing houses and those who run meetings together at financial institutions. As of January 2019, there were nearly 200,000 posts on Instagram with the tag #workwife, the bulk of which picture two or more women.

Workplace opportunity and an evolving culture might be to thank for creating an opening for women to partner up professionally (officially or not), but various recent studies have shown that women are uniquely suited to benefit from developing these relationships. We pursue cooperation and friendship, navigate the personal and professional, and deal with stress in different ways than men. As a result, we’re bolstered by close, workplace collaboration—especially when that collaboration privileges vulnerability.

Before we dive deeper into the research, one caveat: We rely on the concept of feminine traits to make our case here, but that’s not intended to disregard that claiming anything as inherently feminine is a loaded and at times problematic act. In a culture where we’ve come to acknowledge that biology does not determine gender, claiming that it somehow determines personality may seem at best outdated and at worst discriminatory. Class, race, age, ability, and the advantages and privileges, or lack thereof, that attend them add another layer of complexity. For our purposes, we’re looking at feminine traits—and the friendships that follow from them—as reflections of how most women in the United States and the Western world at large have been socialized, by way of their upbringing, the media, or social norms. Our definition of “woman” includes anyone who identifies as such. Gender stereotypes and expectations can be constricting, exhausting, and disempowering; rather than reinforcing them, we hope to better understand the ways in which they inform us—specifically in our relationships and in our work—and to use that understanding to effect change and progress for everyone.

“Slow and steady progress toward dismantling male dominance at the office has carved out space for women to collaborate instead of compete professionally, and that’s set the stage for change.”

As follows, there are three findings that, combined, speak to the potential of female partnership and the professional success it can sow:

1. Women have been socialized to enjoy collaboration and to be more emotionally accessible.

In 2013, the National Bureau of Economic Research embarked on a study to answer the question “Are Women More Attracted to Cooperation Than Men?” and the quick answer was “Yes.” To speak, for a moment, in sweeping generalizations: Women do worse in competitive environments and better when part of a team. And unlike men, who, the same research shows, tend to prefer to work alone, women like collaborating. Numerous studies suggest that this inclination is in line with how we’re socialized: Men are brought up to be more competitive, independent, and unemotional, while women are raised to be more supportive, cooperative, and emotionally sensitive.

In turn, that informs what we look for when it comes to friendship—women bond by sharing feelings, not just activities, which is how men tend to engage and sustain friendships. By bringing emotions to friendships, including those formed in the workplace, women make themselves vulnerable and naturally start to blur the line between the personal and the professional. Which brings us to the next point…

2. Our modern world has forced a fluidity between the personal and the professional, and women are better equipped to navigate that.

While the concept of leaving personal issues at home when heading to the office might sound appealing in theory, a clear personal-professional delineation is almost laughably unachievable for anyone in an era when we’re Facebook friends with our colleagues and respond to meeting notes from our laptops while watching television.

Though this work-life blurring has its downsides, research suggests that workplace friendships, which it lays the groundwork for, are indeed good for business—a boon for engagement, productivity, and satisfaction. Per a 2014 survey of 716 random paycheck-earning Americans conducted by the management and employee engagement company Globoforce, 71 percent of the people with friends on the job said they loved the companies they worked for, but only 24 percent of those without in-office pals had the same affection for theirs. And it’s not just that people enjoy working with a friend, either. It’s that when they do, their quality of work is better. “Those who [have a best friend at work] are seven times more likely to be engaged in their jobs, are better at engaging customers, produce higher-quality work, have higher well-being, and are less likely to get injured on the job,” write the authors of Wellbeing: The Five Essential Elements, a New York Times bestseller drawn from Gallup studies that span 150 countries.

Unsurprisingly, it’s women, predominantly, who own this realm: One study found that 63 percent of office friendships are female-female. (Outside the office, men also have fewer close friends than women do.) In a modern workplace, this gives them a leg up: They are more committed to their work, more engaged with their work, and are doing better work as a result of the interpersonal bonds they’ve developed, and this is a real win when the going gets tough.

“Research suggests that workplace friendships … are indeed good for business—a boon for engagement, productivity, and satisfaction.”

3. Close bonds help women better weather professional struggles because they have a tend-and-befriend—not fight-or-flight—response to stress.

In the late nineties, Shelley E. Taylor, a psychology professor at UCLA, took a closer look at the widely accepted and understood primal instinct of fight-or-flight when a postdoc student of hers noticed that animal stress studies were conducted using only male rats. Delving into similar published studies on humans, Taylor et al. found that before 1995, women made up only 17 percent of the subjects.

In a groundbreaking paper published in the Psychology Review in 2000, Taylor and her colleagues offered a new theory: “We propose that human female responses to stress (as well as those of some animal species) are not well characterized by fight-or-flight, as research has implicitly assumed, but rather are more typically characterized by a pattern we term ‘tend-and-befriend.’ Specifically, we suggest that, by virtue of differential parental investment, female stress responses have selectively evolved to maximize the survival of self and offspring. We suggest that females respond to stress by nurturing offspring, exhibiting behaviors that protect them from harm and reduce neuroendocrine responses that may compromise offspring health (the tending pattern), and by befriending, namely, affiliating with social groups to reduce risk.” Basically: Women, unlike men, don’t respond to stress by getting combative or bolting—instead, we nurture, protect, and bond, all in the name of survival. That said: Taylor’s theory is predicated on an essentialist narrative steeped in a biological definition of womanhood that starts to fall apart when viewed through a more contemporary understanding of gender, a social construct. But like it or not (and we don’t), it’s also hard to ignore that even the most modern notions of socially conditioned femininity are strongly tied to the role of motherhood that this theory places front and center.

In a business setting, where dilemmas present themselves on a daily basis, the tendency toward tend-and-befriend is a tremendous boon. It means a willingness not only to hunker down and address issues head-on but also to care for and soothe one another as part of the process. It provides a framework for solving problems, safeguarding relationships, and prioritizing self-care.

It’s our hope that this study reveals the unique potential of these partnerships to ride out the lows that come with any business pursuit so that in ten or twenty years time, prominent instances of female partnership are commonplace in the working world—and that those examples pave the way for many more to follow. Even more than that, though, we take this research and the growing body of women providing their own data points to suggest that by working together, women remake their careers, their lives, and the business world on the whole.