Unfear is not about eliminating fear. The goal is to shift the story we carry within us about fear and to see the opportunity for learning and growth that fear offers us as an individual, a team, and an organization. 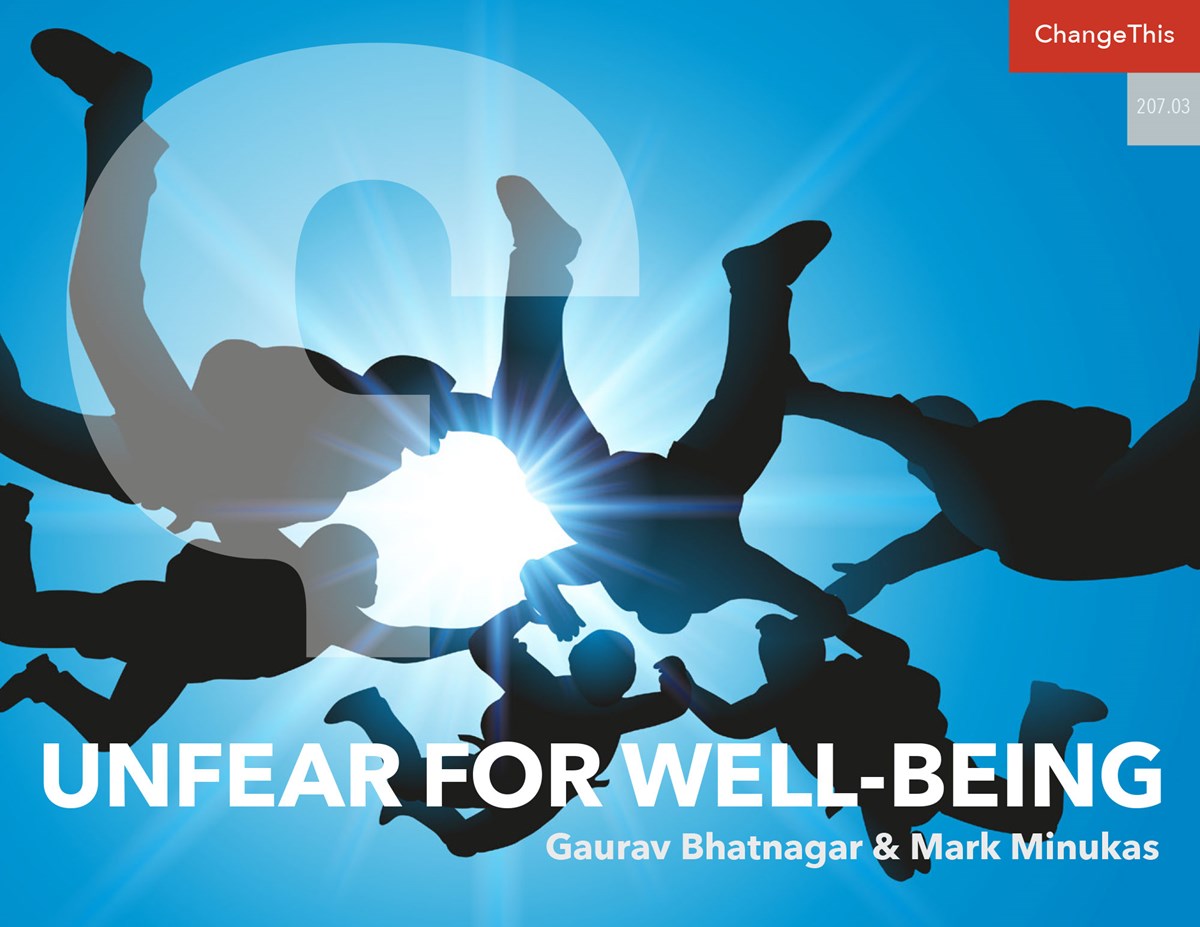 Fear itself is not the problem.

Negating or ignoring fear can get us hurt or worse. But becoming overly fearful is detrimental to our growth and development. And that holds true for both individuals and organizations. The solution is to tranform our relationship with fear. Fear itself is just an emotion, which is neither good nor bad. It is necessary to understand the underlying message beneath our fear and to make different, more positive choices in the face of that fear.

Whenever we ask our clients to recall a time when they were part of a high-performing team, they usually tell stories about intense, hard-working environments where team members frequently had constructive debates about different ideas and ways to move forward. They talk about groups that didn’t let relationship conflict or stress get in the way of their work and situations in which they could have honest disagreements with their colleagues without any fear that the colleague would take their comments personally. In short, they describe a team that could effectively engage in challenging conversations about performance, attitude, alignment, direction, and strategy. These conversations promote well-being within a team. If team members feel that they can’t address an issue with their colleagues, they will suppress their emotions, obsess over them, and let them fester and grow. This poisons team members, creates unproductive stress, and makes it more likely for work to impact them when they get home because they can’t process and let go of whatever is bothering them. Alternatively, they might have that difficult conversation, but in a clumsy, aggressive manner. When they do that, they merely spread the poison to the rest of the team.

Teams that operate on fear prevent these conversations from taking place. For example, we once worked with the leadership team of a global leader in healthcare. Even though the company was a leader, its revenue was stalling, and the board didn’t like the company’s prognosis. The board hired a new CEO, who was a turnaround specialist, to help get the company back on track. Right after becoming CEO, he implemented a series of unilateral actions and replaced almost 70 percent of the leadership team. If something went wrong in any department, he would fire its leader immediately. In doing so, he created a culture in which the leadership team couldn’t make any decisions without his direct approval.

The more trust there is within a team, the more effective it becomes at difficult conversations.

In fear for their jobs, nobody questioned the CEO or offered new ideas for improvement (in other words, they didn’t have any difficult conversations). The senior leaders didn’t trust the CEO to have their backs if a risk didn’t pan out, so nobody took any risks. In the short run, everyone worked so hard that the CEO managed to turn the company around. He took this as proof of concept and became more entrenched in his way of operating. As time went on, because nobody engaged in difficult conversations, the business stagnated again. This only confirmed the CEO’s belief that he couldn’t depend on his team, so he drove them even harder. He started speaking negatively about his team members behind their backs, leading to an even greater breakdown of trust. This pulled the team and the entire organization into a downward spiral. It gummed up decision-making, created silos, and resulted in costly strategic mistakes. The CEO felt a great degree of fear and pressure to turn the organization around and pushed that down the corporate ladder. Eventually, it hurt performance so much that, as we write this, the board is considering letting the CEO go.

We call this pattern the CEO fell into “the vicious fear cycle,” where someone reacts to a perceived threat with aggression or apathy, which lowers the degree of trust within the organization and makes it more likely for others to take the same approach (Figure 1.1). The cycle often goes unnoticed because the aggressive/apathetic responses work in the short term. But they erode results over time. However, when we unfear, we flip this cycle. Threats become opportunities for learning and growth, the team has effective difficult conversations, and this bolsters trust and leads to more effective conversations in the face of new cues for learning.

Over a long-enough period of time, fear that causes individuals and teams to show up in a less-than-ideal way will eventually show up in a company’s bottom line.

There are three primary reasons this happens: (1) fear leads to poor long-term strategy, (2) fear creates an environment that prevents a company from developing an inclusive, diverse culture, and (3) fear massively reduces employee engagement.

POOR LONG-TERM STRATEGY. When organizations and business leaders are in the throes of fear, they engage in a range of reactive responses that are ineffective. Some common reactive choices include:

When organizations and business leaders are in the throes of fear, they engage in a range of reactive responses that are ineffective.

SUBOPTIMAL CONVERSATIONS ON DIVERSITY, EQUITY, AND INCLUSION. Greater diversity, equity, and inclusion (DEI) are not just moral imperatives, they also carry significant utilitarian benefits. A study by McKinsey & Company and the Society for Human Research Management (SHRM) evaluated the performance of organizations with different levels of workplace diversity. The study found that organizations that exhibit gender and ethnic diversity are, respectively, 15 and 35 percent more likely to outperform less diverse organizations.6 And yet many organizations struggle with this issue. In private conversations with us, senior leaders from several organizations across industries acknowledged that employees often view discussions of DEI as a minefield. We’ve heard that people of color are weary of these conversations because far too often they only result in someone saying something that opens an old wound, whereas workers from more privileged backgrounds are afraid to engage because they don’t want to make a mistake and say the wrong thing. As a result, people either never have these conversations or only engage in them superficially. A standard vocabulary around diversity and inclusion has spread throughout many large corporations, and it is far too easy for people to parrot these buzzwords without making any real changes to how they see the world and behave within it.

It’s important to understand that having these conversations in a way that can create real change requires a tremendous amount of vulnerability—on all sides. It takes great skill in managing your own fear to have open conversations on difficult topics, to listen deeply to others, to empathize, and to understand the underlying fears and humanity we all share.

LACKLUSTER EMPLOYEE ENGAGEMENT. As a valuation expert and collaborative consultant, David Bookbinder writes in The New ROI: Return on Individuals, “The value of a business is a function of how well the financial capital and the intellectual capital are managed by the human capital. You’d better get the human capital part right.”7 To get the most out of the human capital, you need employees to be engaged enough to put in discretionary effort: to go above and beyond their job descriptions, to find ways to improve their processes, and to bring all their creativity to work with them. When there is a great deal of fear in an organization, especially interpersonal fear, employees put in far less discretionary effort. Rather than leaning into difficult situations, employees lean back and wait for someone else to make decisions and act.

Unfear is not about eliminating fear. Even if this were possible, it would be counterproductive. The goal is to shift the story we carry within us about fear and to see the opportunity for learning and growth that fear offers us as an individual, a team, and an organization. Accomplishing this shift results in a dramatically different organization—an unfear organization.

Gaurav Bhatnagar is the founder of Co-Creation Partners and has dedicated more than two decades to helping companies thrive and achieve breakthrough performance. Since founding Co-Creation Partners in 2010, he has designed and led programs and workshops for private, public, and social-sector clients across multiple industries, including financial services, basic materials, manufacturing, healthcare, and technology.

Mark Minukas is the managing partner of Co-Creation Partners and works with clients across multiple industries, including financial services, high tech, biotech manufacturing, IT services, and governmental offices, to deliver both top- and bottom-line improvements and build high-performing operations. An engineer by training, he was a Navy officer and member of the US Naval Construction Battalion (Seabees) and the Navy Dive Community.

7. Dave Bookbinder, The NEW ROI: Return on Individuals: Do You Believe That People Are Your Company’s Most Valuable Asset? (Limelight Publishing, September 18, 2017).