What Should I Do Now?
The Power of Prototyping

Prototyping is a modest tool for the lofty goal of testing the future, or for at least testing a question you have about your future. 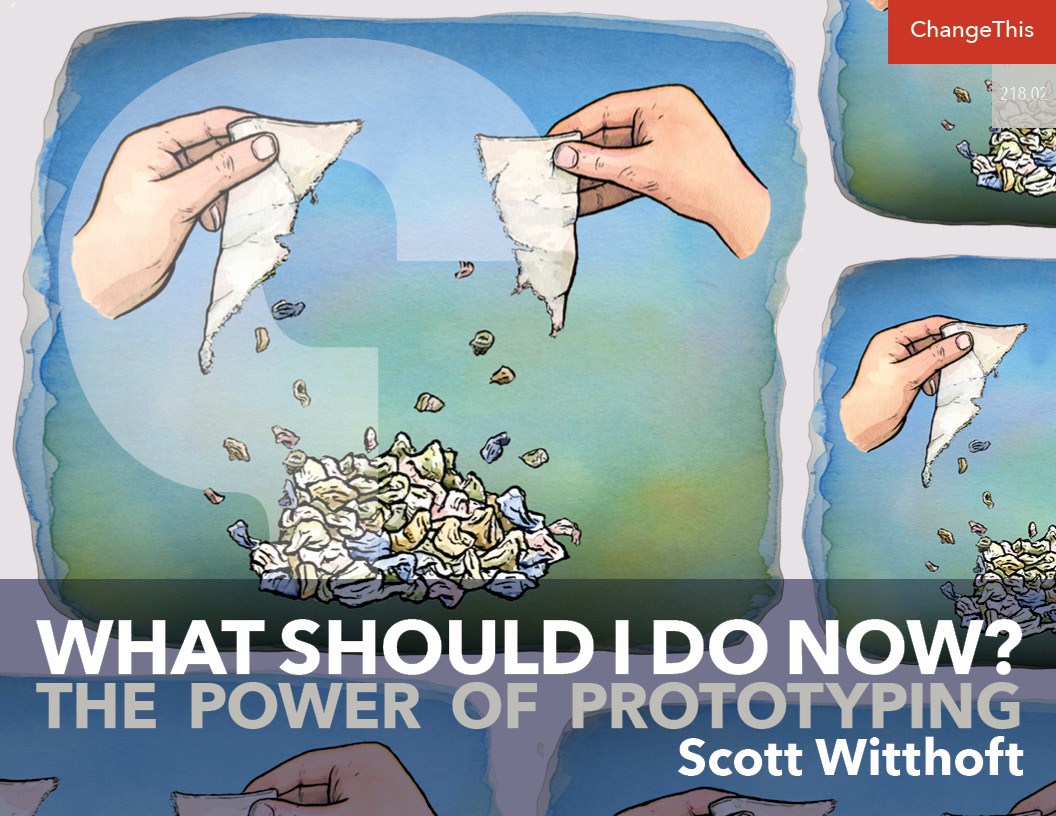 How do you close the gap between I wonder and I know? You make a prototype.

A prototype is a tool that gives you a chance to investigate your ideas and explore what could, should, or would come next, whether you are designing a new product, working out a new routine, or rearranging your furniture. It’s a modest tool for the lofty goal of testing the future, or for at least testing a question you have about your future. Prototyping helps lower the stakes for exploring new questions by reducing risk—using fewer resources like time, money, and emotional commitment—especially when anxiety about outcomes might keep you from starting.

Prototyping is a primary tactic for designers, but it’s a tool that also shows up in faraway fields. Skateboarders and chefs, for example, know that being intentional doesn’t require being perfect at first. A skateboarder tries a new trick: that’s a prototype experience. A chef experiments with a new recipe: that’s a prototype experience. We know from watching both the skater and the chef that the next try comes after understanding what happened the first time. This is a strategy of repetition, not a singular performance. This is also a strategy of learning, with discovery embedded in every outcome. Through knowingly imperfect attempts, prototype experiences illuminate possibilities for your next move.

There is a moment in prototyping when you move from maker to moderator and shift from being the author of an idea to an observer of action. This is a letting-go moment— letting go of something that you made. (Cue the danger.) It is an understatement to say that it is hard to let go of your work, but it is a requirement. Making this transition successfully works best when you celebrate your skills and then step away from what you’ve made to see how it plays out in an experience. Let’s explore how to move from what you’ve made toward making the best out of what you witness. It’s a fresh take on seeing how your work can and will take on a new shape.

Through knowingly imperfect attempts, prototype experiences illuminate possibilities for your next move.

CELEBRATE THE POWER AND JOY OF MAKING

It feels great to build something! Early work often reflects a lack of skill or a low-res approach—the fit and finish are usually a little shabby. You might feel sheepish about the quality but still excited about the effort. That excitement connects to important topics: a maker’s motivations and what it means to do good work. Why do people make things, and what does making mean to them? What does your work mean to you?

Let’s look at Girls Garage to understand this ethos. Emily Pilloton-Lam is an architect, educator, and activist. She founded Girls Garage as an organization to give young girls the tools they need to build anything. In Girls Garage (the book, not the garage), Pilloton-Lam describes a pivotal moment in her own history of making:

In graduate school in Chicago, I walked into the fabrication shop and said, ‘Teach me how to weld.’ I learned how to braze and MIG weld in a matter of days—and haven’t stopped since. Fusing metal felt superhuman and opened up a whole new world of possible ideas to build. Welding taught me (literally and metaphorically) how to bring the fire to my work.

Pilloton-Lam declares, “Your identity as a builder matters. Who you are is not separate from what you build or why. … Bring your heart and your story to what you create, and scream who you are through your tools.”

When you start to build something, you may actually discover a new version of yourself that you never knew existed. It’s critical to understand what you build and why, because your identity as a builder matters. That perspective applies to prototypes, not just perfect products. For many people, the first act of making something is electric, nearly intoxicating in its appeal. The act and recognition of “I made this from nothing” is a profound step in becoming a confident person who feels agency to do it again—and again. The challenge comes in seeing yourself as a person capable of making as a practice rather than someone who made that one thing, that one time.

It’s easy to judge yourself based on what you make, and often the things you build are measured by appearance: If it looks good, you are good.

However, when it comes to making prototypes, the motivations behind how and why you make something are more difficult to evaluate. As we know, the best prototypes often don’t need to be the best built. This challenges a convention that aesthetics alone determines worth. The worth of your creations extends beyond appearance into experience. Moving forward confidently with an understanding of how and why you did your work is one of the most celebratory moments of making… anything.

It is important, however, to note the subtle and substantial tension between being a skilled prototyper and a skilled craftsperson. The prototyper must let go of their crafted work, knowing that it is disposable by definition, in service of learning what must come next. The craftsperson, by contrast, can approach their work with the intent of output as a treasure—embodying the extent of skill in making an object. The prototyper and craftsperson are not mutually exclusive, but their objectives often are. When you are learning a new skill, your output is imperfect, becoming better with mastery. When you are prototyping, your “products” are deliberately imperfect because they are interim tools for learning about other things. It helps to understand the role of each creation or output so that you can reflect and move beyond what you made.

When you are prototyping, your “products” are deliberately imperfect because they are interim tools for learning about other things.

STEADY YOURSELF FOR SEPARATION ANXIETY

Surrendering your work is the first step toward learning from it, marking a shift from being a creator of a thing to a curator of an experience. Turning a trophy into trash does not feel good (and that is only a slightly melodramatic description of making and breaking a prototype). Here’s a lesson to lessen the impact of this reality: designate a deliberate moment to mark letting go of this stage of your work.

Verena Paepcke-Hjeltness is an educator and designer who helps students learn the skills of turning ideas into reality, through sketching, fabrication, and manufacturing. Separating early work from final outcomes is a lesson that she teaches through an exercise in hand rendering—the practice of illustrating high-fidelity, realistic product graphics by hand. As part of a lengthy product development project, students are required to create renderings of their early concepts. At the end of a couple weeks of this work, and immediately following the group presentation of these drawings, Paepcke-Hjeltness requires her students as a group to tear up their final renderings. Tears.

We can learn from Paepcke-Hjeltness’s observations of this painful step:

The idea of tearing up the best sketch is not so much about not falling in love with that idea. It is geared toward not treating the sketch as a final outcome and instead seeing it as the vehicle to get to the final solution. The students often thought the sketch was the outcome, instead of treating it as a means to communicate the final solution.

Erica Estrada-Liou, a mechanical engineer and educator, teaches a complementary technique to avoid becoming overprotective of prototypes and feeling the trauma of letting them go. She describes this approach as “prototyping to invalidate.” It’s a mindset with which a prototyper looks for, and hopes for, ways that their prototypes don’t work. Seeking to invalidate focuses attention on outcomes—lessons that emerge from experiences—rather than on the actual objects. This focus can come in the form of a question, when you or someone else starts asking, “What’s missing here?” Even better is the reaction, “This is terrible. What this really should be is !”*

Prototyping to invalidate sets up a proactive detachment from the thing to create space for discovery. Once you’ve celebrated your work and set it free, it is much easier to learn from it instead of feeling obligated to sell or defend it.

Adapted from This Is a Prototype: The Curious Craft of Exploring New Ideas by Scott Witthoft.
Copyright © 2022 The Board of Trustees of the Leland Stanford Junior University on behalf of Hasso Plattner Institute of Design.
All rights reserved.

Scott Witthoft works as an educator, designer, and author. Drawing from his past practice of forensic structural engineering, he incorporates that expertise with current pursuits in space, furniture, and product design—teaching and speaking widely. He is the co-author of Make Space, a tool for creating collaborative environments. His work has been featured in The Design Museum and publications such as Fast Company, Architecture and Urbanism, and Metropolis.

The Hasso Plattner Institute of Design, known as the d.school, was founded at Stanford University in 2005. Each year, nearly a thousand students from all disciplines attend classes, workshops, and programs to learn how design can enrich their own work and unlock their creative potential. 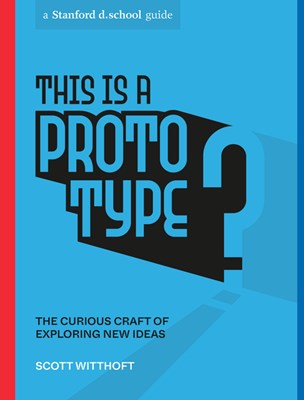 This Is a Prototype: The Curious Craft of Exploring New Ideas