A Q&A with Madeleine Trebenski

Madeleine Trebenski's new book of essays is full of insight and humor. And so is my recent Q & A with her.

Madeleine Trebenski’s new book Do I Feel Better Yet? is a refreshingly sarcastic, witty, and occasionally heartfelt commentary on the increasingly inaccessible and impractical culture of self-care, and the search for the right things to buy for self-actualization. The book reminds me of Mia Mercado’s Weird but Normal and Jonny Sun’s Goodbye, Again, meaning I love it a lot. Each essay calls attention to something in our everyday lives and magnifies it, stretches it out, occasionally embellishes it nearly to the point of unrecognizability, and then lets us laugh at and reflect on these ridiculous (read: human) experiences that constitute our everyday. Do I Feel Better Yet made me laugh at and with Madeleine, followed by feeling a desperate hope for a world with less shame, stigma, and loneliness.

Porchlight Book Company: It felt cathartic to have someone else share their struggles and aggravation with female-focused societal pressures! Especially since you share your experiences after giving into some of those pressures. (I also have found some success in drinking more water.) How did you decide what topics to cover? Were there any you added later on in the writing process that you didn’t expect to include?

Madeleine Trebenski: I mostly chose to write about topics that I had some kind of personal experience with, or things that I’ve seen recommended over and over again. I figured some topics would be more relatable, like being told to drink more water—it’s almost universal advice, whether you’re looking for skincare tips or googling “why do I have headaches all the time?” But I thought people might also be interested in some of my more unusual experiences, like attempting to cure my work-induced anxiety back pain with hypnotherapy.

If there was one essay I didn’t expect to include, it was probably the one about the Smart Roomba wiping out humanity in its attempt to clean the Earth. That one came out late in the writing process because I got a little obsessed with buying a nice vacuum for a few weeks last summer. I managed to convince myself that having the perfect cleaning implement would somehow make my life less of a mess, and once I surfaced from the rush of impulse shopping I realized I had some writing to do on the subject.

PBC: The first two sections of the book are about exercise, eating habits, and diets. The way you write about your experiences reminds me of the sometimes entertaining but also unfair bad reviews that exist for restaurants, landmarks, and state parks. Though most in your book are justifiably negative experiences, do you think you’d give anything a second chance? Maybe you just haven’t tried the right brand or found the right kind of multi-level marketing scheme to become a part of?

MT: The first two sections of the book about exercise and eating habits were some of the hardest for me to write because I know those topics can be so extremely personal for people. Usually, when I write about stuff like barre class or cold-pressed juice, I’m not trying to give a “bad review” of those things themselves, I’m just trying to question some of the ideas that tend to go along them. For example, there’s nothing wrong with doing a barre workout, but the way some studios have the instructors deliver messaging about what they deem to be a desirable body shape deserves to be examined. I’m by no means an expert on this stuff, though, so if you’re interested in hearing much smarter, more nuanced takes than my own on the subjects of diet, exercise, and wellness culture, I highly recommend the podcast Maintenance Phase. The hosts, Aubrey Gordon and Michael Hobbes, debunk and decode the junk science behind health and wellness fads, all while being extremely charming and funny. It’s been a really eye-opening listen for me.

PBC: I think a lot of your book touches on situations where you felt a diminished sense of control. But, ironically, wanting to take more control over your health is what led you into these situations. What is your relationship to feeling a lack of control, and has it changed after the experiences you detail in the book?

MT: When I started trying some of the things I talk about in the book, it was definitely an attempt to regain control over a body that was falling apart from stress and overwork. However, through many of these experiences, good, bad, or otherwise, I ended up having the incredibly basic realization that my mind and body are not two separate entities. That probably sounds so dumb and obvious to you, like duh, of course your mind and body are connected, but I was so busy trying to control both my mental health and my physical pain, that I’d never really made the connection between the two. Now, I at least try to listen to my body and consider why it might be falling apart before I completely panic and stuff it full of supplements and acupuncture needles and whatever else I’ve decided is going to fix me up as fast as possible.

PBC: Fad diets like juice cleanses have been and continue to be exposed as generally absurd ways to lose weight, but there are frighteningly more clandestine ways that women are being misled to the benefit more of corporations than themselves. And if not ill-intentioned, there are so many layers of similar messaging that tell us to change who we are that it all adds up to immense feelings of inadequacy. So, with this dread in mind, what kind of mindset do you put yourself in to write about your own and many other women’s insecurities?

MT: I try to put myself in an inclusive mindset, while still writing from my own somewhat limited personal point of view. People’s experiences with gender inequality/oppression/bias are so wide and varied that I know I’m never going to be able to capture what it’s like for everyone, but I’m always hopeful that there will be some people who are able to relate to the personal experiences I offer up and that it’ll be one piece of messaging in their day that says, “actually you’re not inadequate, there’s something else going on here.”

The first two sections of the book about exercise and eating habits were some of the hardest for me to write because I know those topics can be so extremely personal for people.

PBC: How easy is it for you to detach yourself enough from experiences in order to write about them in such a humorous way?

MT: I’d be lying if I told you that I’m able to emotionally detach from my experiences in order to write about them. My writing is almost entirely fueled by feelings. But, humour can sometimes be a coping mechanism, right? We make jokes to make bad things feel better. For me, finding the absurdity or humour in a situation (and writing about it) is kind of the best way to eventually detach from it.

PBC: In many of the essays, you are speaking directly to the reader. And in others you take on a first-person point of view, writing from the perspective of a scented candle, “the Mountains,” and a yoga teacher. And in others, it is more strictly memoiristic. What made you decide on the format of the essays for your book?

MT: I don’t totally love writing as myself. Probably because I just don’t find me all that interesting. If I’d had things 100% my way the whole book would’ve been written from the perspective of different character voices like you see in the shorter pieces. But my very intelligent editor pointed out early on that people like to read books about other people, and that personal essays written by a person are more relatable than ones written by talking scented candles. Thus, the personal essays at the start of each section were born—to remind you that this book was written by a person and not an anthropomorphized sentient object. Thank goodness for good editors!

PBC: Finally, have you contacted Peloton directly to leave a rave review of Cody Rigsby? I’m hoping they contact you soon to ask permission to use it as a testimonial in their commercials.

MT: Oh my word, the mere idea of being contacted by Cody Rigsby’s representatives is going to make me swoon—like, someone fetch my smelling salts I’m going to topple over at the thought. If Cody knew I existed, much less read the section of the book where I refer to his excellence, I would probably cease to exist. The book is the only way that would ever happen too, because he’s certainly never going to see my name at the top of that bike leaderboard lol.

If I’d had things 100% my way the whole book would’ve been written from the perspective of different character voices like you see in the shorter pieces.

PBC: What authors or other storytellers do you look to for inspiration?

MT: I really appreciate Sloane Crosley’s essay writing, especially after trying to write my own personal essays. I love Rachel Bloom’s musical TV series Crazy Ex-Girlfriend (that show, Cat Cohen’s Netflix special, and the Broadway musical Six have made me wonder if it’s too late for me to become a theatre kid). And I’m constantly delighted by the people writing for Last Week Tonight with John Oliver. I would kiss their big gorgeous brains if they’d let me.

PBC: If you weren’t a writer, what would you be?

MT: Unemployed. Possibly dead. I have zero other skills. I’m going to be helpless in the upcoming apocalypse.

PBC: What is a lesson you learned early on in your career that has stuck with you?

MT: Wednesdays are not for change. If you’re going to shake things up, midweek is just not the time.

PBC: What new projects do you have in the works?

MT: I’ve been threatening to write a romance novel for a while now, so maybe I’ll finally get to that.

When you don’t have time to browse your local bookstore, I highly recommend ordering Do I Feel Better Yet from bookshop.org, where every purchase supports local bookstores. 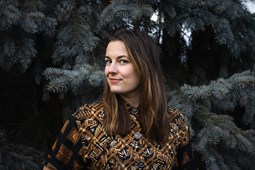 Madeleine Trebenski has written for McSweeney's, the New Yorker, Outside Magazine, and more. Her piece "The Girl from Avril Lavigne's 'Sk8er Boi' Responds 18 Years Later" has gone viral twice and her work has been featured on Elizabeth Banks's "My Body, My Podcast."

ABOUT DO I FEEL BETTER YET? 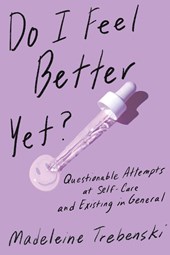 If you've ever dared to express dissatisfaction with the state of your life, you've inevitably received a variety of helpful suggestions: "Have you tried meditation? Exercise? A cult? An exercise cult?" In Do I Feel Better Yet?, Madeleine Trebenski explores more than 45 so-called solutions suggested to her in the name of self-care. In a playful and at times sardonic chronicle of the elusive promises of multistep skin-care routines, gratitude journaling, scented candles, and more, Trebenski perfectly captures what it's like to live in a time when homemade kombucha and weighted blankets are said to single-handedly solve all our problems. These essays will make you laugh, make you feel less alone, and maybe make you feel better—even if just for a little while.

Do I Feel Better Yet?: Questionable Attempts at Self-Care and Existing in General