Striving for comfort in a culture that encourages him to push himself to exhaustion, Goodbye, Again is a place for Jonny Sun and us readers to process the world. 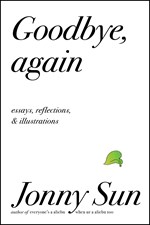 We've been told again and again since March 2020 that we should give ourselves more breaks, to take every day slowly, to figure this new world out one step at a time. And Jonny Sun had been trying to slow down too—since roughly 2018. In the moments he took to relax, he started to document his meandering thoughts. So by focusing on not being so focused on productivity, he ended up writing a book. Jonny Sun is my hero.

Sun has candidly shared his ideas on the human experience in an impressive array of forms: plays, a TED talk, a TV series (BoJack Horseman), tweets, illustrated novels based on Tweets (one being in collaboration with Lin-Manuel Miranda), and now an essay collection.

Goodbye, Again is a meditative book that fellow artists, writers, Type As, and anxiety-inclined minds everywhere will connect with. My boyfriend and I have started reading an essay or two a day together, happy to connect over seemingly banal subjects like sharing popcorn ("That's not romantic! That's just getting in the way of each other's popcorn.") and moving out of a garden-level apartment. (Like Sun, I too, wish it was just called basement-level. It would be less disappointing when you move in and are surprised by the sometimes damp, always dim atmosphere.) We are always pleasantly surprised by the depth our own conversations can go based off only a couple pages of Sun's musings. Even deeper than a garden-level apartment, you could say!

[I]n the last morning that I lived here, after I have moved out the mattress and all the boxes and the phone charger, now that all of my belongings and my unsurities no longer have this place to call their home, it feels like there's nowhere left for dust to hide. [...] There's nothing to hide that the light outside doesn't really reach the back of this north-facing basement-level—sorry Garden-Level—apartment.

Sun really doesn't hide anything in his essays, yet he doesn't overshare either. We learn about the impact depression and anxiety have had on his life and see illustrated scenes from his dreams and nightmares, but we also get bitter-sweet realizations about the importance of family and plenty of reflective moments with his plants. What starts with a small observation is carried through stream-of-consciousness-style sentences that wind for up to five lines at a time until Sun slowly zooms out, exposing the bigger picture, as the essay ends with a clear realization or larger idea or question about life.

Sun seems like a very present person, sharply attentive to how everything around him makes him feel—sometimes nostalgic, sometimes cared for, sometimes alone, and many times all those at once. Striving for comfort in a culture that encourages him to push himself to exhaustion, Goodbye, Again is a place for him and us readers to process the world. In this processing, he finds both beauty and adversity in the everyday.

Beauty in asking for a recipe from your parents or conversing with someone with good text etiquette. And beauty also in the alikeness of Dim Sum restaurants:

where time is of no importance. The fact that you are here, now, is the only important thing. […] And when you emerge back into the real world, it is evening, but it is only 4 P.M., but it is dark now because that is what afternoons are like in Toronto […]

Adversity in playing Tetris, buying a dying plant, and the constant imbalance of conversations:

I realized that I'd been so used to being spoken over, to being cut off, to being conveniently not heard, to not being a major part of the conversation, that maybe a normal amount of talking in a safe and equal conversation made me seem like I was talking way too much.

His ability to contain such big ideas in such compact essays makes every page therapeutically re-readable. Whether you identify with Sun's perspectives or not, Goodbye, Again will make a positive impact on your patience for yourself and others. 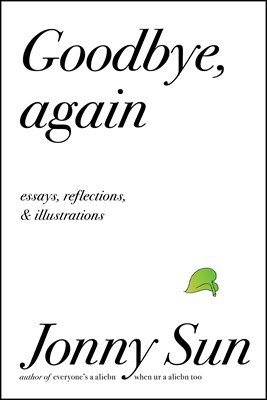