Co-Illusion: Dispatches from the End of Communication by David Levi Strauss, The MIT Press

The publication of business books has gone as quiet as most businesses themselves this week. I’ve seen this lull coming for a while (and there are a bunch of great books coming soon), but I didn’t imagine it would coincide with working from home, balancing work with five and seven year old kids home from school, and trying not to drive my wife insane as we try to make sense of where all this might be going and how it might affect our community. In light of all that, I am grateful to have a wider range of books than usual to explore issues with a broader lens. The first is tied to an event that I thought would have a huge impact on life in our city this summer: the national convention of a political party. David Levi Strauss has been attending the conventions of both parties for over a decade:

The first time I walked onto the floor of the Republican National Convention in Madison Square Garden in August of 2004, I realized that I had walked into a machine for making public words and images.

It is a powerful machine, and can be used to communicate, even to help make meaning. But his dispatches from the 2016 Republican Convention, of which this book is comprised, paint a mostly dark, often depressing take on the corruption of our communications and poisoning and erosion of our public dialogue, and how it is tied to new communications technology.

Over the past twenty years, we have built a communications environment in which the loudest, most intransigent, and ignorant voices dominate public speech because they have a structural, tactical advantage. The person or entity that gets the most hits fastest wins. Speed has a politics.

We all witnessed the rise of this technology, enthralled by what it put at our fingertips, without fully bearing witness to its more destructive effects. That deeper look and examination has been happening more frequently over the past few years, and David Levi Strauss has contributed something of intellectual and artistic value to it with Co-Illusion. (DJJS)

Fresh from Poland: New Vegetarian Cooking from the Old Country by Michał Korkosz, The Experiment

One of the best parts of living in Milwaukee is the summertime, when every weekend brings another festival celebrating everything from LGBT pride and ethnic heritage to worker rights and the abolition of slavery. These gatherings are annual markers for us, events we plan our summer schedules around. And while many this year have already been postponed or cancelled, I am celebrating them all in my heart—and in my kitchen. I’ll admit that Polish Fest has never been high on my list, mostly because my stereotyped view of the food is heavy, bland, and too meat-focused for how I eat these days. But when I look at Michal Korkosz’ new vegetarian cookbook, Fresh from Poland, I realize how wrong I have been! With his Saveur award-winning blog is named Rozkoszny (“delightful” in Polish), this young food writer is on a mission to “show [his] homeland from a different angle,” and with every recipe, he does just that. Enter a world filled with sour cream, kefir, and smoked plums. Popped buckwheat, fermented soups, and rose water-infused desserts. I’m learning so much about Poland while reading this cookbook, including the truly shocking fact that Warsaw is one of the most vegan-friendly cities in the world. Hunkering down at home is a great time to experiment with new cuisines, and I’m anxious to try so many recipes here: Tomato-apple soup with “poured noodles,” Spring millet salad, Buttermilk pan buns, and Blueberry pierogi with honeyed sour cream. As I write this, I’m also attempting a three-hour slow boiled kajmak (a.k.a. Polish dulce de leche) to be used as a topping along with apples and walnuts for some creamy oatmeal tomorrow morning. How rozkosny! (BRM)

The Rocket Years: How Your Twenties Launch the Rest of Your Life by Elizabeth Segran, Harper

The book begins with a look into author Elizabeth Segran's life at thirty-four: married to a man she met in college and now shares a toddler and house with, but the era in between (the rip-roaring time of your twenties) is what Segran calls "a whirlwind" with plenty of risk-taking and mistake-making, all of which made her into the person she is today. Of course, any sort of guidance is preferred, even in the most spontaneously-directed of times. I'm only twenty-four, and Google has been my go-to for researching everything from the best brunch restaurants near me to actual research for essays and papers in college. However, what Google can't tell me is what I want to do with my life. That's where The Rocket Years helps shed a little light.

Take advantage of Segran's two years of research in this empowering and informative little book! The Rocket Years has insight that anyone can use, whether you're looking for help plotting out how to use your twenties to achieve long-term goals, or if you're interested in how decisions earlier in your life may impact you in your thirties and beyond. "The idea is that our initial decisions, as random as they are, often have a profound impact on our final outcomes." And a related fun-fact that Segran shares: "The first typewriters had keys that were arranged alphabetically, but in 1873, a newspaper editor from Wisconsin found that he kept jamming frequently used letters. One day, he invented the QWERTY configuration to space out the most commonly used keys, hoping to slow down his typing and make his typewriter work better." As a life-long Wisconsinite and almost life-long typer (in my class, we learned how to type at around 7 years old), this fascinated me, but even more so, it helped me reconsider the commonplace and see how something that was a smart solution in the past has become unnecessary (and probably aggravates anyone who's a hunt-and-peck typist). It also highlights the unchanging uncertainty of the future, which is scary and intimidating and the equivalent of a dark shadow of either good or bad things looming somewhere between very close and very far away. But at the same time, Segran reminds readers that this uncertainty should empower us to take control of what we can–in everything from our career, hobbies, fitness, marriage, family, friendship, politics, and faith–and let go of everything that may hold us back. (GMC)

The Third Harmony: Nonviolence and the New Story of Human Nature by Michael N. Nagler, Berrett-Koehler

The physical distance we are putting between ourselves right now is making us all aware of how connected we really are. Conversely, as Michael Nagler explores in his new book on nonviolence, it is the assumption that the universe is primarily made of matter, and that we are primarily physical creatures, that has led us to the modern scourge of materialism and separateness. That, he believes, is an old story, one that assumes existence is random, that “scarcity, competition, and violence are inevitable”—a part of nature and of human nature. He believes there is a new story, one that is more in line with what we know about human evolution and scientific discovery, in which nonviolence is more than just a political tactic, but a power and creative energy we can all access, a living force and a fundamental principle of life. It is a new story we can all help make a reality:

This will require a shift, from what Martin Luther King called our thing-oriented civilization to a person-oriented civilization; from a view of the universe as consisting of matter, with everything separate from everything else and no overall guiding purpose, to one of the universe grounded in consciousness, such that everything is interconnected and human life in particular definitely does have meaning and purpose …

It is unlikely that we will come out of this pandemic as exactly the same people and society we were before it. We will be changed, and that could be a beautiful thing. Mahatma Gandhi, Dr. Martin Luther King, Jr., Cesar Chavez, and Wangari Maathai have all shown us another way is possible. It is not fear keeping us apart right now, but courage that we can overcome and solidarity with others, and we can keep that going when we’re able to get back together. “Right now,” Nagler writes, “the key change will be the change of the story itself.” Nonviolence is at the heart of that new story. (DJJS)

“Even in the most constrained surroundings,” writes Frank Matela, “we still have the seed of freedom within our power: the freedom to choose how we interpret the situation and how we react.” That is apt for the times we are in. There is a terrible disease making its way across the globe. But, before that, there was a dis-ease common in our modern life and worldview. I think Martela comes a little too close to home when he writes:

In the idealistic modern worldview, you are free to source your own sense of meaning. And blaze your own unique path, based on your self-selected values. Unfortunately instead of feeling liberated, you just feel empty. You work harder, smarter, and more effectively than previous generations, but you’re increasingly at a loss in explaining why you push so hard.

His examination of what constitutes a wonderful life and meaningful existence might be just the balm we need not only for the next month or so, but for the rest of our lives. “Rather than contemplating the meaning of life,” he writes, “focus on the meaning in life.” That seems doable. (DJJS) 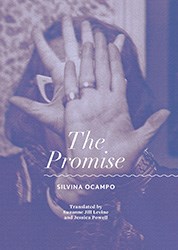 “The Promise by Silvina Ocampo. The manuscript for this book was found after Ocampo's death, however, it's not known whether she had considered it finished or if it was still a work in progress. There is a story, but Ocampo's narrative architecture is very unconventional. The book feels almost journal-like, with the narrator putting down memories of the people around her. Throughout the repetition of character attributes and seemingly unimportant events, an image arises of the narrator's world. She glues this narrative together with reflections on existence, and her own thoughts and feelings. I can't describe exactly what it is about this book that I love, but it is charming...a memorable read." —Michael Jantz, Custom Projects Director