The 2022 Marketing & Communications/Sales & Influence book of the year is How Minds Change: The Surprising Science of Belief, Opinion, and Persuasion by David McRaney, published by Portfolio.

It can feel as if we are living in completely different realities than those we disagree with, and to a certain extent, we are. We literally see things differently, and our perceptions shape our understanding of reality. In How Minds Change, David McRaney does not get bogged down in the underlying nature of reality itself, eschewing that rabbit hole for how our perceptions of it are formed and how they change. His primary goal is to understand if, and more importantly how, we can change minds through conversation and persuasion. And for that, he turns to the latest neuroscience to dissect phenomena like the online arguments about The Dress (and what color it was) and the deep canvassing work done by the LAB (Learn Act Build) in California.

The key, McRaney finds, is to ask questions and listen, to get away from ideology and abstraction and into their real, lived experiences. Where facts and information may falter, appealing to how people feel and understanding how they came to believe what they do, may open them up to a change of heart.

The following excerpt comes from the book's Introduction. 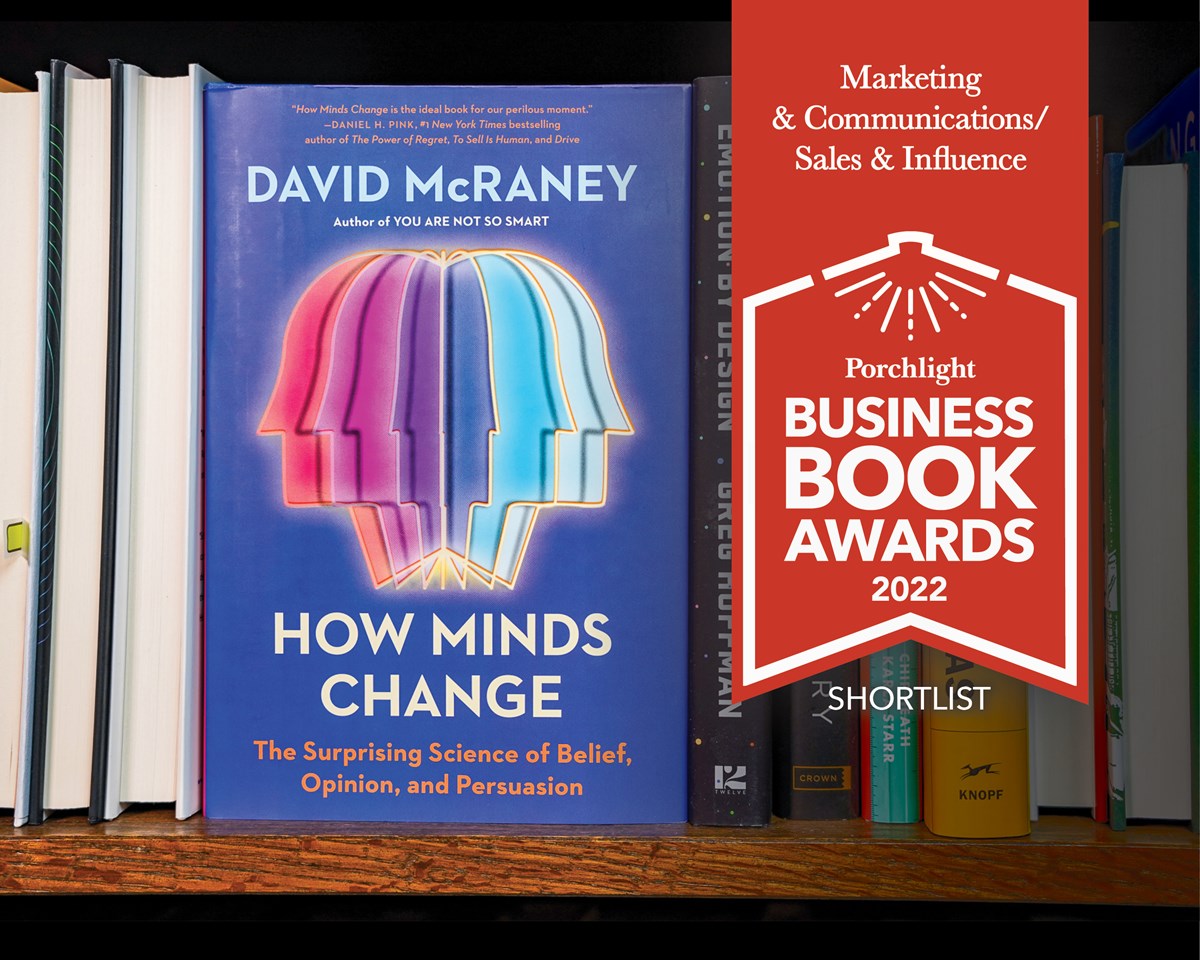 This is a book about how minds change—and how to change them—not over hundreds of years, but in less than a generation, in less than a decade, or sometimes in a single conversation. In the pages that follow, we will learn what we are doing wrong when we fail to change minds, by exploring the surprising psychology behind how people modify and update their beliefs, attitudes, and values; and how to apply that knowledge to whatever you believe needs changing, whether it’s within one mind or a million.

We will meet experts who study this sort of thing, and spend time with people who changed their minds, whether in powerful moments of epiphany or on long walks toward surprising insights. In the final chapters, we will see how these ideas combine to create social change and, in the right circumstances, sweep across entire nations in less than a generation. We will see that the speed of change is inversely proportional to strength of our certainty, and certainty is a feeling: somewhere between an emotion and a mood, more akin to hunger than to logic. Persuasion, no matter the source, is a force that affects that feeling.

When we wade into the techniques, you might feel some misgivings about the ethics of it all. Even if we feel like our intentions are good or that the facts are on our side, persuasion can seem like a form of manipulation. But it may put you at ease to learn that by its scientific definition, persuasion is the act of changing a mind without coercion. As Daniel O’Keefe, a professor of communication, defines it, persuasion is “a successful intentional effort at influencing another’s mental state through communication in a circumstance in which the persuadee has some measure of freedom.”

More specifically, as psychologist Richard N. Perloff explained years ago in his book The Dynamics of Persuasion, we can avoid coercion by sticking to symbolic communication in the form of messages meant to alter another person’s attitudes, beliefs, or both, via the “voluntary acceptance” of those messages. According to Perloff, you can differentiate coercion from persuasion when “dire consequences” are employed to encourage someone to act the “as the coercer wants them to act, and presumably contrary to their preferences.” He adds that when people believe they are free to reject the communicator, that’s when ethical persuasion is at play. It’s only “when individuals perceive that they have no choice but to comply, the influence attempt is better viewed as coercive.”

Persuasion is not coercion, and it is also not an attempt to defeat your intellectual opponent with facts or moral superiority, nor is it a debate with a winner or a loser. Persuasion is leading a person along in stages, helping them to better understand their own thinking and how it could align with the message at hand. You can’t persuade another person to change their mind if that person doesn’t want to do so, and as you will see, the techniques that work best focus on a person’s motivations more than their conclusions.

We will learn that, in many ways, persuasion is mostly encouraging people to realize change is possible. All persuasion is self-persuasion. People change or refuse based on their own desires, motivations, and internal counterarguing, and by focusing on these factors, an argument becomes more likely to change minds. As psychologist Joel Whalen once put it, “You can’t move a string by pushing it, you have to pull it.”

This is why it is so important to share your intentions up front. Not only does that keep you on solid ethical ground, but it also increases your chances of success. If you don’t, people will assume your intentions. Whatever they assume will become your “actual” position in their minds, and you run the risk of not having the conversation you intended. If they believe that your position is that they are gullible or stupid or deluded or in the wrong group or a bad person, then of course they will resist, and the facts will now be irrelevant.

Early in the research, I applied some of this with my father in anargument over a conspiracy theory that had made its way into his politics. We were debating the facts—for a long time. Exhausted, I took a breath and asked myself what I actually wanted. Why did I want to change my father’s mind?

I said, “I love you, and I’m just worried that you are being misled.” The debate ended instantly. We then entered a conversation about who we can trust on the internet. He softened, and admitted he was open to changing his mind about the facts, just wary of where they came from.

When I asked myself why I wanted him to change his mind, my answer was, “I don’t trust his sources, and don’t want him to trust those sources either.” Why? “Because I trust other sources who disagree, and I wish he did too.” Why? “I want us to be on the same side.”Why? You can keep asking until you are contemplating quarks and gluons, but it’s crucial you at least share your intentions for challenging someone’s ideas, or else both of your positions will be: “I am right, and I think you are wrong.”

I hope you will carry that question—Why do I want to change their mind?—in your mental backpack as you travel with me chapter by chapter. And I hope that question will blossom, as it did for me, into a series of questions. You are reading these words because we each have the power to give up old beliefs, to replace old ignorance with new wisdom, to shift our attitudes in light of new evidence, and to free ourselves from outdated dogma, harmful traditions, and the diminishing returns of defunct politics and practices. The ability to realize we are wrong is baked right into the gooey mess of neurons wobbling around in every human head. But when and what and who should we be trying to change?

What counts as dangerous ignorance or outdated dogma? What qualifies as a malignant tradition, defunct politics, or a misguided practice? What norms are so harmful, what beliefs are so incorrect that, once we know how to change minds, we should take every opportunity to do so? And here’s the kicker: How do we know when we are right and they are wrong?

But also, what does the phrase “change your mind” even mean?

We will answer all of these going forward, but I didn’t start this journey with these questions in mind. They came later, after a good deal of my own ignorance revealed itself. That’s why I think we must ask ourselves these questions here, before we begin, and bring them along to the lessons and conversations ahead.

The ability to change our minds, update our priors, and entertain other points of view is one of our greatest strengths, an evolved ability that comes free with every copy of the human brain. You soon will see why, to leverage that strength, we must avoid debate and start having conversations. Debates have winners and losers, and no one wants to be a loser. But if both sides feel safe to explore their reasoning, to think about their own thinking, to explore their motivations, we can each avoid the dead-end goal of winning an argument.

Instead, we can pursue the shared goal of learning the truth.

Excerpted from How Minds Change: The Surprising Science of Belief, Opinion, and Persuasion.
Copyright © 2022 by David McRaney.
Published by Portfolio, an imprint of Penguin Random House LLC.
All rights reserved.

David McRaney is an author, journalist, lecturer, and the creator of the blog You Are Not So Smart, which became an internationally bestselling book, later followed by You Are Now Less Dumb. David currently hosts the popular You Are Not So Smart podcast and speaks internationally about irrational thinking and delusion. Before finding internet fame, David graduated with a degree in journalism from the University of Southern Mississippi and cut his teeth covering Hurricane Katrina on the Gulf Coast and in the Pine Belt region of the Deep South. He has been a beat reporter, editor, photographer, voice-over artist, television host, digital content manager, and everything in between. 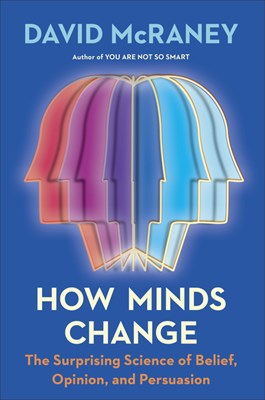