Change the Game or Go Home: A Manifesto for Innovation

"How is it that the likes of MapMyFitness or Mint end up being purchased by the likes of Under Armor or Intuit for hundreds of millions of dollars instead of being created by these same companies? Isn't it time companies asked the same questions as these entrepreneurs, but instead of articulating this in a creative brief and being satisfied with a jingle, tagline or even real-time tweet as the output, fast tracked and super sized this expectation in the form of a disruptive technology-led solution? Isn't it time to look towards the tens of thousands of viable startups out there for collaboration opportunities? And if the solution doesn't already exist, why wouldn't you start it yourselves?" 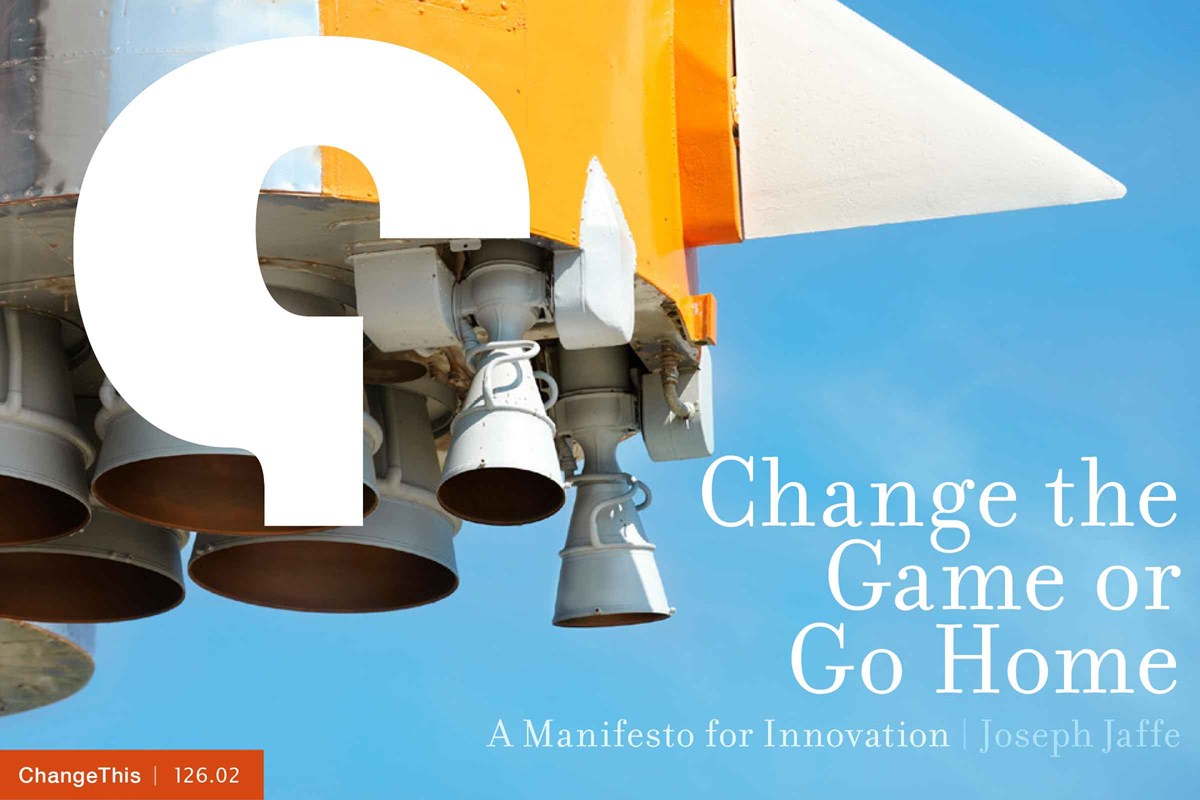 it’s probably a good idea to do some level setting, and the best place to begin is with the word “innovation” itself and a simple definition of what innovation is and what it is not.

Depending on which dictionary definition you turn to, you’ll get slightly different definitions that essentially talk about “doing things differently” to “get a different result.” If insanity, as Einstein defined it, is doing the same thing over and over again and expecting a different
result, isn’t innovation then the antidote to insanity? 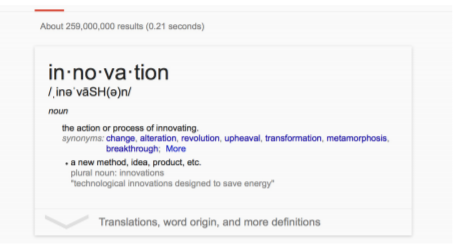 Innovation is not a new term in the organization. It is typically associated with product R&D—specifically new product or packaging development. It also has a bit of a stigma as it relates to being an overused cliché of sorts (as the Ngram viewer below suggests). 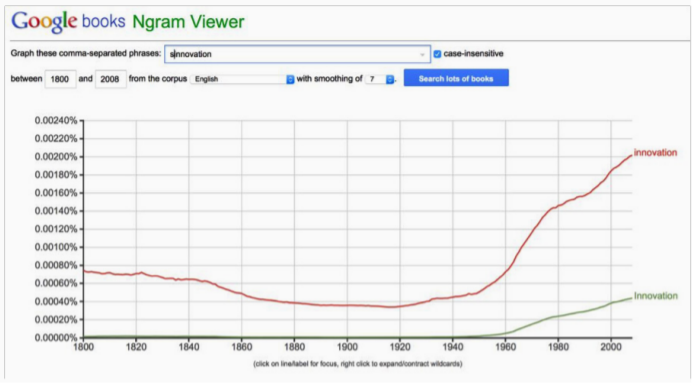 If innovation is on the rise, it is with good cause, especially as it relates to the evolution of marketing. Marketing itself is tired, staid, and in a holding pattern of stagnation. The talent of tomorrow is still learning from textbooks of the past that cite A.I.D.A. (the traditional funnel
of Awareness-Interest-Desire-Action), S.T.P. (Segmentation-Targeting-Positioning) and the 4 P’s (Product-Price-Place-Promotion).

As a case in point, A.I.D.A. was created by a traveling insurance salesman by the name of E. St. Elmo Lewis in 1879. The S.T.P. approach is still attached to an industrial revolution “we sell what we make” mindset, and the 4 P’s are completely commoditized (see: Telco, Airlines,
Banks, and so on)

Change the Game or Go Home

Marketing needs to change. And fast.

Marketing is falling further and further behind the very consumers it courts, qualifies, and serves.

Our consumers swim in a mobile world and yet we doggedly hold onto the old guard, led by the 30-second television spot; profusely defending it’s honor, resilience, and longevity.

If insanity, as Einstein defined it, is doing the same thing over and over again and expecting a different result, isn’t innovation then the antidote to insanity? “

It’s an irrelevant argument at the end of the day.

In a perfect world marketing would lead consumers, challenging and inspiring them in the process like the late Steve Jobs did, or as Henry Ford did when he refused to give into his focus group consensus of producing a “faster horse”.

In a perfect world, marketing would become the connective tissue that extends an olive branch and invites consumers to partner, collaborate, and pay it forward.

But the world is not perfect, so it is important to crawl in order to walk and ultimately run.

A systematic and/or iterative process is imperative in order to resist our all-too-common urge to dive in head first, get burnt, and retreat into our shells—and, in doing so, lose any benefits of first mover advantage.

We covet the bright and shiny object; the Next Big Thing; a solution to a non-existent problem; a tactic in search of a strategy.

I call this the Marketer Hype Cycle (hat tip: Gartner)

Why are we worried about the next big thing when:

1. The next big thing is now (think: the regenerative powers of Twitter as a customer service tool)

2. You haven’t even taken care of digital, social, and/or mobile (just look at how media spend lags media consumption)

Instead of looking at innovation as a tactic, campaign-like widget or tangible output, it’s best to think of it as a cultural commitment; an investment into the future; an organizational and evolutionary outcome.

With homage to The Coca-Cola Company and their process, the innovation journey looks something like this:

NOW: Get in the game, plug the gaps. 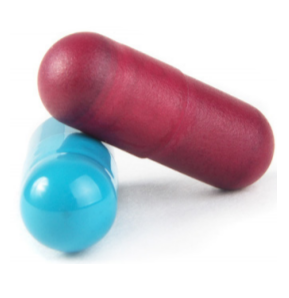 “You take the blue pill, the story ends. You wake up in your bed and believe whatever you want to believe. You take the red pill, you stay in wonderland, and I show you how deep the rabbit hole goes.” —MORPHEUS, TO NEO

Debbie Downer Alert: There are no new ideas. Everything that will be created is just an incremental derivation or tweak of something that came before it. In the startup world, any “revolutionary” or “game changing” idea being developed in the utmost secrecy or stealth is most likely
being developed simultaneously by scores of other dreamers surrounded by their own unique
reality distortion fields (AKA, entrepreneurs).

Does the world really need (or have place for) another photo sharing app?

GroupOn started as a fundraising platform.

Walt Disney said, “if you can dream it you can do it.”

Google’s Head of Innovation, Alberto Savoia believes even great ideas that executed flawlessly can fail. What is required is TIMING and LUCK

Marc Andressen believes that EVERY single doomed and failed dot com from the era of the bubble would succeed if they were started today.

You should believe Marc, Walt, and Alberto.

You just have to know where to look and what questions to ask.

Uber, Airbnb, ZipCar, Netflix, CraigsList, GoPro, and Instagram are all companies that could have, or should have been developed by Ford, Saber, Hertz (actually Zipcar was purchased by Avis for $500 million), Blockbuster, the Yellow Pages, Kodak, and Kodak again.

In all cases, each company was started by one two individuals who saw the world as it could be… and asked why not?

Instead of looking at innovation as a tactic, campaignlike widget or tangible output, it’s best to think of it as a cultural commitment; an investment into the future; an organizational and evolutionary outcome. “

In all cases, these founders have created companies at corporate warp speed that have generated more value than their 100-year old incumbent counterparts.

Apparently startup nation didn’t get the memo about “no new ideas.”

In fact, there are 543,000 new businesses that get started each month in the United States. Most fail, but then there are those entrepreneurs who succeed wildly, and in doing so are out-innovating and maneuvering giant global corporations with tens of thousands of employees and multiple consultancies and agencies on retainer. How is it that the likes of MapMyFitness or Mint end up being purchased by the likes of Under Armor or Intuit for hundreds of millions of dollars instead of being created by these same companies?

Isn’t it time companies asked the same questions as these entrepreneurs, but instead of articulating this in a creative brief and being satisfied with a jingle, tagline or even real-time tweet as the output, fast-tracked and supersized this expectation in the form of a disruptive
technology-led solution?

There are no new ideas. Everything that will be created is just an incremental derivation or tweak of something that came before it. “

Isn’t it time to look towards the tens of thousands of viable startups out there for collaboration opportunities?

And if the solution doesn’t already exist, why wouldn’t you start it yourselves?

This manifesto for innovation is built on top of 3 key belief pillars:

1. Maximizing the full potential and impact of technology across the innovation continuum (digital, social, mobile and emerging) can produce substantial efficiencies.

3. Organizations will need to become more entrepreneurial and agile in order to adapt, evolve, and ultimately survive.

Take a look at your company’s mission statement (the one etched in a gold plaque in your boardroom). Ask yourselves why you act in direct contradiction to the way you think:

1. CUSTOMER CENTRIC: When it comes to your consumers embracing and adopting emerging technologies, why does media spend continuously lag media consumption?

2. MARKETING LEADERSHIP: Why do you settle for second best when it comes to pioneering new approaches, techniques, or solutions? Why are you intent on following?

3. EXPLORATION: Can you live with the opportunity cost of doing nothing in the months, quarters, or year to follow? What is stopping you from “just doing it” and making a commitment to change?

Isn’t it time companies asked the same questions as these entrepreneurs … And if the solution doesn’t already exist, why wouldn’t you start it yourselves? “

So what can you do about it?

1. Create new budgets (Now, New, Next; 70/20/10 or 60/30/10) to fund exploration in innovation—whether in the form of pilot programs, tests, or experiments, or the ability to seek out outlier ideas that help amplify existing efforts. Getting to 10% is your goal, but in keeping with the spirit of crawling to walk to run, plot out a plan that begins with 0.1%, progresses to 1%, and ultimately 10%.

2. Adopt what Google calls 10x thinking (whatever your goals or aspirations, put a zero on to the target in order to truly stretch and challenge yourself) as an antidote to what Eric Schmidt calls “The tyranny of incrementalism.” This applies neatly to the aforementioned
budget trajectory, but it is equally applicable to another scarce resource: time.

3. Consider internal programs and structures to create intrapreneurs within the company. Your employees know your business forwards and backwards. Allow them to rise from the mire and monotony of their day to day in order to grow the business from the inside out.

4. Think like a startup. Act like a startup. Move quicker. Fail faster. Optimize on the fly by pivoting. Rinse and repeat. Test. Learn. Evolve. Done is better than perfect. These are not taglines or clichés. They are a new way to work.

6. Create a fund to invest in startups ventures, entrepreneurs, or acceleration initiatives (strategic partnerships directly with startups or through a best in class accelerator or incubator). This applies equally to the ideas of your own employees.

7. Go outside the safety net to solicit and elicit ideas from your customers, entrepreneurs, freelancers, boutiques, and even competitors.

8. Ask “What if?” and explore the “inefficiency” scenario. Take your marketing and brand challenges, but instead of addressing them through messaging, consider the technology route.

9. Embrace your heresy. What if paid media went away tomorrow? What if McDonalds charged a tax on overweight customers? What if Barnes & Noble only allowed members into their stores? What if Tommy Hilfiger created cheap knock offs for young “entry level” customers? What if Gillette created a $1 per blade subscription service to cannibalize their mainstay business? Oh wait…

10.Put yourself out of business. Industry luminary, thought leader, and visionary Rishad Tobaccowala says that his job is to put his employer out of business!

“Defending the past is far riskier than creating the future.” —PETER DRUCKER

There are 3 types of people (and brands): Those who make things happen; those who watch things happening; and those who turn around and say, “what happened?”

Which one are you?