In their new book, Bob Chapman and Raj Sisodia help us tap into "the extraordinary power of caring for your people like family." The great Israeli short story writer Edger Keret told The New York Times Book Review earlier this year that he tends “to avoid autobiographies and memoirs, since I tend to mistrust people who are telling a story they have such a great stake in.” And I tend to feel the same way about books written by business leaders touting their own approach to, or accomplishments in, business. But sometimes, the case is so convincing that I am taken in. As Edger Keret followed up, “As someone who has just released a memoir I must add that unlike others, I’m totally trustworthy when it comes to telling my life story.”

It may be that I found Bob Chapman’s story in Everybody Matters to be so totally trustworthy because it begins so close to home, and so close to my life story. The book opens with the story of PCMC, a paper mill in a city famous for them—Green Bay*, just two hours up the road from us.

(*Correction: In the words of a PCMC employee, "Paper Converting Machine Company (PCMC) is NOT a paper mill in Green Bay, WI. PCMC is an OEM of converting, printing and packaging equipment for the paper, flexible packaging and non-woven industries all over the world." I apologize for the rather lazy and erroneous description on my part You can learn more about exactly what PCMC does on their website.)

It is more specifically the story of folks like Ken Coppens who work there, that had been repeatedly demoralized by decades of unpredictable layoffs and an us-versus-them, management and union culture, a culture in which people like Coppens felt trapped and torn between friends. It’s a story that points at a fundamental problem in its (previous) business model, and in the predominant business model in all industrial manufacturing. It’s a story I recognize well from the communities I grew up in, between Rockford, Illinois, and semi-rural, semi-industrial Southeastern Wisconsin, where unless you were in business for yourself, you generally had two options: the farm or the factory. (In fact, my mother was a secretary at a farmer's co-op when I was growing up—she now runs the place—and my father, now retired, was a computer programmer in a factory.) And it’s a story that begins to explain why the factories around these parts have been steadily emptying of people as I’ve grown older.

There was a fatal flaw at the heart of the capitalist enterprises that once enabled these communities to flourish: From the beginning, employees were treated as functions or human resources, as interchangeable as the parts they labored to produce. Concessions on safety and more humane working conditions were granted grudgingly and only after protracted battles between uncaring management and militant unions. Lacking heart and passion and soul, such enterprises eventually became easy prey to ever more hard-nosed competitors operating with lower costs and willing to cut every possible corner.

Bob Chapman’s coauthor is Raj Sisodia, a FW Olin Distinguished Professor of Global Business and Whole Foods Market Research Scholar in Conscious Capitalism at Babson College. He co-authored a book with Whole Foods co-CEO John P. Mackey entitled Conscious Capitalism last year. And while it can be argued that Mackey’s history in this regard has some pockmarks on it, the conscious capitalist movement is a noble one seeking a higher customer-centric and product-related purpose. Bob Chapman, with a firm nod to that movement, has turned its paradigm around at Barry-Wehmiller, declaring that “People Are Our Purpose.”

At Barry-Wehmiller, our primary purpose is clear to us: We’re in business so that all our team members can have meaningful and fulfilling lives.

As we all know, the work we do is a primary factor in how fulfilled we are as a whole, and so Barry-Wehmiller sets out to not only to improve its business, but makes its business to the improve the lives of those who work there—from the top to the bottom of the organization. Most companies want to boost employee engagement because it will boost productivity and lead to better numbers. But it all starts by focusing on the numbers. Chapman does so because he cares about his employees and knows that improving the workplace can improve their lives. He trusts that making them more fulfilled overall will lead to more engagement and better results, but it all starts for him by focusing on the people. And, moreover:

It is an approach that has been tested, refined, and proven to work dozens of times in half a dozen very different countries and in numerous towns and cities across the United States.

I thought the story of PCMC was a familiar one at first, that it was just another Midwestern factory about to be shuttered, another harbinger of the end of the industrial economy. But PCMC was taken over by Barry-Wehmiller, and has not only turned around financially, they are turning the globalization paradigm around by bringing jobs back to Green Bay from abroad. The book starts off with a family business being taken over by a conglomerate, in my backyard… or I suppose my north woods. That is not usually the beginning of a what I would consider a feel-good story. But in this case, the family business was incorporating the worst management practices, and the conglomerate was treating its people like family, trusting that:

Everyone wants to contribute. Trust them. Leaders are everywhere. Find them. Some people are on a mission. Celebrate them. Others wish things were different. Listen to them. Everybody matters. Show them. We don’t just need a new guide to leading in times of change or adversity. We need a complete rethink, a revolution.

You’ll read a lot of words in Everybody Matters you don’t usually come across in business books: “unconditional love, forgiveness, nurturing.” These are words you’re used to hearing around the dinner table, not the conference room table. But Chapman knows it’s a better approach…

How do I know? Because I started out as one of those leaders who put profits before people, who always thought about cost, never about caring. Eventually I learned it is all about leadership—but not the kind of leadership I had learned in business school. And that has proven to be more rewarding than any numbers could ever be.

But showing your people they matter means more than spouting pleasantries and paying lip service. It means getting their input and getting them involved. The people “out on the floor” in your business likely have ideas, and if you can get that input and get them engaged, you have something far more valuable than an efficient machine to lower operating costs, you may have an effective idea to grow your business. So when Ken Coppens asked his manager at PCMC when the bus from St. Louis would arrive with a team fresh from Barry-Wehmiller people to fix them, he was told “there is no bus. People like you and me, we have to fix this.” This gave him not only the impetus, but the agency he needed to put his ideas forward and try some of the things he thought would work, but was never allowed to implement under old management.

That old management, and that old management mindset, was killing not only the energy and self-determination of its employees, it was killing a company by doing so. And that mindset wasn't only killing one company in Green Bay, it has been devastating a region—perhaps a country. If you are interested in helping change that mindset and change course, or if you already are and would like some more ideas to implement to further that work, pick up a copy of Everybody Matters. 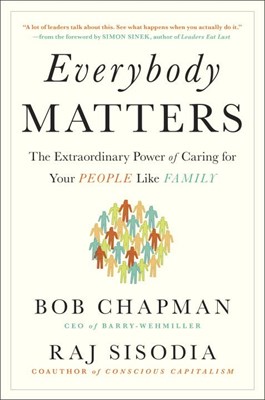