The Importance of Propaganda Education

The study of propaganda provides plentiful opportunities to address values, ethics, and morality. As people activate critical thinking skills in recognizing and responding to propaganda, they increase autonomy and personal freedom. 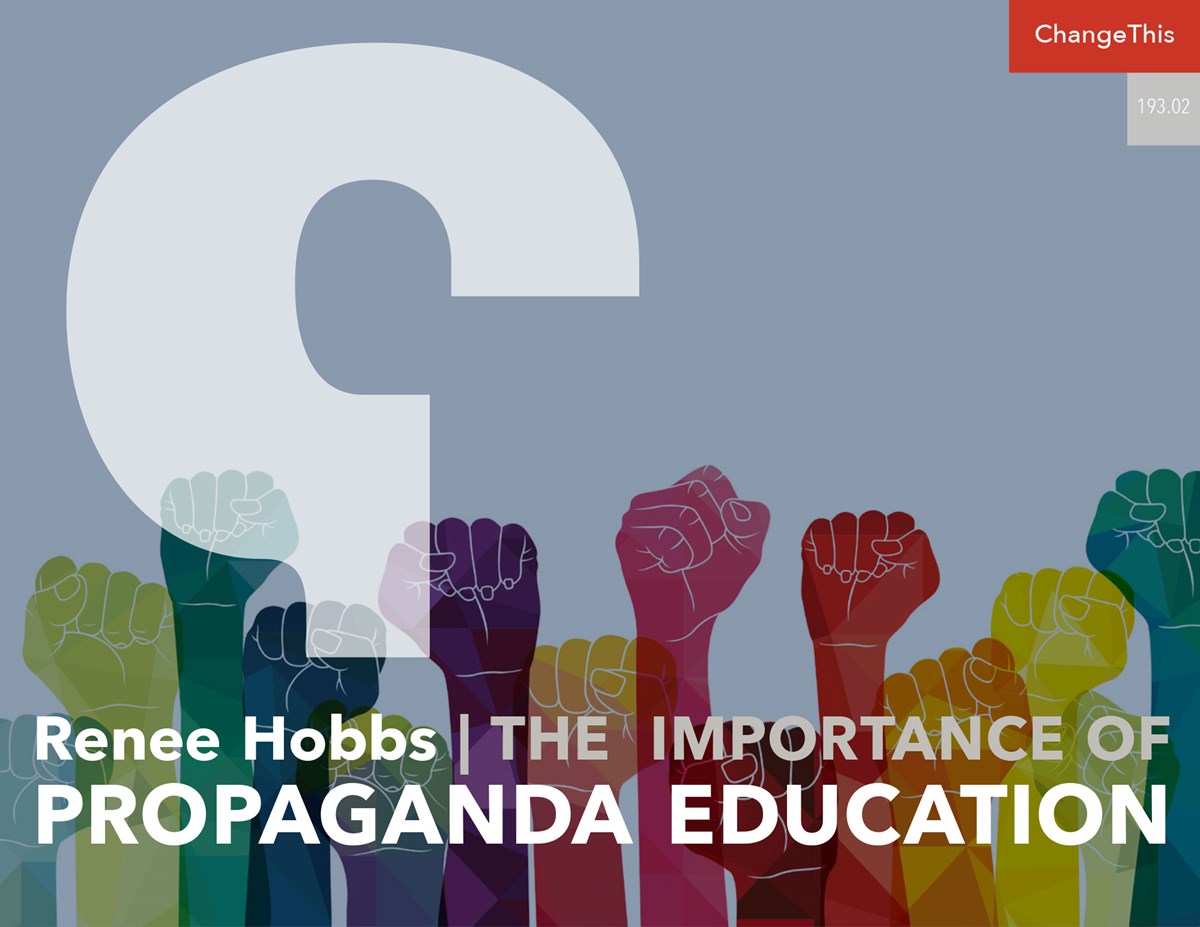 Propaganda is a word with a bad reputation.

Perhaps you think that the word has been thrown around indiscriminately in the past few years. You may be inclined to think that propaganda is something associated with totalitarian regimes from the past. Or perhaps you think of propaganda as governmentsponsored spreading of lies and misinformation. Perhaps you think of propaganda as an unethical effort to distort people’s sense of social reality through the endless display of ever-changing tweets and memes in a world where Instagram, Facebook, Twitter, and Google seem to rule. You have certainly encountered many purposefully manufactured stories from politicians, governments, businesses, activists, and special interest groups who aim to sway public opinion, quash critics, or sow discord. For many people, propaganda is a term of abuse to hurl at rivals and opponents. If you really dislike a particular news story, social media post, or YouTube video, if it outrages or offends you, or if you think it’s harmful, dangerous, irresponsible, or just flat-out wrong, just call it propaganda.

But propaganda is so much more interesting and complicated than all that.

Propaganda contributes its share to the infodemic, a term the World Health Organization has used during the coronavirus pandemic to describe the avalanche of information that people must sift through to make decisions about their health and safety. Propaganda can be found in entertainment, education, and the management of public opinion, where ideas about moral character and ethical values become embedded into the fabric of culture. Propaganda has helped to shape your sense of personal identity through religious, commercial, or entertainment narratives that depict what it means to lead a good life. Depending on your point of view, the good life may include caring for your family, travelling the world, honoring people with disabilities, or even appreciating the timeless beauty of expensive watches.

In schools, many educators keep discussions of propaganda comfortably in the past, exploring it only when studying World War II Germany. As one critic put it, “Propaganda is something most of us read about in history class and wondered how people were so easily duped.”[1] And although teaching and learning about historic propaganda is important, propaganda is still a part of everyday life.

Today, many people are engaged in the production of compelling propaganda.

There’s never been a more important time to learn about contemporary propaganda. New digital forms of propaganda are influencing both the public and policy makers, as bots amplify certain ideas to create an illusion of popularity and trolls attack people with the goal of silencing or marginalizing ideas they hate. Propaganda is big business, disseminated through personalization algorithms and machine learning. Digital platforms make it easier than ever to use techniques like sentiment analysis, where natural language processing, text analysis, and computational linguistics help propagandists identify, evaluate, and respond to people’s expression of emotion in ordinary online interactions. [2]

Today, many people are engaged in the production of compelling propaganda. Political leaders around the world make use of it to influence public opinion. Conspiracy theories and lies have been used to demean leaders of foreign countries, government agencies, and political foes alike. Sometimes, propagandists use anger or outrage to grab attention. Other times, they repeat simple slogans over and over until they become mindless but memorable clichés. Others use more sophisticated techniques. Disinformation specialists are adept at online manipulation campaigns that trick journalists into reporting false information. Some propagandists even create think tanks and build up their authority by producing research that supports their preferred position. This kind of propaganda may influence policy makers, who end up with a distorted perception of issues that are important to the public.

Propaganda thrives on conflict. Mass media and social media can cultivate us-versusthem narratives that dehumanize the other and increase people’s willingness to participate in conflict. Sadly, many people have embraced hate speech as part of political discourse. We have become desensitized to it and even experience outrage as a form of entertainment. You may barely recall the shock of reading about Donald Trump’s insistence that President Barack Obama was not a U.S. citizen. Today, you may shrug when he labels immigrants as criminals and tells Americans that their elected political leaders and military generals are “morons” and “babies.” Propaganda has contributed high-octane gas to accelerate the growing political polarization we are seeing all around the world. Some days, it can be exhilarating; other days, it can feel tragic. As Los Angeles Times TV critic Lorraine Ali pointed out, “It’s the mark of a country we never wanted to be: a nation that divides its own people and pits them against one another.”[1]

Propaganda has contributed high-octane gas to accelerate the growing political polarization we are seeing all around the world. Some days, it can be exhilarating; other days, it can feel tragic.

Throughout history, propagandists have chosen whether to unify or divide people, depending on their strategic goals. Demagogues simplify complex realities by making wild promises, using the power of emotion to activate people’s feelings of trust and loyalty. Anyone who opposes the demagogue is labeled an enemy, which then incites a spirited us-versus-them energy that can be difficult to unravel. This kind of leadership can be appealing to many, but it is anathema to democracy. Scapegoating is used to focus blame. By insulting and trying to damage the reputation of anyone who dares to challenge them, demagogues aim to silence or marginalize opponents. The ancient Greeks warned us that demagogues intentionally widen social cleavages, “playing one group of citizens against another.”[3] The result can become a tyrannical abuse of power.

On key public issues like poverty, health care, education, immigration, the federal debt, foreign policy, and more, propaganda plus demagoguery spells trouble. As Raymond explains, “Political divisions become almost impossible to bridge, which dissuades elected officials with differing viewpoints from deliberating together.”[3] Without consensus, the democratic process does not work. Sadly, as we are seeing now in the public sphere, it’s far easier to divide than to unite.

Given the complex political context of today, how can propaganda be productively studied in the elementary school, the high school or the college classroom? Ironically, the first step involves appreciating propaganda instead of demonizing it. Propaganda, as a powerful form of expression and communication, must not be positioned as the fall guy for all the world’s woes. Propaganda is a vital part of the democratic process, providing opportunities for exposure to diverse ideas and inducing people to act together. Activists create propaganda when they stage a protest march, a rally, or any other public event filled with songs, chants, and inspiring speeches. Public health officials create propaganda when they develop targeted ad campaigns to help people make informed decisions about their health. Documentary filmmakers create propaganda when they explain why urgent attention is needed to address the climate emergency resulting from the 40 billion tons of carbon dioxide humans pump into the atmosphere each year. You may contribute to propaganda’s viral nature when you like or share a social media post about police brutality and racism or even when you share a compelling political campaign ad.

When propaganda appeals to genuinely democratic values, it can increase people’s awareness of the dangers of authoritarian and fascist ideologies. In fact, there is a long history of public conversation regarding “how a society aspiring to democracy may balance the right to persuade with the right of the public to free choice.”[4] Because it simplifies information and ideas, propagandists can help people experience moral clarity about issues and events that most concern them. Propaganda that speaks to people’s deepest values bypasses the head and goes straight for the heart. It breaks through the clutter of everyday life.

Teaching and learning about propaganda can be a transformative experience for both students and teachers alike. When done well, the study of propaganda can embody fundamental practices of literacy and civic education in the context of inquiry learning. Propaganda education can activate intellectual curiosity. It can promote multiperspectival thinking and help people more accurately read the digital environments we inhabit, helping us make better decisions. It can be a means to resist demagoguery and even help to cure the disease of political polarization.

But there’s no magic wand, no defensive armor, vaccine, or potion that can inoculate people against the pernicious influence of propaganda. Education alone cannot solve the epistemological crisis of the present time, when social media amplifies false, dangerous, and repugnant ideas, and political leaders lie with impunity. Education alone cannot erase the fear that leads people to become vulnerable to false but emotionally resonant messages. Education alone cannot eliminate the damage caused by inequality, racism, greed, and the long-standing abuse of power by institutions and individuals with authority and expertise. But education about contemporary propaganda is essential for people of all ages who want to hold on to their democracy in the face of threats.

Sadly, as we are seeing now in the public sphere, it’s far easier to divide than to unite.

Propaganda predates the Internet by millennia, and people have been recognizing, resisting, and falling for the allure of propaganda since well before the time of the Sophists in ancient Greece. Responsible leaders themselves have navigated the dilemma of trying to be an ethical communicator when, as one scholar put it, the business of manipulating public opinion “inevitably pushes towards the use of whatever techniques ‘work.’”[5]

The study of propaganda provides plentiful opportunities to address values, ethics, and morality. As people activate critical thinking skills in recognizing and responding to propaganda, they increase autonomy and personal freedom. As the emotional jolts and the promise of simple solutions and easy answers become easier to spot, people can use the power of inquiry, dialogue, and reflection to evaluate propaganda’s explicit and implicit claims. They can appreciate how propaganda can be interpreted in different ways.

As people understand how propaganda works, they are empowered to become propagandists themselves by creating and sharing media. In using the power of communication and information to make a difference in the world, they have an opportunity to deepen awareness of the moral and ethical tensions that are built into the practice of persuasion. People can learn to discern between propaganda that is designed for personal benefit and propaganda that is trying to benefit society.

The study of propaganda is profoundly linked to the mission of education and civic learning in American schools. If schools are to fulfill their social purpose of preparing people for life in a democratic society, there’s a need to help learners make sense of contemporary propaganda and use the power of inquiry to explore it.

Adapted from Mind Over Media by Renee Hobbs. Copyright © 2020 by Renee Hobbs. All rights reserved.
No part of this excerpt may be reproduced or reprinted without permission in writing from the publisher.

Renee Hobbs is a world- renowned authority on digital and media literacy education. She founded the Harrington School of Communication and Media at the University of Rhode Island and is director of its Media Education Lab. She lives in Newport, Rhode Island.

Mind Over Media: Propaganda Education for a Digital Age