A gripping memoir from the Navy SEALs' young training commander and "Act of Valor" star. A first-ever officer's account of how the SEALs are creating tomorrow's warriors and redefining today's battlefield.

From leadership expert, former Navy SEAL, "American Grit" feature player, and author of Worth Dying For: A Navy SEAL's Call to a Nation, Rorke Denver, the bestselling account of how he helped create the U.S. Navy SEALS of today. Rorke Denver trains the men who become Navy SEALs--the most creative problem solvers on the modern battlefield, ideal warriors for the kinds of wars America is fighting now. With his years of action-packed mission experience and a top training role, Lieutenant Commander Denver understands exactly how tomorrow's soldiers are recruited, sculpted, motivated, and deployed.
Now, Denver takes you inside his personal story and the fascinating, demanding SEAL training program he now oversees. He recounts his experience evolving from a young SEAL hopeful pushing his way through Hell Week, into a warrior engaging in dangerous stealth missions across the globe, and finally into a lieutenant commander directing the indoctrination, requalification programs, and the "Hero or Zero" missions his SEALs undertake.
From his own SEAL training and missions overseas, Denver details how the SEALs' creative operations became front and center in America's War on Terror-and how they are altering warfare everywhere. In fourteen years as a SEAL officer, Rorke Denver tangled with drug lords in Latin America, stood up to violent mobs in Liberia, and battled terrorists in Iraq and Afghanistan. Leading 200 commando missions, he earned the Bronze Star with V for valor. He has also served as flag aide to the admiral in charge and spent the past four years as executive officer of the Navy Special Warfare Center's Advanced Training Command in Coronado, California, directing all phases of the basic and advanced training that prepare men for war in SEAL teams. He recently starred in the film Act of Valor. He is married and has two daughters.
Ellis Henican is a columnist at Newsday and an on-air commentator at the Fox News Channel. He has written two recent New York Times bestsellers, Home Team with New Orleans Saints coach Sean Payton and In the Blink of an Eye with NASCAR legend Michael Waltrip.
With all the SEALs' recent successes, we have been getting a level of acclaim we're not used to. But something important has been missing in this warm burst of publicity . Correcting that is my mission here.
My own SEAL dream was launched by a book. My hope is that this one teaches lessons that go far beyond the battlefield, inspiring a fresh generation of warriors to carry on that dream.
-Lieutenant Commander Rorke Denver 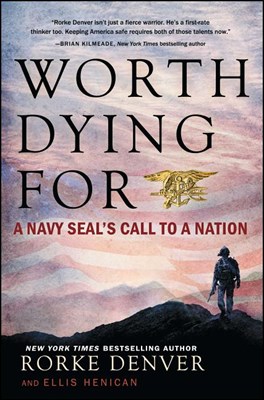 Worth Dying for: A Navy Seal's Call to a Nation