A Manifesto for Planet and Progeny

"Marx and Engels wrote in their Communist Manifesto of 1848 that 'A spectre is haunting Europe—the spectre of Communism,' which 'the Powers of old Europe' were determined to 'exorcise.' This dogma was exorcised in Eastern Europe in 1989, only to be replaced by another one. Today the world is haunted by the spectre of an 'economic man' and his form of capitalism, seen as the be all and end all of human existence. We shall have to stop the be all before it becomes the end all—of our planet and our progeny." 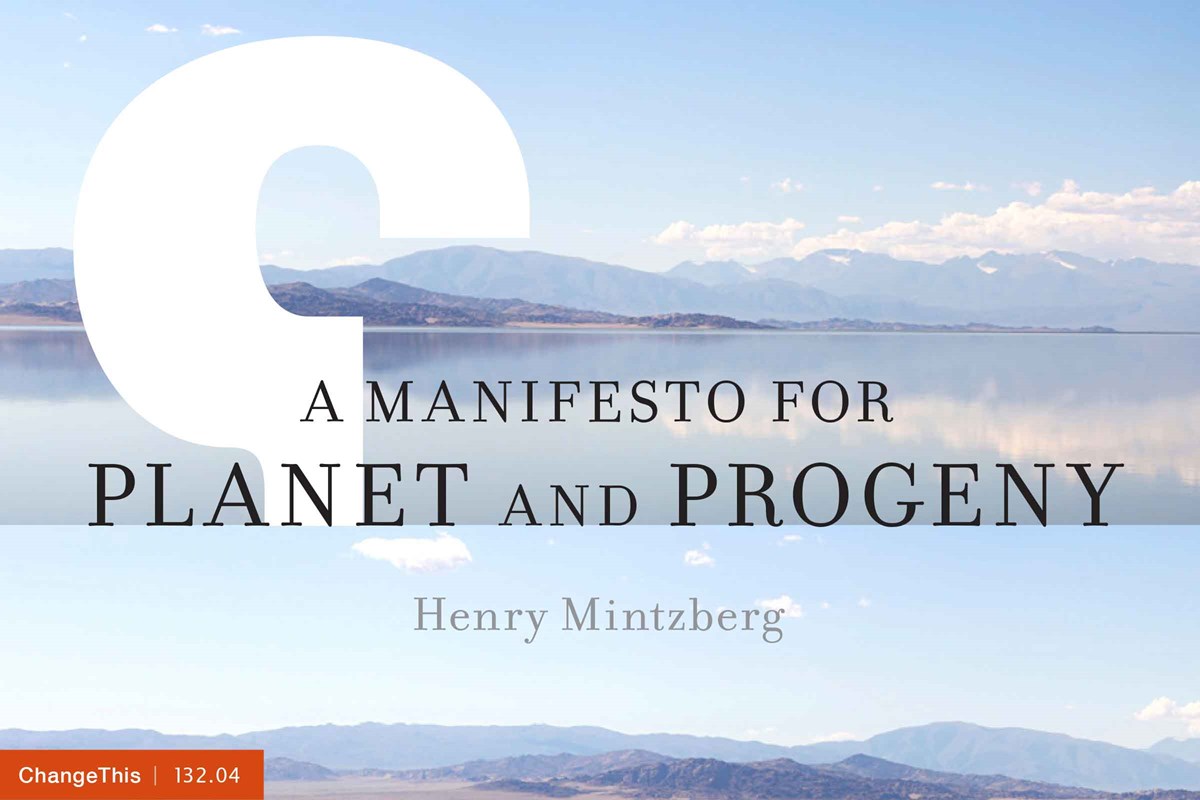 Marx and Engels wrote in their Communist Manifesto of 1848 that “A spectre is haunting Europe— the spectre of Communism”, which “the Powers of old Europe” were determined to “exorcise.”

This dogma was exorcised in Eastern Europe in 1989, only to be replaced by another one. Today the world is haunted by the spectre of an “economic man” and his form of capitalism, seen as the be all and end all of human existence. We shall have to stop the be all before it becomes the end all—of our planet and our progeny.
So, first, let’s lay out exactly what is happening.

A | Our world is dangerously out of balance.

Twentieth Century communism carried the states of Eastern Europe out of balance on the side of their public sectors. That collapsed in 1989. The form of capitalism that has been prevailing ever since is now taking much of the world out of balance on the other side, in favour of private sectors. This imbalance is manifesting itself in a variety of destructive consequences, discussed below, before we consider how to correct it.

B | Environmentally, this imbalance is manifesting itself in the degradation of our air, land, and water, with the potentially catastrophic effects of global warming.

Read about the storms and the toxins, the demise of species and the melting of glaciers.
Then read the latest promise from the G7 nations to end the use of fossil fuels by 2099.
Who will be around to celebrate?

C | Globally, this imbalance is manifesting itself in the demise of our democracies, with many governments coopted domestically and overwhelmed internationally
by private interests.

Many countries are unable to stand up to the forces of globalization, which go largely unregulated, even to those of domestic enterprises clamouring for entitlements to match those of the larger countries. In the United States, which leads the march to imbalance, the invisible hand of the marketplace is being replaced by a visible claw in the Congress. America is having a tea party all right, for big business, under the slogan “No taxation with representation.”

America is having a tea party all right, for big business, under the slogan “No taxation with representation.”

D | Economically, this imbalance is manifesting itself in an increasing divide between rich and poor.

With income disparities on the increase, the rich are becoming increasingly rich and the poor more numerous while those in between are increasingly squeezed. Rich countries tell poor ones that they need to open their markets to international corporations—“level that playing field.” Why: so that the New York Giants can take on some high school team from Timbuktu? With the IMF and the WTO as referees? Economists tell us that greed is good, property is sacred, markets are sufficient, and governments are suspect. This lopsided view of human nature has become ubiquitous—and destructive.

E | Socially, this imbalance is manifesting itself in the denigration of our ourselves.

Consider some of the social consequences in the United States, ostensibly the world’s most
developed nation. The rates of incarceration are the highest in the world and those of
obesity second highest; anti-depressants are the second most prescribed drugs in the country;
levels of poverty are the highest in over 50 years of reporting; voter turnout is 114th of  all nations; social mobility, the country’s most renowned feature, has now fallen way
behind a number of other countries. Is it not time to look forward socially instead of backward economically?

F | Politically in many of the less developed countries, this imbalance is manifesting itself in dogmatic populism or religious fanaticism, both accompanied by despotic leadership.

People frustrated by the consequences of the economic imbalance have been searching for other forms of political organization. Unfortunately, that has been replacing one form of imbalance by another. For example, populism or religious extremism are benefiting certain segments of the population while marginalizing others. As this goes on, thugs take over the presidential palaces.

G | Politically in many of the established democracies, this imbalance is manifesting itself in pendulum and paralyzed politics.

“Free people” frustrated by the capture of their democratic institutions are seeking answers in the old ways, by calling for more government intervention or else greater corporate social responsibility. In the current climate, neither will suffice. Corporate social responsibility will not compensate for all the corporate social irresponsibility we see around us. There is no win-win wonderland out there. Nor can we expect governments that have been co-opted and overwhelmed by private forces suddenly to stand up to them. The reality is that many democratic
countries are now swinging back and forth fruitlessly between left and right, or else sitting paralyzed in the political center, while the march to imbalance continues unabated.

So enough dogma, and enough of the linear politics of left, right, and center. The time has come to rebalance our societies and our world.

We must understand that a healthy society balances itself across three sectors: a respected public sector that serves our collective needs for protection, a responsible private sector that caters to our individual needs for consumption, and a robust plural sector that attends to many of our communal needs for affiliation. (More on this sector below, except to note here that it is not some middle way between left and right, but a sector as different from the other two as they are from each other.) The American Constitution introduced checks on public sector institutions to maintain balance within government. It is time to complete that revolution, worldwide, by enabling each sector to check the power of the others for the sake of balance in its society. Many societies are now on the cusp—either they will tip over to full imbalance, or else their people will pull them back toward balance. Our choice thus becomes simple: we act now or else we lose the capacity to act. But who is this “we”, and how to act?

I | Radical renewal will have to begin in the plural sector.

If responsible businesses will not be able to compensate for the excesses of irresponsible businesses, and public sector governments are being overwhelmed by private sector forces, how is anything to change? This can start with recognition of the importance of a sector that is neither public nor private. Its institutions are numerous, and many are prominent, including famous NGOs, cooperatives, universities and hospitals. (All are owned neither by governments nor private investors. Some are owned by members, others by no-one.) Yet the sector itself is surprisingly obscure, having been lost in the great debates over left versus right (not to mention being obscured by its own variety of inadequate labels, such as “the third sector” and the “voluntary sector”). The plural sector will not only have to take its place alongside those called public and private, but in fact lead the other two toward radical renewal. For in this sector can be found associations with the energy, the inclination, and the independence to address the imbalance, together with social movements that can challenge unacceptable practices and social initiatives that can replace these practices with more acceptable ones.

The time has come to rebalance our societies and “ our world.

II | This plural sector is not some “them”, but you, and I, and especially we, acting together.

Many of us work in businesses and vote for governments, but all of us live in the communities of the plural sector. Here are where changes will have to concentrate, then to extend across communities into a networked world (thanks especially to the social media), and from there to reforms by our more established institutions of government and business.

III | We will have to challenge corruption at every turn, especially the legal corruption that has become so pervasive.

Criminal corruption in our established institutions is bad enough, but at least it can be prosecuted (however inadequately that usually is). Legal corruption is more insidious because it has become so pervasive: for example, in the form of executive compensation, bribery through political donations, back room deals in trade negotiations, and so much more. We need to challenge this at every turn, not in general, but in particular.

Occupying Wall Street is one thing, challenging a bank that has ripped us off is quite another. Complaining about executive compensation is one thing, quite another is to tell your CEO that being paid several hundred times as much as you is not leadership. We can carry placards or we can be clever: a little ingenuity goes an awfully long way, especially against powerful giants. In the memory of David, we require slingshot movements. No-one obliges any of us to use a particular product, hold a particular stock, keep silent when we are outraged.

IV | We will have to cooperate in our communities to develop many more social initiatives to address serious concerns.

V | Above all, we as concerned people and in our associations will have to get our collective act together.

A million social initiatives are doing a great deal of good, on the ground, in so many people’s lives, and millions more will certainly do better. Yet the march to imbalance will continue unabated until we get our collective act together. Community efforts will have to be consolidated into a comprehensive international movement to redress the overall imbalance we now tolerate.
Businesses that compete with each other get their collective act together for common cause: for example, by using their chambers of commerce to lobby for tax reductions. This can serve as a model for plural sector forces that, beyond their immense variety of activities, have one critically common cause: to redress our intolerable imbalance. That has happened before. Leading up to 1947, disparate elements in India coalesced around their common cause, as did the people of the American colonies in 1776. So, for the sake of planet and progeny… GOOD FOLKS OF THE WORLD, WAKE UP!