Into the Light of New Leadership: Family Business Leadership and Building a Path for Succession

"Change is the essence of succession. The challenge for the family business successor is answering two questions: What needs to change in order for our family and business to survive and grow, and what do we need to hold onto that is the foundation of our culture and our success. These questions are the source of the natural tension between the generations in the succession process. The reason that this is such a challenge for a family business successor is that when you are born into a family business, you are born into a story that is already being told. You are born into the shadow of your parents and grandparents. The challenge then becomes the expectation that you will live up to the successes of your forbearers, which can feel like a daunting task." 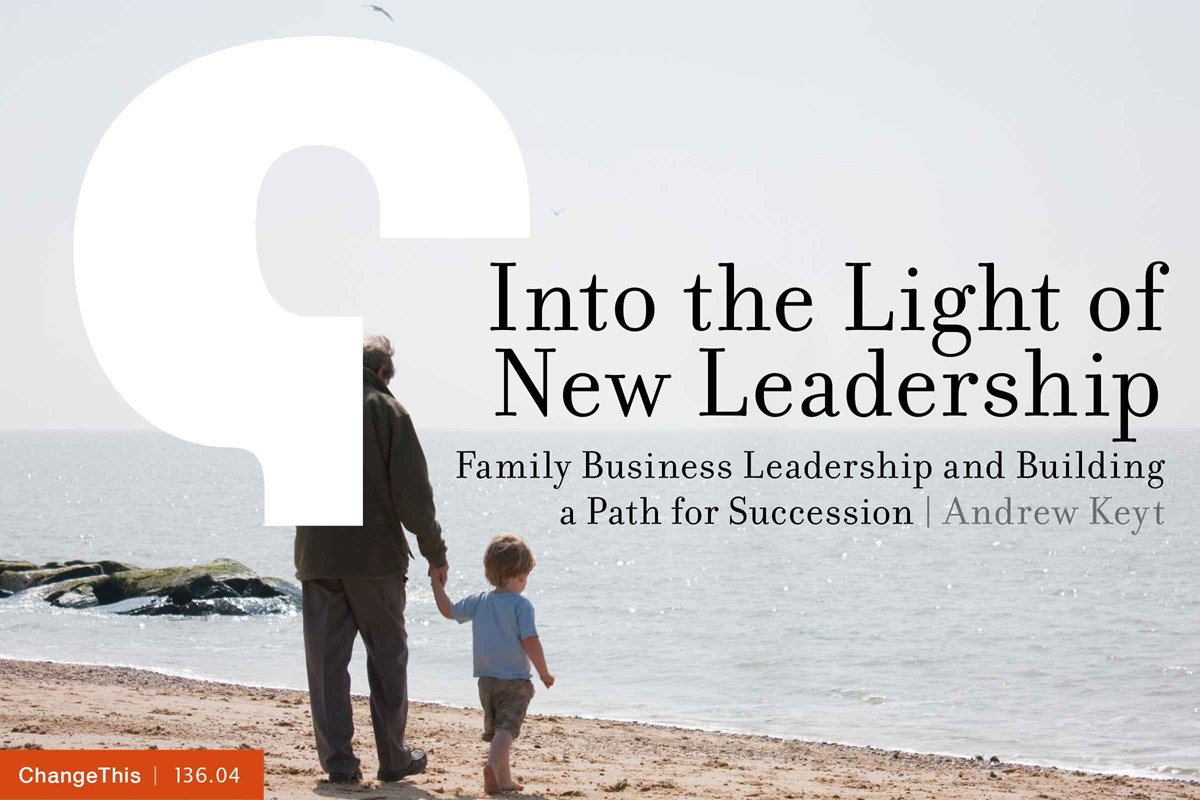 Change is the essence of succession.

The challenge for the family business successor is answering two questions: What needs to change in order for our family and business to survive and grow, and what do we need to hold onto that is the foundation of our culture and our success? These questions are the source of the natural tension between the generations in the succession process.

The shadow is created by the stories that are told about the legendary feats of the family businesses leaders that went before. In the best situations, they offer the successor a foundation of values, sense of stability, and institutional knowledge that helps them reach for new heights. This is embodied by the story of Massimo Ferragamo, of Salvatore Ferragamo, one of the most well-known luxury brands in the world. Though Massimo’s father, Salvatore, died when he was 3 years old, the stories that people tell of Salvatore’s heart and creativity have inspired Massimo to strive for great things and to live the values that these stories of his father represents. They give him a sense of connection to a man that he never knew. So much so that he continues to tell stories of his father that are the foundation of Salvatore Ferragamo’s business culture and success.

But often these shadows can cast a shadow so large that the successor feels that living up to the heroic deeds of their parents is near impossible. These shadows can push some successors to doubt themselves and their ability to lead the family businesses. In my book Myths and Mortals, this is illustrated through the story of Bill Wrigley, Jr. Bill spent the early years of his career emulating his father and in many ways trying to lead in the way that his father led. One night in London, while negotiating a business deal with Indian partners and trying to stay connected with the Wrigley business operations in Canada, as Bill describes it, “I was running around trying to be like my dad.” The stress and the weight of trying to emulate his father’s leadership style were bearing down on him, causing him to feel ill. He felt so ill that he had to remove himself
from the meeting for a short time. This moment caused Bill to think, “If I keep operating like this, I’m not going to make it to 40!”

Hal Steinbrenner continues to have to deal with the successor’s curse, even five years after the death of his father George Steinbrenner, who was affectionately known by the New York media as “The Boss.” After the end of the Yankees season last year, the headlines of the sports page of the New York Post read, “Hal Steinbrenner reveals a very “Un-boss like agenda.” The constant comparisons can be unending.

The “successor’s curse” is that there will always be people around them, employees, customers, the media, people who will assume that the successor only has their job because of their last name.

I’ve examined how some of the most successful successors in the family business world have established a leadership style authentic to them and stepped out of the shadows of their parents.This path starts with the challenge of establishing credibility.

For the family business successor, establishing belief in yourself is often the biggest challenge. The stereotypes of the entitled successor are seen in movies such as “Tommy Boy” and media sensations like Paris Hilton. These stories create the image that the successor cannot be successful, or that they are only credible because of their family name. But the successor needs to know better. The successor has to work hard to build a sense of belief in themselves.

The successor needs to take the responsibility and earn their credibility, so that they can know beyond all the doubts of others that they are qualified and ready to take their role as a leader. We call this Internal Credibility. This doesn’t mean that you don’t have any doubts, it means that you have the fortitude and confidence to move forward in spite of them.

Building this sense of internal credibility requires the successor to build a sense of self awareness and self-confidence. There are both practical and introspective ways to achieve this goal. Practical methods of building self-awareness include taking personality inventories, doing 360 reviews to get feedback about your performance, getting an executive coach or mentor, and getting real world experience. These practical methods often resonate well with the concrete thinkers of the world. Introspective methods are typically less linear and also demand a great deal of self-reflection. These methods include options like executive retreats, practicing mindfulness and meditation, journaling, and therapy.

But a successor’s belief in themselves is not enough. To be successful in leading the changes necessary in the succession process, they must build belief in others. We call this external credibility. Building a track record of performance, showing genuine interest in others, and matching your actions to your words are critical to establishing your credibility with others. Christie Hefner referenced this when she said, “True power is given to you by the people you lead, not by the people who gave you the job.” Few might have believed that Christie was capable and credible of running Playboy, given her academic background in public policy. But through charisma, hard work, performance, and a commitment to her people, she helped her family company through turbulent times.

Although the credibility of the successor is important, it takes more for a family to make it to the next generation. Successful successors commit themselves to building the unity of the family. Research by Astrachan and Pieper shows that business success alone isn’t sufficient if your goal is to establish a long standing family business. Their research showed that in families that had survived for more than 200 years, in addition to the financial success of the business, families needed to have a strong sense of emotional connection to their family members and a sense of pride in and commitment to the business. Indeed it is these emotional variables that seem to be the glue behind long standing family businesses.

A successor who seeks to leverage this family unity and is able to step out of the shadows of their forbearers is able to differentiate themselves from what has gone before. This differentiation is not merely rejecting the ways of the past and moving forward in their own way. That would be inauthentic. Differentiation is authentically wrestling with the two questions that we referenced at the beginning of this manifesto. It involves reaffirming the important values of the family and the organization and establishing a strong sense of vision for the path forward. It requires the successor to develop the ability to stand in the presence of the emotions that change brings (resistance, anxiety, fear) and yet not be driven by those emotions. Bill Wrigley, Jr. embodied this when he said “Respect the past, but always do what is right for the future.”

While I have focused most of my attention here on the individual successor, our research has also shown that, to successfully navigate the changes inherent in succession, a family can support the successor and the process by pursuing strong governance. By strong governance, we mean implementing family meetings, a board of directors, and strategic planning (if they aren’t doing them already).

Family meetings are the foundation of good family governance. The goal of family governance is keeping family members connected closely with each other as well as connected to the business. The process of family meetings has several key components, including educating the family about the business, helping them with skill building (skills such as communication, conflict management, how to read a balance sheet), creating policies that manage family expectations, helping them understand the industry and the business strategy, and perhaps most importantly—have fun and build strong relationships with each other.

Although the credibility of the successor is important, it takes more for a family to make it to the next generation. Successful successors commit themselves to building the unity of the family.

Having a forum that serves as a venue for family questions, getting family input, and organizing family decision-making allows the successor leading the business to place their focus and attention on the changes necessary in succession as well as the long term success of the business. A board of directors is another critical mechanism to support a successor in the succession change process. Our research shows that having a board in place is a critical mechanism for feedback, advice, and accountability as the successor seeks to establish and create their own unique vision for the future of the family business. Their vision typically includes objectives that may be quite different from the generation that went before.

To be effective in fostering a successful succession and helping the successor achieve these objectives, the board should be comprised of both family members as well as individuals who are independent and have no pre-existing connections to the family members or ties to their business. The common mistake made by many family businesses is putting golfing buddies, the family attorney or accountant, or other individuals with close connections to the family on the board. These are usually individuals who have a vested interest in the business and may find it hard to be objective. This prevents the board from achieving its core purpose—providing accountability to management for articulating and achieving a strategy that is consistent with the input, values, and beliefs of the shareholders.

The final process to support successful succession is strategic planning. Where family meetings provide the process to keep the family unified and informed, and the board of directors assures that the management is held accountable and that there is a strategy aligned with the desires and goals of the family, strategic planning is the process whereby management (under the leadership of the successor) establishes a vision for the future of the family business. This vision is built on a foundation of the values of the family and paints the picture for all of the stake holders to understand. It is a vision for the future and how it fulfills the mission of the family business.

To be truly effective, this strategic planning process needs to draw on the values of the family, their passion and long term approach, and engage all of the important stakeholders in charting a path and a vision for the future that compels them to action. While the changes inherent to the family business succession process provide a number of unique challenges for successors, there is a way out of the shadows. Through working hard to establish credibility, creating a vision that is built on the successes and strengths of the successor, and laying a foundation of good governance, a successor can find their way out of the shadows of their ancestors and into the light of their own leadership.