Social Drive: How You Can Create Positive Change, Right Now

"I don't want to do anything to deter anyone from believing there is power in the group, in the network. But it also seems like there is a lot of rhetoric the last few years against the power of one person, against 'hero worship.' Don't get me wrong—I'm not a fan of false, egotistical, self-centered 'heroes' either. But I do believe that the positive social impact one person can create has never been clearer, stronger, and more urgent. Let me explain... " 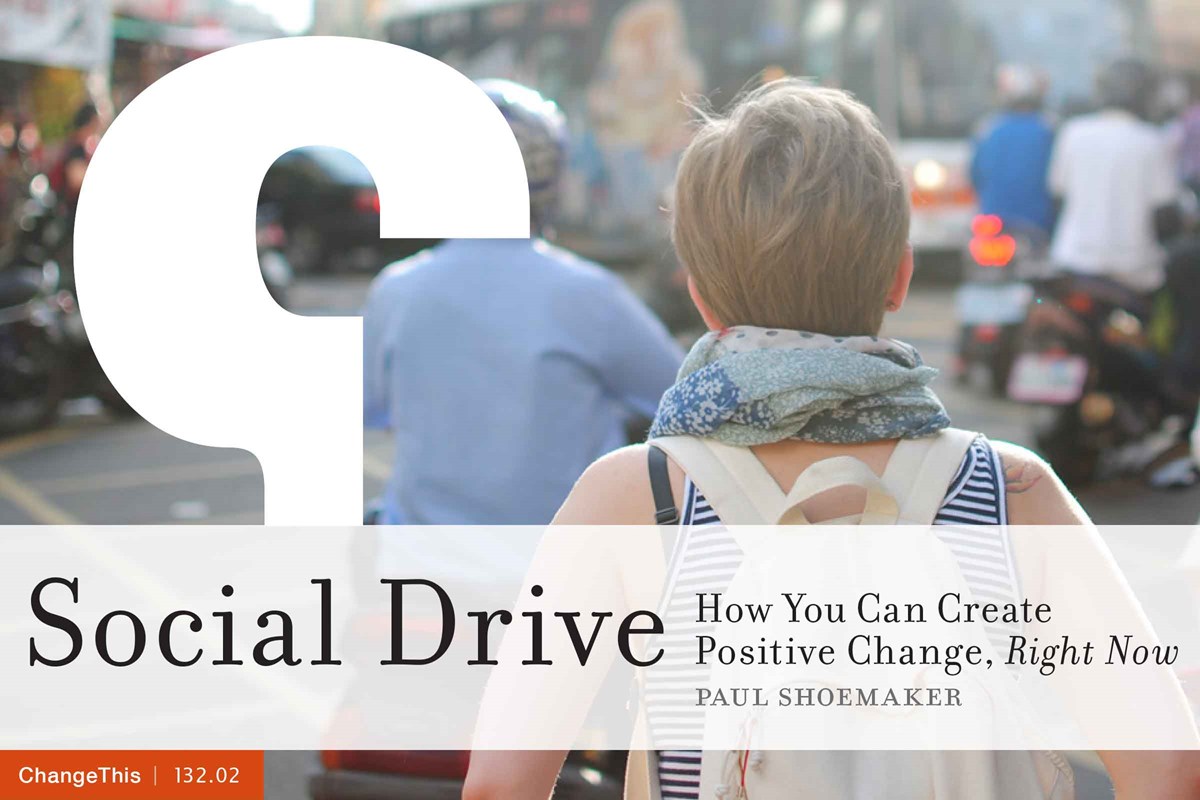 There has never been a time in human history when one person can have more positive impact on their community, their world than today. Never.

We are all familiar with Margaret Mead’s quote, “Never doubt the power of a small group of committed citizens to change the world; indeed it’s the only thing that ever has.” Beautiful and quite often very true. We also know “It takes a village… ” in all it various forms. Also true. I don’t want to do anything to deter anyone from believing there is power in the group, in the network. But it also seems like there is a lot of rhetoric the last few years against the power of one person, against “hero worship.” Don’t get me wrong—I’m not a fan of false, egotistical, self-centered “heroes” either. But I do believe that the positive social impact one person can create has never been clearer, stronger, and more urgent. Let me explain…

I’ve spent the last 17 years working with social entrepreneurs, nonprofit leaders, philanthropists (now that’s a word I don’t like), community leaders, and citizens that want to make their neighborhood or their world a better place for everyone (www.socialventurepartners.org). What I’ve seen first-hand and have been reminded of weekly is how much positive can come from one person. Just one. The only risk in believing in the small group, the village is that one person either waits for “them” or doesn’t realize the (positive) power s/he has to start that small group or to begin to build the village. That’s the important message here. It’s not an either/or, small groups vs. one person, it’s an “and.” I not only believe this, I’ve witnessed it first hand, real time, down the street and around the world.

So the point is not for each one of us to be full of puffery and self-worship, but instead to feel the power of and be empowered as one human being. That implies not waiting for someone else, for the government, for… anyone other than yourself to help create positive change, small or large, now.

There are two dynamics in creating that that are very different than 1,000, 100, even 50 years ago: 1) the social multipliers that amplify the positive impact each person can have, and 2) the roadmap by which each person can realize their greatest potential to have impact.

We are all familiar with the changes in our world that technology, globalization,and connectedness have created. They have changed commerce in profound ways, disrupting industries and products on an ever-accelerating basis. Social media has changed the way we communicate with each other in ways that some of us don’t always like (because of the dwindling of personal, face to face contact), but there is no going back. None of that is new news. But the power of those same three forces that is not always as readily apparent, but will increasingly be in
the years ahead, is how they can also help accelerate the solutions to social challenges like crime, homelessness, education, on and on.

The point is not for each one of us to be full of puffery and self-worship, but instead to feel the power of and be empowered as one human being. That implies not waiting for someone else … “

The definition of a “multiplier” is any device or instrument that amplifies the effect of something or someone else. A simple example is a hammer, it amplifies the effect of your arm. Those three multipliers amplify the effect each of us can now have on the world around us in increasingly positive (or negative) ways. Each of them is a lever you can use to help create change. For example, CompStat has changed the way local police deal with and address crime in ways that have helped reduce violent crime in half in the last 40 years. Technology, globalization and connectedness are multipliers that not only institutions like community police can put to positive use, but each of us as individuals can. Look at how far one person, Sal Khan, has taken his work with Khan Academy, which would not have even been possible just 10 short years ago. Those same three multipliers are accessible and available to each of us, one person at a time.

Let’s be really clear about something: “ this isn’t about self-help, this is about help-the-world.

One can be a bit intimidated by or feel that being an agent for social change is only for the wealthiest, like Melinda and Bill Gates, or most famous, like Bono, among us. That only they have access to the rules of the game because of their wealth and fame. Not true. Each person can find their own roadmap like never before, it’s there for anyone willing to put in the time and some blood, sweat and tears.

When I was writing for ChangeThis, the piece that most inspired me was Brian Solis’ Leading Transformation and Captivating Communities, his message was cut from the same cloth as mine; I think I can help put his urging into action, one person at a time. I think the people that have the most powerful, sustained impact on social issues have three common attributes:

• They’ve found the one cause for which they are not only optimistic about a solution, but also deeply determined to see that change come to fruition (and leave all of the other challenging problems to someone else)

• They’ve looked inside themselves to understand who and what they are at their core, which strongly informs how they should optimally focus their change-the-world time and effort (instead of just doing what their friend asked them to help with or jumping all around, a mile wide and an inch deep).

• And as importantly as any factor, they’ve decide to focus on a cause, a challenge for which they are willing to walk through the fire, the crap and keep on going. They aren’t daunted by the hard, dark places involved in real social change (and in fact they know that they are not truly engaged in creating change until they get close enough to the problem that they can get burned).

Let’s be really clear about something: this isn’t about self-help, this is about help-the-world. If engaging more deeply in your community helps you feel better, that’s great, I hope it happens. But frankly, I don’t care nearly as much about helping each of us feel better as I do helping the world around us “feel” better. There are homeless people, endangered species, impoverished communities, struggling schools that need each of us to help. Not as saviors or heroes, but as fellow human beings in common cause to make our lives better together. Make no mistake, the person you help today may well be the person who helps you, when you are down and out, ten years from now. What goes around comes around.

I’ve seen people from all different walks of life, time, and wealth make profound impacts on fistula, gang violence, youth development, third world literacy, on and on. I have a deep, purposeful faith in the profound impact one person can have on the world. I have heard a particular phrase from so many of those people: “I Can’t Not Do This; It’s not that I can, it’s that I can’t not; I don’t have time to not make an impact,” etc, etc. Their bad grammar speaks to a stickiness, a grit in their commitment to helping being a positive agent for change.

If you ready to “show up” with humility, an active listening mind, and to be a connector, the amount of positive change you can have can be profound. We live in a world where we don’t lack for money or solutions to social problems. We usually have enough money, though we need to spend it much more effectively. We’ve doubled the amount we spend on urban public education, in real dollars, in the last 30 years, to little effect, but we can change that. We don’t lack for solutions. Blueprints for Healthy Youth Development, for example, describes 57 cost-effective programs that meet the highest scientific standard of evidence for promoting youth behavior, education, emotional well-being, health, and positive relationships. What we need most are more people, committed to that one cause, that one social challenge where they just “can’t not” help make a positive change. Too simplistic? Nope, the simplicity is actually what is so powerful and so accessible to each one of us.

If you are satisfied with the way your world, your country, your community, or your neighborhood is working then stop reading this! If you prefer to be comfortable and uninvolved, stop here! If you feel an itch, a burn, a fire inside you to step into the fray and finally feel alive and challenged by what you are up to and how you are living your life, then keep reading on and pick up my new book, Can’t Not Do. I’ve invested the last (and next) 17 years of my life working with and around “ordinary” people who sought to do something extraordinary. To make the world a little better than others believed was possible.

The primary purpose of this manifesto is not to inspire, although it might; it’s not to teach, although it can; instead, it’s meant to spark something unquenchable in each of you to go act, to do.

What you do, how you live your life matters… not a little bit, but a lot. You matter to the world, to your community, to your neighborhood. You matter.

One more look at Mead’s wonderful quote, it’s all true, but what I’ve also witnessed is a small edit that is increasingly true: Never doubt the power of one person to help start to change the world… Indeed that one person can be each of us.