"There is no success without failure. Success is what you do after you fail. The people in my life who have become great successes have also suffered through quite a few failures. Those who avoid failure or try to help others avoid failure are really just impeding their progress. [...] Failure itself is not a bad thing, but repeating the same mistake over and over is a tragedy. There is rarely a time in life when one cannot recover from failure. However, having consecutive failures can be unrecoverable. One of the reasons people have consecutive failures is that they are unable to see the value of or learn from the lesson of the first failed attempt." 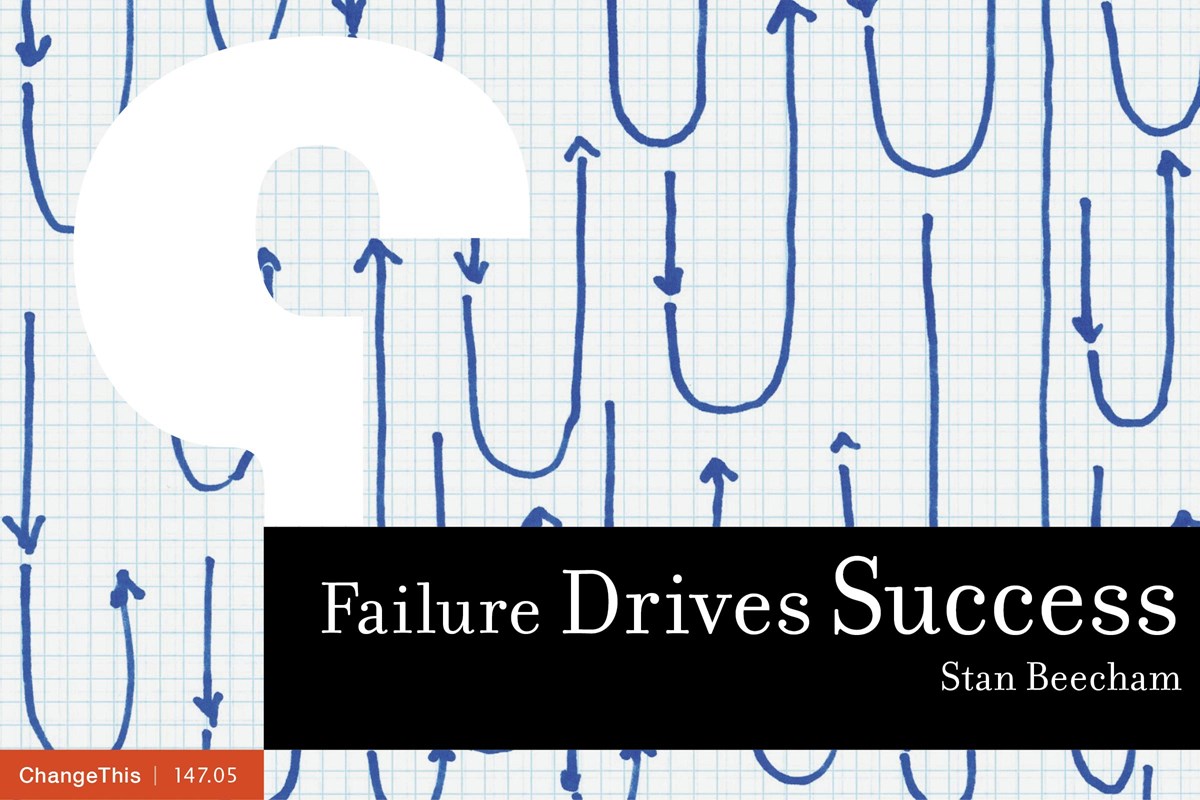 “You have enemies? Good.That means you’ve stood up for something.”

When I first began my career as a sport psychologist, I needed to make a little extra money to support my wife and two children.

A small, private liberal arts college with its main campus some 50 miles from Athens decided to open a satellite campus just a few miles away, so I took the opportunity to teach an introductory psychology class there to make a few extra bucks.

After 10 years of college and three degrees, I thought I should be able to create an interesting and educational learning experience for my students. But it turned out to be much harder than I had thought.

I had never been a fan of teachers who tried to trick or outsmart their students, so I took a very direct and straightforward approach to teaching. I lectured on material from the textbook Monday through Thursday, and I had reviews and weekly tests every Friday. Every question

on the test was included in both one of the lectures that week and in the review that I gave the day of the lecture. On Fridays, as soon as the last student finished his or her test, the students graded their own exams. They knew how they had done immediately. I did this for two reasons: first, research has demonstrated that immediate feedback enhances learning, and second, I hated grading papers.

The only other graded part of the course was a 10-page research review paper. Students picked their own topics regarding psychology, and they were allowed to study anything that was of interest to them.

On the first day, I reviewed the syllabus with the class. It clearly stated that papers were due at the beginning of class on their due date.

The instructions also stated that late papers would not be accepted and that students would receive a grade of zero if their papers were late for any reason.

I explained to the class that part of my job was to prepare them for the real world. One day, they would all (hopefully) have a job and a boss who gave them assignments with a deadline. If they failed to meet the deadline, there would be consequences, including the possibility
of being fired.

Sure enough, on the day the papers were due, one young man failed to appear at the beginning of class. With several minutes remaining, he showed up and took his seat. After class, he approached me and stated that he had completed the paper with plenty of time remaining, but his printer was not working, so he had to drive to a copy center to have his paper printed. He handed me his work and said again how sorry he was that it was late.

“Me too,” I said. “This paper is 30 percent of your grade, and unfortunately, you will receive no points for the paper.”

He couldn’t believe that I wouldn’t accept his paper, and he continued to explain why it was really not a big deal and how it would be okay with him if I wanted to deduct some points for the paper being late.

His protest fell on deaf ears. I suggested that he take his case to the dean of the department.

The following day, the dean asked me to stop by his office before class. I did as requested, and he very politely told me why my decision was not a good one and how it would be in everyone’s best interest if I would accept the student’s paper.

I held my ground and suggested that we were actually doing the student a favor by helping him learn the importance of a deadline and the value of planning ahead. After several more minutes of discussion, we remained at a stalemate.

I suggested to the dean that if he did not like my decision, he could simply override it by changing the grade I gave the student after I turned in my grades for the quarter. He asked me to grade the paper anyway and submit it to him with my final grades.

I gave the kid an 80 on his paper. It was actually pretty good. But I gave him a zero in the grade book.

I later learned that the dean had taken my grade of 80, subtracted 10 points for tardiness, and had given the student credit for the paper.

The following semester, I was asked to come back to the school to teach another course. The dean told me that my teacher evaluation scores were very good and that the kids really liked me. I declined. What’s the use of being a teacher if you can’t teach what really matters most?

Demanding the best from people, holding them accountable, not accepting their excuses, and telling them to do something again are not acts of brutality—they are acts of love. If you truly care about people, you will run the risk of their becoming angry with you when
you do not acquiesce when things get hard.

The best managers and coaches challenge their people. They push them to their limits, and they create stressful situations so that when difficult times appear, they will be prepared.

There is no success without failure. Success is what you do after you fail. The people in my life who have become great successes have also suffered through quite a few failures. Those who avoid failure or try to help others avoid failure are really just impeding their progress.

I believe we failed in our responsibility when it came to the student who did not turn in his paper on time. Why? Because we did not allow him to fail and learn from his experience. I imagine he went into the workforce and failed to meet other deadlines because he never learned from the pain of failure the first time.

I have a good friend who has been a college professor for many years. He recently told me that parents frequently call him to discuss their child’s grade in his class. He stated that when he first started teaching, he never received phone calls from parents. Yet now, it’s a regular occurrence, and the parent usually requests that he make a special exception for their child. After all, that’s what they have done throughout the child’s entire life.

Failure itself is not a bad thing, but repeating the same mistake over and over is a tragedy. There is rarely a time in life when one cannot recover from failure. However, having consecutive failures can be unrecoverable. One of the reasons people have consecutive failures is
that they are unable to see the value of or learn from the lesson of the first failed attempt.

There is no success without failure. Success is what you do after you fail. … Those who avoid failure or try to help others avoid failure are really just impeding their progress.

Golf is a great example of this truth. Professional golfers will play a poor shot, but they almost always use the poor shot to help them refocus and become more intentional in their next shot. Therefore, they rarely hit two bad shots in a row.

Amateur golfers, on the other hand, tend to respond differently to a poor shot. They become angry and lose their ability to focus on the task at hand, and they are more likely to hit consecutive poor shots—a mistake from which it is almost impossible to recover.

One of the best stories that demonstrate the interconnected relationship of success and failure involves one of the best athletes in history. Michael Jordan was a tenth grader at Laney High School in Wilmington, North Carolina, when he failed to make the varsity basketball team.

The story goes that Michael was only 5 feet, 11 inches at the time, and he was not yet good enough to play at the varsity level. To make matters worse, one of his tenth-grade friends— who was taller and better—did make the varsity team. This failure was so humiliating to
Michael that he worked hard to make sure it never happened again. It was during this time that Michael developed one of the best-known work ethics in all of sports. He was able to take this experience of failure and use it to propel him for years to come. In Michael’s own
words, “It all started when Coach Herring cut me. What it did was instill some values in me. It was a lesson to me to dig within myself.”

One can’t help but wonder what would have happened if the coach had decided not to cut Michael Jordan from the team and let him move up with his friend. There would be no harm in showing a kid some mercy, right? Experiencing success instead of failure could very
well have been a curse to Michael, and we may have never seen the greatest basketball player of all time had he made varsity in his tenth grade year.

To prove my point, you know the name of the tenth grader who made the team instead of Michael Jordan? His name is Harvest Leroy Smith.

Michael was so appreciative of the lesson he learned from Smith and Coach Herring that he would frequently check into hotels with the alias “Leroy Smith” so as not to alert others that he was in town.

Demanding the best from people, holding them accountable, not accepting their excuses, and telling them to do something again are not acts of brutality—they are acts of love.

Don’t feel too bad for Mr. Smith though. Even though he is not widely known, he did attend the University of North Carolina, Charlotte, on a basketball scholarship, and he played some pro ball overseas.

Smith later became a successful businessman, and he will always enjoy the satisfaction of knowing he played a key role in the development of one of the greatest athletes of our time. The common belief is that you become successful by avoiding failure. But this is not true,
because successful people fail! Everyone fails. Instead, success is defined by your response to failure. When things are not going your way, these challenges or “failures” in life have the capacity to be very informative. They help us create a better awareness of ourselves.
Not only can you not avoid failure, but you need failure to get better. When you fail—and you will—run into it and learn the lesson right away.