Fast Coaching for Busy People: How to Coach in 10 Minutes or Less

Sure, we'd all love to sit down for a nice 45 minute chat with everyone on the team if we could, but most of us don't even get to do that with the people we love in our life. At work, people are over-busy and overwhelmed. Meetings fill the day, and emails clog our inbox. And there's work to do as well. Don't despair. Coaching's something everyone can do, do quickly, and do in a way that will have a significant impact on performance and satisfaction. But to make it work for the time-crunched manager, you need to follow three principles. 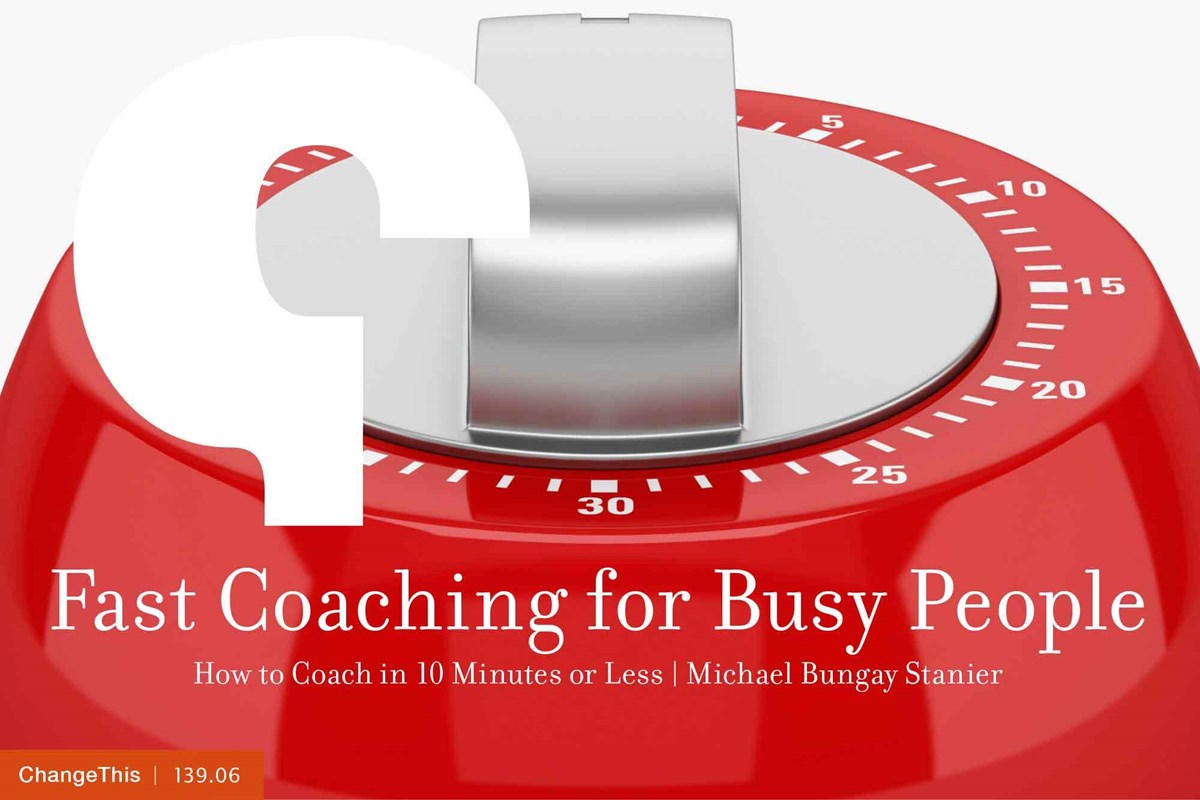 Daniel Goleman—the very man who popularized Emotional Intelligence—wrote a useful article for Harvard Business Review in 2000. "Leadership That Gets Results" set out six different leadership styles, each appropriate to certain circumstances, each with its own pros and cons.

Coaching was one of those leadership styles, one that had a "markedly positive" impact on performance, climate (culture) and the bottom line. It was also the least used. Why? Goleman wrote, "Many leaders told us they don't have the time in this high-pressure economy for the slow and tedious work of teaching people and helping them grow."

Pfffft! The year 2000? Remember how quaintly slow the pace of work was then? How delightfully unconnected we all were?

But even as things have gotten faster and more complex, coaching's importance has only continued to rise. With Millennials now more than 50% of the workforce, every organization talks about the importance of managers and leaders being able to coach.

But who has the time?

Honestly. Sure, we'd all love to sit down for a nice 45 minute chat with everyone on the team if we could, but most of us don't even get to do that with the people we love in our life. At work, people are over-busy and overwhelmed. Meetings fill the day, and emails clog our inbox. And there's work to do as well.

Don't despair. Coaching's something everyone can do, do quickly, and do in a way that will have a significant impact on performance and satisfaction. But to make it work for the time-crunched manager, you need to follow three principles that break the current rules that pigeonhole coaching, in Goleman's words, as "slow and tedious."

Here are four practical tactics to make your coaching fast and effective.

If you've going to coach in 10 minutes or less, you've got to get the heart of the issue fast.

My favorite question, the Kickstart Question, is "What's on your mind?" It works so well because it's both open (it's your choice, what should we talk about?) but it's also got focus built right in (let's talk about something important, something that's worrying you or exciting you or consuming you.) It takes you quickly into a conversation that matters, rather than meandering through small talk or spinning your wheels on data that's more distracting than it is useful.

There are variations on this, so pick the one you like the most: "Where should we start?" "What's most useful for us to look at first?"

You'll find the Kickstart Question particularly powerful if you're currently finding your "weekly check-in" meetings more of a curse than a blessing. Too often these involve two people going through the motions of "reporting out," an experience that fills both parties with a nagging sense of dread and boredom. The box might be ticked, but there's no value added.

Imagine instead if you started those weekly check-ins asking, "What's on your mind?" You'd spend your time focused on the stuff that matters, rather than just getting an update.

If you're going to coach in 10 minutes, you have to learn to calm your Advice Monster.

Most of us as managers and leaders are good people looking to do the best we can by our people. And we're certain that, for the most part, that means offering up the insights, giving them the answers, and providing the solutions whenever they come a-calling.

No doubt there's a time and place for good advice. But it's not nearly as often as you think (nor is your advice as good as you hope). In fact, your default advice-giving behavior often generates two of the vicious cycles of the modern manager: an overdependent team, and a deep sense of overwhelm from having too much to do (your work and their work, too).

A recent sidebar in Harvard Business Review asked people to self-identify what style of leader they were from seven possible choices. The top pick at 23% was Collaborator—described as "empathetic, team-building, coaching oriented."

Most managers I've observed are not great at coaching. Like the study which found doctors waited only 18 seconds before interrupting their patients, most managers move into advice-giving, solution-prompting, answer-offering mode almost instantly.

As a starting point, when you're in a conversation, notice how quickly you trade in curiosity for giving advice. You'll be shocked at how quickly it happens.

Your default advice-giving behavior often generates two of the vicious cycles of the modern manager: " an overdependent team, and a deep sense of overwhelm from having too much to do.

Many of us have a fixed idea of coaching being an extended session in a closed room somewhere. It's an occasional, scheduled, slightly awkward conversation that's either one small step up from therapy or (somehow more disappointingly) just the same old conversation but now labeled "coaching."

Throw that idea out the window.

If you're going to make coaching part of your repertoire, the first thing to do is admit that you don't have time to add it to your already full schedule. It will forever be important but not urgent.

Rather, think of coaching as a way of transforming all the current interactions you already have. It's not about doing more, it's about doing things differently.

And this isn't just about the obvious interactions: your weekly one on ones, the team meeting, the regular conversations. It's also about all those virtual interactions. You know that long email you occasionally get? The one that goes on for paragraphs, the one you have to re-read two of three times to make sense of, the one where you're not sure exactly what they're asking for, the one you finally start answering by typing "see my comments below" and then you dish out your suggestions.

You can change that. One of the most useful questions here is the Lazy Question: How can I help? (A blunter version is, "What do you want from me?")

Hi [name]. Thanks for the email—looks like there's a lot going on. Out of curiosity, what do you want from me here?

Bottom line: Less advice. More curiosity. In as many interactions as possible.

If you're going to coach in 10 minutes or less, you need to know how to finish your conversations in a way that's powerful and useful.

Of the very many definitions of coaching there are in the world, the one that seems to ring most bells for most people comes from Sir John Whitmore. He says the purpose of coaching is "unlocking a person's potential ... helping them learn rather than teaching them." When they learn, they become more competent, more self-sufficient, and more successful. That's good for you and it's good for them.

But helping people learn is difficult. Sometimes it feels like even though you've hit them across the head repeatedly with an obvious concept (or a shovel perhaps), somehow the point you've been trying to make hasn't stuck. Here's why:

People don't really learn when you tell them something.

They don't even really learn when they do something.

They start learning, start creating new neural pathways, only when they have a chance to recall and reflect on what just happened.

That's why the Learning Question is so powerful, and your secret for how to finish strong: "What was most useful here for you?"

There are of course variations you can try: What was most valuable for you? What do you know now that you didn't know before? What should we do differently next time?

Asking the Learning Question achieves three things at once. First, you help them learn by having them find the value in the conversation. They may well have missed it otherwise. Second, you get feedback about what is (and isn't) working in the conversation, so you can do better next time. And finally, you frame the conversation as a useful one. That just helps your reputation as a manager, as well as building a more resilient relationship.

And don't just save this for coaching questions. Add a Learning Question on to the end of your team meetings, your conversations with your boss, the calls with your vendors and suppliers... actually, with almost everybody. Learning helps them and it helps you too.

If you're going to coach in 10 minutes or less, you need to know how to finish your conversations " in a way that's powerful and useful.

You can coach. Even if you're busy.

Especially if you're busy. When we feel the pressure to get things done, it's all too easy to default to giving advice and providing solutions. That's often a pyrrhic victory. We end up with an overdependant team, we're overwhelmed, and we're mired in getting things done at all costs.

Adapting some of the principles and practices of building a coaching habit may be a little uncomfortable at first—for you and for the people you lead— but the upshot is you'll work less hard and have more impact. And who doesn't want that?