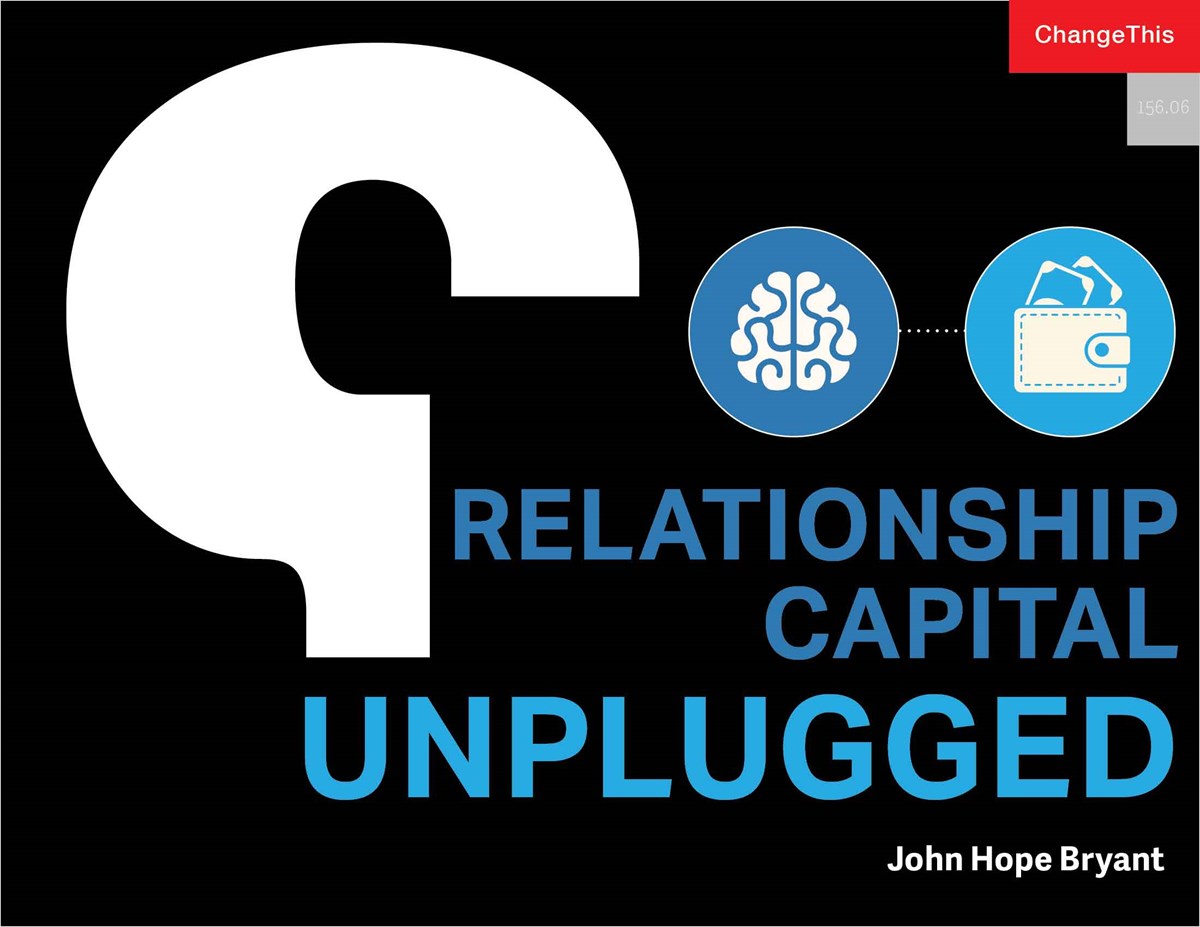 A super majority of people here in the United States and around the world have one thing in common: they never got what I call “the Memo.”

They were never told how this world actually works. How do you prosper? How do you excel? At a more defensive and basic level, how do you protect yourself from societal injustices and a lack of fair play in the twenty-first century?

This super majority of people who never got the Memo make up what I call the Invisible Class. They come in all shapes, colors, and sizes.

The Invisible Class includes American urban youth with too much time on their hands. Even with a real passion for success and a desire for economic freedom, they don’t have the education to differentiate themselves in a market economy. Worst of all, they don’t possess enough real opportunity in their lives to divert their attention from the dangerous and life-altering call of the streets.

It includes rural adults in small towns with a high-school education, good hands and a hearty work ethic that fifty years ago would have earned them a “family wage” with blue-collar skills. But these “assets” provide not much of any real aspirational value today.

They are residents of the poor and disconnected suburbs in cities throughout Europe. I am talking about people in the areas right outside of Paris and London who have rioted in recent years against the changes they see happening to their ways of living.

I am talking about large swaths of people under the age of twenty-five in the Middle East and North Africa region—increasingly, the majority of the population in countries such as Saudi Arabia and Morocco. Young, educated, internet connected, jobless, and frustrated.

The Invisible Class are the immigrants flooding into countries from civil-war ravaged lands the world over.

The Invisible Class includes gang members and gang organizers. They are the illegal, unethical entrepreneurs that the world knows to be drug dealers. Dumb (in terms of their business plans and chosen toxic professions) but far from stupid.

The Invisible Class also includes the struggling American middle class, making an average of $50,000 a year and still having “too much month at the end of their money.”

The Invisible Class are people who are outside of the economic system of success and they don’t really know why, so, understandably, they get frustrated by it. They are angry with it. They don’t know how to get ahead in the midst of the growing global competition for jobs and opportunity.

In the United States, for example, these are people who are not truly “seen” by the economy, by politicians, by public policymakers, by big business interests, or even largely by academics and the media. Worst of all, increasingly, they don’t even see themselves. They don’t see their own potential. They—like the aspirational nation they live in—have lost what I call their storyline. They have lost connection with that special sauce in and of America that made this nation successful in the first place. They have totally disconnected from the fact that most of all the wealth in this nation and in almost every other developed country in the world was built upon the backs and labor, and aggregate spending, of poor people.

From that disconnect, a fundamental breach in the social contract has occured. The Invisible Class is no longer valued as it once was (even in lip service), and is experiencing a twenty-first century crisis of confidence and personal faith, which is impacting its self-esteem.

A super majority of people here in the United States and around the world have one thing in common: they never got what I call “the Memo.”

This group equals more than one-hundred-and-fifty million people in the United States of America, and more than five billion of the world’s seven billion population around the world.

These are people—black, white, brown, red, or yellow—who never got the Memo.

The people in this group have a lot in common (despite racial differences) but they have been pitted against each other.

“Someone (other than me) has to be the one to blame for the mess called my life,” goes the narrative, which plays on deep fears of a class environment and standards of living in constant decline.

This narrative is offensive to the soul, as it gets each sub-group further and further from the essential truths about their respective lives, truths needed for a reawakening of their potential.

I began writing my new book, The Memo, because it sticks in my brain that the wealthiest 85 individuals have more wealth than 3.5 billion people on the planet, and this is simply not sustainable. It is immoral. It is not good—even for the wealthy that belong to the Club of 85. Even more troubling to me, in the United States, the wealthiest 1 percent captured 95 percent of post-financial crisis growth since 2009, while the bottom 90 percent became poorer. I wanted to write something for the bottom 90 percent—not just for people with low credit scores in rundown neighborhoods, but for everyone who is struggling, and that is almost everyone, it seems. I am speaking to black and white, rich and poor, Republican and Democrat, anyone who is seeing their life seep away—and wants their dream back.

You may have gotten one or two of the five rules of economic independence, but you still don’t feel economically independent. You may have a 725 credit score, but you’re sitting at your computer all day and your relationships are dwindling and it’s preventing you from getting ahead. You may be sitting there thinking, “If I’m doing all the right things and still struggling, then the system has to be rigged.” No, actually, there’s just some important stuff nobody told you. Nobody gave you the Memo.

What if I told you there was a reason that you were not as successful as you thought you should be, and it had little to nothing to do with whether you were smart, or competent, or whether you qualified for the job or post you applied for?

This Inner Capital is made up of your mind-set, relationships, knowledge, and spirit. If you don’t have Inner Capital, all the money in the world cannot set you free.

What if I told you that you had everything you needed in this life for success— except the right Relationship Capital?

Capital comes from the Latin root word “capitis,” meaning “knowledge in the head.” And once you have satisfied your basic sustenance needs—food, water, health, and a roof over your head— poverty has more to do with what is in your head than what’s in your wallet.

Who are you hanging around? What is your Relationship Capital, and what are you doing with it? How are you leveraging it? Can you leverage it? Or is it a liability?

If you don’t manage your Relationship Capital well, and if you pay zero attention to what I am writing about here, then this is what I have to tell you: “if you hang around 9 broke people, you will be the 10th.”

This is Relationship Capital Unplugged.

And the opposite is also true. This is not an admonition to ignore or dismiss poor people (after all, I wrote a book called How the Poor Can Save Capitalism), it is but a reminder that we are all a product of the relationships we invest in.

Why do you think people continue to attend Harvard University, paying top dollar for the privilege? Do they attend Harvard University, and pay four times more than any other university in their own state, because they believe they will end up four times smarter when they graduate from Harvard? The answer to that question is no. Absolutely not. There is something else altogether different going on here that is critically important for you to know and to understand, because it flows through the entirety of your life. Relationship Capital is another form of Capital. It has (real) value.

People attend Harvard for one simple and absolutely satisfying yet unsaid reason; that when they graduate, the graduating class of 2018 for Harvard University will ‘hook each other up’ for the next 40 years. The are investing in relationships and connections that Harvard provides. When you show up at a job interview, and the interviewer discovers that you too are from Harvard University, the entire tone and tenor of that discussion about a job or career changes. You are part of the Club. You have embedded Relationship Capital.

It is not just about how smart you are, or whether you got a great GPA, or whether you can do the job. Relationship Capital is probably responsible for half of all success in the world today. This is certainly true in the upper reaches of society. In fact, there it probably accounts for more like 75% of success.

The world has idiots and fools running companies and countries, and brilliant people who are homeless—precisely because competency and being smart is not enough. We have to understand the game, and how to play it.

All wealth—financial and otherwise—is built upon relationships. Think about it. If I gave you $1 billion and put you on a desert island, that money would be worthless. Your mental, spiritual, and financial capital is valuable only to the extent that you can share it and spend it with others. The more people with whom you can share and build capital, the more “Relationship Capital” you have.

Your mental, spiritual, and financial capital is valuable only to the extent that you can share it and spend it with others.

The level of legitimate trust in any real relationship determines the amount of capital you have. If you are a criminal getting people to do what you want with brute force, fear, and intimidation, you aren’t going to have a lot of relationship capital (nor is it sustainable).

If you have a friend who “borrows” $20 every week but never returns it, you will eventually distrust him, and you will not continue to “lend” him money. His Relationship Capital will be zero. Financial Express gives businesses fancy investment ratings—basically credit scores— but this is exactly the same thing as grading your ability to trust your friend to repay you. A credit score is just a mathematical way of determining how much Relationship Capital you would have if you asked a banker to lend you some money.

Who is in your Circle of Influence? This is a BIG and important question.

The world works in a series of concentric circles. Circles of wealth, power, education, access, and opportunity not only swirl within the same concentric circle rings, or sets of related and connected rings, they also build on themselves. They feed on each other.

Not everyone is going to have access to the Harvard advantage in life. But you still have Relationship Capital in your life that you can, and must, begin to build upon and invest. It just might be the determining factor between success and something else— for yourself and the next generation.

John Hope Bryant is the founder, chairman, and CEO of Operation HOPE Inc., CEO of Bryant Group Ventures, CEO of Promise Homes Company, and cofounder of Global Dignity. He has been recognized by the last five US presidents and served as an advisor for the last three. Bryant is the recipient of hundreds of awards and citations for his work, including being named as one of the Atlanta Business Chronicle’s Most Admired CEOs for 2018, American Banker’s 2016 Innovator of the Year, Inc.’s the World’s 10 Top CEOs (honorable mention), and Time’s 50 for the Future. He is the author of three bestselling books, The Memo, How the Poor Can Save Capitalism, and Love Leadership.