Having Said That: Business Clichés to Avoid Like the Plague

“Caught between a rock and a hard place, listening to your CEO’s dry-as-dust dogand- pony show, you resist checking your phone because you’re a team player in a well-oiled machine. But left to your own devices, your attention turns to Minecraft or Instagram when the boss declares, ‘We’re raising the bar and pushing the envelope.’

It’s time for a paradigm shift; perhaps a sea change.

Clichés, it goes without saying, are integral to daily discourse. Familiarity with their meanings puts us all on the same page in order to get the ball rolling toward a win-win situation. (But, of course, only time will tell.)” 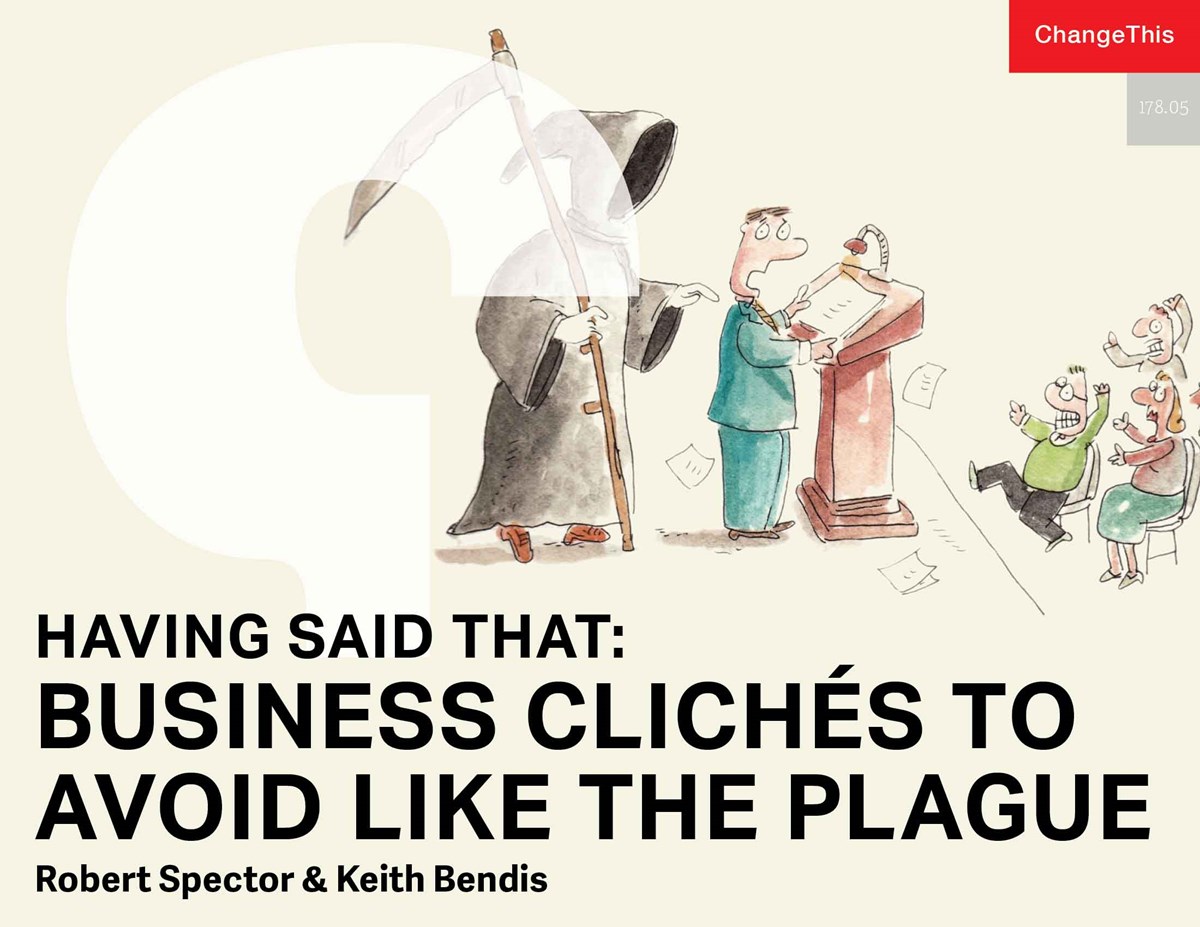 Clichés are integral to daily discourse.

Phrases become clichés because they contain common knowledge and truth. Our familiarity with their meanings puts us all on the same page in order to get the ball rolling toward a win-win situation. (Of course, only time will tell.)

But at the end of the day, even the cleverest cliché ceases to be a magic bullet because its usage reveals a lack of imagination or originality.

As we engaged one another and reflected on our respective tenures in the professional world, we (illustrator Keith Bendis and writer Robert Spector) began to surface some of these go-to clichés. Over time, we decided to drill down into a mother lode of humor by spoofing the business banalities that we’ve all heard, read, and (we admit it!) used ourselves. We thought we could maybe move the needle on the issue, even right-size the use of such phrases.

We hope to amuse, inspire (or shame) company leaders, writers, and speakers to discover more imaginative ways to communicate. In other words, to create new clichés.

Thinking Outside the Box 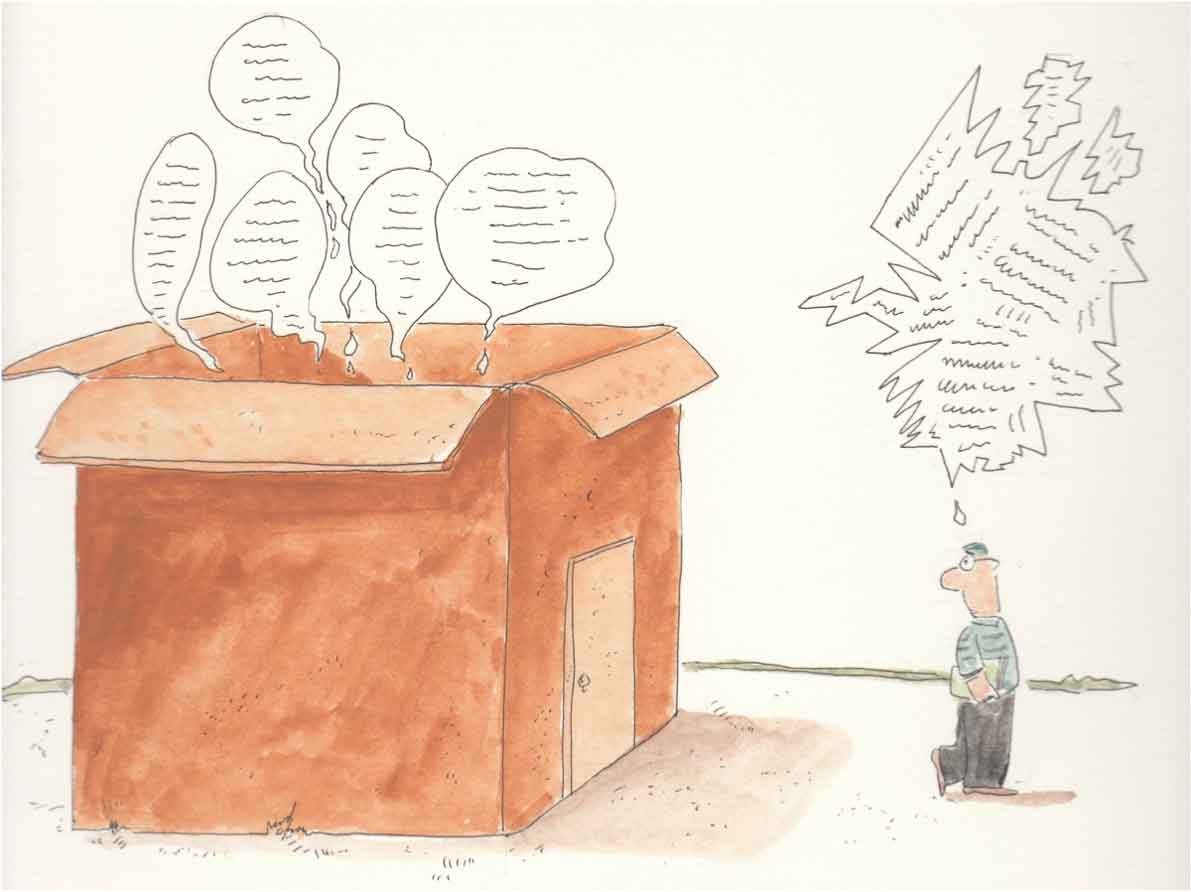 Trying to solve a problem by approaching it from another angle—i.e., thinking differently from the accepted wisdom.

Most companies give lip service to creative thinking because boldness is not in their DNA. The last person at the company who thought outside the box is now on the street living in a box. 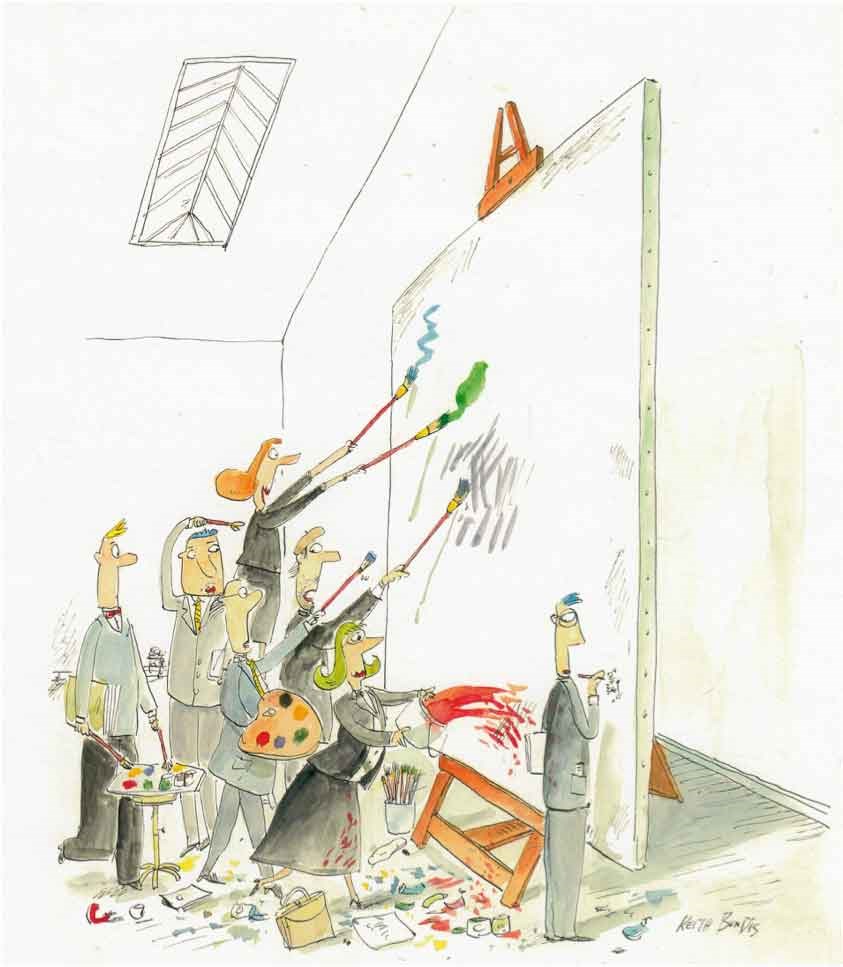 Who doesn’t want to be on the “creative team”? Those people are clever and inventive and innovative—and much hipper than you. They are not in the same zip code as that box that everybody wants to think out of.

But if one team is labeled “creative,” that means that everybody else is NOT creative. How insulting! What, you never heard of creative accounting?

In the late 17th Century, they were called “pea counters,” from the German erbsen-zähler. Eventually accountants and bookkeepers stopped counting peas and began counting beans.

Every business needs a bean counter whose job it is to save costs and to quibble over every detail, separating the coffee from the carob; the lima from the lentil. 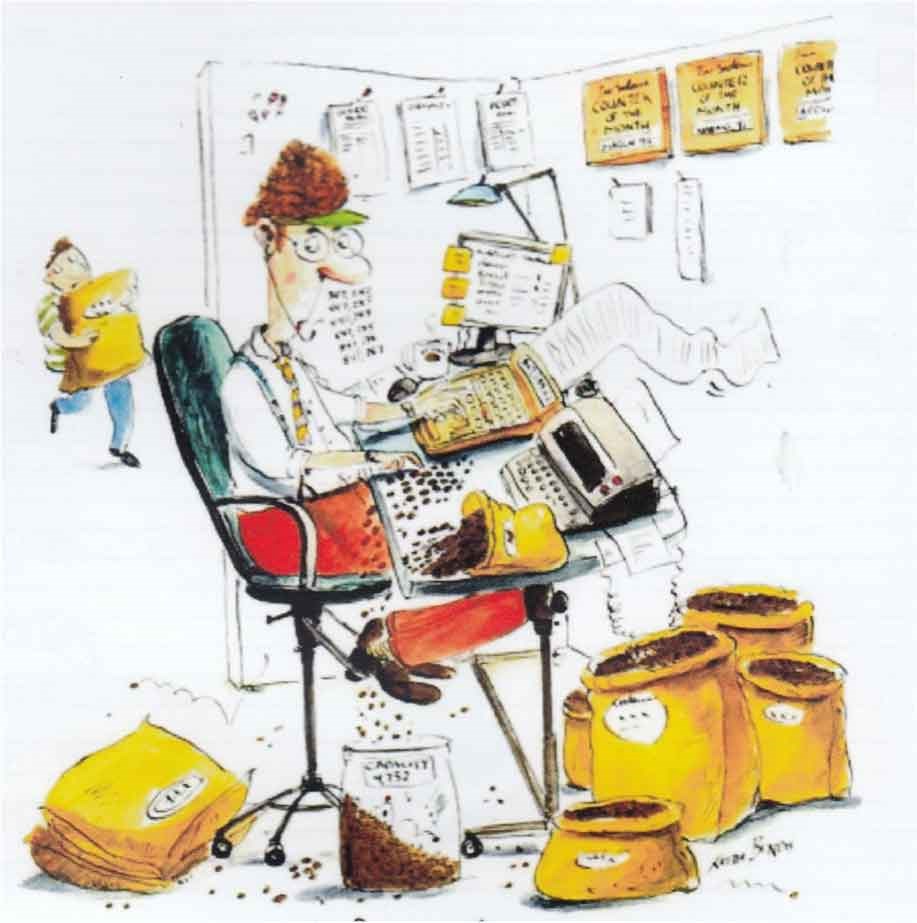 So, why do we disparage these persnickety perfectionists by calling them, “little more than bean counters?” Why? Because their job seems so deadly, mind-numbing, soul-stealing DULL.

But don’t underestimate the bean counters. To be “full of beans” is to be bursting with energy and life.

And if your business is ever audited—and somebody else cooked the books—the counter is quite prepared to spill the beans.

“Don’t underestimate the bean counters. To be “full of beans” is to be bursting with energy and life.”

Getting On The Same Page 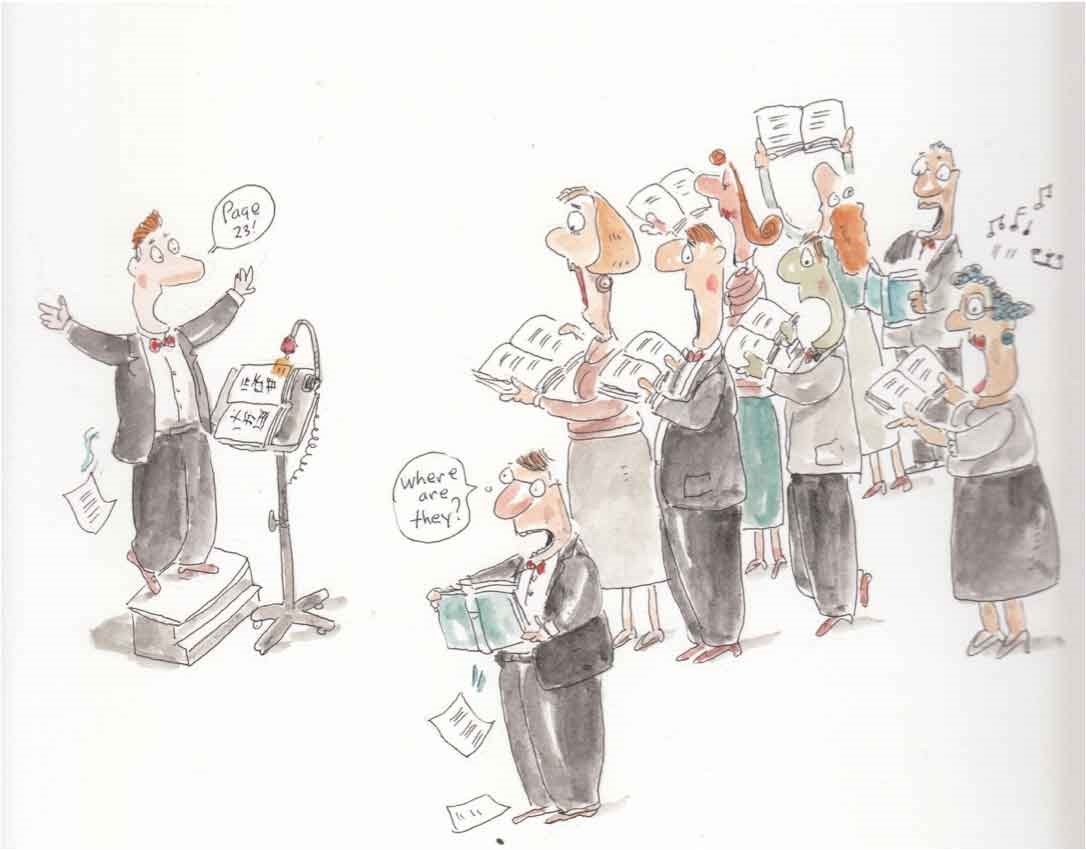 Requiring everyone to take note of an agreed-upon arrangement, in order to play in tune.

Easier said than done. Sometimes two people can be looking AT the same page, but not be ON the same page. Then it’s time to preach to the choir to get them singing from the same hymnal.

Moving In Another Direction

When a company is too uncomfortable with the truth, or afraid of hurting your feelings because you’ve been rejected, they offer this spineless answer to avoid saying that you are either:

Wherever “another direction” is going, it is way the hell away from you.

Can be used for going after the surest sales prospects (i.e., cherry-picking) or cutting costs by firing the least essential employees, which classifies them as “canned” fruit.

Eventually, you must deal with the tougher issues because, well, that’s the way the worm turns. 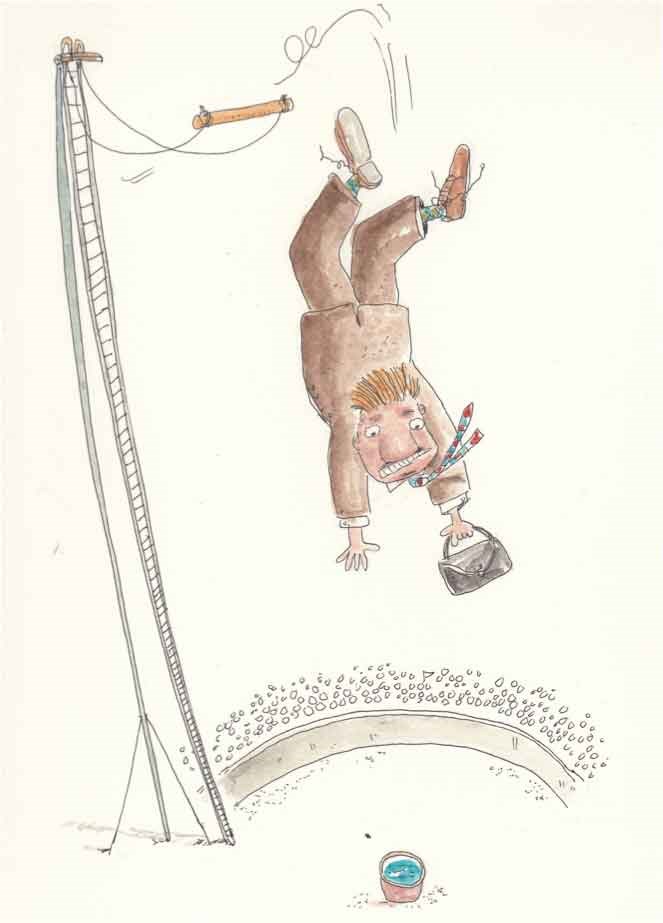 In the early 1990s, a New York hedge-fund trader named Jeff Bezos was asked to do a comprehensive analysis of a new technology called the Internet, to see if it had commercial potential. (Spoiler alert: it did.)

Bezos did a “deep dive” into the murky waters of the then-mysterious World Wide Web, got excited about the possibilities, quit the hedge fund, moved to Seattle, launched Amazon.com and eventually became the richest person on Earth. Today “Dive Deep” is one of the core leadership principles of the world’s most valuable brand.

Not every deep dive will lead to buried treasure, but you’ll never get anywhere if you don’t take the plunge.

And if your research turns out to be a dry hole, you can always drown your sorrows at your favorite watering hole—the friendly neighborhood dive.

Waiting for Your Ship to Come In 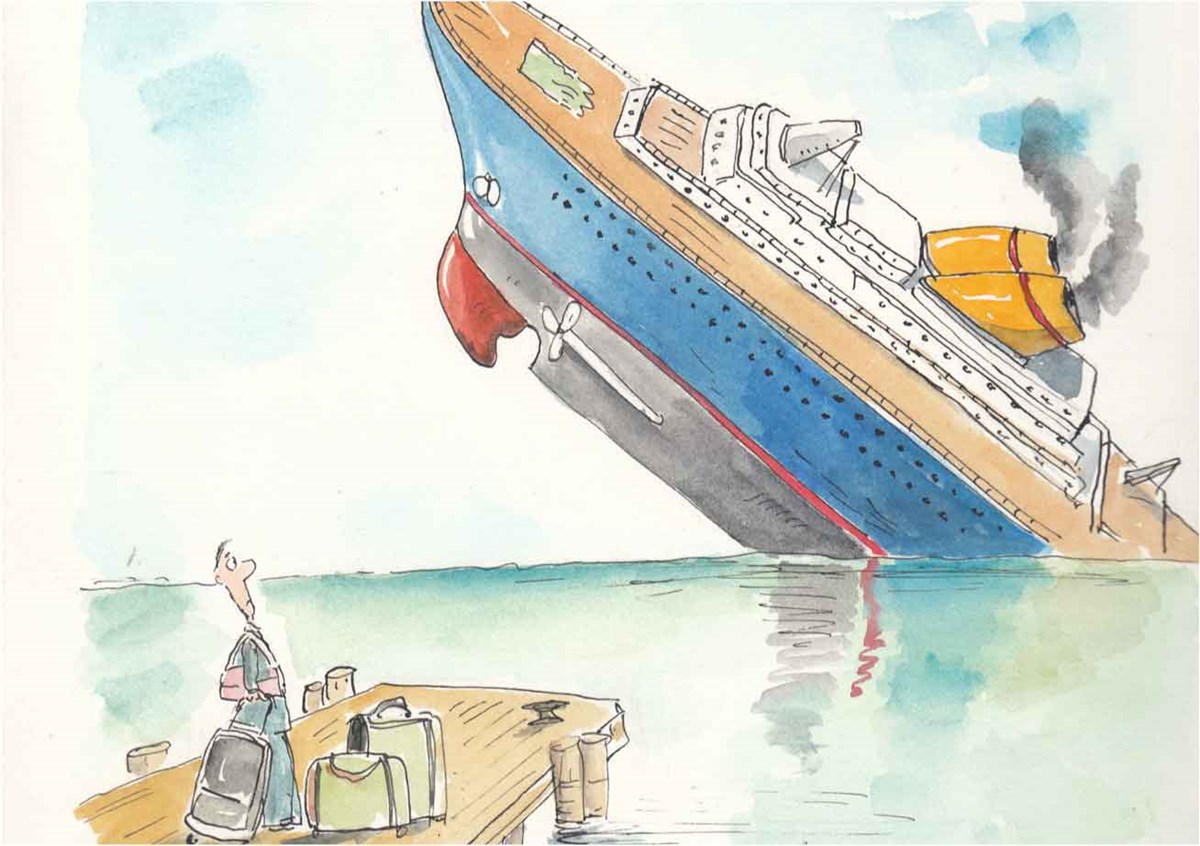 In 19th Century Bristol, England, wives of sailors shopped on credit, with local merchants while their husbands were at sea. Wives promised to settle accounts when husbands returned to port: “I’ll pay you when my ship comes in.”

Today, we use this cliché for anticipation of future wealth and success.

But it’s always good to have a back-up plan because sometimes your ship is the Titanic, which will, of course, give you that sinking feeling.

The Elephant in the Room

A question, issue, problem or decision too big and too obvious to ignore.

We are reluctant to confront this pushy pachyderm because it will cause embarrassment or arguments. 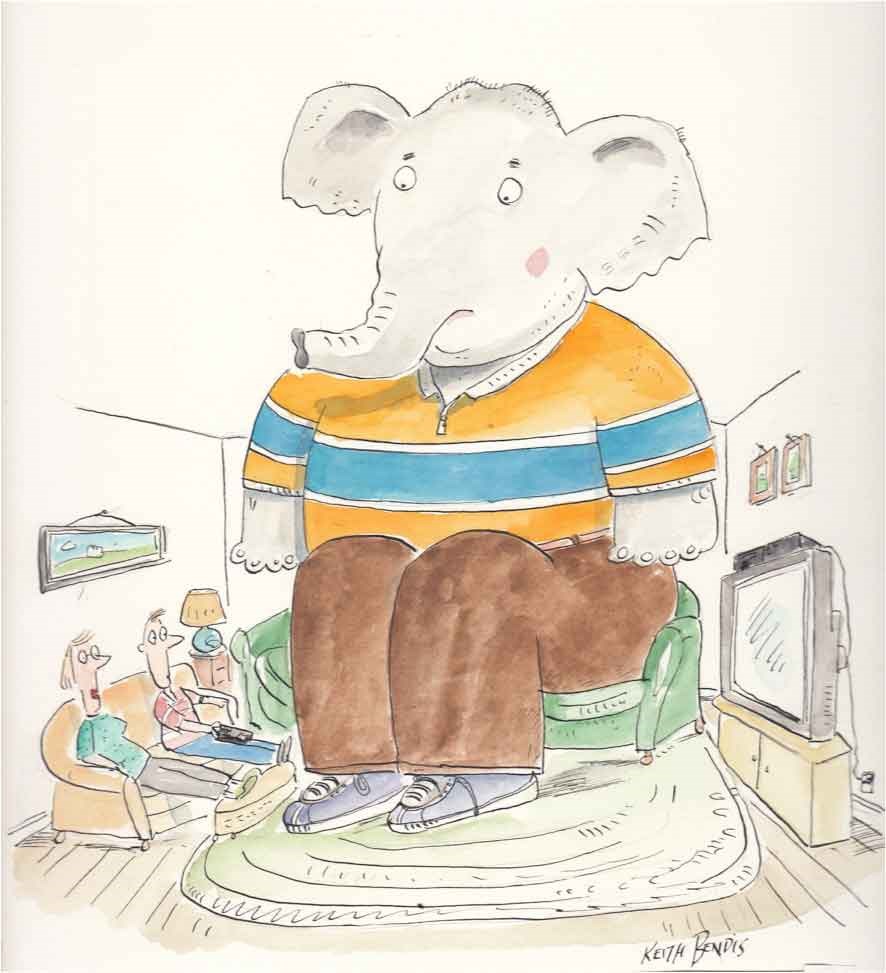 Nevertheless, it commands the room. Avoidance only delays the inevitable.

The issue is not going away because an elephant never forgets.

Too Big To Fail

When the U.S. financial system was about to collapse, the government spent hundreds of billions of tax payer dollars to bail out the likes of Goldman Sachs, J.P. Morgan Chase, Morgan Stanley and Citigroup. Because their tentacles extended to every facet of the economy, they were deemed too big to fail. 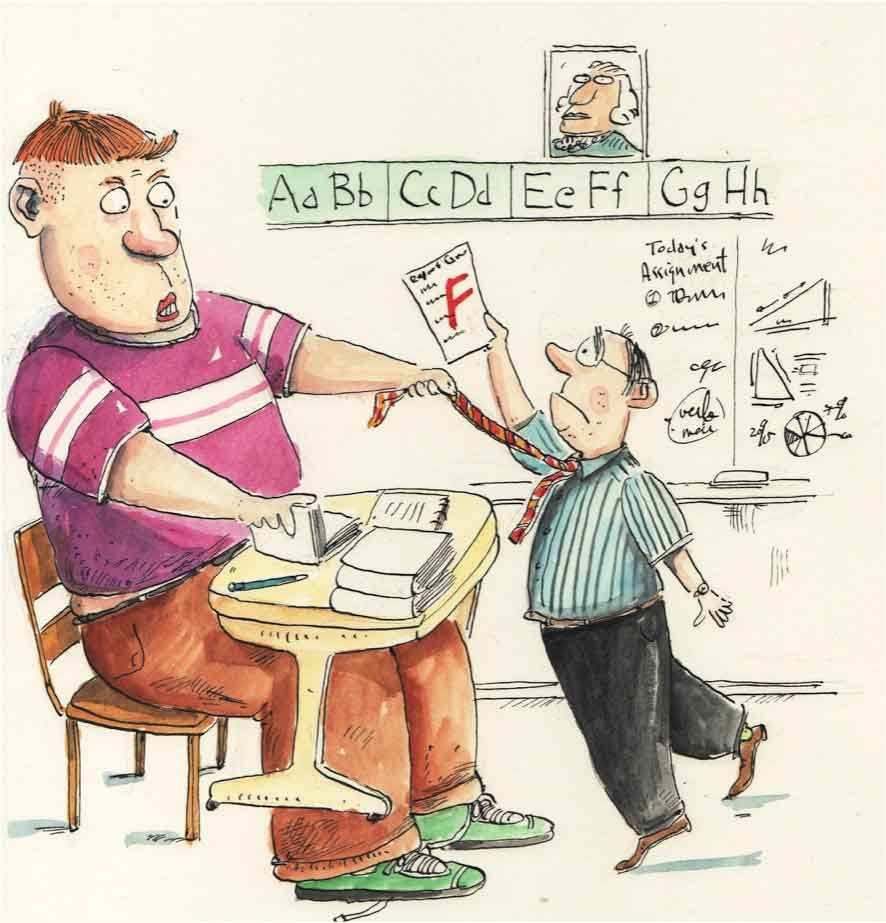 You might think that if something (or someone) is too big to fail, they’re TOO BIG! And you’d be correct. But that’s a discussion for another day.

When the mortgage market crashed, sharks were circling because they smelled blood in the water.

Secretary of the Treasury Henry Paulson was between a rock and a hard place in search of a win-win. Getting his ducks in a row, he primed the pump to give almost all of the financial institutions the cash infusion they needed to survive.

But at the end of the day, Lehman Brothers had to bite the bullet and was thrown under the bus. They were big alright, but apparently not too big to fail.

Some of these clichés may be too big to fail, but we are trying to put a dent in the universe, to end the limit the overuse of corporate cliché. It may be a moonshot, we know, but it may just change the world moving forward.