Can You Really Change Other People?

No matter your role at work and in life, your success is dependent, at least in part, on the success of those around you. In many situations, it would be great for you if people changed for the better. Just about all of the time, though, it would be better for them too.

“You can’t change other people, you can only change yourself.”

It’s a truism. Only it’s not true.

I know this—with 100% certainty—because it’s my job to change other people. As an executive coach for CEOs and senior leaders in organizations of all sizes, my success depends on it.

Helping others change and improve, when it’s hard, and when they may not want to (at first) can look and feel like magic, but it’s not. It’s a skill—a set of repeatable steps—that I’ve studied, developed, and honed over 30 years of practice.

Over years of doing this work, I discovered something wonderful: The C-suite leaders I work with reported that not only are they more effective at their jobs, and not only are their employees stepping up and becoming leaders in their own right, but their personal lives are easier and more satisfying as well. They stopped fighting with, and micromanaging, their kids. They had more empowering conversations with their spouses. And they found themselves helping others dig out of ruts that were sometimes decades in the making.

And you can have that skill too. Which is important, because we all need the skill. No matter your role at work and in life, your success is dependent, at least in part, on the success of those around you. In many situations, it would be great for you if people changed for the better. Just about all of the time, though, it would be better for them too. An employee who’s more capable than they realize, who could be taking on bigger projects. A bright colleague who, if only they spoke up and shared their perspective, could have a positive impact on the team and, consequently, their success in the company. A boss whose visionary strategy would finally get traction if they focused more, resisting the distraction of bright shiny objects.

For many of us, helping people change is not just a nice-to-have skill, it’s crucial. If you’re a leader or manager in an organization, it’s your job to change others. To transform squabbling coworkers into a capable team. To turn excuse-makers into responsibility-takers. To help high-potential contributors overcome dysfunctional habits and achieve their potential.

Changing others is perhaps the most important capability a leader can develop.

No matter your role at work and in life, your success is dependent, at least in part, on the success of those around you.

And yet it’s a capability that most people lack. We avoid difficult conversations, or handle them in ways that make things worse. We generate resistance rather than change. We point out how we want people to improve, but we lack the skills to get them there. We try to help and end up doing their work for them, making them dependent on us— when we should be helping them grow their independent capability. When emotions run high, we can even damage those relationships.

We feel stuck between a rock and a hard place: Caring too much to keep our mouths shut, yet regretting the ineffective and hurtful things we say. If only there were a third option.

Let’s banish the pain that comes from trying to change others in frustrated, angry ways—complaining, attacking, and manipulating them to get them to act differently. Those tactics cause tremendous damage. They don’t feel good to anyone involved. And they don’t work.

The Four Steps do work. And they heal relationships as people become allies instead of enemies, choosing skillful support over clumsy, destructive criticism.

Here’s a brief description of each step, along with a one-word description to make it easy to remember.

Step 1: Shift from Critic to Ally (Ally) This is the magic move. It gets you to the place where your conversation partner agrees to receive your help. You’ll learn how to initiate conversations that help others change. Even better, you’ll learn to recognize and capitalize on “silver platter” opportunities, times when people come to you already open to you helping them change—everyday opportunities that are easy to spot once you know what to look for.

Start with this step and you’ll move quickly past any potential resistance, well positioned as a trusted guide to help them to change.

Step 2: Identify an Energizing Outcome (Outcome) This step shifts your partner from focusing on the problem to focusing on the outcome they want. It’s a deceptively simple reorientation that moves people from frustration to excitement. For many years I didn’t think this was such a big deal, but my clients tell me focusing on the desired outcome is not an obvious thing to do when they’re mired in a difficult situation. It reliably gives them the right focus, exposing new and creative ways forward.

Step 3: Find the Hidden Opportunity (Opportunity) Here you return to the problem, but now you use it as an opportunity to achieve the outcome in a creative or unexpected way. Here’s where you can help people change so that they not only get out of the mess they’re in, but emerge at a whole new level of functioning.

Step 4: Create a Level-10 Plan (Plan) In the final step you help your partner generate, refine, and commit to a specific action plan to achieve their energizing outcome. You’re going for a “Level-10” plan, where they know exactly what they’re going to do, and are confident they can do it. This final step turns insight into action; intentions into impact.

Don’t be in a rush for someone to change. As psychotherapist Fritz Perls said, “Don’t push the river; it flows by itself.” People move and change in their own time. That said, you can influence their timeline in either direction: Pushing too hard will slow them down by generating resistance or stopping them outright. And creating the conditions in which they feel safe enough to challenge their own status quo will encourage their forward momentum.

If someone is about to do immediate harm to themselves or someone else , then acting with urgency is the exact right thing to do. But in most cases, there’s no immediate danger and when you act as though there is, it’s a sign that their issue has triggered one of yours. What’s appropriate here is to stand down. When it’s about you, and not them—they’ll know it and you’ll stop being effective.

At that point, take a breath and give yourself a timeout. There’s always tomorrow.

Their change is about them. It has to be their choice. Your patience creates the space for them to choose. Remember, people don’t resist change, they resist being changed.

You have in your hands the power to make a difference. Given how goodness and kindness and generosity have a way of rippling out in unknowable ways, it’s impossible to know how big a difference. But one thing’s for sure: In changing your world, you’re changing the world.

Excerpted with permission of the publisher, Wiley, from You Can Change Other People by Peter Bregman and Howie Jacobson.
Copyright (c) 2021 by Bregman Partners, Inc. All rights reserved. This book is available at all bookstores and online booksellers.

Peter Bregman is CEO of Bregman Partners and recognized as the #1 executive coach by Leading Global Coaches. He leads the Bregman Leadership Coach Training and the Bregman Leadership Intensive, ranked the #1 leadership development program by Global Gurus. He is the bestselling author of five books, including Leading with Emotional Courage and 18 Minutes, a Wall Street Journal bestseller.

Howie Jacobson, PhD, is Director of Coaching at Bregman Partners and Head Coach at the Healthy Minds Initiative. He is the host of the Plant Yourself podcast and contributing author of the New York Times bestseller Whole. 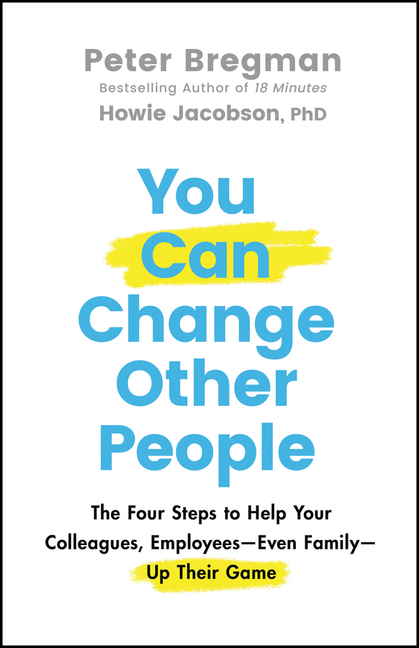 You Can Change Other People: The Four Steps to Help Your Colleagues, Employees--Even Family--Up Their Game