Why DEI? A Personal and Historical Perspective

People want to believe the American dream invites everyone to aim high, but the reality is that the mob awaited African Americans who dreamed too big. … Many of these instances of violence flared up against people like my great-great-grandfather, who committed no crime other than being industrious. 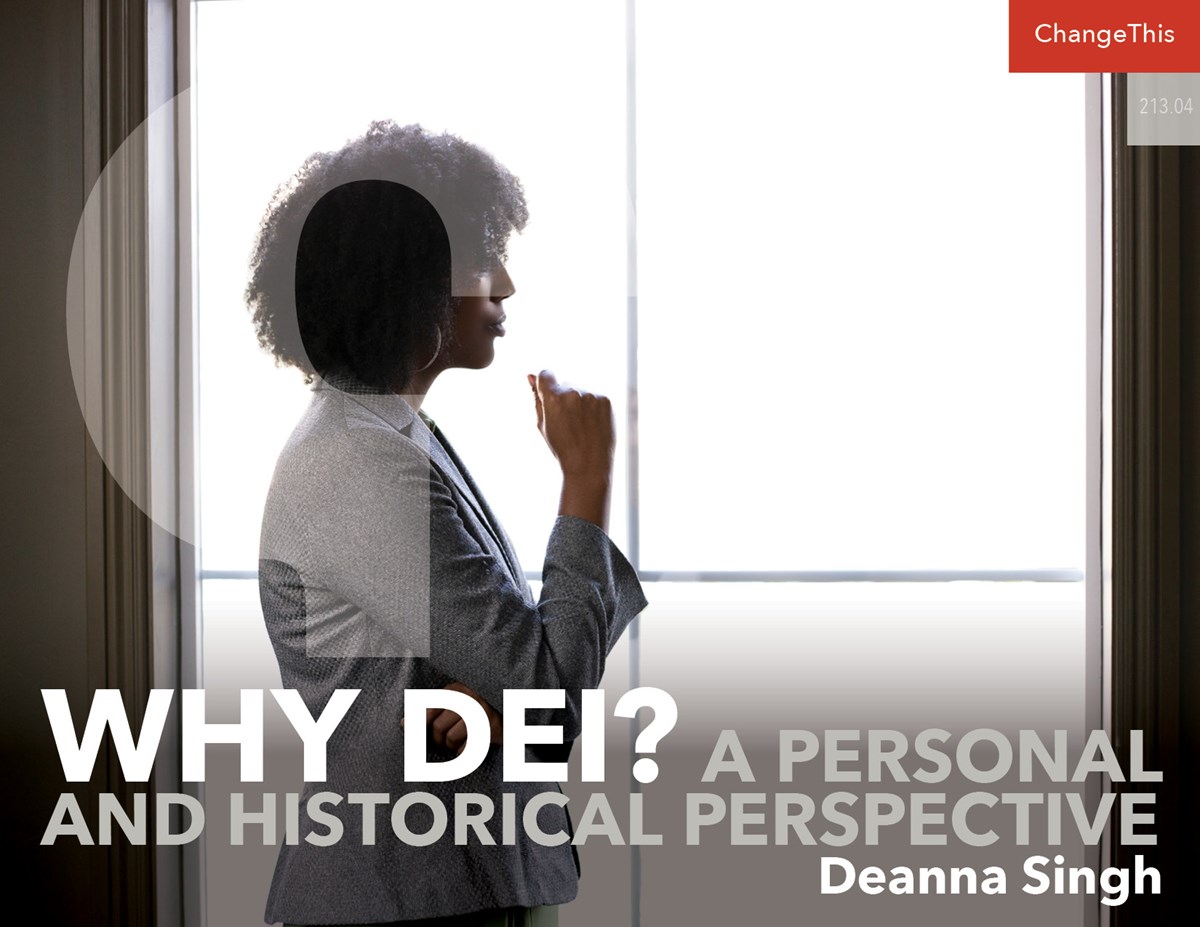 When I told my great-uncle Buck that I wanted to write this book, he smiled. But when I explained I wanted to explore strategies for overcoming inequality in the workplace, his smile faded. He questioned whether I was sure I wanted to look at how racism cut people down. When I asked what he meant, he took a deep sigh and told me this story.

After the end of slavery, my great-great-grandfather—his grandfather—started farming for himself in South Carolina. After a while, he figured out how to sell cotton for a profit and became the biggest seller to the county’s Black community. Someone recommended he sell to Whites, but he knew conducting business across the color line was dangerous. Seeking to grow but wanting protections, he hatched a plan. He’d plant, cultivate, and harvest the product before giving it to a White man he’d hired to sell to customers who’d buy only from someone who looked like them. But once news spread about his arrangement, the town’s White people retaliated.

My uncle Buck didn’t provide many details about what happened next. Struggling to make sense of the gaps he left in the story, my mind fills in the blanks.

Sitting at Uncle Buck’s kitchen table … I could see how this story still haunted him.

It imagines a mob of White men breaking into my great-great-grandfather’s house in the middle of the night, wrenching him from his bed, and dragging him out into the night. In front of his family, they beat him within an inch of his life and tie a noose around his neck. On the property he had the audacity to buy with the fruits of the labor he thought were his, they hang him from a tree. I don’t know if my great-uncle looked up at the body of his patriarch. All he said was his father figure was lynched for being entrepreneurial.

Before the moment Uncle Buck told me this story, we had known each other for thirty-seven years, and in all that time, he never even mentioned it. As far as I can tell, this is a tale only a few in my family have heard, because no one talks about it. In fact, the only reason Uncle Buck broke his silence was to warn me. There was no justice for my great-great-grandfather, and sitting at Uncle Buck’s kitchen table, watching his gaze seem to peer through the wall, I could see how this story still haunted him.

Wanting to encourage him, I said he had made his grandfather proud. That little boy had been there and seen what happened to Black people who tried to create a profession, but he persevered. He had gone on to college, got a job with the government, and achieved extraordinary leadership positions, especially for a Black man in his time. Meeting my eyes, he said he might have attained what this country would call success, accomplished things his grandfather never could, and achieved things that whips, pyres, and nooses tried to keep Black people from doing. Still, every step of the way—every exam he completed, every job promotion he earned, every directive he gave an employee, every day he showed up for work—he feared the mob was always waiting outside his office with a new rope.

HISTORY THAT STILL HAUNTS US

When I tell this story, most shake their heads in disbelief. When I tell it to Black professionals, however, most nod their heads in recognition. The former group feels shock, but the latter matches this story with ones from their family history marked with racial violence. Stories of an enterprising ancestor who faced a mob or of an ambitious grandparent cut down by terrorists isn’t new to them. Every time they enter their place of business, some feel the suspicion that everything they’ve achieved could be snatched away in an instant just like it was for so many and continues to be for many more.

People want to believe the American dream invites everyone to aim high, but the reality is that the mob awaited African Americans who dreamed too big. Between 1882 and 1968, on average, a Black person was beaten, whipped, burned, hanged, and dismembered by a mob every nine days. Many of these instances of violence flared up against people like my great-great-grandfather, who committed no crime other than being industrious. For every great-great-grandfather that hung from a tree, there was an Uncle Buck who remained traumatized no matter how far they advanced. And for every Uncle Buck who advanced, there were countless others who learned that if they wished to survive, they shouldn’t try at all.

Every day he showed up for work—he feared the mob was always waiting outside his office with a new rope.

Twenty-first-century Black Americans working in the United States do so in the historical shadow of COLORED ONLY signs and photographs of smiling couples pointing up at bodies in the trees. Every time they hear another racist joke, witness another example of false equivalence, or read a coworker’s insensitive social media post, they remember that any advancements Black people have made in the professional world have always teetered on the brink. Whenever they look at the roster of team photographs on a prospective employer’s website and don’t see a single face that looks like theirs, they have to garner the bravery to even interview for an organization where they’ll be the only Black person in a sea of White people.

Numerous studies catalog the enormous toll this reality takes on Black professionals. When people belong to groups that have been persecuted, they receive innumerable little reminders of how dangerous their position is, producing a kind of anxiety that can alter their physiology. Constantly responding to the threat of being outnumbered, threatened, or unwelcome, they can experience damage on a cellular level. Racism kills through beatings, murders, and lynchings but also through RNA inflammation, hypertension, and stress. No matter how much they achieve, many resemble my uncle Buck and fear the mob is in the next conference room. Even if there is no horde trying to kill them, the historically justified fear that there might be is enough to become the thing that does. In short, the workplace is harmful to underrepresented employees, and organizations need to develop policies that acknowledge this reality. By bravely confronting the past and understanding the present, diversity, equity, and inclusion (DEI) can provide strategies that can make a better future for everyone.

Deanna Singh is the Founder and Chief Change Agent of Flying Elephant, an umbrella organization for four social ventures. Through their work in the spheres of DEI, healthcare, children’s literature, and leadership, these four companies aim to shift power to marginalized communities. Deanna is an accomplished author, educator, business leader, and social justice champion who speaks to over 50,000 people annually, giving audiences the tools and courage to imagine, activate, and impact the world as agents of change. She has been recognized by the Milwaukee Business Journal as one of the community’s most influential 40 Under 40 Leaders, the State of Wisconsin as a “Women Who Inspires,” and by Forbes as an “African American Woman Everyone Should Know.” She recently published a book with American Girl, entitled, A Smart Girl’s Guide: Race & Inclusion. To learn more, check out Singh’s TEDx Talk “We All Have the Power to Build Bridges.” 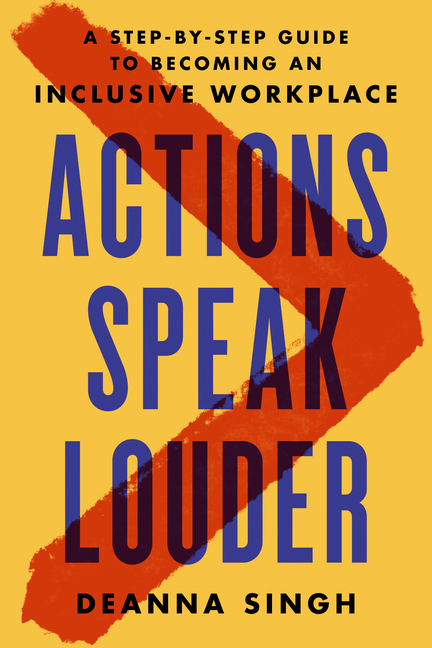