The following story shares how one creative hustler, Bryant Terry, exemplifies the power of knowing and engaging the people around you. He demonstrate how relationships are essential to maximizing your creative hustle. 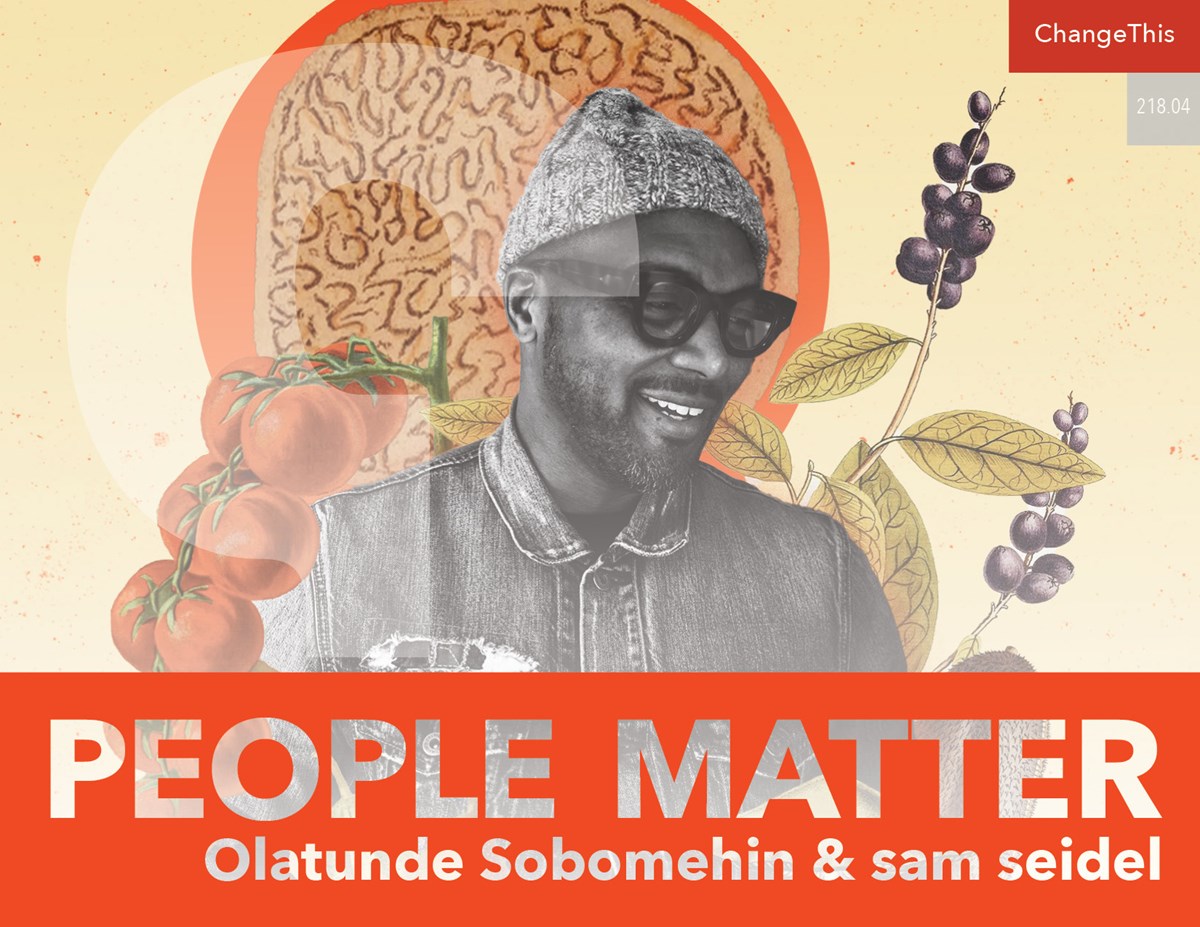 To be fully alive is to find purpose in the lowest lows and the highest highs.

A beautiful example of the power of community is an activity we lead with our students. We learned about the Reciprocity Ring from our colleague Meenu Singh, but it originates from the Trobriand Islands, where the Kula Ring was practiced as a form of ritualized gift exchange. The Reciprocity Ring invites each person to write out a request. This could be anything—whimsical or momentous, personal or professional. Our students have written everything from “Connect with more females of color on campus” to “Learn how to start a B corp” to “Travel to a tropical rain forest.” Then everyone posts their requests on a wall. For ten minutes, we all circulate, absorbing each other’s dreams and adding notes to any with which we might be able to help.

A student who requested a business mentor got offers from two students who play that role regularly. A photographer and a singer both seeking encouragement in their artistic endeavors agreed to meet up to support one another (they told us later that they did and it was great!). One student wrote, “Make connections in the athletic footwear or apparel industry.” This led to an introduction to the former creative director of the Jordan Brand.

As our students reflected on the activity, several noted that finding ways to be helpful with other peoples’ requests was fun; the harder part was voicing their own requests. Asking for help can feel awkward, but when we do it, amazing possibilities open up. In their book Who Not How, Dan Sullivan and Dr. Benjamin Hardy observe:

It is actually impossible not to attract incredible [people] once your vision is defined and expressed. There is endless talent and skill—endless resources—waiting to be directed to your clearly and powerfully expressed goals. People are attracted to purpose and are looking for something meaningful to be a part of.

There’s also a less commonly celebrated aspect of how people around us can spur our creative hustle forward: healthy competition. In his book Creative Quest, Questlove tells a story about being in the studio with fellow artists D’Angelo, J Dilla, and DJ Premier. Premier suggested that everyone play the songs they were working on. When Questlove noticed that heads didn’t bop quite the same for his song as they did for the others, he went back into the studio “with a vengeance” to rework the track. He wrote, “The motivation was competition, plain and simple. I didn’t care if that song sold fifty million copies … I wanted to impress the room.”

In his book Hustle Harder, Hustle Smarter, 50 Cent describes using rapper Black Rob’s song “Woah” as creative competition. Whether or not we’re in the room with our idols and rivals, healthy competition can be the energetic boost we need to advance our creative hustle.

Families—the ones you’re born into and the ones you choose—are also people to turn to as you’re working to bring your gifts to the world. Family helps develop your wisdom and courage. Not just living relations, but the ancestors whose influences you have inherited and your chosen family—the people you decide to embrace as siblings, cousins, aunties, uncles, parents, and children.

The following story shares how one creative hustler, Bryant Terry, exemplifies the power of knowing and engaging the people around you. He demonstrate how relationships are essential to maximizing your creative hustle. As you read his story, consider how it resonates or conflicts with the ways in which you have built your own team and community.

Community helps us grow through the vulnerabilities of life and gives us cause for celebrations.

When Bryant Terry told his classmates at the Natural Gourmet Institute for Health and Culinary Arts in Manhattan that he was there not to train to be a chef at an acclaimed restaurant, but rather to use cooking as a tool to educate young people from marginalized communities about health, food, and the environment, one of his classmates literally laughed out loud at him.

Bryant was serious though.

Growing up as a Black person in Memphis, Tennessee—the heart of the southern United States—Bryant was proud of the diasporic culinary traditions of African American cuisine. But he also saw how what was celebrated and spread beyond the South as “Black food” was only a small fraction of what his family actually ate. His grandparents’ diet was largely vegetable-centered and locally grown. Fried foods and heavy amounts of butter might be used on special occasions, but for the most part, they ate healthfully, directly from the land.

Inspired by what he learned about planting and growing food and herbs from his grandparents, Bryant has made growing vegetables a staple at every stage of his career. But crops aren’t the only things he cultivates. Throughout his career, Bryant has cultivated his crew—the people with whom he surrounds himself. This constellation of friends and collaborators has helped Bryant carve his unique path through the worlds of social justice, food, environment, and media.

In 2003, after graduating from the Natural Gourmet Institute, Bryant founded b-healthy!, a program at a multi-service youth center in lower Manhattan that taught young people about the personal and political dynamics surrounding what they ate. Students learned about the food apartheid present in historically marginalized communities across the country and how to prepare affordable and healthy meals. That same year, he received a fellowship to support the work of b.healthy!, which allowed him to expand programming to include a project aimed at raising the food IQ of young moms. This gave Bryant a taste of the power of his approach to changing people’s food habits, attitudes, and politics. And yet he knew so many more people needed to receive these messages. He could see the noble path ahead if he stayed at b-healthy!: constant grant writing and fundraising to continue to provide programming for cohorts of students. Yet he had an ambitious appetite for impact—to reach far more people than he would ever be able to at b-healthy!—and creative aspirations to write, make films, and weave music and food and stories together. He wanted to continue to grow his impact and himself. But how?

Sometimes the wisest thing you can do is to admit that you don’t know the answer. Bryant was humble enough to confess that he wasn’t sure what his next step should be. There were so many possible paths, each with its share of barriers. But Bryant had another super-power besides his humility: his friends.

Sometimes the wisest thing you can do is to admit that you don’t know the answer.

From his childhood in Memphis to his undergraduate studies in New Orleans to his graduate school and chef training in New York, Bryant had met an eclectic and accomplished group of friends, mentors, and collaborators. Not only was this a badass group of folks, many of whom were recognized as leaders in their fields, but they also knew Bryant. Over the years, through class discussions, late-night conversations, and grant proposals, Bryant had come to know these folks well, and they had come to know the gifts, challenges, and idiosyncrasies that made Bryant Bryant. He realized that his best shot at answering the question that stood between him and the next chapters of his creative hustle (essentially “What should I do next?”) was to bring this group together and focus their collective brilliance on it. And he had a secret weapon: his skills in the kitchen.

Bryant hatched a plan he called “Brainstorming Bryant.” He curated a group of personal advisors, almost like the board that an organization or corporation would form, and invited them to spend a full day working on a project: help Bryant figure out what to do next. The invitees loved Bryant and probably would have cleared their calendar to show up no matter what, but to sweeten the invitation, he promised to cook a feast for anyone who would attend. They all came.

Bryant roped in a friend who is a professional facilitator, and they cocreated an agenda for the day. He presented what he had done up to that point. He shared what he saw as his gifts. He asked his advisors what they saw as his gifts. He asked them how they saw him making an impact in the coming years. And he invited them to critique and build on each other’s ideas. By the end of the day, the group had painted a picture of Bryant’s next steps. It was an ambitious vision of Bryant influencing the world as a preeminent public intellectual at the intersections of food, health, and Black culture. The amazing part about this vision: it is exactly what Bryant has become.

Nearly two decades after Bryant voiced his goal to use cooking to change the world, he has founded a nonprofit, published six books, become the chef-in-residence at the Museum of the African Diaspora in San Francisco, and, along the way, got married, had two children, and won James Beard and NAACP Image Awards. In 2021, Bryant founded a book publishing imprint called 4 Color Books (with our publisher, Ten Speed Press). As editor-in-chief, Bryant will be able to spread his mission even further by collaborating with authors, artists, and activists of color to craft “visually stunning nonfiction books that inspire readers and give rise to a more healthy, just, and sustainable world for all.”

Nothing could be more Bryant. And he couldn’t have gotten here without his people.

Adapted from Creative Hustle: Blaze Your Own Path and Make Work That Matters by Olatunde Sobomehin and sam seidel.
Copyright © 2022 The Board of Trustees of the Leland Stanford Junior University on behalf of Hasso Plattner Institute of Design
All rights reserved.

sam seidel is the director of strategy and research at the Stanford d.school’s K12 Lab and the author of Hip Hop Genius: Remixing High School Education.

Olatunde Sobomehin is CEO/co-founder of StreetCode Academy, a nonprofit that offers free tech classes to communities of color. He has taught classes at the Stanford Haas Center and the d.school.

Together, sam and Olatunde embody creative hustle and share their wisdom as co-teachers of the Creative Hustle course at Stanford University.

The Hasso Plattner Institute of Design, known as the d.school, was founded at Stanford University in 2005. Each year, students from all disciplines attend classes and programs to learn how the thinking behind design can enrich their own work and creativity. 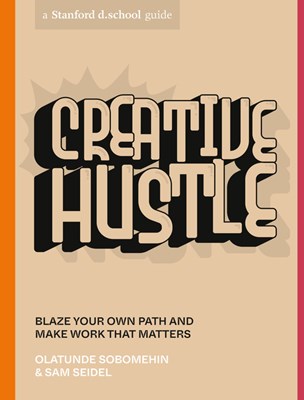 Creative Hustle: Blaze Your Own Path and Make Work That Matters