Accountable: The Rise of Citizen Capitalism

Michael O'Leary and Warren Valdmanis show that it is not even in investors' interests to have such a focus on short-term profits, to allow a system that is currently creating so much inequality, releasing so much carbon into the air, failing too many people. 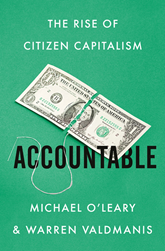 There is one thing I follow as closely as I follow books: basketball. Before the pandemic, I played the game at least once a week with friends, fellow parents, and staff at my kids’ school, and if I don’t have my nose in a book during basketball season, I am probably watching whatever game is on television, or following the play-by-play action of games on my phone.

And one thing I love more than the game right now is the decision by players not to play it on Wednesday night. It was a movement led by our hometown Milwaukee Bucks that quickly spread across the entire sports world. It came after the latest instance of a police-involved shooting, which occurred just 45 minutes down the freeway from where the Bucks play their home games in normal times. But, as we’re reminded everywhere we turn, these are not normal times. The abnormality of our times, however, opens up a window into the injustices and outright absurdities that continue to be unaddressed, even accepted as “normal” before all this.

So much of what ails our country—and so much of the inequality and inequity in our country’s existence laid bare by this pandemic—comes from an imbalance of economic power. As athletes demonstrated this week, that imbalance only exists as long as they, and we, allow it to. Because without them, there is no game to play. Without them, the nearly $10 billion generated by them playing the game every year doesn’t exist. With them, and with their voices raised, the corporations they play for can help make the cities they live in a better place, not just by existing within them, but by making real investments in the community and its people, by being accountable to its people.

As Michael O'Leary and Warren Valdmanis discuss in the introduction to their new book, the United States is unique in history in having been a country literally founded by corporations—specifically ”The Massachusetts Bay Company and the Virginia Company, both for-profit ventures before becoming political colonies.”

Half the passengers on the Mayflower were not Pilgrim church members but were conscripted by investors.

The companies that founded America may not have survived, but the most important and influential organizations in America and the world today are, almost inarguably, large corporations. They are, at the very least, the ones most present in our everyday lives. More than the dictates of any government body, how we spend our days most often comes down to how we’re spending our time and money—and the majority of our time and money is spent with at least one corporate entity. Indeed, even when we aren’t interacting with them or the products they make, the devices we carry in our pockets allow them to keep tabs on us at all times.

How our economic activity is organized, and how its benefits are distributed, has ebbed and flowed over the years, but for the past four decades, it has been geared primarily towards the interests of investors. It is a system based on what the authors call “fiduciary absolutism,” which is “a distorted and extreme version of fiduciary duty that binds corporate leaders to chasing short-term profit.” Consider these facts alone:

CEOs’ pay has increased by 940 percent since 1978 while S&P companies spent the last decade buying back $4 trillion of their stock—$4 trillion that could have been invested in the workforce.

And for as many things as we've done right, and built up, our economic history is filled with facts that echo such shortsightedness:

This is a country built off tobacco and slaves, fossil fuels and global finance. Corporations had legal personhood before women did.

None of those realities was or is sustainable long-term. What O'Leary and Valdmanis show clearly is that it is not even in investors interests to have the short-term focus that allowed such realities to take root in the first place, to allow a system that is currently creating so much inequality, releasing so much carbon into the air, failing too many people.

What they know is:

Rebuilding trust in our economy requires taking meaningful action. People won’t be fooled time and again. Empty talk will be revealed for what it is, and it will breed even more cynicism when it’s not backed up with action.

Donald J. Trump said of the NBA that "They’ve become like a political organization, and that’s not a good thing." The idea of entertainers and celebrities taking an honest stand on political matters still rubs a lot of people the wrong way, even after we’ve seen a reality television host rise to the presidency by staking out and giving louder voice to some of the most extreme (and extremely dishonest) political positions in our country, like the birtherism of our first African American president, or Qanon conspiracy theorists.

It also belies the fact that sports leagues, in general, have for decades been using their economic influence to blackmail the cities they exist in to raise taxes on their citizens to build publicly-financed stadiums so they could keep even more of the profits made rather than investing them back into the team and the city. How is that not political activity? It seems to me that the change that players are demanding is a much more reasonable one, one that will help protect citizens of the communities they play in—and the communities they come from—rather than take money out of their pockets. And if we’re talking about mixing politics and sports, it is worth mentioning that the president recently tried to use his political power and the State Department of the United States to ask representatives of the British government if they would help relocate the British Open golf tournament to the Trump Turnberry resort in Scotland.

What NBA players did this week was use their economic power to bring renewed attention to the issue of police brutality in this country, and demand action. They put their own financial interests on the line, and at risk. But without the players, there is no game, and without the game, there is no business to be built around it, and without that business, there are none of the outsized benefits of the game being played flowing to owners or investors. And even though we do not know exactly what comes next, what we do know is that, so far, the owners are coming out in support of the players actions. The adversarial mindset that usually exists in the economic arrangement seems at this moment, with regards to this issue, to be sidelined—issues of social change put at center court, spelled out literally on the court: BLACK LIVES MATTER. What they’re doing as players, and as a league, is commendable. The NBA is a player’s league, one I believe helps us see in many ways what Michael O'Leary and Warren Valdmanis’s idea of “citizen capitalism” might look like. 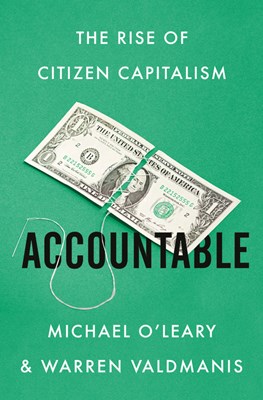 Accountable: The Rise of Citizen Capitalism