Acting with Power: Why We Are More Powerful Than We Believe

Deborah Gruenfeld teaches us how to understand and own the power we have, and to use it more consciously and with intent, so we use it in the service of others instead of defaulting to the instinct we all have to protect ourselves. 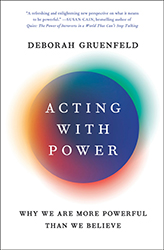 Acting with Power: Why We Are More Powerful Than We Believe by Deborah Gruenfeld, Currency

It has become so common for companies to use improv classes—in an effort to enhance creativity, communication, teamwork, leadership, and more—that Second City has a corporate education and professional services arm called The Second City Works. It has been around since the 1980s, and Harper Business put out a great book, Yes, And, from those who led the program a few years ago, so I doubt I’m telling you anything new. But Deborah Gruenfeld has flipped that on its head and invited actors and directors into her MBA classroom. Her class, Acting with Power, teaches how our behavior affects and reflects our status and power, and how “to move flexibly among different hierarchical roles.” It also teaches empathy, in part, by forcing students to play flawed characters (think Alec Baldwin in Glengarry Glen Ross) that put our insecurities, imperfections, and even ugliest traits on display. Most importantly, perhaps, it teaches them that we all have a role to play, and that what others usually need from us most, regardless of how we are feeling, is that we play that role well.

That is, in a real way, where our power comes from. It is about putting “responsibility ahead of dominance, and maturity ahead of authenticity.” That may sound uninspired, and can, in fact, feel inauthentic, unnatural, or even unsafe, but as Gruenfeld writes:

It is not a question of being yourself or trying to be someone else. It is a challenge of aligning your thoughts, feelings, and actions with your responsibilities to other people.

Other people. That is what power and leadership should be about. And if you want to maintain your power in the long term, it is what it has to be about. That is because power is not a personal trait you either have or you don’t, but a social phenomenon and construct, a part of the social contract. That is, “it lives and dies in the context.” You cannot be powerful on a desert island. Power depends on “the degree to which you are needed” by others, the degree to which you are useful to the group. And in that way, you are probably more powerful than you imagine, because more people need you than you know, because power is based on your connection to them rather than how dominant you are or seem to be. It is about existing in and understanding a shared reality, and playing your part in it as well as you possibly can. In that sense, power is not really about you, not about controlling a narrative and setting the course. As Gruenfeld writes: “Power is a part you play in someone else’s story.”

The notion that we have more power than we think is probably disconcerting. The idea that the roles and responsibilities that connect us to others might be a source of power, rather than a source of weakness or constraint, sounds practically un-American …

But the research bears it out. That does not mean we should become automatons, however, or that we need to stay in our place. Quite the opposite. It means that we need to explore all parts of ourselves, even those are most uncomfortable with, and even act on them. It means different things in different contexts. Sometimes it requires us to play our power up, to speak up for others even when we’re not sure we have the standing to do so, to speak truth to power. Sometimes it requires us to play our power down, to make room for and defer to others, to ask for help or make a joke at our own expense. The reason Gruenfeld brings actors into the classroom is because:

Like actors, we need to use more of ourselves—more heart, more guts, more clarity of purpose, and, importantly, more imagination—to play our roles effectively. Sometimes we need to to use less of ourselves too—far less, less shame, less “should.” Instead of wasting energy trying to hide the parts of ourselves we fear the most, or trying to appear “normal,” acting demands owning all of it, digging deeper, and having the courage to bring even the scariest parts to life.

In a sense, we are all acting already. We often tell people we’re doing good when we’re feeling anything but. We act with confidence to mask feelings of vulnerability, and are able to show more vulnerability when we’re feeling confident. And even when we actually attain more power, our insecurities come along with us; being powerful actually means they will attract greater attention and scrutiny. Having power over others actually makes us feel our own powerlessness more acutely. Ask any parent of a newborn. The stakes and expectations are actually raised, the spotlight brighter, the ways we can fail—ourselves and others—more consequential. Gruenfeld explains how her own modicum of power hasn’t alleviated her insecurities, but simply “provided a bigger stage on which to act them out.”

So, keep in mind, whatever power you may have is not for you. It is for others:

We seek power to the extent that we feel powerless. But actually having power, no matter how much, does little to alleviate powerless feelings. The sense of powerlessness that pervades our lives is not about power per se. It is an artifact of childhood, a survival instinct, and a response to the fact that we will not be here forever. In this one way, we are all powerless. The best way we can do this is to come to terms with this reality and focus on making a difference for others in the time that we have.

We are all worried about our families and communities, the places we work and the systems that govern us, and so much more at this moment. Before knowing where the world would be when the book comes out next Thursday, Deborah Gruenfeld wrote in Act in Power that “more people acting with more power can benefit society as a whole,” and that seems to undoubtedly be the case right now. How and to whom are you connected? What do they need from you right now? How can you step out of the fear that pervades the present moment and show love, hope, and generosity of spirit to others? This moment makes it more evident than most that power and leadership are best used in the service of others, in getting them what they need to (literally) survive, and in overcoming fear and division and enlisting everyone together to create the kind of world we all want to live.

To do that, we should turn away from the instinct to protect ourselves by lashing out and fighting battles with other people or other nations. We need to work on the battles we are having within ourselves. And that is why is is so useful that, while:

In Acting with Power, Deborah Gruenfeld teaches us how to understand and own the power we have, and to use it more consciously and with intent, so we don’t default to the instinct we all have to protect ourselves. And yes, we are obviously in a place where we now have to worry about protecting ourselves from a virus, but that is itself a group effort. So, if you can, do what’s best from the group, stay at home, and order the book online.