An Everyone Culture: Becoming a Deliberately Developmental Organization

Developmental psychologists Robert Kegan and Lisa Laskow Lahey show us how to build development organizations that bring our workers out of hiding. Robert Kegan and Lisa Laskow Lahey open their new book, An Everyone Culture, with what appears to be a Pandora’s box assertion that most people, in most organizations, are doing a second job they’re not getting paid for: hiding weaknesses and imperfections. It is so common that it goes largely unnoticed until you find those rare companies where people aren’t pulling that weight around behind them.

An organization that can pull that (weight) off, that can not only free their workers of the fear that accompanies being an continuously imperfect human being, but can offer an opportunity for personal development, will have a considerably more engaged, energized, and efficient workforce. Furthermore, it will be a more productive company. That is because, not only will workers not have to spend their time and energy hiding imperfections or managing others’ impressions, they will be actively improving on the job, which improves the overall organization. And, simply put, the best way for an organization to realize its full potential is by unleashing the previously untapped potential of its people. The authors call this kind of enterprise a deliberately developmental organization, or a DDO. And it is this kind of organization that closes the Pandora's box and circles the proverbial square.

Kegan and Lahey are developmental psychologists who have devoted their professional lives to “the study and advancement of adult-developmental theory, which illuminates the gradual evolution of people’s meaning-making systems and psychological capabilities.” The authors were at the forefront of research science that advanced the idea that, put colloquially, old dogs can learn new tricks—or that cognitive development continues well past adolescence and into adulthood. This was a somewhat controversial stance earlier in their career, until better instruments allowed (previously skeptical) brain scientists to discover neural plasticity and the “phenomenal capacities of the brain to keep adapting throughout life.”

Armed with that knowledge, the authors aim to change the way we think of developing our adult workforce. Speaking of the current paradigm of executive coaching, leadership development, and corporate retreats, the authors tell us they’re flawed because they consist of punctuated inputs rather than ongoing development, they “constitute something extra … outside the normal workflow” and are hard to transfer back into “the stubbornly durable context of business as usual,” and only apply to “high potential” employees, writing off 90 to 95 percent of workers. And then there’s this:

Finally, and above all, notice that the twentieth-century answer to developing potential, in all cases, makes the individual, and not the organization, the point of dynamic entry. If the organization wants to significantly impact people’s capabilities, it should apparently find something new, outside the organization itself, some additive: give them a coach, a program, a course, a mentor. The organization itself does not change. We might soup up the fuel through these additives, but the engine remains what it has always been.

What is the alternative? Imagine so valuing the importance of developing people’s capabilities that you design a culture that itself immersively sweeps every member of the organization into an ongoing developmental journey in the course of working every day.

What this requires is that leaders work on the culture every day, which is not a “soft” endeavor. It is, the authors tell us, “as much to enhance the business as its employees.” And it is hard work. The first chapter begins with a quote from Brené Brown, asking if you value “the experience of your own vulnerability and running right at it.” For most of us, the answer is a resounding no. (This ties back somewhat to the Editor’s Choice from two weeks ago, Erika Andersen’s Be Bad First, and the ability to set aside the emotional armor of our competence to learn something new.) But as the authors declare:

Everyone who has ever worked anywhere knows that work is intensely personal, with daily opportunities to experience pain, exhilaration, self-doubt, and meaning. We all bring our whole selves to work every day.

The issue is that, in most organizations, we’re required to hide some part of ourselves, required to look confident and competent rather than own up to our shortcomings and work on them. DDOs welcome the whole person, and because of that they are devoted to developing the whole person. So, when they are talking about development, they mean “not the development of a career, but the development of the person having the career.” Being academics, this is where they take a deep dive into theory. It is also where this review could easily get off track. So to keep it more succinct, I’ll focus on one aspect of it: happiness.

Although more and more companies are finally concerning themselves with worker happiness, most are taking their cue from the positive psychology movement and viewing happiness as a state, enhanced by “flexible work hours, pool tables and dart boards, and dining areas run by chefs serving fabulous and nutritious foods at all hours, frequent talks by visiting thought leaders, spaces for naps, unlimited vacation time.” The authors suggest we take the longer view of happiness as a process:

[T]he research literature on happiness suggests … happiness as a process of human flourishing. This definition, whose roots go back to Aristotle and the Greek’s concept of eudaemonia, includes an experience of meaning and engagement but in relation to the satisfactions of experiencing one’s own growth and unfolding, becoming more of the person one was meant to be, bringing more of oneself into the world.

To provide examples of application of the ideas in the real world, the book focuses on three deliberate development organizations—Next Jump, The Decurion Corporation, and Bridgewater Associates (who we met recently in Adam Grant’s Originals). The lessons from those companies combined with the theory of Kegan and Lahey provide an exciting portrait of what’s possible, and hopefully what’s coming, in the workplace.

There are two things I’ve come to believe strongly in over the past two years of almost obsessive reading and observation. The first is that, in an increasingly automated and digitized world, it is ironically our most fundamentally human qualities and psychology, and proactive development of both, that will make individuals and organizations most successful. Now that we have machines to do the machine-like work we used to do, we have to develop the empathy, intuition, and ability to learn anew about the world around us each day (which Kegan and Lahey call “The Self-Tranforming Mind”).

The second is that it behooves organizations to continually develop and engage their workforce. We hear a lot about the so-called skills gap (and according to James Bessen, Employers Aren’t Just Whining—the “Skills Gap” Is Real), but there is a long and great history dating back thousands of years—from traditional apprenticeships to vestibule training during the industrial revolution. Like R&D, worker training and development has largely been outsourced to educational institutions these days. Companies expect prospects to come to them fully formed. Businesses should begin to take back some of those educational and developmental responsibilities, and leaders should begin to think of themselves as much as teachers as managers. Those willing to put attention on, and resources behind, these efforts will shoot ahead of their competitors in worker productivity and retention.

And this benefits workers, too—not only because they will be happier and more engaged at work, but because they won’t have to move around in their career as much as has come to be expected. Because, as much as we hear that people just don’t expect to stay with one company all their life anymore, that’s not necessarily workers’ desire. They’re most often looking for better pay (something that can be countered by addressing what the authors call the “rise of new incomes,” which I’ll leave to you to discover), new opportunities (not necessary if you provide them), or simply a better place to hide. And if you bring your workers out of the shadows and let them shine, it will shine up the entire organization. 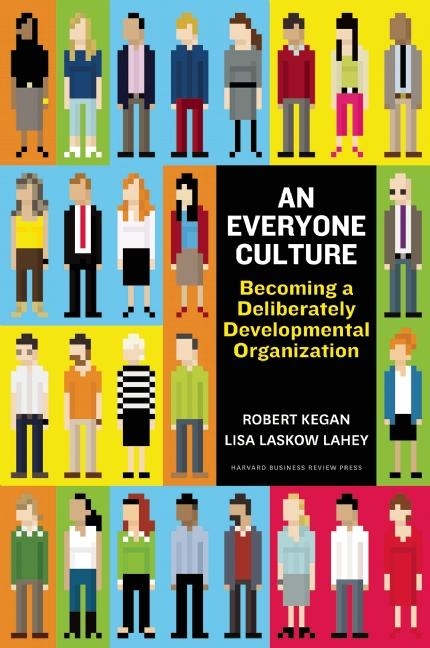 An Everyone Culture: Becoming a Deliberately Developmental Organization