Beautiful, Gruesome, and True: Artists at Work in the Face of War

Some of the most creative work comes out of the most difficult circumstances. This reality is borne out in Kaelen Wilson-Goldie's new book about the work artists are creating in the midst of violent conflicts around the world. 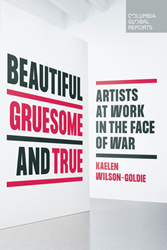 Beautiful, Gruesome, and True: Artists at Work in the Face of War by Kaelen Wilson-Goldie, Columbia Global Reports

Why? And to what effect? These are questions Kaelen Wilson-Goldie poses at the beginning of her new book, Beautiful, Gruesome, And True. The book offers a brief glimpse of the life and work of artists working in three places plagued by violent conflict—Teresa Margolles’s installations about the effects of the drug wars along the U.S./Mexico border, the anonymous Abounaddara collective that produced hundreds of films during the Syrian Civil War from 2010 to 2017, and Amar Kanwar’s films about the labor struggles, environmental degradation, and effects of extractive industries on tribal communities in rural India.

I found myself drawn to the book and these questions for multiple reasons. One, I am going to dig into almost any book that comes out of Columbia Global Reports, which I believe is one of the best ongoing projects in publishing. Two, I went to art school in a previous life, where I was immersed in art and art history long before I started reading about business and economic history here at Porchlight Book Company, so when reading about creativity and innovation, I find myself drawn to books about artists and the arts just as strongly as those in a business or organizational psychology context. Finally, the way in which artists make their work, make their living, and make an impact reflects the circumstances and work of others and the greater culture around them. It shapes the culture around them just as much as larger institutions and organizations—business, government, and otherwise.

One of the interesting aspects of Wilson-Goldie's examination is how:

Because Kanwar, Margolles, and Abounaddara are constantly negotiating on either side of their work—on one side, with institutions, to have their art shown under conditions they can live with, and on the other side, with collaborators and the subjects most affected by the violence around them, to get their work made—they have created a model for how to get hard things done, an example of how to work better collectively. None fit the mold of the heroic artist holed up alone in his or her studio.

That is notable because, from the Impressionists to the Beat Generation, Pop Art to Punk Music, the world has been changed by art movements, schools, or groups. And it isn’t relegated to influence in the arts alone. Perhaps the most influential economist of the 20th century, John Maynard Keynes, was a member of the Bloomsbury Group of intellectuals that included Virginia Woolf and E. M. Forster. But those profiled by Wilson-Goldie, like the diverse coalitions and leaderless movements popping up elsewhere in the public sphere, “do not represent a group or a school or a movement within the field of contemporary art.”

All of them are looking at situations of war, conflict, and violence and making works that are contemplative, orderly, and contained. But it cannot be said that they share an aesthetic. One would never mistake a film by Kanwar for a video by Margolles or Abounaddara. They have each developed a sensibility in their work that is distinct and dramatically different from one another. And on a personal level, they are not friends or colleagues, not even in the broadest sense. They have shown in some of the same exhibitions and won a number of the same prizes. But they are not close. They occupy places in the art world that are difficult to pin down. None of them are particularly comfortable being associated with the art world in the first place.

The art world does still exist to bring their work together in shared spaces. But how that world is funded and operates on a global scale has been exposed as wanting by artists like Nan Goldin, who has organized protests to remove the Sackler family name from the many prestigious museums it gave its OxyContin drug money to. It is also a world in which money is laundered and illicit profits are parked. But, like the corruption that has been exposed in FIFA or the International Olympic Committee, or the way tax dollars have been funneled to build stadiums for billionaire owners of American sports teams or provide tax subsidies for international conglomerates, that is a symptom of a current economic system tilted toward the already rich and powerful that seems to be fraying around the edges. And when you get down to the local level, you find people committed to their communities coming together to organize, document, and live life in different ways. As Wilson-Goldie writes:

What sets Kanwar, Margolles, and Abounaddara apart is how long each has spent at work in a single place, in response to a specific conflict, finding modes of enduring collectivity and lasting collaboration—and in doing so, slowing the pace of internet time by demanding more deliberate and methodical ways of thinking.

Artisans have been documenting human conflict since the beginning of history. Some of the earliest examples we have of art are depictions of war—even atrocities. From Mesoamerica to the Persian Empire, tales of conquest were inscribed in stone. Our earliest examples of written literature, the ancient world’s epic poems, as Wilson-Goldie notes, “dwelled at length on descriptions of war.” Other than during the short reign of Akhenaten, Egyptian Art changed little for millennia. And, yet, it tells us so much. The ways in which artists work today is just as informative—and potentially transformative. The work itself is as complicated and complex as the conflicts raging around them, and just as important to pay attention to.

Lorenzo Tondo looked at how the artists of Ukraine find their voice in a cry of resistance in an article for The Guardian back in April, in which Daryna Momot—”co-founder of Cittart, a Ukrainian organisation that helps fund and find shelter and resources for artists”—said the following: “Art helps us realize what we are going through. Art captures people’s experiences … This is important for the preservation of memory and its transmission through generations in its true form, as art is much more difficult to manipulate than to rewrite history.”

It is not always easy to face. As Momot later noted, “The horrific events that Ukrainians have encountered, through art, are now taking shape.” The horrific events that have occurred in the places profiled in Beautiful, Gruesome, and True have taken another shape through the work produced by the artists who live there. We should not look away. The power of art is that it beckons us to look. Why? And to what effect? As Wilson-Goldie sees it:

Short of actually changing the world, that might just be enough to make a difference. 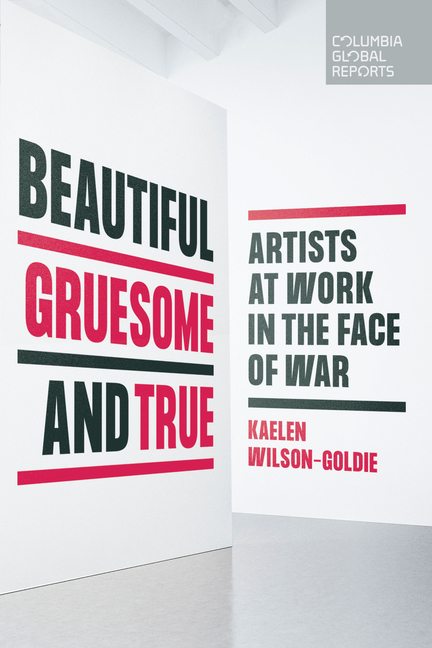 Beautiful, Gruesome, and True: Artists at Work in the Face of War