Beeronomics: How Beer Explains the World

Johan Swinnen & Devin Briski have written a history of the world through the lens of beer brewing and distribution.

We hail from a city synonymous with beer. Our major league baseball team is not only called the Brewers, the mascot of that team—Bernie Brewer—used to lead fans in cheering from a chalet perched atop a giant wooden keg, and would slide from said chalet into an equally giant mug of beer when a home run was hit. And though Bernie is now more kid-friendly, the crowd still rises to belt out the “Beer Barrel Polka” during the seventh inning stretch of every home game. The name of the field they play in? Miller Park, for the sole remaining giant brewer of the many that made Milwaukee famous.

Beer has been wrapped up in the story of civilization since it began. Before Charlemagne set rules establishing monasteries as the centers of brewing, many of which remain in production, brewing beer was largely a domestic affair. And being domestic, it was traditionally the domain of women. In fact, the oldest legal document we known of, The Babylonian Code of Hammurabi, contains four laws about beer, which “are all addressed to female pronouns.” (The oldest food law still in effect today is the Reinheitsgebot, or “German Beer Purity Law,” which has been on the books since 1487.) The Sumerian and Egyptian deities associated with brewing and taverns were also female. And, in the Epic of Gilgamesh, widely considered the oldest surviving work of literature, the priestess Shamhat civilizes the beast Enkidu (in part) by plying him with beer. In fact, it is in the lines immediately after he drinks seven jugs of beer that he “rubbed himself with oil, and turned into a human.” The epic poem centers around one of the first cities in human history, Uruk, the cradle of civilization, and marks a transition from a nomadic life and “extractive economy” to an agrarian one. And beer played a big role:

It’s also here that one of the world’s oldest beer recipes was found, recorded on a clay tablet and dating back to 6000 BC. Beer was more than a commodity—it was currency. Records show that people traded grain and beer for timbers, metals, and precious stones.

Though it has gone through many transformations, with production moving out of our homes and into factories—and still going strong in monasteries—it has remained at the center of our economic lives, and helps explain them. “Prior to the twelfth century,” the authors tell us, “monasteries were the only places that beer was brewed on anything close to a commercial (large) scale.” That changed when hops began to be more widely used. It happened first in Germany. Hamburg, which was devastated by a great fire in 1284, was rebuilt by a burgeoning middle class of brewers that focused on the export market, and used hops to better preserve their beer. The fire, as tragic as it was, allowed them to build facilities tailored to the process, and Hamburg became “The Brewing House of the Hanseatic League.” Medievalist Richard Unger at the University of British Columbia, whose focus on the era’s technology and trade quickly led him to the brewing industry (which he has since written two books, Beer in the Middle Ages and the Renaissance and A History of Brewing in Holland, on the topic) estimates that as much as half the city’s income came from exporting beer during the city’s heyday in the fourteenth century.

In the 1500s, as the use of hops spread across Europe, the first “golden age of brewing” occurred, production processes were improved, economies of scale began to develop, and the first wave of consolidation occurred in the beer industry. It would not be the last. Eventually, breweries got so big that “brewers were no longer craftsmen but industrialists.” When that happened, it was the balance book that mattered more than the recipe. For the first time, the authors remark, “the brewery’s clerk, rather than its brew master, was considered second in line for ownership.” Those owners built business empires and political dynasties, and the taxes collected from them helped build the British Empire. The story of beer’s tie to civilization, you see, is also a story of taxes on beer. The aforementioned Medievalist Unger has found records of taxing beer dating back 5,500 years. John Nye’s War, Wine, and Taxes ties such taxation to the more recent history of industrialization. In his book, he argues that “wine tariffs and beer taxes were the lynchpin of British mercantilist strategy.”

Their stated reasoning was to deprive Britain’s rival France of wealth, but their real power came from the strategic protection and taxation of a burgeoning oligopoly of London beer barons capitalizing on the industrial revolution. In effect, Parliament was able to fund its imperialist conquests overseas by price-gouging London’s growing urban proletariat on their post-work pints.

The next great leap in brewing took place in Munich and Pilsen, where the industrial revolution met the scientific, the process of bottom fermentation took hold, and beer production moved from craft to science. This led to an era of even more massive consolidation, and the number of breweries operating in every beer producing country plummeted as the largest breweries burgeoned to enormous size and beer production skyrocketed. This is also the era that the US, and our hometown of Milwaukee, begins to enter the picture, and it leads us into the present day of global conglomerates—as well as the craft counterrevolution.

Beeronomics has a little something for everybody. If you’re interested in beer, you will learn the origin of each style, when and where they were developed, and the economic reasons for the success and popularity. If you’re interested in corporate histories, the consolidation of the American beer industry is a perfect case study, and the chain of events in which two family beer companies in Belgium—Jupiler and Stella Artois—merged in 1987 and went on a binge of mergers and acquisitions that culminated in a hostile takeover of Anheuser Busch two decades later is the stuff of business lore. It eventually caps the history of consolidation of brewing with this nugget:

In 2016, AB InBev merged with SABMiller, which means one corporate entity [is] earning half of the total global beer profits and producing one in every three pints of beer sold worldwide.

But, if you’re interested in small business and entrepreneurship, or the traditional craft of brewing, the resurgence in craft beers and smaller scale breweries is fascinating, complex, and evident all around us (there are now four local breweries within one mile of our office). If you’re interested in marketing and advertising, beer brands have practically defined its postwar development. If you’re interested in politics, there is a wealth of it, from how taxes built empires and funded wars to how beer production helped Eastern Europe transition out of communism. You’ll also learn why beer is increasingly popular in places like Russia and China, which aren’t traditionally beer-drinking countries. And, if you’re just interested in human beings and their remarkable stories, the book is loaded with them—from how a milkman saved the traditional white ales of Belgium, to the beer barons of London, to those that started the craft movement in America.

I was initially drawn to Swinnen and Briski’s book because we hail from a city synonymous with beer, but it turns out that, from the cradle of civilization to the current era of corporate hegemony and the craft resurgence, beer is a mirror that reflects the world. 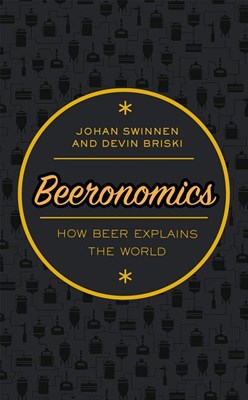 Beeronomics: How Beer Explains the World