We are all figuring things out as we go along to some extent, and that is a good thing. The more we realize this and embrace it, the easier it is to develop a creative process that leads to small wins and the ability to build on one toward the next to make big change. 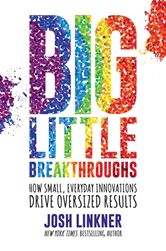 You may not think of yourself as a very creative or innovative person. Most of us don’t—and we don’t believe there is much we can do to change that fact. But it was also assumed, a very short time ago, that our brains stopped developing after a certain age, that brain cells couldn’t regenerate, that our cognitive ability was basically fixed once we reached adulthood. We now know that assumption to be false, that new neural networks continue to form, reorganize, and make new synaptic connections, that our brains can continue to evolve and develop even in old age—especially if we have a consistent cognitive practice in place to make sure they do. Building on findings in the brain’s neuroplasticity, Josh Linkner has coined the term INNOplasticity to describe how our creative capacity isn’t as set as we might assume, either. As Linkner explains it:

Innoplasticity is a fancy way of saying that your creative potential is far greater than the creativity you had at birth, in eleventh grade, or even now. All of us can cultivate and improve our imagination, the same way brains … can transform for the better. […] And these changes can happen much faster than you might think.

From the “five components needed to form an idea” to his Five-Minute Creativity Workout, you’ll find a lot of practical, immediately actionable ideas to exercise your own creativity as you learn from the examples he shares from others. The stories he tells come at you in quick succession and are often called back and folded into different parts of the book. The examples go well beyond business and span the globe. From the daily practices of artists to examples of innovation in higher education and even government (the the DMV of all places), from electric motorcycles to hospital scrubs, popstars to mortgage brokers, lowering drug costs to selling tee shirts, from the latest neuroscience to the odd habits of long-dead writers, the pace is fast and what’s coming next is never expected.

Linkner himself is a successful entrepreneur and investor, having started five tech companies of his own and helping launch hundreds of others (not in Silicon Valley, but in Detroit) as a Founding Partner of Detroit Venture Partners. He is also an artist—and not just because he is an accomplished jazz guitarist who has performed with groups as diverse as a Cajun zydeco accordion band and a soul and funk group—in which he was thirty years younger than the rest of the band, the only Caucasian member, and required to deliver spoken word lyrics as well as play guitar—but because he has trained himself to think and act like one. Contrary to popular opinion, that does not mean having your head in the clouds as much as it requires you having your feet on the ground, establishing daily rituals and a systematic approach. It also doesn’t require coming up with one mythical breakthrough idea, but in being prolific in producing many ideas to try out and test out as you go. The initial ideas we form inside our heads, he has found, do not usually survive impact with the outside world:

The majority of value, in fact, is created as the idea evolves. One idea leads to another idea that morphs into something altogether different. Conceptual ideas only come to life through hundreds of Big Little Breakthroughs, which can only be discovered once you’re in hot pursuit.

With the right mindset and a daily creative practice, that pursuit will lead you down a path that is different than those tried before. Even in the seemingly stolid world of mortgage brokerage, Linkner uses the example of Matt Ishbia and United Shore Financial Services to discuss Ishbia’s “philosophy of being different by design” and the company’s pursuit to “dominate by being different” Not only did he come up with and succeed with a business model most thought would never work, which you’ll read about in the book, Ishbia drilled down into the everyday fundamentals of the business to see what he could do differently than others. For example, to help filter out the five thousand job applicants they receive every month, they sit interviewees near security people as they wait, who are asked to engage them in small talk and share notes with the recruiting team on how they respond. If the candidate feels superior to security and blows them off, they know they are probably not a good fit for the company. (Another innovative interview example in the book comes from Menlo Innovations, where they pair candidates together in interviews and tell them their assignment is to get the other person called back a second interview.)

Throughout the book, Linkner returns to how to foster creativity as an individual. He shares studies that show how experiencing awe, eliciting empathy, cultivating weirdness (or unusual frames of mind and unexpected, even bad ideas), intentionally limiting your resources (or erecting some creative constraints), or simply going for a walk can boost a person’s creativity immensely in the short term. It comes back to the core message of the book, which is that “a person’s creativity is not fixed but instead can be influenced by external factors.” As Linkner puts it, it is less like one’s height—which is fixed after a certain age—and more like one’s weight, which fluctuates and is influenced by our behavior. We are all used to the idea that we get less creative as we get older, that the spark of creativity is often extinguished over the course of our formal education. What he suggests is that, as Dr. George Land wrote all the way back in 1958, “non-creative behavior is learned,” and we can shed the pounds of our non-creativity with consistent creative exercise. And it has never been more important to do so, as there has been a shift in what skills are most valued in the marketplace:

In fact, a flip-flop has been brewing at a massive scale. Growing up, we were taught that hard skills were the golden ticket, only to discover most skills in that category have become automated or commoditized (I guess they weren’t that “hard” after all). We were taught, on the other hand, to ditch the soft skills relating to our imagination in the pursuit of “real work.” The truth is, these skills are the ones in highest demand and most correlated to financial gain, high performance, and maximum impact.

So what does it all have to do with Frogger, a video game from his younger years he still seems unusually obsessed with and returns to throughout the book? Speaking of his “amphibian inspiration,” he writes:

His message is clear: develop creative skills in order to keep hopping ahead, or risk losing it all. Standing still is outrageously dangerous, while high-frequency, controlled creative steps deliver a clear and much safer path forward.

We are all figuring it out as we go along to some extent, and that is a good thing. The more we realize this and embrace it, the easier it is to develop a creative process that leads to small wins and the ability to build on one toward the next to make big change. It doesn’t matter what size company or ambition you have, what field you’re in, or how creative you think you are—the important part is that we all get to work on “cultivating a habit of daily creativity.” There are plenty of lessons for larger organizations and team leaders, as well, ranging from the importance of diversity to why the worst advice in the world is “if it ain’t broke, don’t fix it,” but it all comes down to the fact that “the most world-changing innovations are nothing more than a collage of tiny creative acts.” Indeed, each of us, and the collage of tiny acts we make, are what all human breakthroughs are made of. 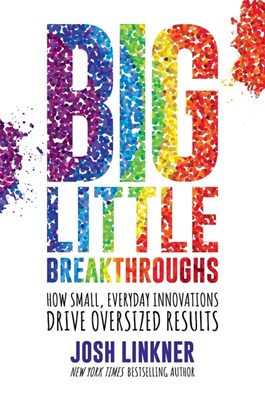