W. Chan Kim and Renee Mauborgne are back with a new book about how to implement blue ocean strategies. Traditionally, there are two primary ways to outdo your competitors: provide more value, or lower costs. But what if you could do both, by rethinking the market, or even better, by creating an entirely new one? That is the topic of W. Chan Kim and Renée Mauborgne’s great new book, Blue Ocean Shift.

This new book digs deeper into the process of instituting such a strategy, and making the shift from red to blue. There are three key components to doing so successfully:

Adopting a blue ocean mindset may not be as easy as it sounds, because it requires letting go of preconceived notions and best practices that are likely ingrained in the industry and organization you work within. In order to do that, you have to think differently and expand your perspective, which can feel uncomfortable—even risky.

The next step is to do things differently. The tools for that, to go about the transition from red ocean to blue, were introduced in Blue Ocean Strategy. But, having spent time helping others make that transformational journey and witnessing things that can get in the way since then, they have refined and perfected the process, and dive deep into those details with you in this book.

The third and final component is wrapped up in the first two, and it took them some time to define:

The longer we thought, the more clearly we could see that there was something about this process that recognized people, acknowledging their fears, their insecurities, their need to be treated with dignity, their desire to matter. We struggled to figure out what word could capture this something and best describe it. The closest we could get was that we came to term humanness.

Although each component is complementary to the others, I would say this one is wrapped up in the first two because it really defines the mindset, tools, and guidance of the process. Because it isn’t enough for the people at the top of the organization to adopt a blue ocean mindset, the whole organization must be willing to abandon the status quo. It is the people “on the ground” that will make up the teams established, that will wield the tools employed, and that will drive the strategy and the process of change you are guiding. In doing so, their creative vision and competence grows, adding even more strength to the organization in the process.

There’s a lot of ballyhoo about creative destruction and disruptive innovation in business today—and the authors coined the term disruptive creation to square the two, and define how the play out in market creation. But they also focus on nondisruptive creation—creating new market space without disrupting an existing market at all. The most popular and well-known stories of this process tend to entail the introduction of digital technology these days, but we should not mistake Silicon Valley for the Blue Ocean. In fact, one of the best examples in the book comes from Kimberly-Clark, specifically Kimberly-Clark Brazil, which introduced a blue ocean transformation in, wait for it… toilet paper! After holding a blue ocean fair (don’t worry, you’ll learn all about it in the book), the company decided to proceed with three of their blue ocean strategies all at once: using a more eco friendly fiber, adding a simple, yet strong handle to their packaging to make it easier to carry, and vacuum-packaging the rolls so it takes up less space when stored in the home—taking up less room in transport and on store shelves, to boot.

There’s also a widespread assumption that you need to be an entrepreneur to create a new market. We know, in fact, that creativity in finding new markets for existing businesses are key to keep them existing:

But for market creation to be an integral part of an organization’s strategy, it cannot be a random, high-risk endeavor, conducted through trial and error. It needs to be a reliable process that can be reproduced. Without that, as much as organizations may need to make market-creating moves, they will continue to shy away from investing accordingly.

So it needs to look very different than the typical entrepreneurial journey, replete as it is with risk and uncertainty. It doesn’t matter how big—or small—an organization you’re in, what sector you’re in. It just matters what mindset you’re in.

What does the National Youth Orchestra of Iraq, Group SEB’s Actifry, and the Malaysian government’s Community Rehabilitation Program all have in common? One makes music, one makes fried food, and one makes prisons less crowded. But each did so by rethinking fundamental assumptions and conventional wisdom in the fields they work in. Each decided that, instead of competing on existing metrics using traditional methodologies and best practices, they were going to find a new way to achieve the ultimate goal of their organization. In doing so, they moved from competing with others in a win-at-all-costs, zero-sum game, capturing value to creating new value in the world. The benefits of blue oceans are, therefore, both economic and social.

In short, we are all paying for the red oceans around us. To turn things around, we need to produce more creative strategies that unlock new value-cost frontiers and with them profitable new growth horizons. We need blue ocean shifts.

Blue Ocean Strategy introduced a revolutionary concept to the world. Blue Ocean Shift teaches the reader how to conceive of and select, staff and test blue ocean opportunities. It is an update on how the revolution is going, and a prescription for its future. 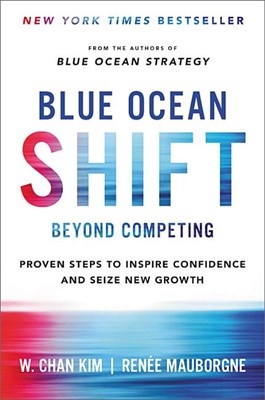