Zephyr Teachout explains how monopoly power is a form of government—and a form of tyranny. 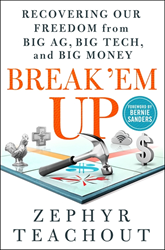 Break 'Em Up: Recovering Our Freedom from Big Ag, Big Tech, and Big Money by Zephyr Teachout, All Points Books

Mergers are notoriously difficult to pull off. A 2011 paper by Clayton Christensen and others in the Harvard Business Review put the failure rate of mergers and acquisitions “somewhere between 70% and 90%.” But consolidation continues unabated, because it has one huge benefit: the concentration of power. And it is not just market power, but political power. We often view corporations as greedy, as driven purely by a profit motive, and tend to assume they are uninterested in political power, even as the amount of money they spend on lobbying politicians suggests otherwise. And while the political divisions among us seem as wide as ever, and partisan debate consumes most of our attention, the power they are amassing is only increasing. Zephyr Teachout shares these staggering numbers in her new book, Break ‘Em Up:

In the last eleven years we have allowed over 500,000 mergers worldwide; mergers in the last five years were valued at an annual average of $4 trillion.

If, as some of the brightest minds in business literature have shown, most mergers fail, why is there such a large movement toward such consolidation? The answer is simple: control. Eliminating competitors allows the largest corporations to control not only the markets they operate in, but our very behavior.

Facebook has the power to determine which newspapers thrive and go which go bankrupt; when Zuckerberg changes his mind he changes what we read, and even how we think. When Wener Baumann, CEO of Bayer—formerly Monsansto—decided to try out a new form of crop rotation, tens of thousands of farmers must go along with his experiment or face bankruptcy. Pfizer exercises a capricious power that we would never permit in a government agency; when it decides to hike up insulin prices before an earnings report, or just to test a theory, people die.

The list continues. And even though we would never allow such power in a government agency, Teachout explains how monopoly is another form of government—and a form of tyranny. When we fail to regulate the behavior and size of such businesses, they regulate our behavior. These corporations “exert control over our everyday lives”—how we work and what we’re paid, what we eat, see, read, and even think.

She begins by showing how deregulation of farming in the 1980s led to a wave of mergers and buyouts that has left only a few companies in control of the entire industry. These big ag corporations have driven up the costs of farming while decreasing the share of profits farmers make, and taken away their agency in the process. Not only have farmers’ share of the profits from every dollar we spend on food fallen from 40 cents in 1985 to 15 cents today, the corporations they sell their products to dictate every aspect of their business down to the watering schedule, and even the conversations they have with their neighbors (they are forbidden by the arbitration contract the are forced to sign from discussing how much they are paid for their products). This has all led to a mental health crisis in farming communities that is now so widespread that, as one farmer tweeted recently, you are sent “suicide prevention help with your paycheck.” The best suicide prevention they could offer is a larger paycheck, and control of their lives and businesses back. Prices once set by more open and transparent markets are now controlled by a handful of powerful and opaque corporations, and “70% of farmers make less than poverty wages” today. And, though it is often sold as a chance to control our own schedule and our own work, the gig economy operates on the same monopolistic principles that leaves workers similarly powerless. It is all done in the name of efficiency and lower prices, but it has come at the cost of personal agency and lower wages.

We are often told that we have power as consumers to change things, but Teachout suggests we use our power as citizens. Countering the popular advice that one must “Vote with your feet” and “Vote with your wallet,” Teachout suggests our embrace of “ethical consumerism is frankly dangerous.” Not only is it still consumerism, but the solution to corporate behavior we find unacceptable should not be shaming them, but ending it through legislation. If a social media platform allows politicians to lie in political ads to get elected, and allows forgeign interference in our elections, the answer should not be that we need to boycott the platform. The answer needs to be that laws are passed to prevent it from happening. It also needs to be that companies are broken up, so that they don’t have that much power in the first place. Consolidation in Silicon Valley is so great that the prevailing business model is not to build an independent company, but to be acquired by a handful of big tech companies. The internet was once sold as breaking down the barriers to business, but it is now controlled by big business, and entrepreneurship is in decline. Two of the largest corporations in the world, Facebook and Google, take in nearly 70% of all digital ad dollars, decimating the news industry whose content they relied on to build their business in the process. And the main thing they are selling to advertisers is the data of the people who use their platforms—which is most of us. We have essentially traded an ecosystem of local news for two large information monopolies with control over what we see and read and buy:

[F]ailure to regulate the advertising duopoly of Facebook and Google has allowed them to grab control over media and centrally edit the flow of information.

Their businesses are also overwhelmingly white and male—far more so than even traditional corporate America, which has at least made efforts on diversifying—and many of their algorithms have been shown time and again to be inherently racist. Teachout has an entire chapter on “Race and Monopoly Power,” including how it crowds out minority-owned businesses and amplifies already entrenched power structures.

The good news is that we have the tools to change all of this, using our power as citizens and antitrust laws already on the books, and we have done it before in our history. After years of bipartisan silence on these issues, and support for industry consolidation, there is now a movement beginning to take shape against it. There are calls, even in Congress, to begin breaking up these monopolies and their power. In that movement is our hope for economic and political change, and for a restoration of our own political power. But we have to claim it. Teachout lays out what is at stake, and what is possible if we do the work to build moral markets.

With a major, grassroots anti-monopoly movement, we can radically reshape our economy and democracy in the service of human needs. We can have affordable drugs. We can have a wide-open seed market that isn’t connected to a fertilizer market. Farmers can reclaim the right to fix their own tractors, and taxi drivers can get a decent wage. We can have an economy where business owners make a profit but aren’t governed by profit maximization. We can have basic communications infrastructure that doesn’t rely on targeted ads and surveillance. We can even have an economy made up of worker-owned co-ops and unionized corporations, small- and medium-sized businesses, and substantial local ownership, if we so choose. We can have a moral economy. But none of this will happen until we end monopoly government.

Talking about breaking up monopolistc corporations (and Teachout provides a list) is often seen as simply bashing business, or to be against the free market, even capitalism itself. But the only way to have a free market is to not let them be monopolized. Taking an anti-monopoly stance is not only to be pro-democracy, it is pro-business, as well. I for one fully agree with Zephyr Teachout. Let’s break ‘em up. 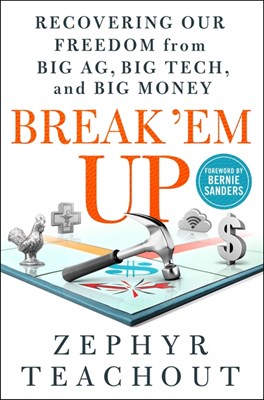