California Burning: The Fall of Pacific Gas and Electric—And What It Means for America's Power Grid

Katherine Blunt's new book looks at energy production and infrastructure in the US, showing us the human cost when it fails and looking at the challenges we must confront in an age of climate change. 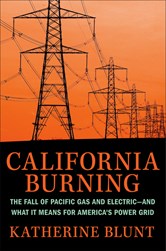 California Burning: The Fall of Pacific Gas and Electric—And What It Means for America's Power Grid by Katherine Blunt, Portfolio

Nuclear energy was in the headlines this week. As the IAEA finally made it into the Zaporizhzhia Nuclear Power Plant in Ukraine to examine potential damage done to the facility by Russia’s ongoing war of aggression there, California state legislators endorsed a plan to extend the life of the Diablo Canyon Power Plant in coastal San Luis Obispo County, roughly halfway between Los Angeles and San Francisco. Diablo Canyon’s pair of nuclear reactors were scheduled to close beginning in 2024, but in the era of climate change, a plant that produces six to nine percent of the state’s electricity—California’s single largest power source—without producing any emissions is a hard thing to let go of. The plant is now slated to remain in operation until 2030. That may very well be the right decision, but after reading Katherine Blunt’s California Burning I am torn. Blunt makes clear the challenges we face as climate change puts greater stresses on the power grid—stresses that nuclear energy could help relieve—but she also documents in great detail the less-than-stellar safety record of Pacific Gas and Electric, the company that owns and operates the plant. Oh, and the plant also sits near the fault lines along California’s coast, prompting Friends of the Earth, a nonprofit environmental advocacy organization, to take out ads warning that “one earthquake could expose millions to radiation.”

Blunt’s book doesn’t have a whole lot to say on nuclear energy, but it has a lot to say about PG&E. The story of the company largely mirrors the story of American capitalism, a tale of nearly unfathomable progress and often unscrupulous people in pursuit of profit. In the 1990s and early aughts, it was a story of deregulation and profit maximization, which PG&E and the energy sector in the state of California epitomized. In PG&E’s case specifically, it is also the tale of two disasters: the explosion of a natural gas pipeline in San Bruno, south of San Francisco, that killed eight people, and the Camp Fire that leveled the town of Paradise, in which eighty-four people burned to death. These tragic events, combined with the intimate profiles Blunt paints of the victims, those who worked within the company, and the people who investigated the events that led up to the disasters, makes this book a human drama rather than a cold, company portrait or history. But it also an examination of the systemic issues that we face in the era of climate change, and a series of disastrous decisions that created chaos in California’s energy markets and infrastructure. The single most dramatic development came when California deregulated its energy sector and invited the likes of Duke Energy and Enron into a Power Exchange to buy, sell, and deliver electricity in the state.

60 Minutes re-aired their February piece on the vulnerabilities of the US power grid on Sunday night. It begins with an account of the 2013 attack on the Metcalf electrical substation in California, in which a team of gunmen damaged 17 transformers and caused more than $15 million worth of damage. The people behind the attack have never been caught. Watching it was more than a little unsettling, especially since I was in the middle of reading California Burning at the time. The Metcalf substation is owned by PG&E. But I could not help thinking that the people behind the attack, whoever they were, did less damage to the citizens of California than Enron did during the heyday of deregulation. “It was,” Blunt writes, “one of the most complicated heists ever undertaken in California.” It is so complicated that I won’t attempt to relay the details of it all here, or the even more convoluted details of the California Power Exchange that oversaw the state’s deregulated market. What I will relate is the following episode that occurred at the height of an energy crisis that resulted in rolling blackouts in 2001:

On January 16, as the grid operator pleaded for Californians to conserve power, an Enron trader identified only as Bill called up a coconspirator named Rich, who oversaw a small plant in Las Vegas.

Bill III then asked Rich if he could take the power plant off-line the following day, just before the afternoon surge in demand. “We want you guys to get a little creative and come up with a reason to go down.”

Rich replied that he could idle the plant under the guise of inspecting a switch on a steam turbine. The electrician of staff could check it that evening, and find cause to check it again the next day. The plant would suddenly go down for maintenance at a time when it was supposed to supply power, forcing the grid operator to pay huge amounts of money to replace its output.

PG&E was forced to “cut power to half a million households and businesses in parts of Nothern and Central California,” and the Power Exchange suspended their trading privileges. Enron traders—who were later caught talking on the phone about the “money [they] stole from those poor grandmothers in California”—raked in the ill-gotten gains. Fortune magazine had recently named Enron the “Most Innovative Company in America" for six years in a row. But as the “innovation” Enron had to offer upended energy markets through deliberate manipulation, there was an older danger lurking in the Feather River Canyon.

In 1987, PG&E issued a bulletin to employees about its inspection and patrol policies. The company’s engineers had become aware of an issue involving the erosion of hooks that held up power lines in remote areas of the state like Feather River Canyon, where the Caribou-Palermo transmission line ran, and “PG&E supervisors, aware of the potential hazard, distributed photos of the worn hooks to troublemen in every region for training purposes.” In addition to inspecting the lines from the ground once a year and by helicopter twice a year, these company guidelines required inspectors to climb five percent of towers each year so that “each structure would be inspected at close range at least once every twenty years.” Unfortunately, that policy did not remain in place. As Blunt reports:

The 1987 policy remained in place until 1995, as the company slashed head count and cut spending in preparation for deregulation. The new guidelines substantially reduced inspection frequency for transmission lines. Requirements for the Caribou-Palermo changed from three inspections a year to one ground inspection and one helicopter inspection every two years. Climbing was no longer routinely required.

The 1995 policy was revised in 2005 … Under the new policy, the Caribou-Palermo would be inspected from the ground only once every five years.

On the morning of November 8, 2018, a worn hook on the Caribou-Palermo line broke and dropped a high-voltage wire onto the dry brush below. Blunt paints a scene of the tragedy that ensued:

Within an hour, the fire had spread seven miles, burning through the small mountain communities of Pulga and Concow to arrive at the outskirts of Paradise, a tight-knit town of nearly twenty-seven thousand people nestled in the Sierra foothills. Residents awoke to emergency evacuation orders as softball-sized embers collided with dead trees. The fire was entirely out of control. At its fastest, it engulfed eighty football fields a minute, but some estimates. The tortured evacuation process began as thick black smoke took on a hellish orange hue. Escape routes became choke points, lines of cars inching along melting asphalt.

Dozens of people were left behind, unable to escape for reasons that made their gruesome deaths all the more tragic. Many were in their seventies and eighties. One man had only just gotten his wheelchair out the front door. Another abandoned his wheelchair and tried to drag himself along the ground. A couple in their sunset years died together in their recliners, holding two dogs and two cats.

Eighty-four human lives were cut short that day—all because a public utility had decided to cut expenses in pursuit of higher earnings. It did so by neglecting the maintenance of its own vital infrastructure.

It turns out the hook that failed “had been purchased for 56 cents in 1919.” I am not sure what a similar hook costs today, but the settlements PG&E reached with public agencies and insurers in the aftermath of the fire exceeded $12 billion. The lives lost, of course, you cannot put a price on.

Reading about all of this reminded me of a book by Lee Vinsel and Andrew Russell, The Innovation Delusion, in which they write about how “Maintenance and care are essential, yet they are regularly neglected.” In that book, they even cite PG&E, relaying how, “In April 2019, a federal judge in San Francisco criticized one of California’s power providers, PG&E, for paying out $4.5 billion in dividends to shareholders while neglecting routine maintenance.” They write in the book about how:

To create a prosperous society centered on human flourishing, we will need to make sure that all citizens have access to basic goods, including modern infrastructure; that the people who take care of our society are adequately compensated and cared for; and that we allocate enough resources to preserve the physical structures and wealth that we have already created, things that can become degraded and lose value and efficacy if neglected.

No one is anti-innovation, and the energy industry needs a lot of it, but it needs innovation in its infrastructure, not its accounting practices. Unfortunately, what the authors of The Innovation Delusion call innovation-speak—which “at its worse … actively devalues the work of most humans, especially those who do the dirty work that keeps our technological civilization running”—and the quest for higher earnings undermined any impetus within PG&E to take care of people and the infrastructure they relied upon. As Blunt writes:

Maintenance money came out of the expense budget. Minimizing these costs—by either reducing them or attempting to shift them into the capital budget—had the potential to benefit shareholders, and the grand jury uncovered evidence that the company had for years attempted to do both.

The mention of a grand jury above suggests that I have barely scraped the surface of the story Katherine Blunt tells in her book. There is so much more to learn, starting with the deeper history of both PG&E (you’ll learn exactly where that worn hook came from) and the broader energy industry in the US. It is also a look at the challenges the industry faces in the age of climate change. One of the most impactful solutions right now is one of the simplest: burying power lines where they can’t spark massive wildfires. Ending on a hopeful note, undergrounding is an expensive overhaul that Patti Poppe—who became CEO of PG&E early last year—is committing the company to. In an equally encouraging move, Poppe recently announced that California Burning will be required reading for company leaders.

Its analysis is unsparing, and its emotional punch may knock the reader over at times, but I think those that do read it will come away more fully informed and inspired to take greater care of the people they serve and the vital infrastructure they oversee, including—perhaps especially now—that pair of nuclear reactors at Diablo Canyon. 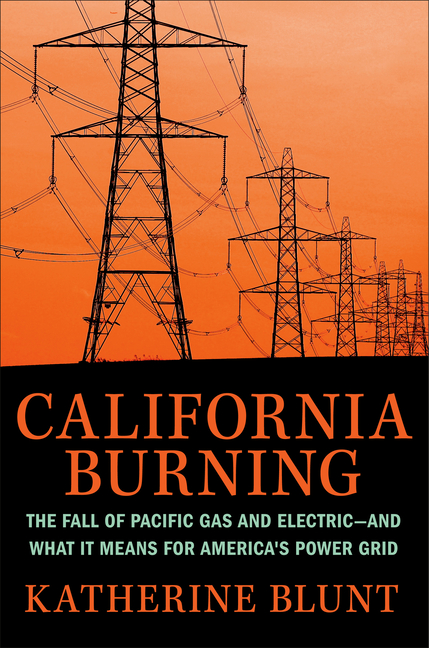 California Burning: The Fall of Pacific Gas and Electric--And What It Means for America's Power Grid