Caste: The Origins of Our Discontents

We have inherited and continue to live in a caste system, one that was built on and is still based on an arbitrary difference between people—the color of their skin. 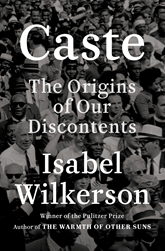 Caste: The Origins of Our Discontents by Isabel Wilkerson, Random House

I was half-heartedly listening to the news while doing the dishes not long ago, as the 4th of July weekend approached, when my ears perked up at a Senator from South Dakota defending the idea of gathering a large group of people together in the middle of a pandemic for a fireworks display at Mount Rushmore. After being challenged by the show’s host as to if it was safe, he wondered aloud why people thought the gathering was a bad idea when they found it acceptable for people to be protesting in the streets. During the interview, he said something to the effect of “why is it okay to gather to protest America but it’s not okay to gather to support America?”

It is both baffling and telling that one of our society’s most powerful people, one in a group of just 100 senators, would describe protesting police brutality against African Americans and calling for an end to white supremacy as “protesting America,” while watching gunpowder explode over the heads of four dead presidents, whose images were carved with dynamite out of the sacred land of its original inhabitants, as “supporting America.”

In Isabel Wilkerson’s view and telling, it is an old house we have inherited, the Matrix we live within but cannot see. She deploys these apt metaphors and her great literary talent alongside deep scholarship to expose an underlying reality of American life: our caste system. It is a reality that has been with us since before the war fought for this country’s freedom and independence, and one that has lingered since we fought a civil war over extending that freedom and independence to everyone regardless of race, which remains unfinished. It is a reality I was unable to see even after I’d learned that the very idea of race is an invented concept—a social construct rather than a biological reality. And because I couldn’t see the reality Wilkerson lays bare, I’ve not been able to make complete sense of the country or times I live in. I’ve thought that, perhaps, it was because the times themselves don’t make much sense. But it is, in fact, because we’ve built a social reality based upon a scientific and spiritual lie.

The reality is that we have inherited and continue to live in a caste system, one that was built on and is still based on an arbitrary difference between people—the color of their skin. Slavery has existed throughout human history, but never before in the form it took here after a ship destined for the Spanish colonies ended up on the shores of Virginia in 1619. The only cargo on board were captive human beings from Africa. In that moment, a dreadful deal was struck that began a quarter millennium of unspeakable atrocity. The very concept of race was invented by colonial powers to justify it, and it has had an insidious history since, buttressing not only that race-based system of slavery for twelve generations, and burrowing into the American psyche and landscape ever since, but extending itself into some of the worst atrocities of the last century—those of Nazi Germany.

Wilkerson explains the troubling but telling history of Nazi Germany’s Nuremberg Race Laws, and how, when the first meetings were convened to draft them, they turned to the “anti-miscegenation statutes and race-based immigration bans” of the United States as their example. Some of the Nazis in attendance actually believed America’s race laws went too far, and argued for a more moderate approach. A few found them so extreme that they didn’t believe American states actually enforced them. They did. And the scenes of lynchings that haunt (one section in particular) of this book haunt our history:

African-Americans were mutilated and hanged from poplars and sycamores and burned at the courthouse square, a lynching every three or four days in the first four decades of the twentieth century.

And it wasn’t just the Jim Crow laws of the South that they turned to, but to the ideas of racist “intellectuals” in the North. One of the main books the Nazis used to indoctrinate themselves and their youth in hate ideology was written by New England–born and Ivy Leauge educated Lothrop Stoddard in 1922, a eugenicist who even “sat in on Nazi sterilization trials and commended the Nazis for “weeding out the worst strains in the Germanic stock.”

In addition to examining the (thankfully derailed) attempts of the Nazis, Wilkerson brings our own caste system into sharper focus by comparing it to the one that has existed in India for millennia, a fascinating throughline in the book that could be the subject of an entire review of its own.

But the comparison I keep thinking about is how she likens the entire developed world to an old house built on faulty foundations. Those of us who live in that house may not be responsible for the underlying flaws in its original construction, for the cracks in the floor or bows in the walls that have appeared since, but we are now responsible for preventing its further deterioration, to address the critical errors made when it was built to keep it from falling down around and upon us. As she writes:

Not one of us was here when this house was built. Our immediate ancestors may have had nothing to do with it, but here we are, the current occupants of a property with stress cracks and bowed walls and fissures built into the foundation. We are the heirs to whatever is right or wrong with it. We did not erect the uneven pillars or joists, but they are ours to deal with now.

And any further deterioration is, in fact, on our hands.

It is a house with bad bones, and the decay is moral at its core, but it affects us all materially, and even those of us in the dominant caste are ultimately worse off for it—both ethically and economically. Imagine a world in which we weren’t stifling the creativity, talent, and economic potential of so many of our people. The economy we have inherited from our ancestors was built on slave labor, and concentrated wealth in the hands of a few powerful people. What if, from the beginning, that wealth was allowed to flow into the hands of more people and put to use building self-sufficient and innovative communities instead of plantations? How good would baseball have been, Wilkerson ponders in one thought experiment, had Satchel Paige been allowed to play in the major leagues during his prime? Extend that thought to all of American life, and business, and culture, and you can see what we have and continue to miss out on because a small number of people wanted to maximize their profits by forcing others into unpaid labor 401 years ago. And although every new wave of European immigrants met discrimination when they arrived, they each eventually joined the dominant caste by virtue of their not being Black—that is, not by any actual virtue, but simply by not being Black—and rose above those whose labor built the foundation of the economic success they were themselves able to participate in. In America, they became something they’d never been before: white. They lost their accent as quickly as possible to assimilate into a caste system that they would be atop of, just as more recent African and Caribbean immigrants have tried to retain their accents in an effort to not fall to the bottom of it. The dominant caste set it all in motion:

To justify their plans, they took preexisting notions of their own centrality, reinforced by their self-interested interpretation of the Bible, and created a hierarchy of who could do what, who could own what, who was on top and who was on the bottom and who was in between. There emerged a ladder of humanity, global in nature, as the upper-rung people would descend from Europe with rungs inside that designation, the English Protestants at the very top as their guns and resources would ultimately prevail in the bloody fight over North America. Everyone else would rank in descending order on the basis of their proximity to those deemed most superior. The ranking would continue downward until one arrived at the very bottom—African captives transported to build the New World and to serve the victors for all their days, one generation after the next, for twelve generations.

It can be argued that the animosity our caste system has created between our people is also why we have allowed our social safety net to wither, and why we have not been able to implement universal healthcare in America as every other industrial economy on Earth has. Both would be of great use today, as we try to battle the spread of COVID-19 and the economic devastation that it has wrought.

But there is hope. That senator from South Dakota saw the protests in the streets of America as being against America itself, because they were protesting the continuation of white supremacy and Black subjugation—which is protesting the very caste system that defines American society.

But I believe there are even more of us who see those protesting white supremacy and police brutality as protesting for America, to make it live up to its original promise and stated ideals, who believe in our hearts that we all deserve to be free, and that our role in life—and in the life of our country—should not be determined by the way we look, but by what is inside us, and what we have to offer the world if we're allowed to contribute our full potential. I believe we can disentangle what we know is true in our hearts from what is true of our history, and break down the barriers that obscure the truth within us, and the artificially constructed and brutally enforced barriers between us. I believe, if we open our eyes to its existence, as Wilkerson does, we can create a country and a world without caste.