Do Nothing: How to Break Away from Overworking, Overdoing, and Underliving

"We work feverishly to make ourselves happy. So why are we so miserable? This manifesto helps us break free of our unhealthy devotion to efficiency and shows us how to reclaim our time and humanity with a little more leisure." 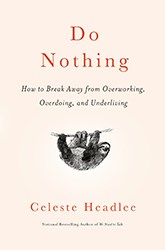 Do Nothing: How to Break Away from Overworking, Overdoing, and Underliving by Celeste Headlee, Harmony

We all have something unique to contribute to the world while we’re here.

Celeste Headlee has found her contribution, in part, by sharing the stories of others through her interviews on public radio. It is experience she drew upon to author her last book, We Need to Talk: How to Have Conversations That Matter. It was (again, in part) about how we have become so consumed with our desire for efficiency that we have failed to stop and ask important questions about the efficacy of our communication. As she wrote then:

We are driven, but we long ago lost sight of what we are driving toward. We judge our days based on how efficient they are, not how fulfilling.

In Do Nothing, she tells us how she had assumed that the financial success and stability she finally achieved after her 2016 TEDx talk went viral—leading to higher speaking fees and her last book—would improve her life. Yet, while it was undoubtedly easier not living paycheck to paycheck, the answer to whether it made her happier and less stressed could also be summed up in a word: no.

But why? To answer that question, Headlee went on a personal journey that led to this book. In it, she provides a great, yet very brief and readable, history of human labor and working hours. She discusses the transfer of power from the working classes as they moved from the countryside and individual craftwork—where most people owned at least a small parcel of land and the means of their own production—into factories where they were dependent on an employer. She identifies this as the moment in our history when time began to be equated with money, where the number of hours worked mattered more than the quality of work produced, and where our working hours increased dramatically. The pride in craft gave way to being paid by the hour. The very meaning of the word “day” changed—from daylight hours to working hours—transformed by the steam engine and electric light. Social mobility stagnated even as the working class worked harder, and our ancestors fought hard to win more humane conditions, better pay, and an eight-hour workday. But the die was cast, and time spent in leisure or play has come to be seen as time not making money, and therefore wasting both time and money. She explains very succinctly how this work ethic and notion of time has been passed down to us today, to the point that most of us feel we don’t have a moment to spare. But she also finds it ironic that we look nostalgically back at previous generations and the amount of idle time they had:

After all, we have microwaves and dishwashers and gas lawn mowers and the internet! We can order just about and get it delivered to our door. We have robot vacuums and AI assistants that tell us the weather and set our alarms. If you add up all the time saved through technological advancement over the past one hundred years, shouldn’t we have hours of excess time in which to do as we please?

A big part of the reason is that, when increases in productivity provided us as a society the choice to either produce more or work less, those with the primary power to make that choice have always chosen increased production. But it is also because we have bought into the notion that “time is too valuable to waste,” that downtime is time flushed down the drain:

When time is money, idle hours are a waste of money. This is the philosophical underpinning of all our modern stress: that time is too valuable to waste. We don’t pass time, we spend it. It’s no wonder that we don’t really have pastimes anymore.

We have, in effect, internalized the capitalist drive for exponential growth, becoming the embodiments of an industrial age factory that never shuts down. Even in our personal lives, we strive for efficiency and improvement in all things. And while that is commendable to an extent, Headlee believes—and makes a very compelling case—that this is doing real damage. We have covered the effects of overwork on the quality of our work pretty extensively in reviews of other books here, but it is worth doing so again. Headlee summarizes it well when she writes:

[W]e’ve known for more than a hundred years that long hours of toil don’t actually increase productivity. We have data on this going back to the 1800s—at the time when unions forced employers to cut hours, factory owners were surprised to find that productivity increased while accidents decreased. Overwork was counterproductive in the days of the sweatshop, and research shows it still is, even in the age of the knowledge worker.

Even the man that popularized the notion of the Protestant work ethic—Max Weber in his 1905 book, The Protestant Work Ethic and the Spirit of Capitalism—later questioned the ultimate outcome of his own conclusions:

Weber said that machinery has come to control the lives of most people, and he wondered if it would continue to determine their lives “until the last ton of fossilized coal is burnt” and the industry that was meant to improve human life would ultimately become “an iron cage.” His concern that we would exhaust our resources and imprison ourselves has been justified. Yet even as we see the disastrous effects of past policies, we’re still told to keep working, just as our parents and grandparents were told.

“Keep working” is what most of us do even after we’ve gained financial stability—even wild financial success—because, after all, if every hour is worth more, we’re wasting even more money while idle. It is something Headlee found herself doing, even as it failed to make her happier or less stressed. Before moving onto why that is bad for us individually and as a society, let’s just pause again to let Headlee explain why taking a pause is so important for the quality of our work:

Repeated studies show that taking time off boosts productivity, creativity, and creative problem-solving. It can even strengthen your immune system, making it less likely that you’ll get sick and be forced to stay home with a cold.

On a more personal note, she documents how overwork was affecting her and how she broke that habit. She goes beyond the anecdotal evidence of her own experience by documenting research on the deleterious effects of digital technology and its overuse—and how it is designed to addict us into such overuse. She examines how our culture of overwork has an unequal effect on women in particular. And, noting that “Many people who are now CEOs and millionaires have worked very hard, no question, but so have millions of people now living below the poverty line,” she explodes the propaganda that we’ve been sold about the literal value of hard work, and exposes the immorality of trying to make poverty a moral issue, asking:

How is it that we produce so much wealth with our labor and yet most of us feel we are barely hanging on to our standard of living, let alone creating a situation in which our children will do better than we’ve done?

She has found the reason is twofold, “a rise in consumerism and a steep rise in income inequality.” This is also something we have covered pretty extensively over the past few years, but no author has put those realities together with the cult of ambition and efficiency and its effect on our everyday labor in quite the way Headlee has. The combination leads to a sense of  agency rather than despair, a set of questions rather than a list of complaints. As she asks:

So what is the real goal? Quickness and efficiency, or thoroughness and deep understanding? […] We strive to achieve peak productivity but forget that it’s taking us further from our ultimate goal—learning.

Speed and efficiency are, by their nature, antithetical to introspection and intimacy. The kind of social consciousness required to get to know another person intimately and to understand the emotional landscape of a community requires time and focus, two things most people don’t think they have.

But we do have time. We simply have to make it rather than spend it. We need to carve out our time more creatively instead of trying to maximize it with efficiency. We need to realize that adding more digital detritus to our already overstuffed calendars is taking away something vital to the human experience—that we can step off the treadmill of overscheduling and overworking, re-enter our analog lives, and live more intentionally.

It doesn’t have to be that way. In fact, it shouldn’t be if we want to do our best work, which is often accomplished by simply taking a break. We all have something unique to offer the world, but if we work so much that we lose ourselves, we lose that opportunity, as well.

The truth is, productivity is a by-product of a functional system, not a goal in and of itself. The question is not whether you are productive, but what you are producing.

We need time to relax and reflect, to be creative, to think and love more deeply. You need time to discover the person you are if you want to offer it to the world. Celeste Headless provides an example and actionable advice for how to do so, and a wealth of evidence for why we should. 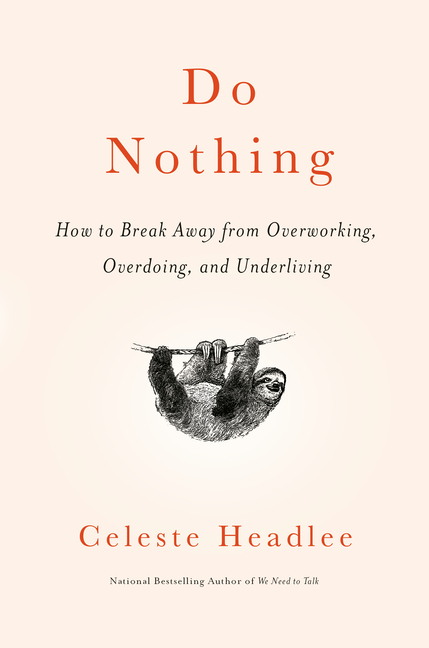 Do Nothing: How to Break Away from Overworking, Overdoing, and Underliving