Kate Raworth has written a beautiful and powerful book about the limits and setbacks of current economic dogma, and provides us with a new model to replace it with. We live in a world that is, in many ways, presupposed. We stand on the shoulders of giants, yes, but we also inherit their ways of thinking, and sometimes it’s necessary to discard the cumulative accepted wisdom of that history and start anew.

Neil Irwin (author of The Alchemists) had an intriguing column in the “Economic View” section of The New York Times last week, asking What if Sociologists Had as Much Influence as Economists? In it, he made a case for a White House Council of Social Advisors to address social issues in the country in the way the Council of Economic Advisors helps shape and address economic ones. But what if social concerns were actually a part of the economic models we used, and other intellectual perspectives embedded in the discipline? What if the basic well-being of people and planet were put at the center of it? What if, instead of other fields being so overwhelmingly influenced by the economic view, economists opened up their minds and incorporated a wider and more holistic view of human nature than “economic man?”

It is this broadening of perspective in economics that Kate Raworth gives us in Doughnut Economics: Seven Ways to Think Like a 21st-Century Economist. The first thing we must do upon entering it is confront our presuppositions in the field:

Pre-analytic vision. Worldview. Paradigm. Frame. These are cousin concepts. What matters more than the one you choose to use is to realize that you have one in the first place, because then you have the power to question and change it.

Raworth warns that, while models form the backbone of economics, we must remain conscious that they are but a “necessary simplification” of the world, and not be lured into believing they are the real world. Dogma and model purists should have no place in the field, because “models,” as statistician George Box said, “are all wrong” even if “some are useful.” When it comes to models:

Rethinking economics is not about finding the correct one (because it doesn’t exist); it’s about choosing or creating one that best serves our purpose—reflecting the context we face, values we hold, and the aims we have. As humanity’s context, values and aims continually evolve, so too should the way that we envision the economy.

Creating a new model ”that best serves our purpose” is the choice Kate Raworth made for herself, and the result of that is Doughnut Economics: Seven Ways to Think Like a 21st-Century Economist, released yesterday by Chelsea Green Publishing. It started, as so many ideas do, by simply sketching it out on paper.

What if we started economics not with its long-established theories but with humanity’s long-term goals, and then sought out the economic thinking that would enable us to achieve them. I tried to draw a picture of those goals and, ridiculous though it sounds, it came out looking like a doughnut …

This is what sustainable development looks like. It is, perhaps not a way to grow GDP at the greatest possible rate, but economists have been pointing out how flawed GDP is for quite some time now—and Raworth makes quick work of it in her first chapter. It is only intellectual inertia that has kept it as the dominant metric. The Doughnut is an alternative, and a model with which we can begin to grow a healthy economy, healthy human beings, and maintain a healthy planet.  And that is what makes it so powerful. Rather than just critiquing the past, she offers us new concepts and a new model of our economic future.

There are seven ways we currently think she suggests we need to change for the 21st century:

First, change the goal. (moving from GDP to Doughnut Economics)

Second, see the big picture. (from self-contained markets to an embedded economy)

Fifth, design to distribute. (moving from the idea that economic growth will eventually distribute gains more evenly to being distributive by design)

Sixth, create to regenerate. (moving from the idea that economic growth will eventually, somehow, take care of ecological degradation to being regenerative by design)

Seventh, be agnostic to growth.

It is that last one that may be the most difficult for economists and, indeed, individual organizations. Raworth describes the basic conundrum, which is also the underlying premise of the book:

We are currently so addicted to growth that it is our only goal, the constant economic “fix” we’re chasing. Economists and politicians would have us believe that our other goals will be addressed if and when we achieve such growth, even as history has shown that high-growth has led to increased inequality and more environmental damage in the past. And Wall Street dogma declares you’re only a successful company if you’re a growing company. Of course, nothing in nature grows forever. That’s not to say growth cannot occur, simply that we need to put other goals first. We need to become growth-agnostic. We need to develop sustainable organizations, models, systems.

This book has real power, in part because its concepts and conclusions have already begun to be put into use. Her Doughnut drawing went viral (as they say) among economists long before the book was even written. In fact, a team helping negotiate the UN’s Sustainable Development Goals in 2015 told Raworth that they had her drawing on the table during late-night meetings hammering out the final text as a reminder to stick to big-picture goals.

But even if it weren’t in the hands of people who are ready to make an immediate impact, it would have power in the clarity and breadth of its vision, and the beauty and strength of its writing. It is really breathtaking at times, the clarity of Raworth’s vision matched by the clarity of her writing on complex topics. Speaking of the limitations of Paul Samuelson’s Circular Flow diagram that formed the visual frame of current economic thinking, she writes:

Its limitations have … been used to reinforce the neoliberal narrative about the efficiency of the market, the incompetence of the state, the domesticity of the household and the tragedy of the commons. It’s time to draw the economy anew, embedding it within society and within nature, and powered by the sun. This new depiction invites new narratives—about the power of the market, the partnership of the state, the core role of the household, and the creativity of the commons.

Putting the sun at the center of the economy is as realistic, and potentially transformative, as Copernicus putting it at the center of the solar system. The quote above comes from the introduction, and foreshadows the terrain she’ll be exploring in Chapter Two: “Seeing the Big Picture.” The way she resets the economic stage there is simply masterful, and will most likely change the way you view the roles of the market, business, finance, trade, the state, the household, the commons, society, power, and the Earth itself in the process.

In relation to the Earth, she encourages businesses to move from “doing nothing” or “doing what pays”—and even beyond “doing our fair share”—to “doing no harm.” To do so, Raworth lays out a vision of regenerative industry, a way in which the city can be as generous to the Earth as a forest, and examples of ways organizations are already working to get there. It is a vision that elevates the gross mundanity of Milton Friedman’s statement that “the business of business is to increase profits” to the example of Body Shop founder Anita Roddick (i.e., an actual, successful businessperson)’s model, which Raworth sums up as “the business of business is to contribute to a thriving world.”

And even though she demonstrably debunked the goal of GDP growth in the first chapter, she comes back to economic history and the idea of being growth agnostic in the end. There, she tells us how even Adam Smith believed that there was a limit to growth:

Adam Smith believed that every economy would eventually reach what he called a ‘stationary state’ with its ‘full compliment of riches’ ultimately being determined by ‘the richness of its soil, climate and situation’.

And other influential economists have been practically giddy about reaching it. Raworth quotes John Stuart Mill:

‘The increase in wealth is not boundless,’ he wrote in 1848. ‘A stationary condition of capital and population implies no stationary state of human improvement. There would be as much scope as ever for improving the art of living, and much more likelihood of it being improved, when minds ceased to be engrossed by the art of getting on.’ And, as if to prove himself no fan of GDP almost a century before it was invented, he added, ‘those who do not accept the present very early stage of human improvement as its ultimate type, may be excused for being comparatively indifferent to the kind of economical progress which excites the congratulations of ordinary politicians: the mere increase of production and accumulation.’

It is about time we not accept "the present very early stage of human improvement as its ultimate type," and celebrate and accelerate a new stage. Raworth has many modern-day stories of individuals and organizations all over the world doing just that.

The purpose of the economy is not its own inexorable growth, but to provide for the basic needs of the people. In an age of increased automation, it is important to put that back at the very heart of economic thinking and models, because it is possible for the first time in history for economic growth to be largely (if not entirely) decoupled from human participation in the economy. And so we must put human life and welfare back at the center of our economic thinking, and ask “what enables human beings to thrive” rather than simply what causes economic growth.

Our current economic thinking, centered around growth, is degenerative and divisive. Doughnut Economics provides economic thinking for the 21st century, an economics of human growth, business and environmental sustainability, and lasting peace. Please read it. 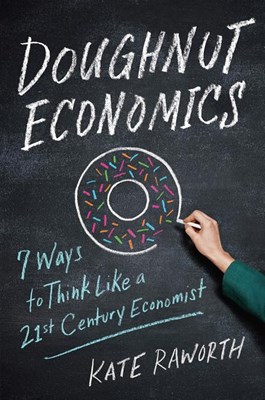