Shane Snow has written a great book about the power of teams that is rooted in the American experience and the better angels of our nature. There is a conundrum, a paradox if you will, to the nature of teams. Our different perspectives as human beings are the best tools we have for creative problem solving, but those very differences in perspective often create problems of their own, and seed conflict among the individuals in an organization. The trick then, is to find a way to gather the insights and wisdom that are inherent in more diverse teams without letting that diversity undermine us. Resolving that dilemma is the task Shane Snow sets for himself in his new book, Dream Teams: Working Together Without Falling Apart

The first thing I want you to know about Shane Snow is that he owns sixteen shares of stock in Activision Blizzard—the company that makes the World of Warcraft video game—which he bought solely out of excitement at their release of StarCraft II. I want you to know this because it demonstrates something I think is very important to his new book: Shane Snow is a gigantic nerd. When he gets into something, he gets really into it—like buy-stock-in-the-maker-of-your-favorite-video-game level into it. That is a great thing for those of us who would like to learn more about the nature of teams, because he has turned that nerdy attention and enthusiasm to that very topic in Dream Teams.

The second thing to know about Shane Snow is that he is the cofounder of the content technology company Contently, which has been named by Entrepreneur magazine as one of the best entrepreneurial companies in America, and a Best Place to Work by Fortune, Ad Age, and Crain’s. So Snow’s interest in the topic of teams isn’t purely academic; he has a personal, and financial, interest in dissecting the paradoxes inherent in teams, and discovering how to build the best one possible. And, judging by the accolades the company he cofounded has receivied, it seems he has at least helped do just that in the real world. Along the way, he’s found that the lessons learned are applicable far beyond business:

[O]nce we understand how it works, the science of Dream Teams is something we can apply to everything. From our personal relationships, to our everyday work, to our businesses and causes, to our communities, and to a world itself that desperately needs us to stop breaking down because of each other, and start breaking through together.

Snow explains how the paradox of teams is embedded in the way we’ve evolved as human beings. Evolution has left our brains wired for empathy and collaboration—it is our ability to work together that has allowed us to build civilization—but it has also left us suspicious and fearful of anyone not in our tribe or “in-group,” those who might come and take what we have worked so hard to build, to grow, to accumulate and store away. This isn’t just conjecture. Snow cites studies of brain scans that show our amygdalae—the part of the brain that perceives danger—is more active when simply shown pictures of people of a different race, people we perceive as different from us.

The science is clear: if our amygdalae are normal, then we all have this “deep-rooted fear toward strangers or the unfamiliar.” The Greek word for it is—get ready—”xenophobia.”

That is an uncomfortable conclusion, to say the least. As an American, living in what has been an historically and systematically racist country, I’ve come to understand that racism is practically a part of the air we breathe, the water we swim in. As a white man, I have had to admit, to myself most of all, that I view people of other races differently, and, living in one of the most segregated cities in America, that I view different neighborhoods differently. Racism is embedded in the landscape, and I am not immune from it—all I can do personally is choose love over fear, to choose unity and association over segregation. It is much harder to come to grips with the fact that xenophobia is, in fact, embedded in our very brain chemistry—and yet also more freeing, because it gives us the deeper understanding that we need to counteract it.

And there are ways to counteract it—one being adding an element of play to our interactions. Playing together makes us members of the same “in-group.” It was the spread of soccer, or futbol, and their shared love of and participation in the game through the city’s many futbol clubs, Snow explains, that allowed the sizable Jewish population of Buenos Aires to move from being seen as feared outsiders—not really Argentinian—at the turn of the nineteenth to being more equal members of society by the 1920s. It is no coincidence, he believes, that Buenos Aires, which “boasts the highest concentration of futbol clubs, and more people play per capita than anywhere else in the world,” also had less ethnic and racial segregation than other American cities. “They were comfortable living together,” Snow asserts, “because they played together.” The national religion of futbol, he believes, gave them a shared identity, even as they held onto their differences. Perhaps that is why Pope Francis, a native Argentinian himself, staged a soccer match (for charity, of course) between representatives of the world’s five biggest religions in 2014.

This is important not just because discrimination, and the systemic oppression that accompanies it, is morally wrong (which it is), but because retaining our individual differences while coming together is the best way to solve problems. Studies consistently show that teams with diverse perspectives outperform even those with the best individual performers. It is through “different combinations of perspectives and heuristics” (basically, our mental shortcuts) that we arrive at the best solution. So, as Snow writes, “when it comes to making progress together, the differences that matter most are the ones inside our heads.”

Still, while cognitive diversity is the most important element of high-performing teams, Snow explains why it’s a bad idea to “use it as an excuse to say that demographic diversity like race or gender doesn’t matter.”

“So,” as Snow surmises, “it turns out that demographic differences end up being pretty good predictors of differences on the inside.”

But we are still bound to get stuck, on both the challenges we’re trying to solve, and in solving the very challenges that a diversity of perspectives poses. The key is to remain committed to airing those differences, to exploring all ideas and perspectives and points of view, and to allow—even encourage—dissent.

Legendary civil rights leader Bayard Rustin, the man behind the 1963 March on Washington, once declared, “We need, in every community, a group of angelic troublemakers.” He was right. We need the dissenters, the whistle-blowers, the critics, and the extreme perspectives to help us get out of inertia … and we need leaders who make it safe for them to do it.

This is how we make progress when we’re stuck.

One of the final things we need is the power of positive stories to “help us learn to love the people we fear instead of shutting them down.” He illustrated this power by documenting the history of Asian Americans and homosexuals in the USA, and how both have gone from being marginalized and oppressed “out-groups” in our national life to being (at least more a) part of the “in-group” through the power of story, and positive—or at minimum neutral, non-disparaging—representations of them in the arts and media.

And this brings me to the last thing you need to know about Shane Snow: that he is a writer, specifically a science and business journalist, whose work has appeared in the New Yorker, Wired, the Washington Post, Fast Company, Time, and GQ. And he is a damned fine writer. He is a gifted storyteller, and meticulous in his craft. The book shares stories that you may have heard before, but in a way in which the ending is not only a surprise, but a revelation—usually multiple revelations intertwined with one another. The tales he spins, and the way he intersperses and folds them in upon one other, makes such a great impression both literarily and, I think, literally on the brain, really embedding the book’s teachings through its intricate web of examples. It is almost as if he’s tucking the lessons he’s offering into the folds of the brain, making them stick with the power of story he empowers us to employ through his teaching.

He explains why Denzel Washington is the best fill-in for Tom Hanks in Hollywood, and why we should think about team building as casting—based on what problem we’re trying to break through. He reveals the origins of the term “private eye,” which isn’t at all the point of the story he weaves about Abraham Lincoln’s (literal) journey to the White House, but one of many delightful tidbits you get just for reading. You’ll read about what made the Soviet-era “Red Army” national hockey team such an unstoppable force for two decades, and how they rekindled that magic years later in Detroit as members of the Red Wings after the Soviet Union dissolved. You get a lesson on the origins of hip-hop as an aside in a story about a different Detroit merger, that of Chrysler with Daimler, and why the Wu-Tang Clan was a better merger than a DaimlerChrysler (an admittedly a low bar). You’ll learn why in mergers, as in marriages, the real problem isn’t in disagreements or arguments, but when a lack of communication—or organizational silence—take hold. He explores, by telling the story of how a painting of a black square changed art history and helped invent the field of graphic design, how even bad ideas can be useful, which now permeates every corner of our modern world. (In short, a painting that said absolutely nothing, and the ideas behind it, helped artists realize that art could say something—beyond a literal representation of reality.)

It is a book boiled in the American experience, not shying away from our own country’s struggles with inclusion and diversity, while calling on the better angels of our nature to embrace it. With as much moral clarity and simple practicality as any book I’ve read in my time here, Shane Snow reveals why hiring for “culture fit” is a really bad idea if it means hiring people that fit in easily, and why hiring for “culture fit” is a great idea if that means the culture values demographic and cognitive diversity, mutual respect, open-mindedness, and a commitment to freedom of speech and the surfacing of different perspectives and ideas—even, maybe especially, dissent—intellectual humility, and unselfishness. Those, to me, sound like quintessentially American values, those on which we founded our ongoing experiment in self-governance, values that are especially important to progress today:

Not only are we now surrounded by our out-groups, but more than ever we need them and the cognitive diversity they bring in order to make progress.

I’d like to leave you with one final thing. Snow mentions research that has shown that:

People who read a book or more a month … are significantly more likely to [have intellectual humility] that those who rarely read.

Reading lots of books means we’re taking in lots of stories about lots of people and things. Is it really a quantum leap to suggest that doing so will give us a little more openness toward the people we meet in everyday life?

No, it’s not, and I’d like to suggest the next book you read be Shane Snow’s Dream Teams. 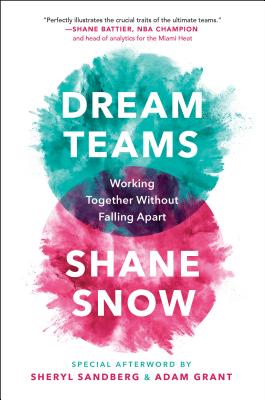